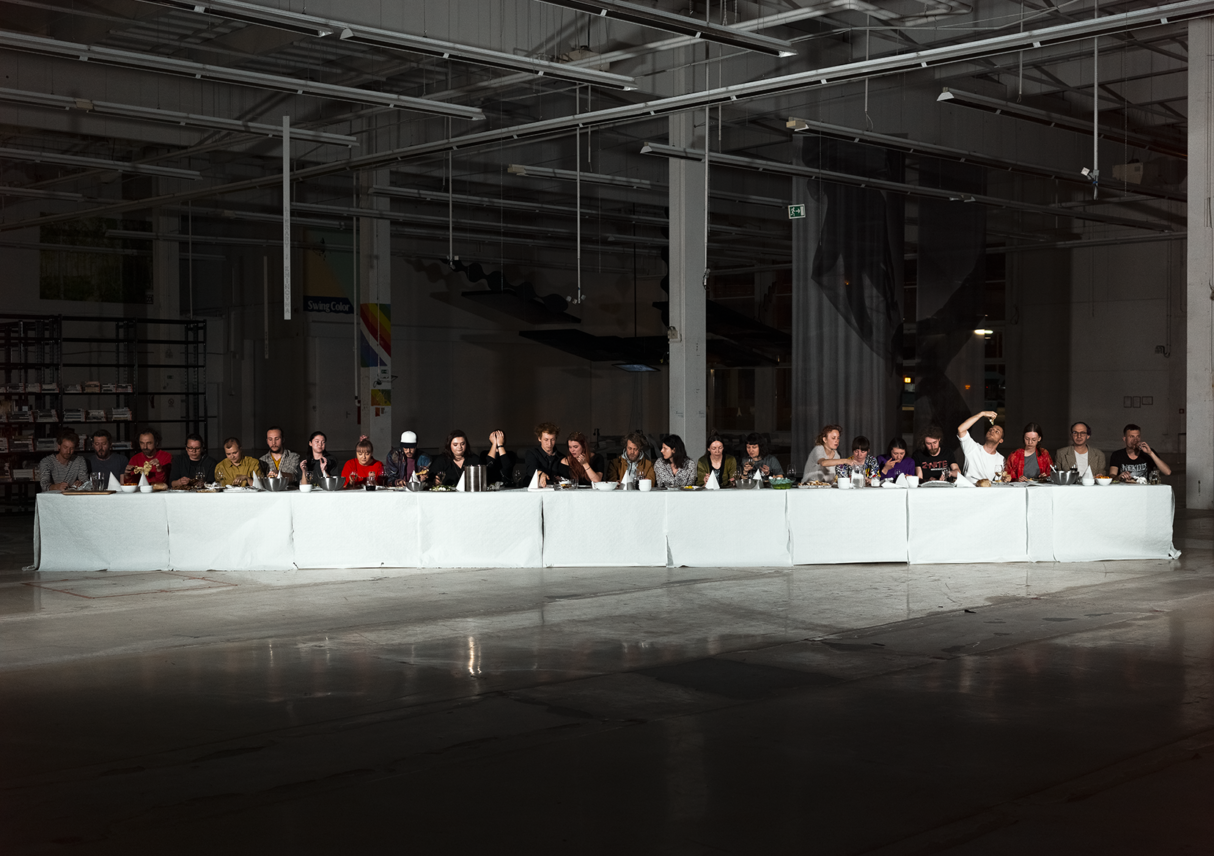 There is no end To what a living world Will demand of you.*

The exhibition There is no end To what a living world Will demand of you* is the result of the work of Studio vvv in the winter semester 2022. From a theoretical point of view, the project is a result and continuation of the previous summer semester 2022, when Martin Piaček was replaced in the leadership of the studio by Mária Hlavajová, a visiting lecturer theoretician and director of bak. basis voor aktuelle kunst in Utrecht. The programme can be briefly characterised as the expansion of the artistic “toolbox” for the needs of the contemporary world, which could be described as a world of permacrisis – a permanent crisis – or better said, a permanent sense of crisis. Can art provide a sense of rootedness in a world of disrupted relationships and information oversaturation? Can it establish an atmosphere of understanding and create viable visions of a world in which we are closer to each other on the nature-culture axis? Most importantly, can it retain a language of critique, wit or subversion?

This is how we want to see visual art in all its forms. As a tool that has the potential to open up unexpected visions. But we don’t want a lecturing, moralising art. No. We are interested in artistic testimony, as a chance to be embraced by a belief in the beautiful, the strange, or even the embarrassing. We see art as a series of practices, very divergent; from activism, to subtle poetics. Lastly, we want to do art honestly and with insight and attention to detail.

The exhibition is a mosaic of individual outputs produced by students and graduates of the intermedia – inter-genre Studio vvv. The form of the exhibition corresponds to the nature of the current semester, using the spaces of Kunsthalle Bratislava in a multi-layered content plane. The placement of the works — object-based, textual and multimedia — aims to respond to the architecture itself in a place-sensitive way, even to subtly appropriate or distort it.

As the title of this section suggests, the method of the exhibition’s creation (and indeed the entire teaching process) is a constant balancing act of both horizontal negotiation and curatorial (pedagogical) vision. As curators, we come up with initiatives and suggestions, while at the same time stimulating a process of collective approval or change for each creative step. The collective is involved in the whole project, all personalities are open to the constant possibility of their own initiative and suggesting a change or a way forward. We believe that this builds a shared experience of the creative process and identification with the final outcome. Horizontality and camaraderie are always necessarily mixed with the rigour of deadlines, commitments and the uncompromising spreadsheets of budgets. Similarly, as in post academic practice.

The Studio vvv (visual-verbal-public) was founded in 2018 by artist and teacher Martin Piaček and graphic designer and artist Dávid Koronczi at the Department of Intermedia of the Academy of Fine Arts and Design in Bratislava. Currently, the artist Petra Nela Pučeková is also working in the management of the studio as a producer. The Studio vvv creates an inclusive and stimulating environment where art is understood as language, commentary and an effort to contribute to both the individualistic and community orientated shaping of the world. We see art as a useful and important part of life, but we are also constantly reminded of its captivating nature, its potential to amaze, and its formal differences from other humanities or creative practices. The word “public” in the studio’s name refers to an orientation towards a practice that carries solidarity with others, visions of better futures and proposals for their creation.