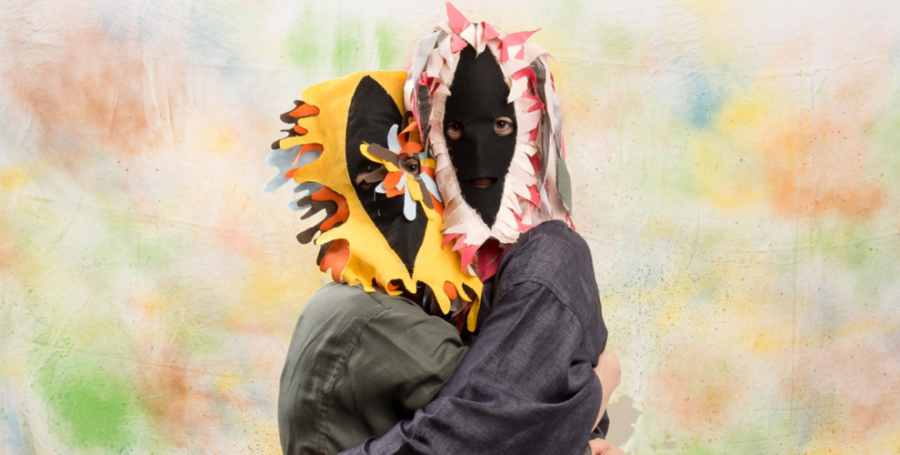 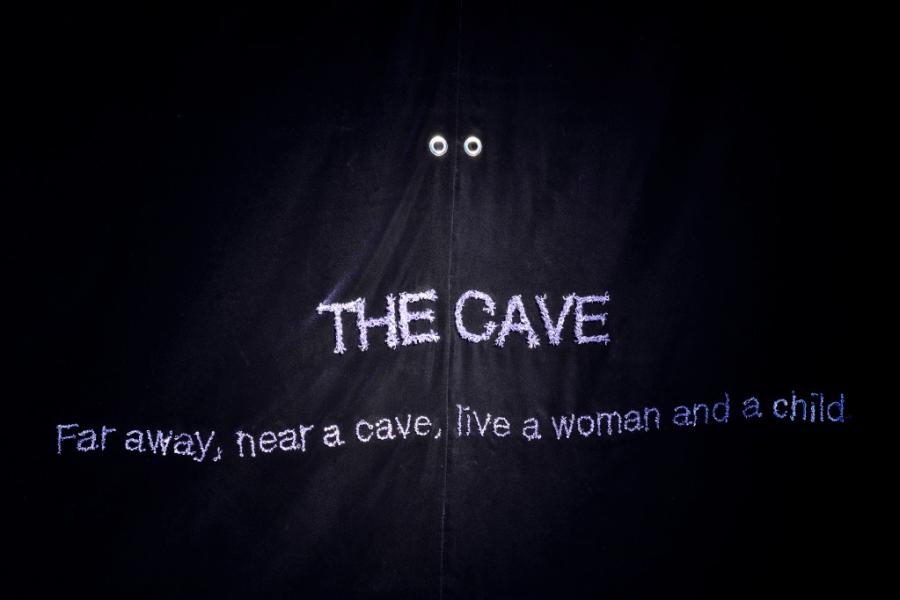 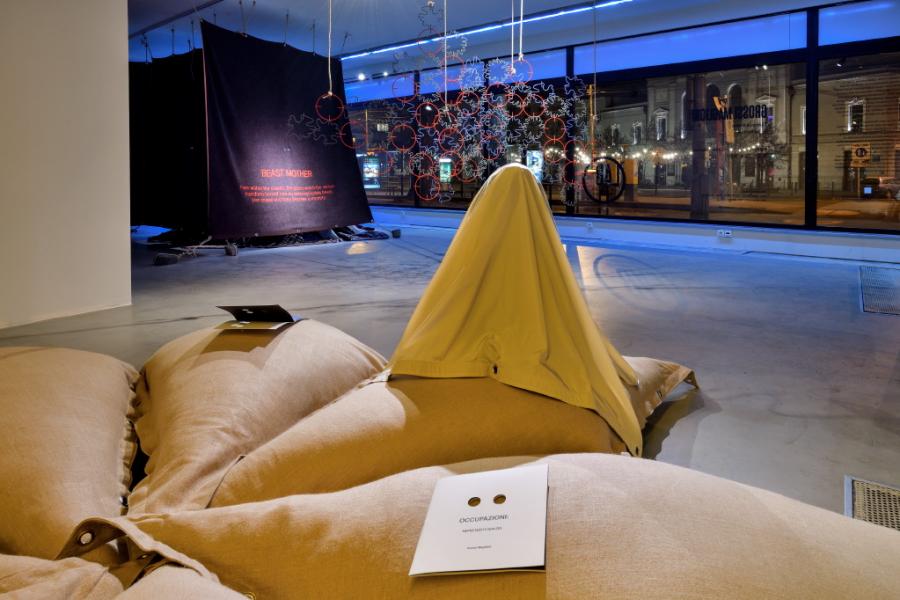 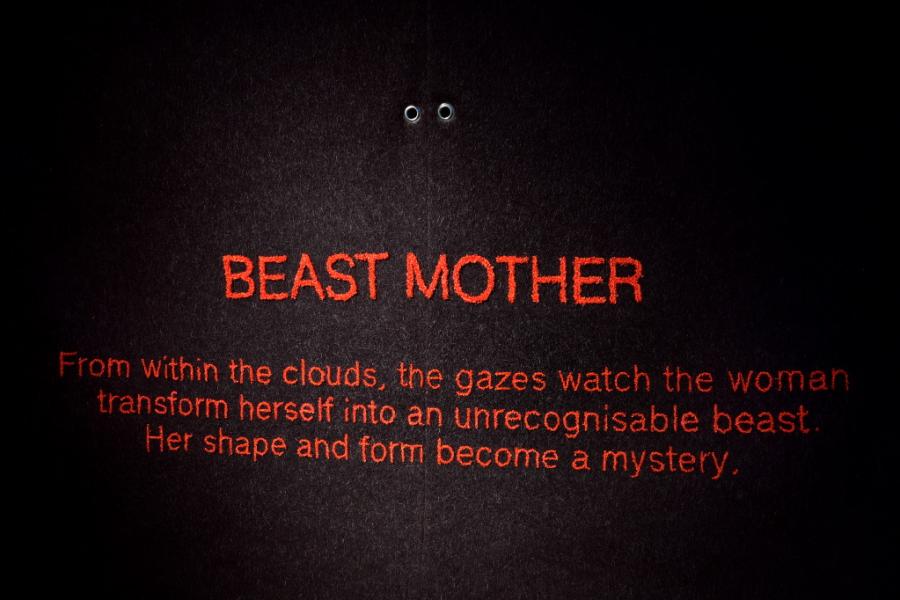 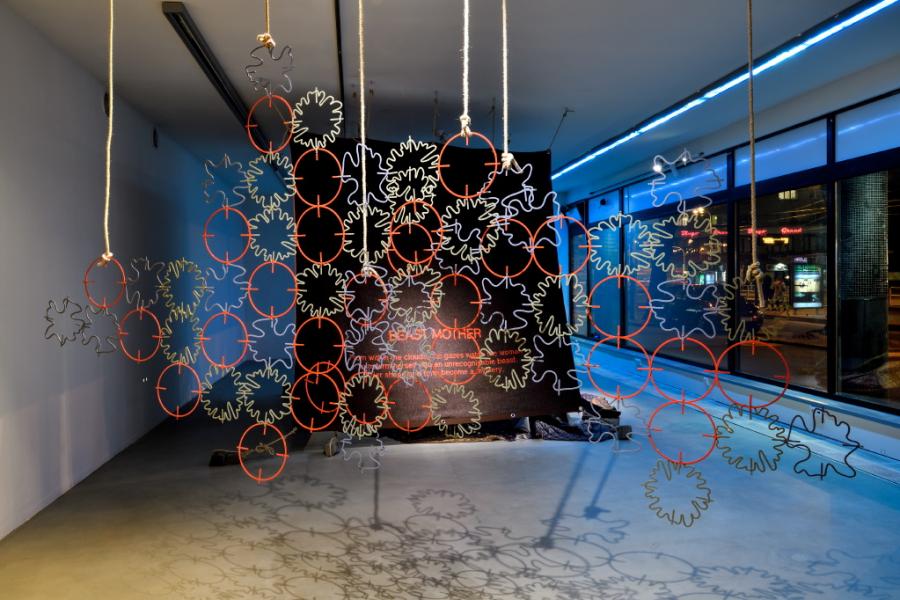 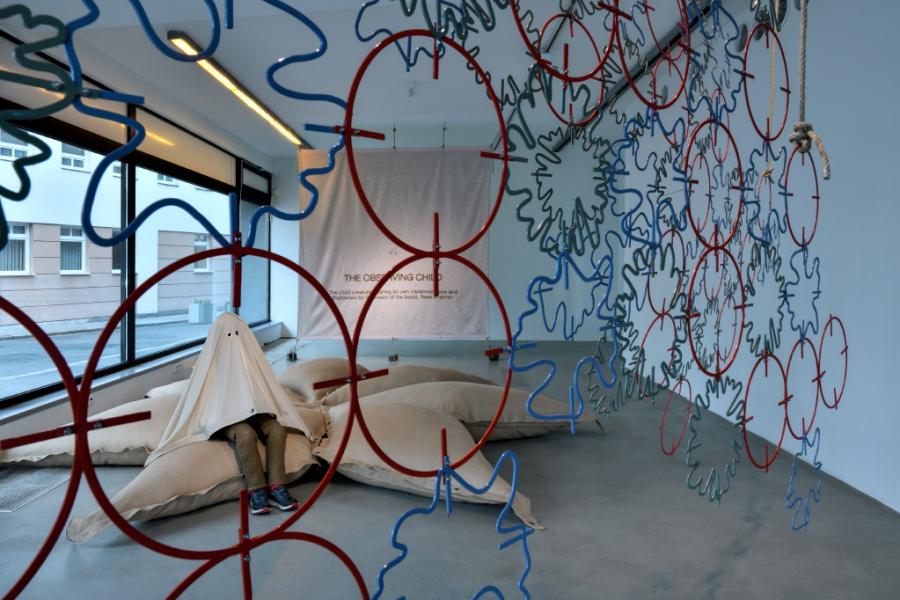 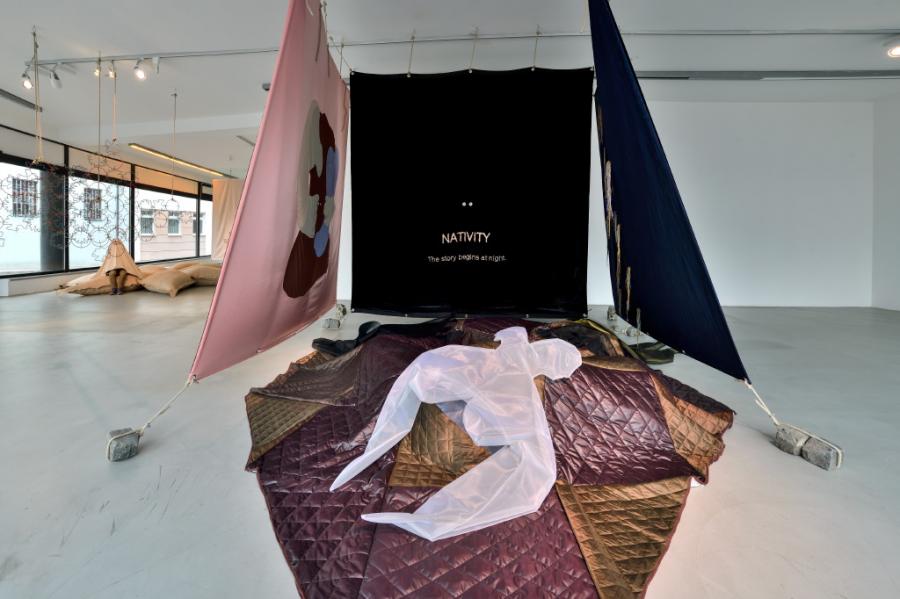 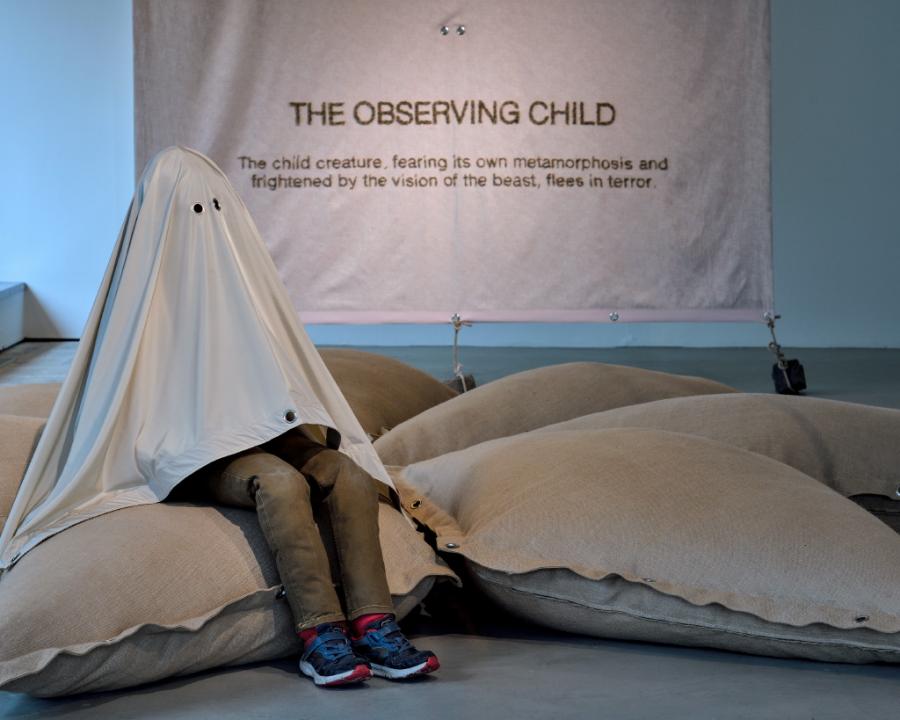 – I’m not a monster. I’m a mother.
– You’re not a monster, I said.
But I was lying. Actually, I wanted to tell you that it’s not such a bad thing to be an ogre.
– Good to know that, darling.
With a stony face I averted my eyes, looking somewhere behind me. Good, indeed. You’re a mother, Mama. And you’re a monster too. But I’m one also, and that’s why I can never get any distance from you.[1]

The Beast Mother project[2] focuses on examining motherhood, care relationship, and its transformative potential. It comes out of several lines of thinking: post-feminist and anthropological discourse, psychoanalytic writing, sci-fi literature and film and their theoretical analysis, and also from the maternal experience of the artists themselves and their interaction in a group of mothers and children. Its central point is the mother and child couple. The child and its maturing, the passage to independence from the mother, leading towards the broader society. Grossi Maglioni explore the iconography linked with motherhood as something frightful, where majesty and menace overlap in the picture of the mother. Their research unfolds from a suggestive imaginary, from prehistoric ideas in which the female body fuses with animal and plant elements[3], through ancient mythology and magic, to the visions of sci-fi. Grossi Maglioni have drawn upon various sources of inspiration: they refer to authors such as Donna Haraway (The Promises of Monsters)[4] and Rosi Braidotti (Mothers, monsters, and machines)[5], as well as Octavia E. Butler’s Xenogenesis series. These authors share the view of motherhood as something monstrous and appalling, while also being something that expresses a potential to overcome the boundaries of species. In sci-fi stories there are numerous examples of the birth of a hybrid/extraterrestrial creature, a monster, from the body of a human woman, and also of the coexistence of two different entities in one body. The original Latin expression monstrum designated a divine portent of catastrophe. Before its adoption in Old French, it had represented an animal of many origins: centaur, gryphon, satyr. To be a monster originally meant to be a hybrid signal, a beacon, simultaneously a refuge and an alarm system.[6]

The core of the exhibition is the story Occupazioni: The Perpetual Dialogue, which the artists have been developing over the longer term in groups of mothers and children, during a series of meetings and workshops in Rome, Novi Sad, and elsewhere. One may listen to it during the exhibition or read it in the exhibited publication. The installation consists of two contrasting settings, the scenes of two chapters in the story. The darker, gloomier of these represents the cave, but it is quarters for caring, a kind of archetype of a dwelling. It defines a constituent need of human society: the need for a home. This is a welcoming refuge, newly defined at the end of the story as a mobile nomadic place shared with a community. Grossi Maglioni have been working with the motif of the mobile dwelling since 2014, when they initiated research regarding the takeover or occupation of private and public spaces. They explored the relationship between mobile architecture and the needs of small communities in the urban and natural settings, and it was in the context of this research that they began to outline the story. The brighter setting represents emptiness, nothingness, the desert in the story, which however, comes to life and flowers after contact with human beings. The cloud of targets refers to the importance of the focused, concentrated gaze, which explores and leads to reflection. From the earliest ages, stories have had a magical healing power. This has to do with the mother and child, who in the context of its development has been transformed, undergoing, so to speak, a ritual process of initiation.

Every protection brings restrictions with it also. The child, on becoming aware of these restrictions, generates a development towards greater independence. After each parting we must newly define our identity. Furthermore, in each human being there is an instinct for evolving, an instinct for independence. The step from symbiosis to individualisation, from experiencing unity with the mother to oneself as a distinct person, involves a severance of the child.[7] This is why, in stories such as Cinderella, The Twelve Months, Vasilisa the Wise, the Goose Girl, and many others, the main character’s own excessively good mother[8] soon dies and her daughter, in the course of maturing to an independent human being, must survive injustices and hardships. The theme of disengaging oneself from parents is thus an issue of separation, after which people leave behind them a variety of life spaces or take them with them further in a changed symbolic form. Disengaging oneself is a strenuous process and the principle of responsibility, which results from it, involves great effort. What we gain, however, is the feeling that we are living our own lives.

In the current situation, when the pandemic obliges children and their parents to sacrifice many of their needs and spend a longer time together than is usual, it is very important to strengthen the capacity to forge strong and supportive bonds and survive the mutual closeness. To create instruments for successfully confronting critical situations. The artists are exploring what it means to be a woman, a mother and an artist in the currently precarised and gender-unequal society. Proceeding from their own experience, during the spring lockdown Grossi Maglioni, together with another artist Sara Basta, published an open letter about the stalemate situation where artist-mothers in Italy found themselves, Siamo noi le vere mostre![9], launching a vigorous and stimulating public discussion. For the artists their work on this document was an important moment in their continuing discussion: their aim is to stimulate thinking and the initiation of positive change, regarding caring and motherhood, in the political and social reality which they are addressing in their research. The transformation of woman to mother, generated by the need for care, leads to the thought that closeness between people and the care relationship leads to a negotiation about identity, and that this negotiation makes it possible to change the perspective whereby one sees the other. Via the figure of the beast mother, the complexity of the body is depicted, and monstrous aspects, which are in contradiction to the prevailing and socially accepted ideas of women and children, are made visible. Diverse taboos and conflicts come to the surface here, but so also do poetic possibilities, offering different perspectives on the tasks of women and society.

GROSSI MAGLIONI (Francesca Grossi and Vera Maglioni, *1982, Rome) began their partnership in 2006. They work with performative, theatrical and participative principles and create site-specific installations and workshops. They take their starting points from findings in anthropology and gender studies, and also from borrowed elements of popular culture such as sci-fi, cabaret, and so on. In recent times, they have focused on educational projects and work with the child viewer and parents. Grossi Maglioni’s work has been exhibited in galleries, museums and academic institutions, including: Accademia di Ungheria, Rome (IT); Novo Kulturno Naselje, Novi Sad (RS); Istituto Svizzero, Rome (IT); AlbumArte, Rome (IT); American Academy, Rome (IT); Viafarini, Milan (IT); MACRO Museum, Rome (IT); Verkstad för konst, Norrköping (SW); ERBA Ecole Régionale des Beaux Arts de Besançon (FR); Konstall Museum, Vasa (FI). They have participated in a number of residencies, among which: Magic Carpets Residency, Novi Sad (RS); Rupextre, residency for artists and anthropologists, Matera (IT); Svenska konstskolan, Nykarleby (FI). From 2008 to 2014, the duo has been part of the international research platform for performance arts, science and technologies Vision Forum, based in Sweden.

LÝDIA PRIBIŠOVÁ (*1980, Bratislava, Slovakia) is a curator and art historian based in Bratislava. Since 2006, she is Slovak editor of Flash Art Czech & Slovak Edition, since 2015 managing editor. 2013 – 2015 she used to work as project coordinator in tranzit.sk. In 2012 she founded nonprofit initiative PILOT. In 2007 and 2011 she co-curated Slovak section of Prague Biennale, in 2019 she co-curated Kaunas Biennial in Lithuania. In 2019 she is guest curator of Hit Gallery, preparing the whole year program. In 2013 she obtained PhD degree at the University La Sapienza in Rome, in 2016 she published the book La Quadriennale di Roma. Da ente autonomo a fondazione (Quadriennale of Rome. From Public Body to Foundation) based on this research. Lýdia is the President of the Slovak section of the International Association of Art Critics AICA. She collaborated with many institutions and galleries in various countries (short selection): Museum MAXXI and AlbumArte, Accademia di Belle Arti di Roma in Italy; Kunsthalle Athena in Greece; Museum of Art in Cluj-Napoca, National Gallery in Tirana, OI Futuro in Rio De Janeiro; Zentrum fűr Kunst und Urbanistik in Berlin, Museum of Contemporary Art in Novi Sad, Museum of Modern and Contemporary Art in Rijeka, ISCP in New York, and tranzit.org, Kunsthalle Bratislava, Hit Gallery, Medium Gallery and SPACE in Bratislava.

[2] We gave consideration also to such titles as Mother – Monster, Mother – Beast. In their Slovak versions, however, by contrast with Italian, these sound excessively negative and inappropriate.

[3] Grossi Maglioni are inspired by the research of the Lithuanian archaeologist Marija Gimbutasová, who has devoted particular attention to prehistoric depictions of female creativity and fertility and the Great Goddess cult.