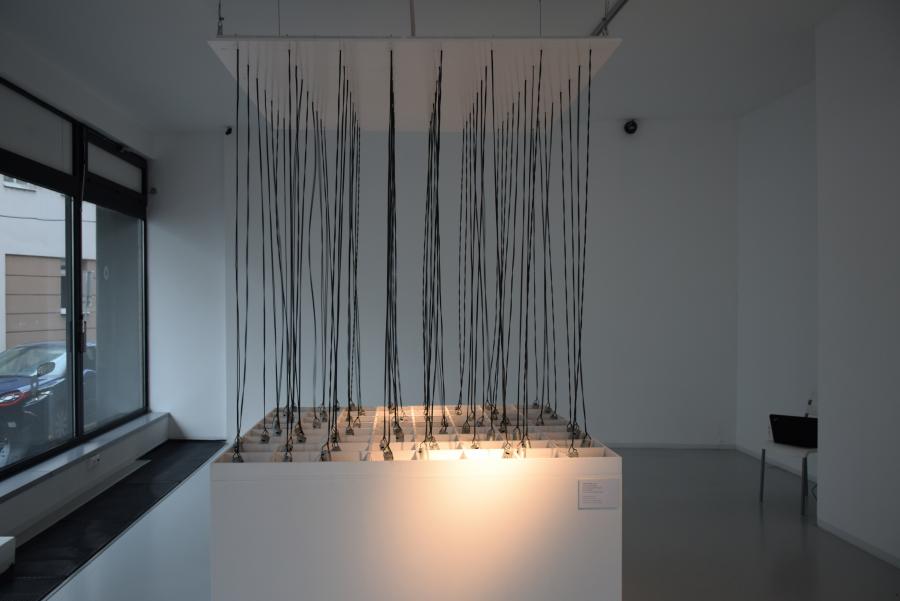 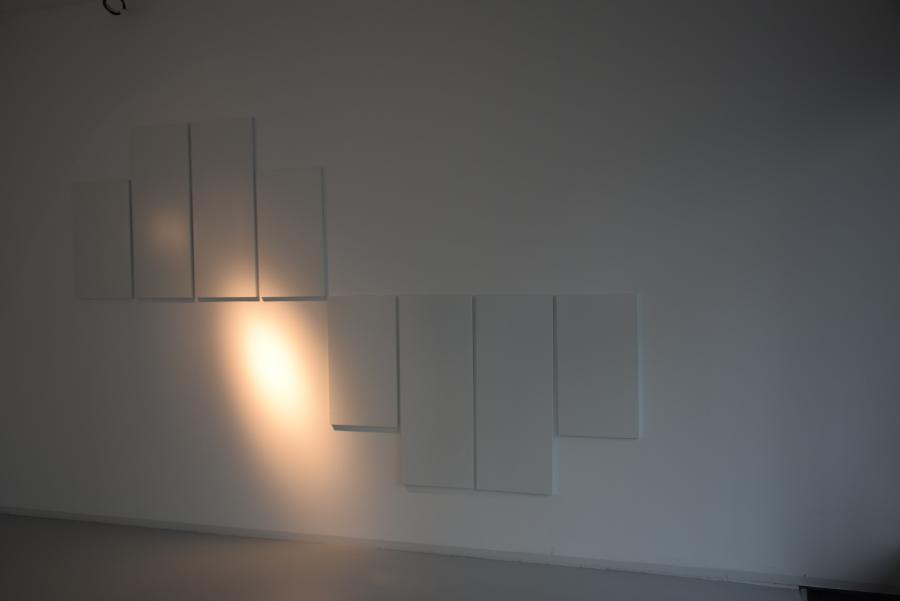 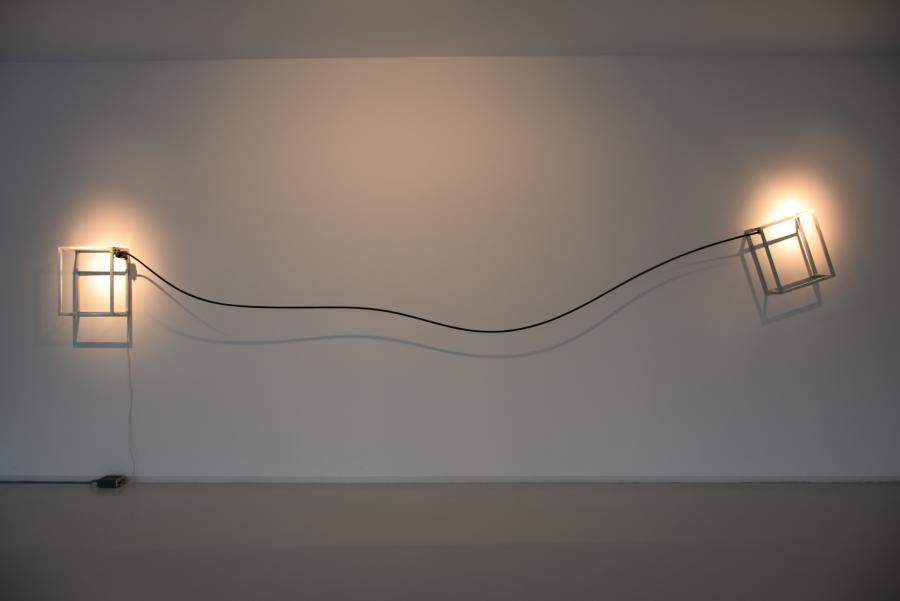 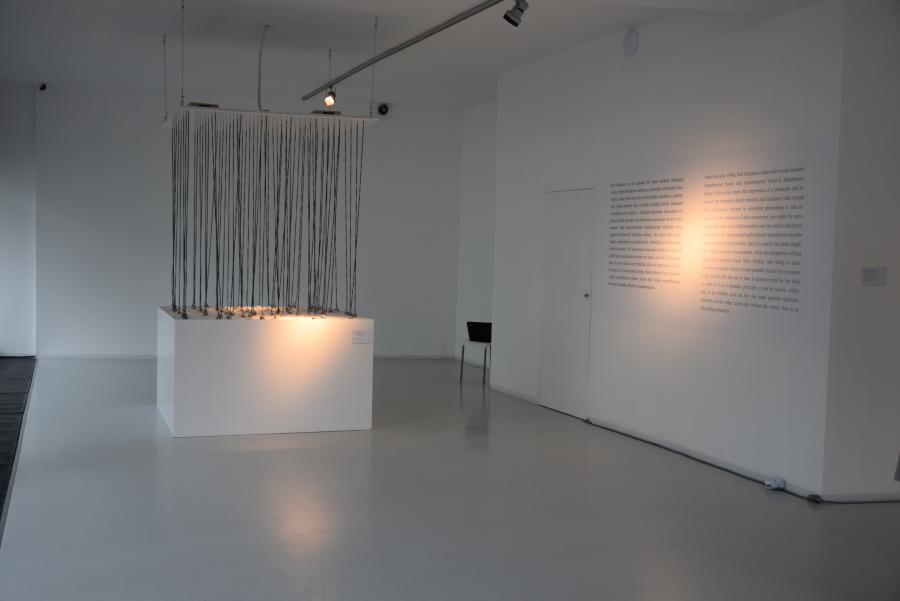 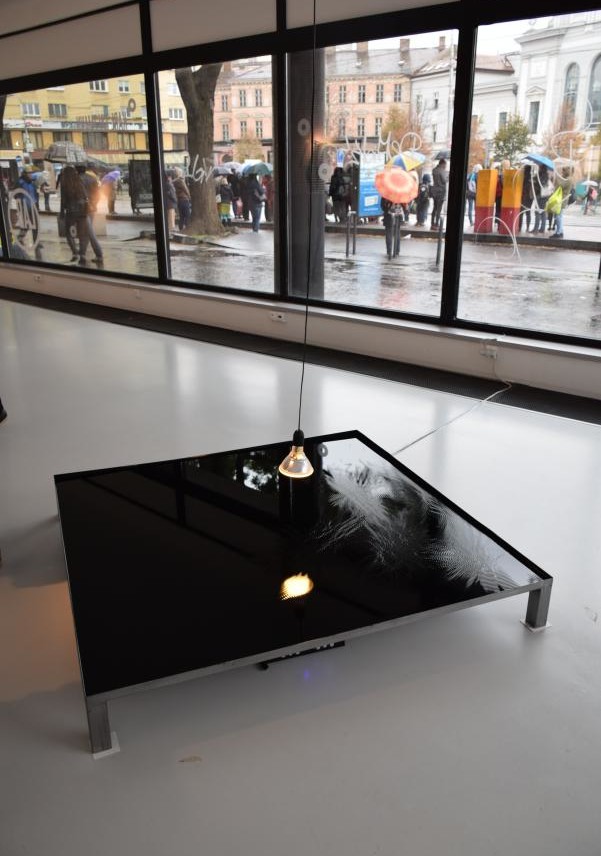 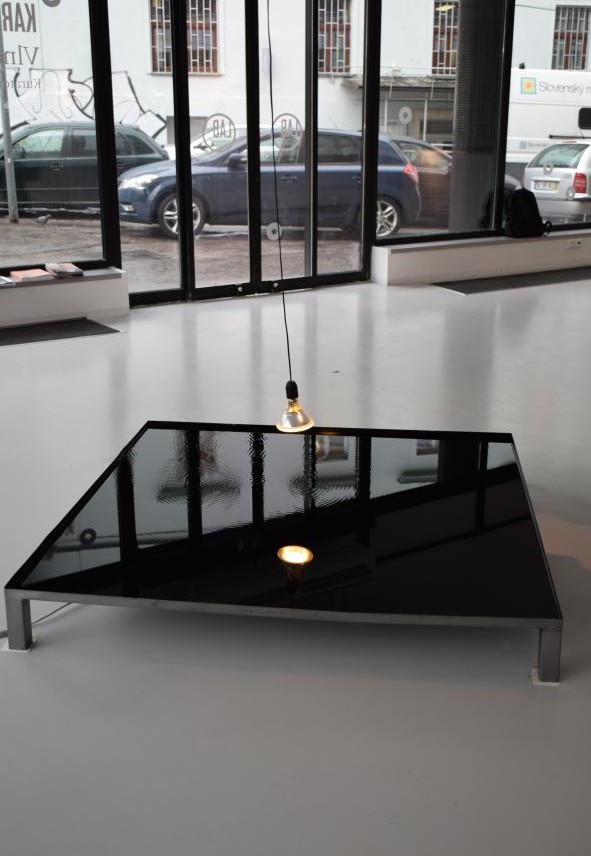 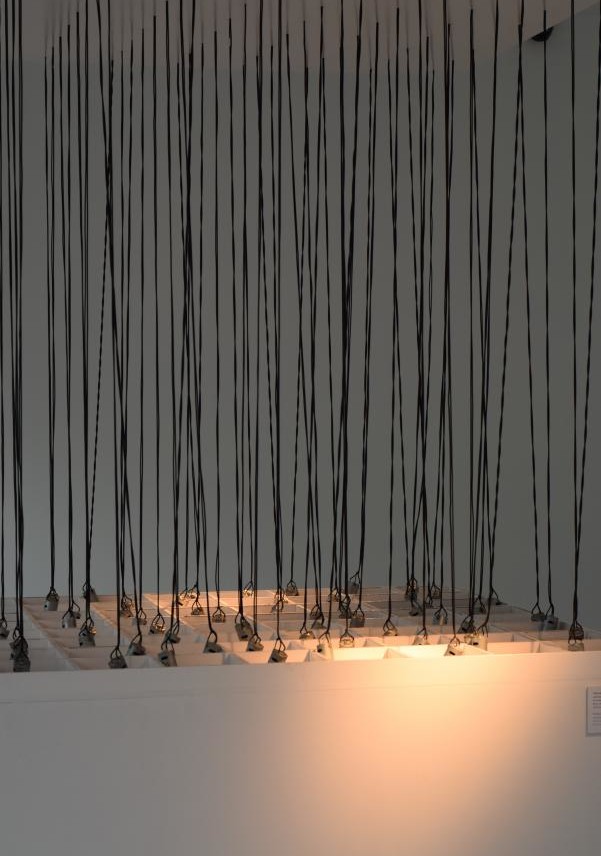 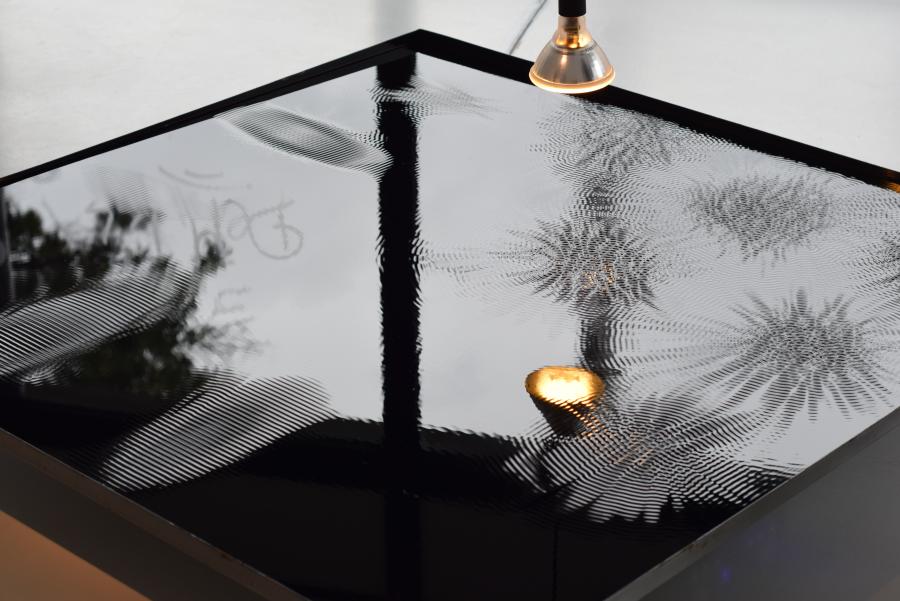 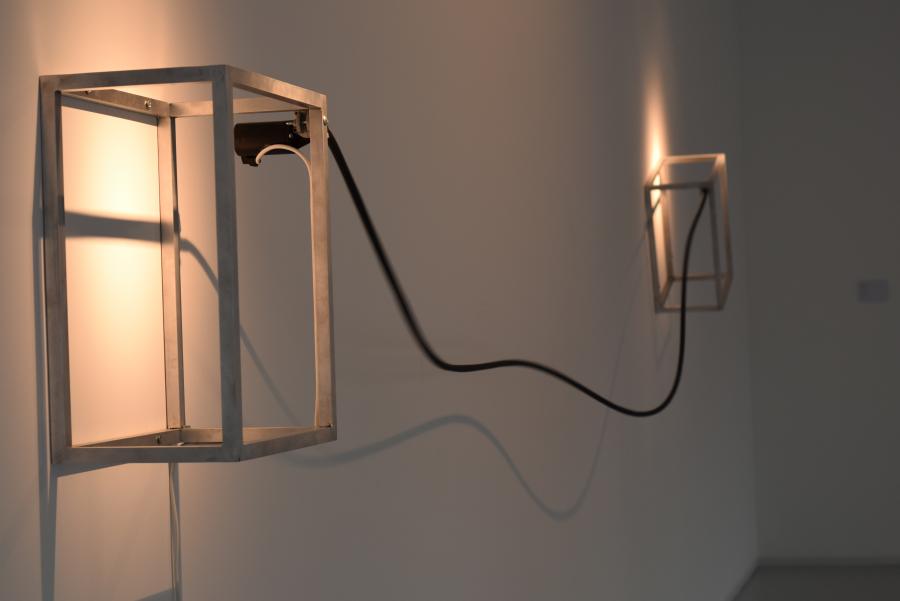 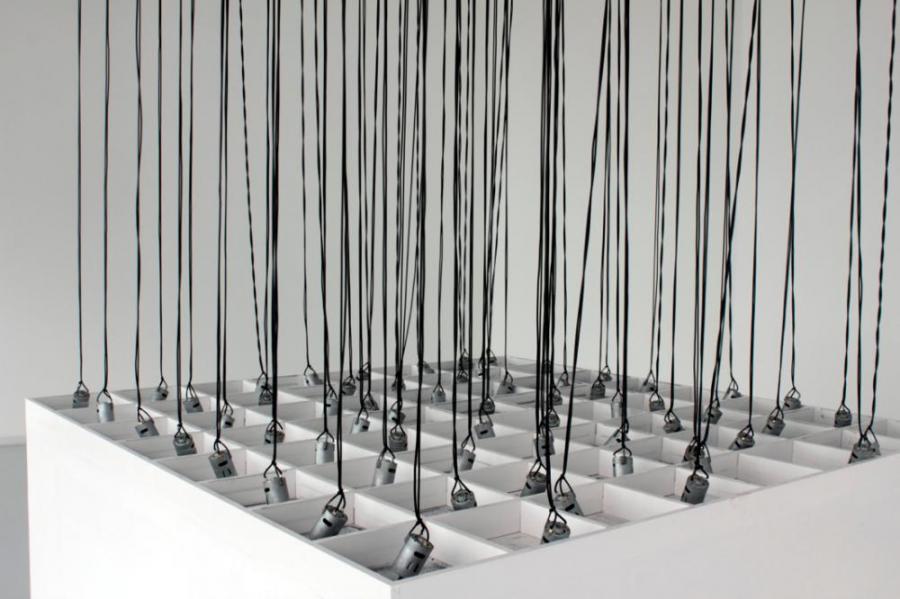 Since the early 1990´s, Salzmann deals with sound research, experimental music and contemporary musical phenomena. During his intensive work with sounds, rhythm and their various audio-visual forms, he found his way to a form language, which is characterized by its simplicity as well as restraint of movement and sound. To illustrate both these building blocks of his works and to move them to the center of attention, the artist abstained from the use of unnecessary material. The sequences of the works are likewise simple and straightforward, with their repetitions being completely automated. Nonetheless, Salzmann’s works feature a wide range of acoustic and formal aspects. With a congruent constructivist approach seemingly resulting in a sculptural process through the utilization of the sound coupled with the movement (and vice versa), the process does not necessarily result in a sculpture. Many of the works create the impression of a prototype and represent the attempt to depict sound in and combined with a visual form.

Wave Studies are Salzmann’s way of artistically and scientifically presenting interpretations of his research of natural acoustical phenomena. As early as in the time of the renaissance, art and science (and thus art and technology) were very closely related to each other. Nature and science are not to be considered opposites, we only need to find common means of expression for them. Salzmann’s interest in acoustical phenomena is not expressed by the imitation of their occurrence, but rather by uncovering their most basic characteristics and the artistic interpretation thereof. His experimental audio-kinetic installations describe relatively simple physical facts. And it is exactly this plain simplicity, which captivates the audience.

Naum Gabo’s Kinetic Contruction from 1919/20, the work which gave rise to Kinetics, is, in terms of the visible elements of this work of art, an extreme example of the reduction of material. It is comprised of a metal bar vertically inserted into a socket, which is being oscillated by a motor, resulting in an elliptic movement of the bar. From a metaphorical point of view, this symbolizes how the linear model of a continual movement takes a back seat to a steady up and down movement typical for life.

Salzmann’s waves are moving in flowing forms, in a pulsating choreography of endless up down movements or restless trembling. The support material used for visualizing the physical patterns, ranges from simple cables (Wave Cube), a rubber hose (Wave Study 2) and water (Light/Water/Sound/Pattern) or to – in the case of the only static work displayed here – white-painted wood, within which a digitalized sinus wave seems to be frozen in its actual dimension. The same wide spectrum can be observed in the case of the repetitive sounds, which go hand in hand with the movements (or is it the other way round?), which range from nervous clattering to rhytmically sonorous buzzing.

From the perspective of Karl Salzmann’s acoustic-visual wave studies, one thing is clear: the wave continues where it is not possible for the eye to pursue it any further, for the ear to hear it anymore and for the body to sense it. It is a dynamic principle, a law of nature, which, due to its reliable cycle on the one hand projects calmness, however, on the other hand may irritate the viewer due to its unyielding dynamics.