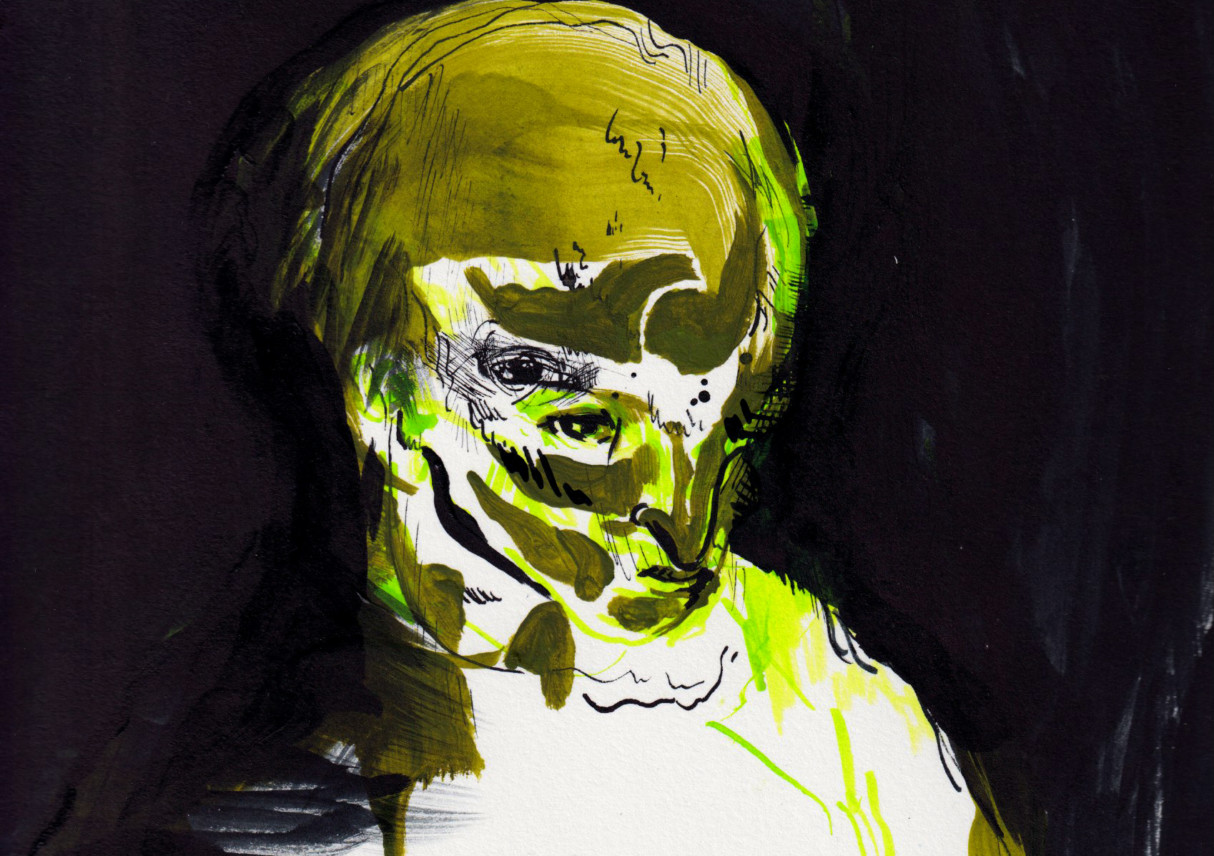 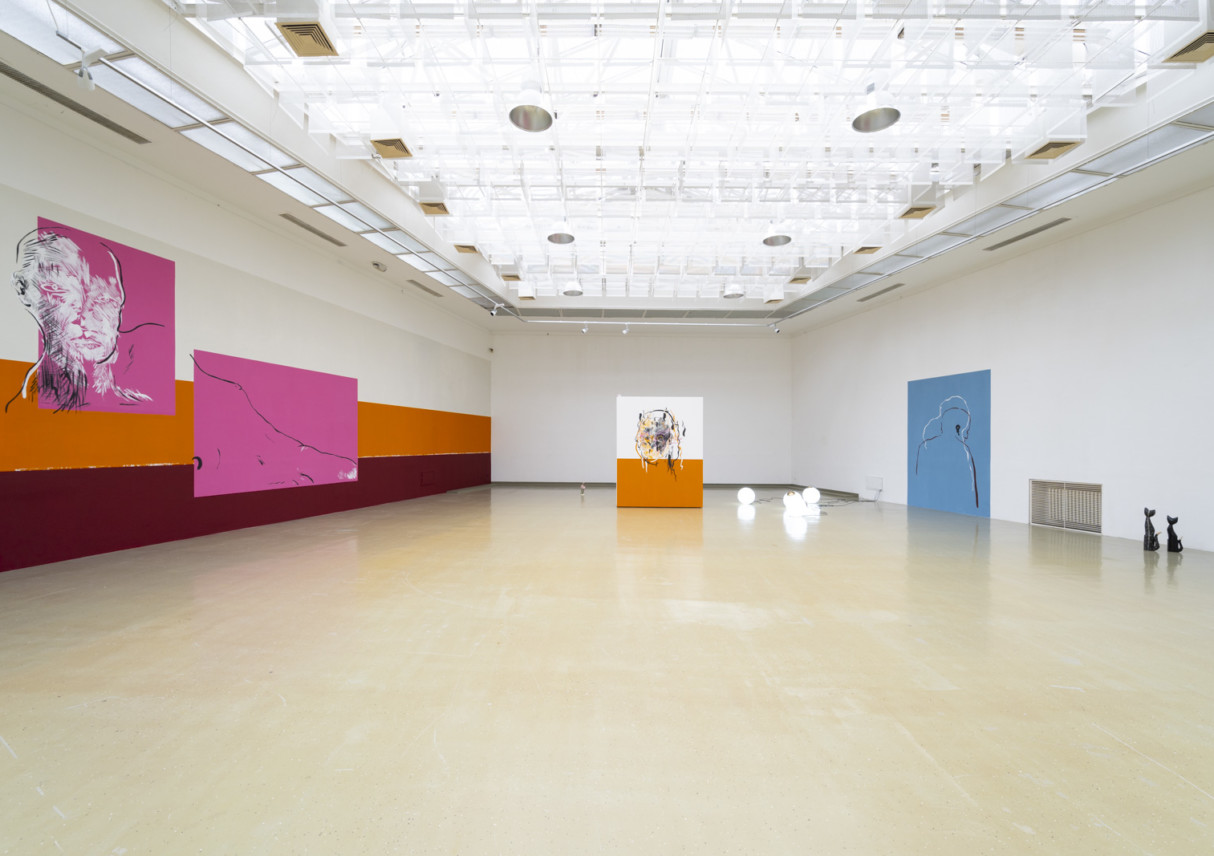 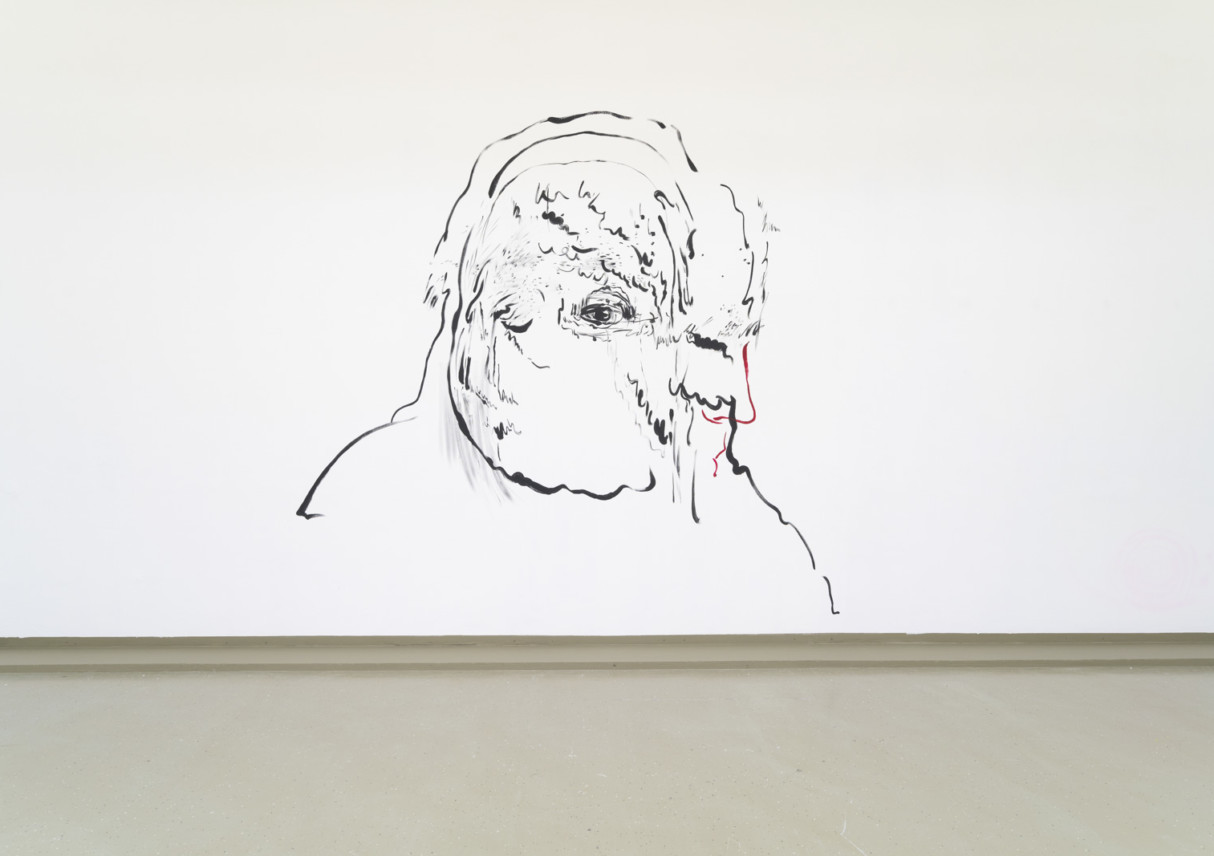 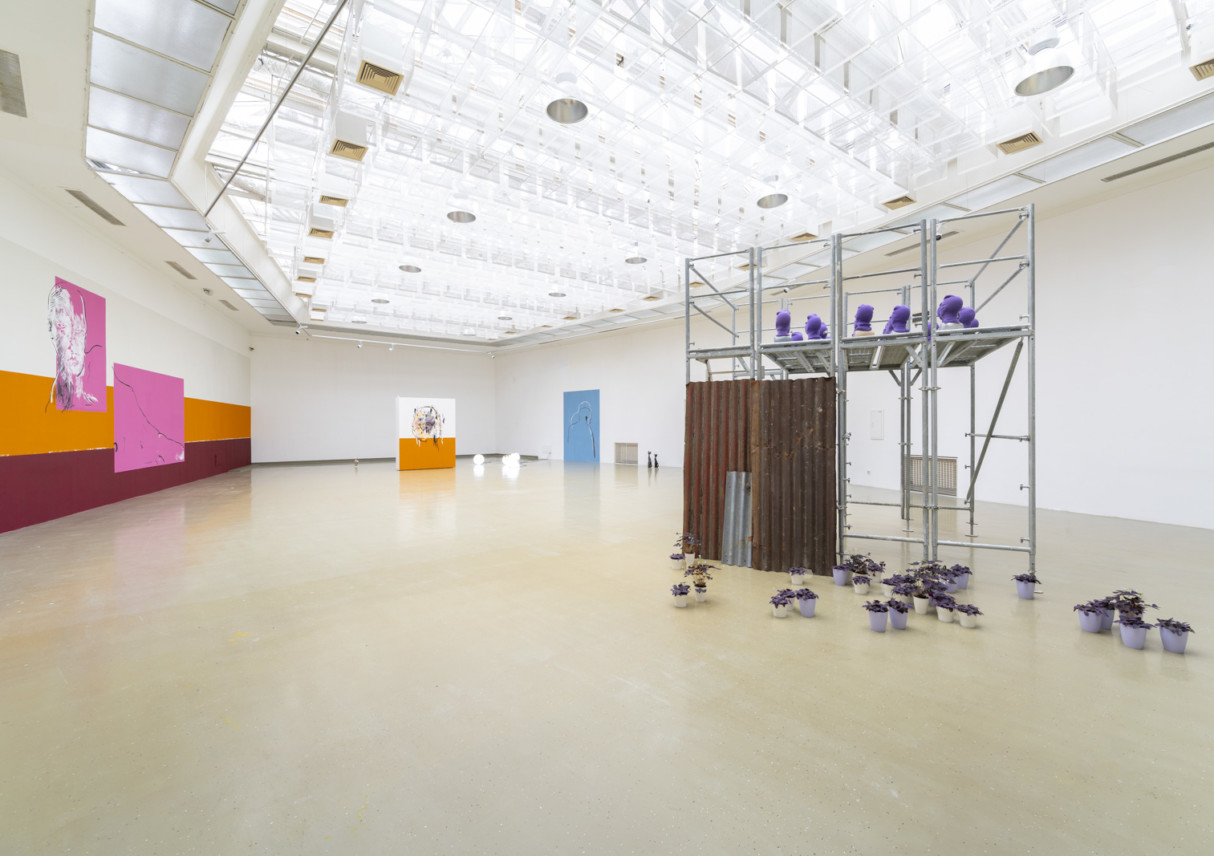 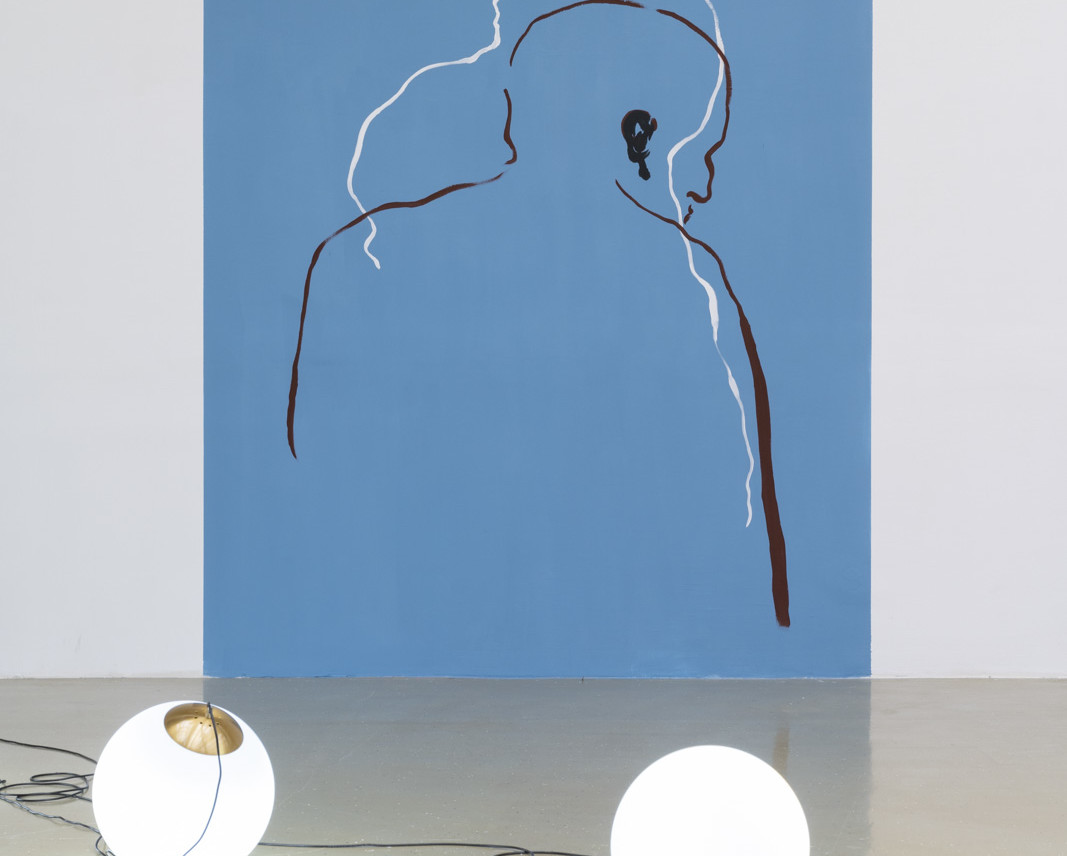 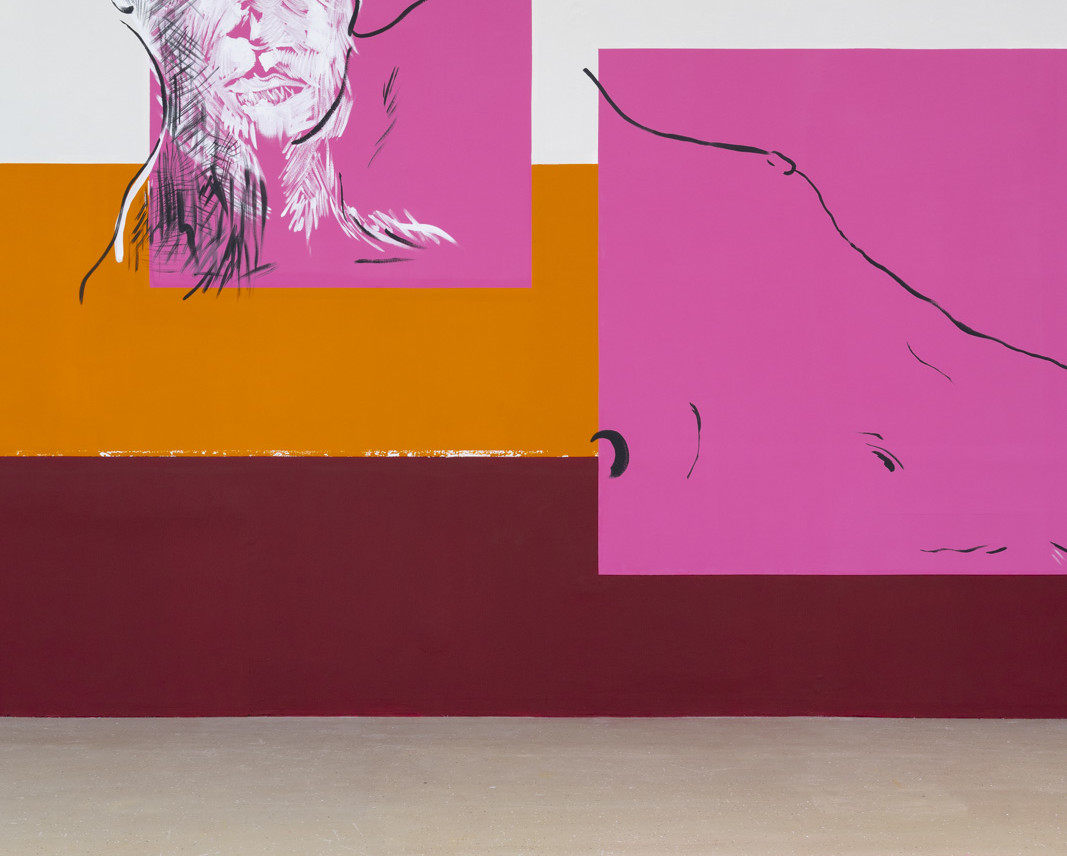 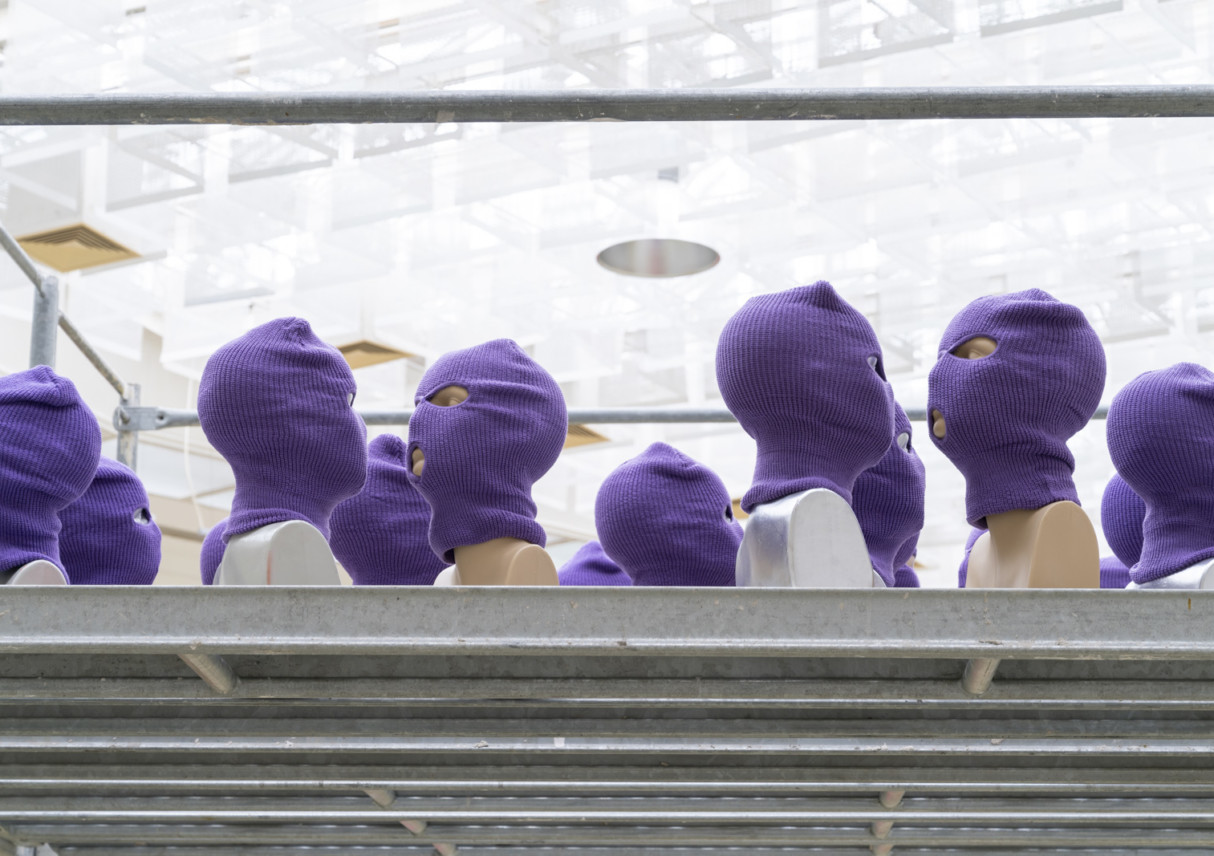 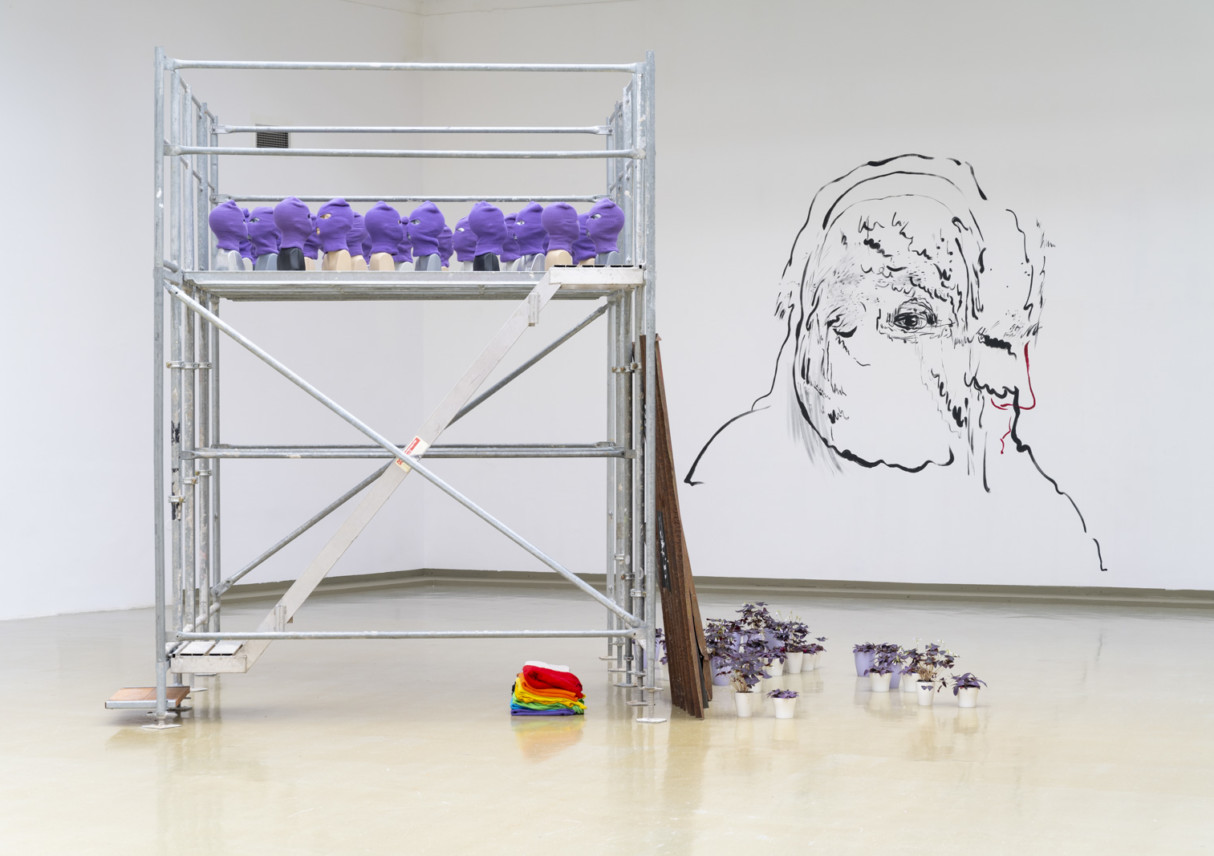 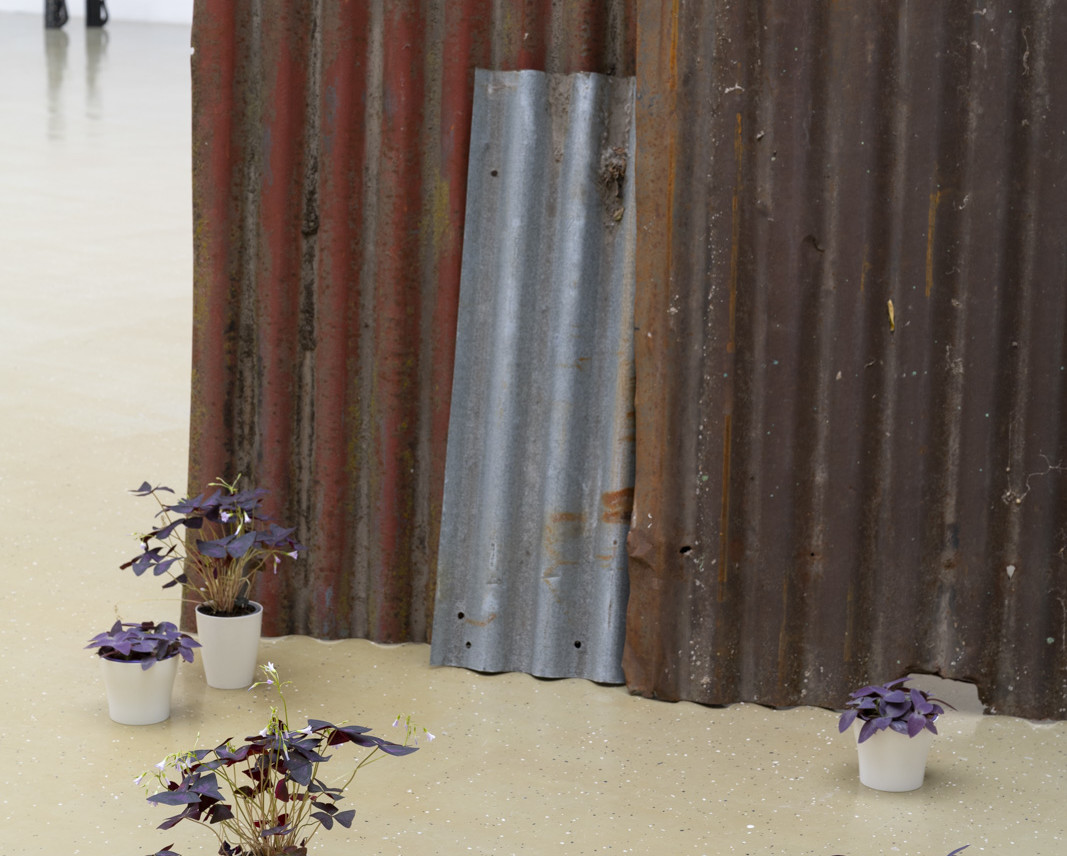 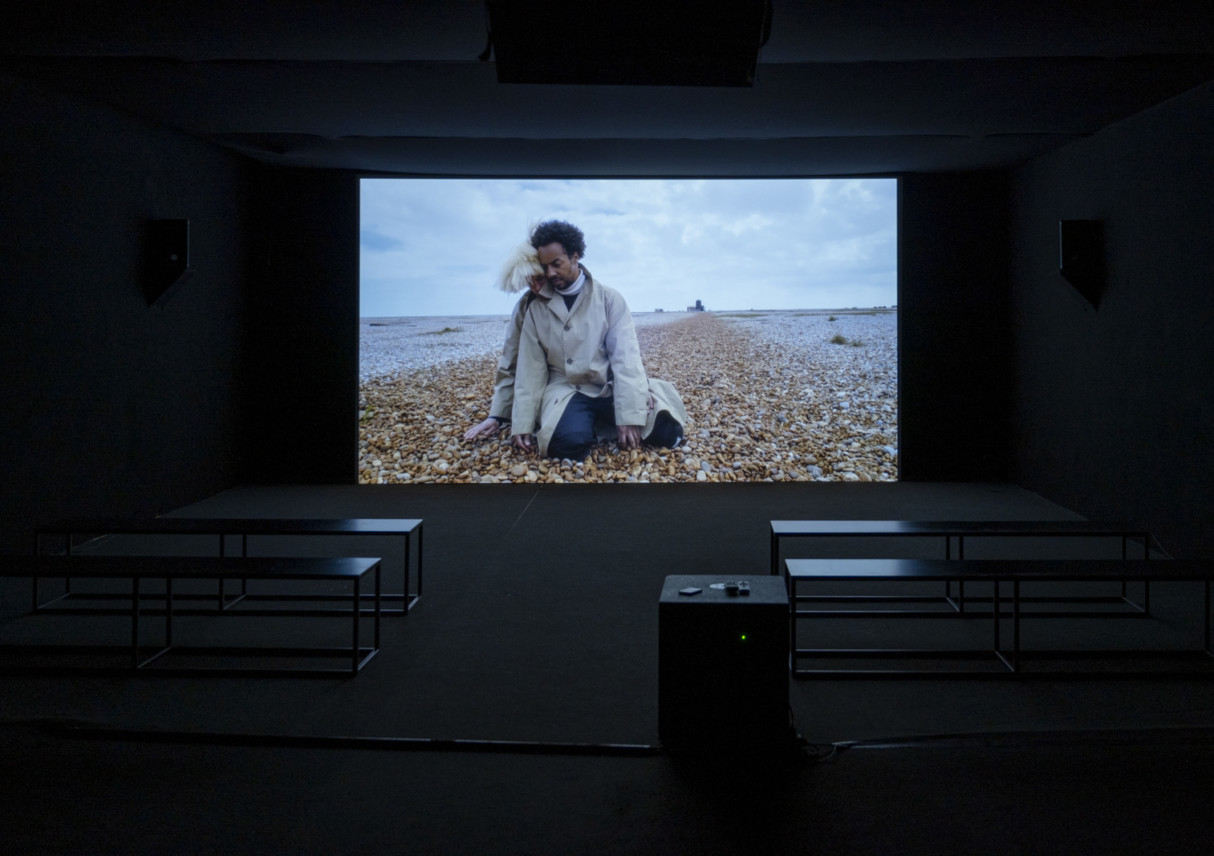 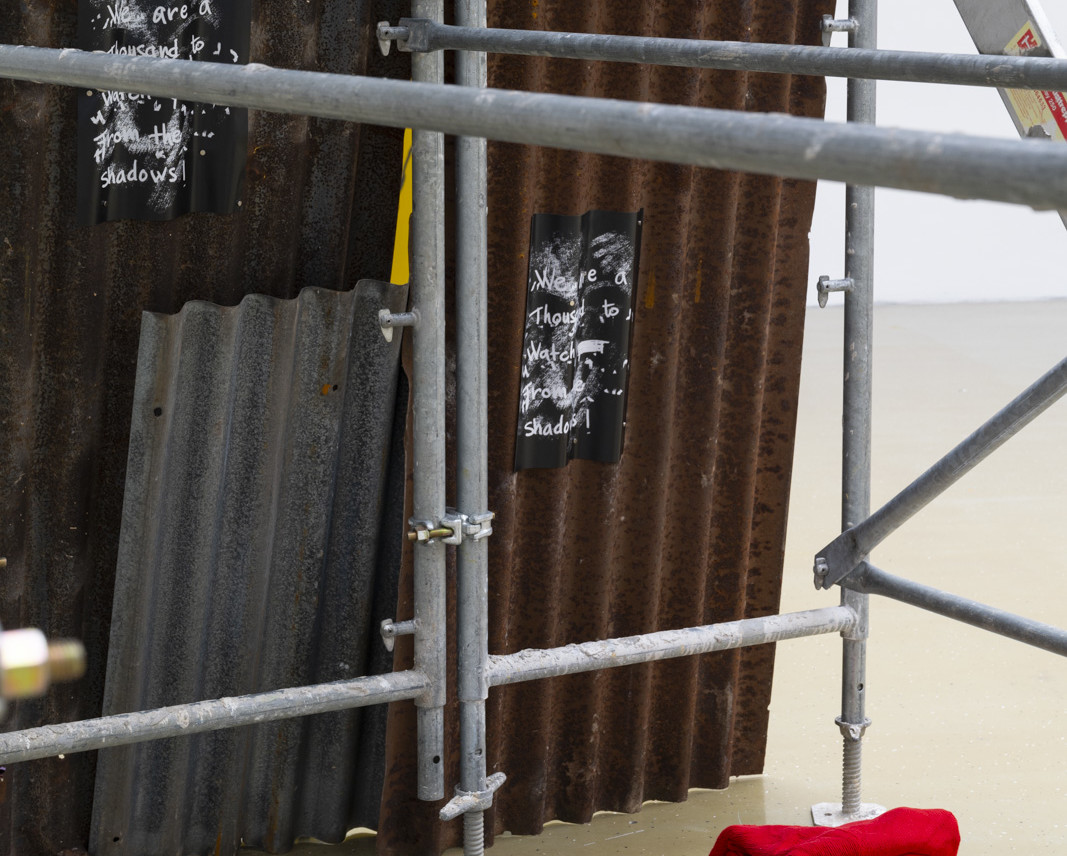 Two figures are moving through a landscape. Only that it might not be a landscape. Their bodies are touching. How many of them are there, though?
It’s hard to say what constitutes a body. They are Mauve, Jim and John. They are conversing and wind floats between their branches and ruffles their hair.
Where do we draw the line between human and non-human? Or even something other? Something which is not other whatsoever, because it is on its own, without perceiving the notion of otherness at all?

Paul Maheke’s first exhibition in Slovakia gravitates around topics of interdependency. Maheke stages circumstances formulated by the physical presence of objects, shapes, lines, forms, sounds, images and imaginations, or silly little animal figures. All of them build a resonating tension, interacting with each other, shifting attention from one to the other; drawing you in and out. Offering solace while immediately cutting your hopes short. There is a complex network of relationships in this exhibition and none of them are simply this or that, none of them exist within normalized binaries. They are all queer, which could mean anything, and that is just beautiful.

The exhibition “You and I”, presents Maheke’s film Mauve, Jim and John (2021), a tale about the various interactions between three entities. A tale based on modern myths, old fears and an escape from timeless oppressions. Although presented in A Black Box with its own separate entrance from the rest of the exhibition – Mauve, Jim and John, offers the viewer an interpretative lens through which they might perceive the remaining body of work present.

A Hall, functioning as a central stage, both literally and figuratively, becomes a place of change and transformation, processes both visible and invisible. A series of plants growing according to their own pace under that highly decorated skylight. Faces are obscured, a staircase is set, lights are spreading – replicated, and walls temporarily take on new identities. And there is clothing for everyone, don’t you even worry.

This might be yet another queer show. Testing the limits of conventional perception, deconstructing binaries, encouraging us to unlearn what has been encoded in our brains for so painfully long. This might be yet another stage to mediate encounters between living bodies, entities, their thoughts and feelings. This might be an exercise in accessing and navigating visibility. A visibility of a minority that very often ends up as a trap. As a place of danger where mimicry needs to kick in to stay protected.

Especially in a place like this. Especially in a country like this. In Slovakia, a place with a strong history of connection between the Church and fascism. Slovakia as a conservative, misogynistic, homophobic place where rights to one’s own body are not given, but taken, restricted and dictated by those in power. Slovakia as a place where high-ranking politicians either use violence against minorities as a stop on their election campaign or take up space that doesn’t belong to them to spread more hate speech and passive-aggressive, seemingly good-hearted claims about protecting the so-called “traditional values” of heteronormativity. Slovakia, a place where political parties take words like “family” into their official names and slogans, i.e., oppressive non-feminist structures of patriarchal domination, spiced with religious fervour.

Online publication accompanying the exhibition Paul Mahehe, You and I..

Paul Maheke (b. 1985, Brive-la-Gaillarde, France) lives and works in Montpellier, FR. He completed an MA Art Practice from École nationale supérieure d’arts de Cergy (2011) and was an Associate of Open School East’s Programme of study, London/ Margate, UK (2015). With a focus on dance and through a varied and often collaborative body of work comprising performance, installation, sound and video, Maheke considers the potential of the body as an archive in order to examine how memory and identity are formed and constituted. Maheke’s works and performances have been shown at High Line, New York, Tate Modern, London, the Venice Biennale, Centre Pompidou, Palais de Tokyo and Lafayette Anticipations in Paris, Baltic Triennial 13, Manifesta 12, Cabaret Voltaire, Zurich and Chisenhale Gallery, London, amongst others. In 2021, he was shortlisted for the Future Generation Art Prize and he will be resident at Villa Albertine in 2023.