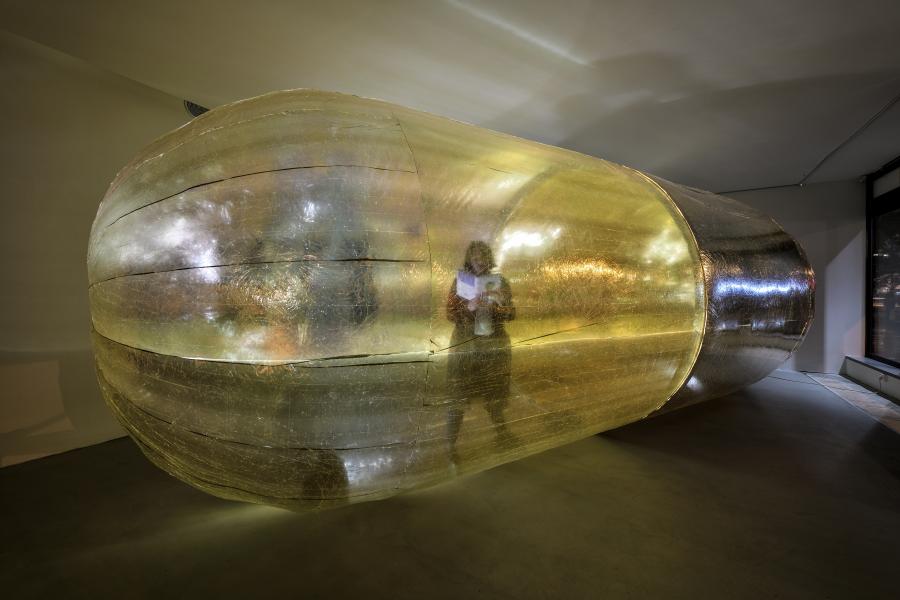 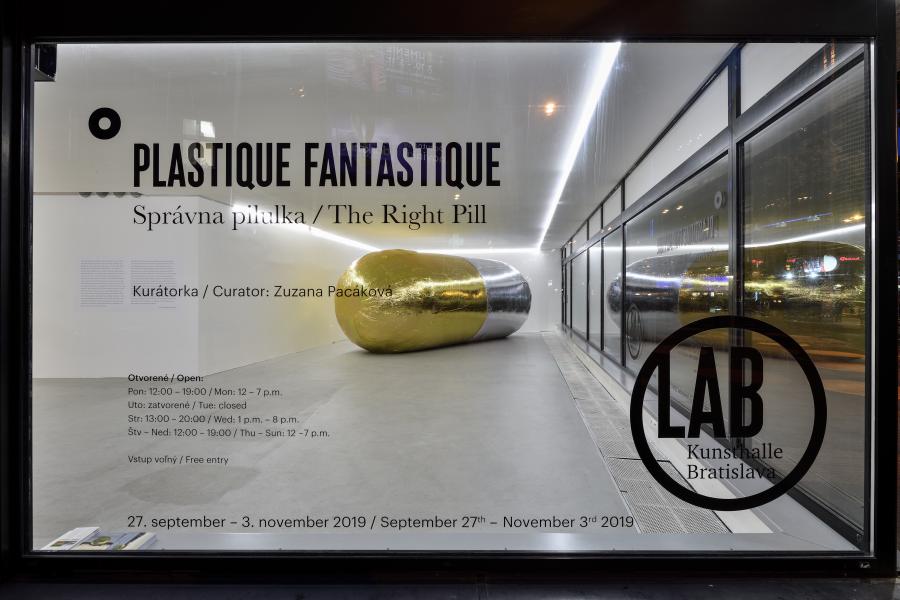 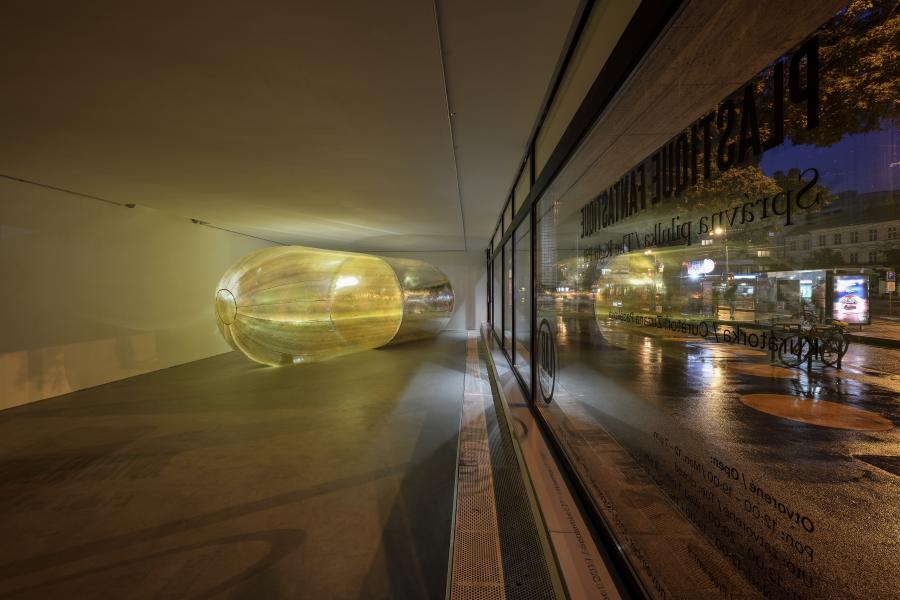 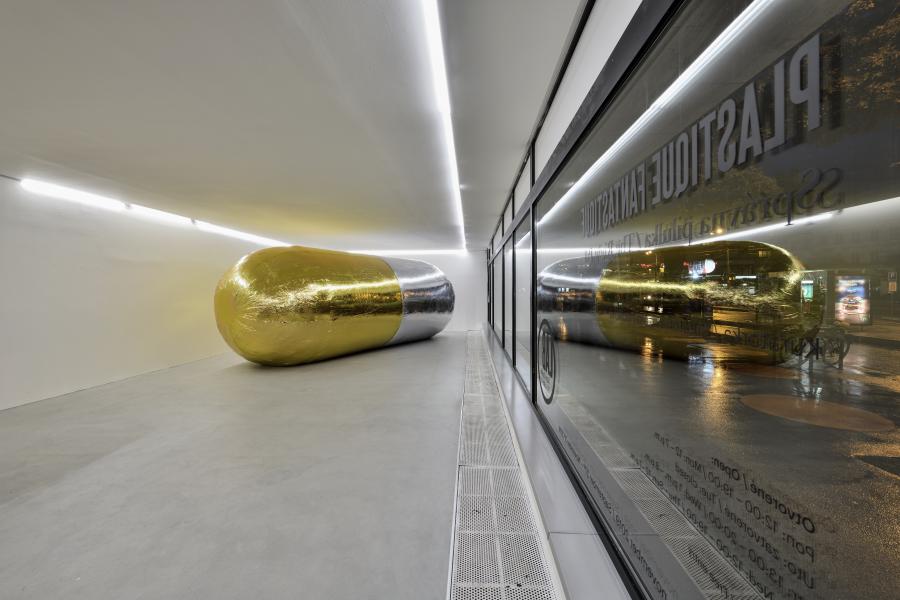 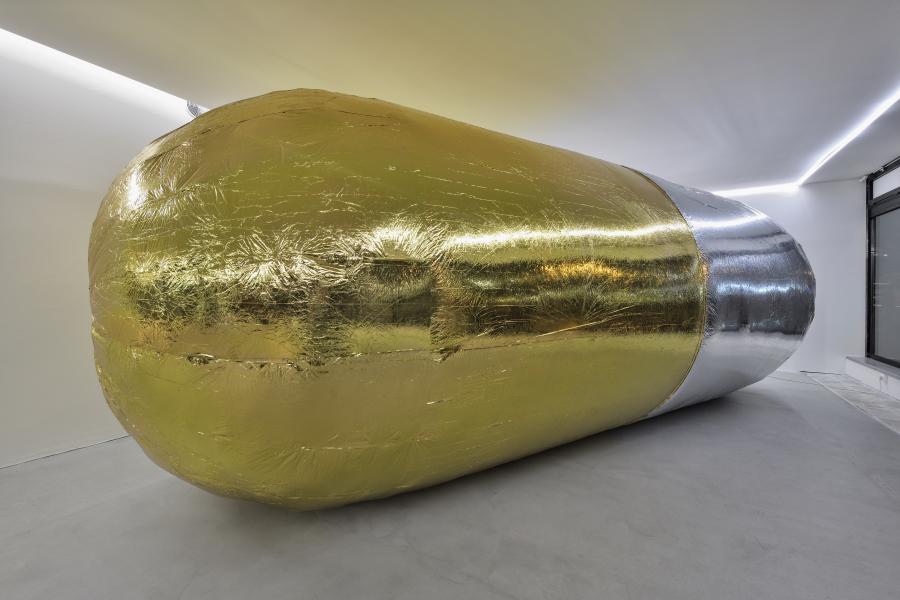 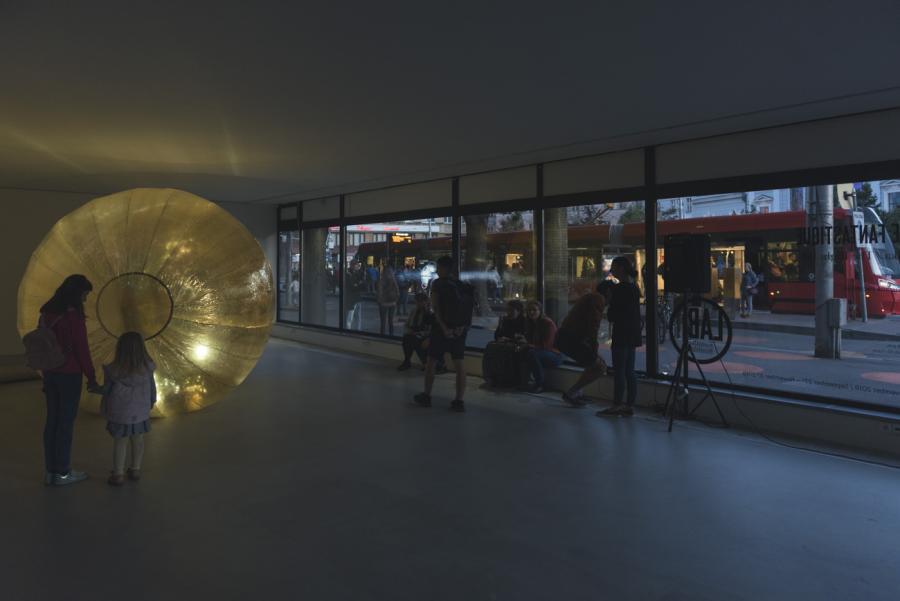 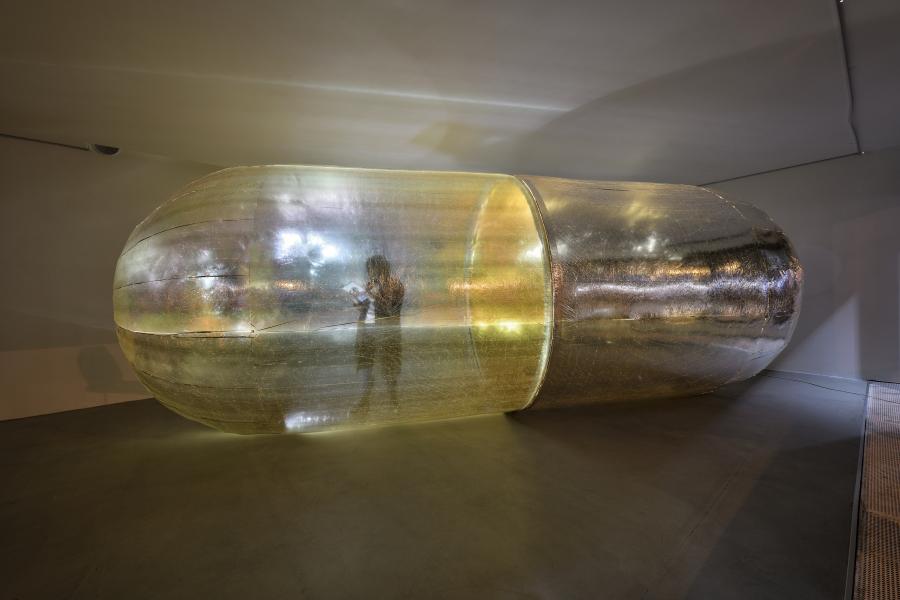 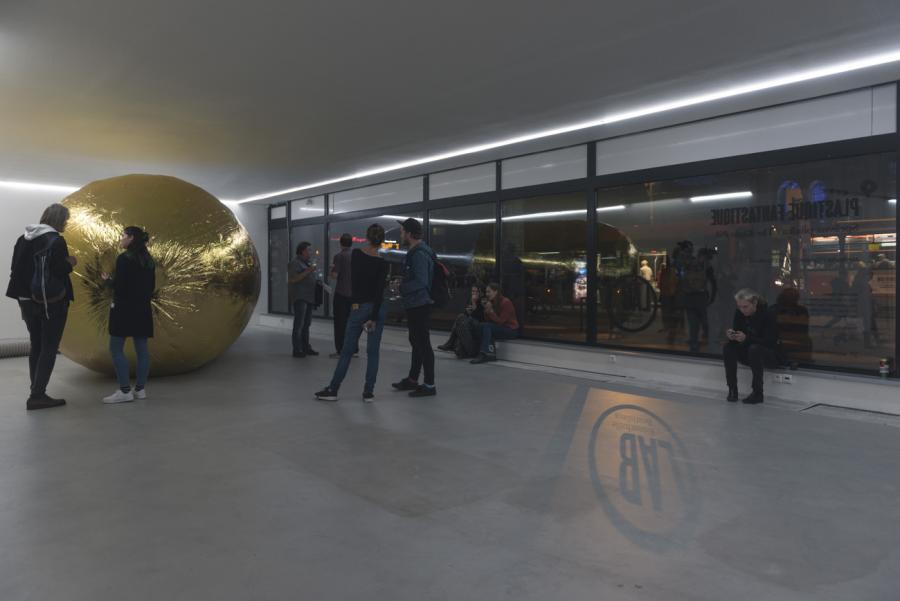 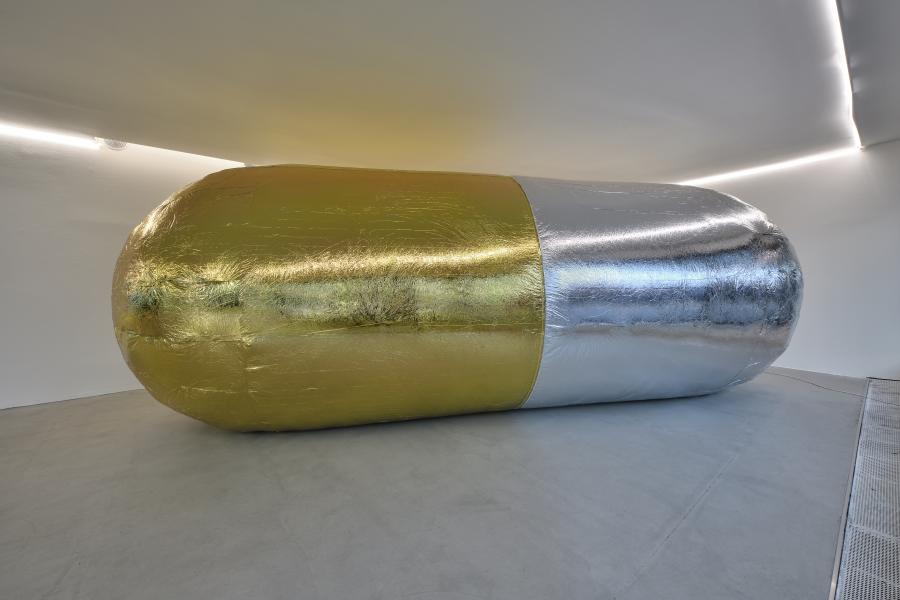 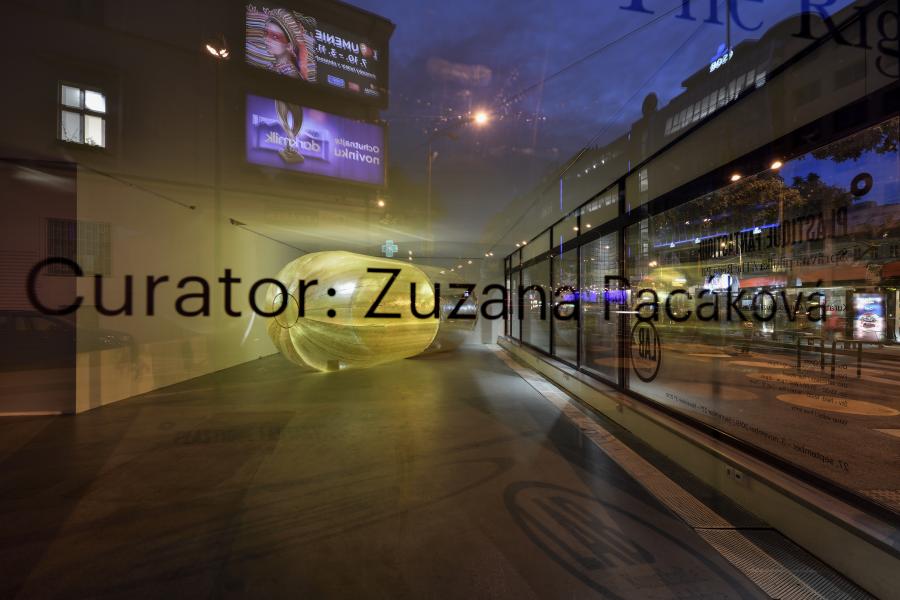 Zuzana Pacáková (ZP): Established in 1999, this year marks the 20th anniversary of your creative endeavors as Plastique Fantastique. How would you define the main common links in your works throughout all those years?

Marco Canevacci (MC): Our works relate to the activation of public space and are filled with a good sense of humour. Most of those installations are quite playful, a world away from the outside. They create a communicative environment where people, who don’t know each other start to interact, communicate and exchange the experience of being in an extraordinary spatial context. We still like to work in this direction because it o ers endless possibilities.

ZP: Your inflatable structures usually become a visually strong and noticeable part of public spaces (however temporarily). Is the link with the public and public spaces important for you? In what sense?

MC: We mostly work in public space and use bubbles to mark and define a specific area. This “extra space” is made of a “skin” of approximately 0,2 mm. In doing so, our creations test the permeable barrier between public and private space. We question public-private borders by constructing hybrid spaces, spaces in-between. By generating different borders between those two entities, blurred or transparent, we stimulate people to respond to new spatial configurations.

ZP: The Right Pill is not a piece of art that would detach itself from “the world people”, to the contrary – it openly reflects on societal and political issues. Do you consider Plastique Fantastique to be politically-engaged artists? Do you think contemporary art needs to be so

MC: I think that everything we do has a political impact. Even the ones that pretend not to be interested or informed about the political context, are responsible for the times we are living in. Ignorance became very relevant in today’s information politics. Since I am not living in the country I was born since almost 30 years, I am extremely sensitive toward the growth of the current xenophobic and racist movements. This fascist degeneration is even more absurd if we consider that most of the countries where it is increasing, are the ones that had their own huge migration issues in their past history.

ZP: Can you describe your usual creative process? For example, where does a new project start? Is it with a topic, place, material, shape, an experi- ment…?

MC: An idea can come from any situation: during a discussion, while you are dreaming, or after some drinks at a bar. Maybe the most important thing to enhance creative processes is to be close to people able to provoke and stimulate curiosity.

ZP: What are the main materials your work with and why? Did it change throughout the years?

MC: We mostly work with very light materials because we like the ephemeral sense of our lives. It is air which makes inflatables, not plastic.

PLASTIQUE FANTASTIQUE is a prestigious platform for temporary architecture founded in 1999 in Berlin. They have been influenced by the unique circumstances that made the city a laboratory for temporary spaces and have specialized in creating habitable installations as alternative, adaptable, low energy spaces for temporary activities. The lightweight and mobile structures have typical thin transparent layer that separates but also connects people and places and as a result makes the invisible visible. Plastique Fantastique has been activating public space for 20 years, drawing attention to crucial social topics and invite people to share it. Their large-scale installation travelled all over the world and you can currently see their work Blurry Venice at the Venice Biennale.

ZUZANA PACÁKOVÁ (*1986, Košice, Slovak Republic) is a curator, dramaturge and project manager. She studied conception and direction of cultural projects at Sorbonne Panthéon Paris in Paris. Organisations she has worked in include K13 – Košice Cultural Centres (Barracks Kulturpark and Kunsthalle – Košice Hall of Art) and Košice 2013, European City of Culture. She works in the cities of Košice and Bratislava as the artistic director of the international festival of art Biela noc (Nuit Blanche), which was brought to Slovakia through her initiative. As dramaturge she has contributed to The Return of Water to the City, a site-specific festival in public space in Košice. She has also worked as coordinator of the Oskár Čepan Award (2016 – 2017). Zuzana Pacáková is a member of STartE, a Paris-based association of young cura- tors, and a member of the international network IN SITU Network, Lieux publics, which matches art with public space. She teaches Cultural Management at the Economic Faculty of the Technical University in Košice.