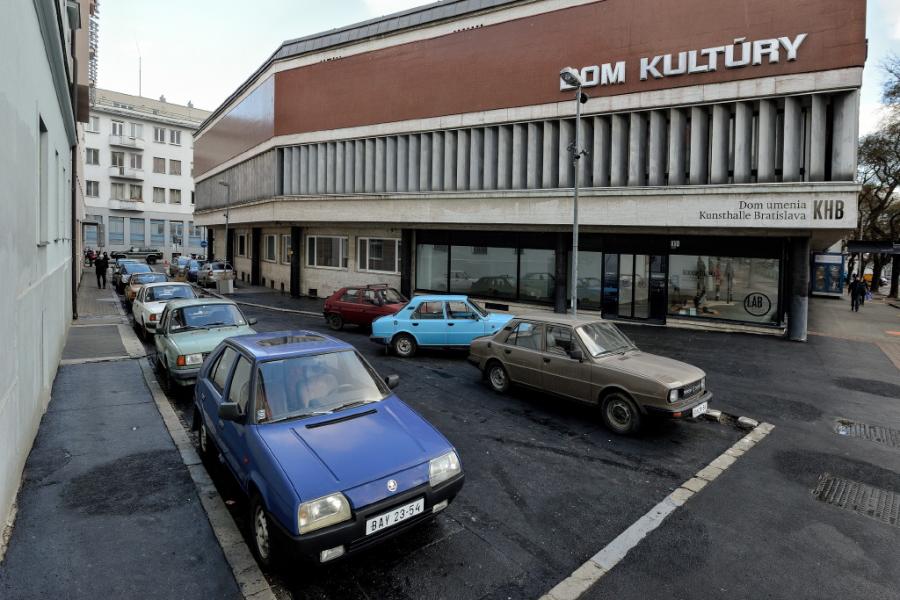 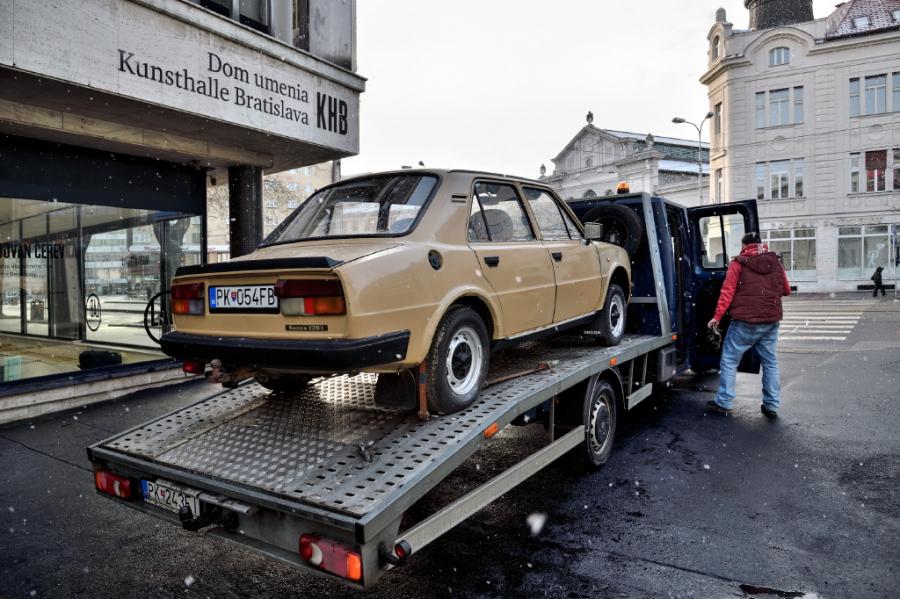 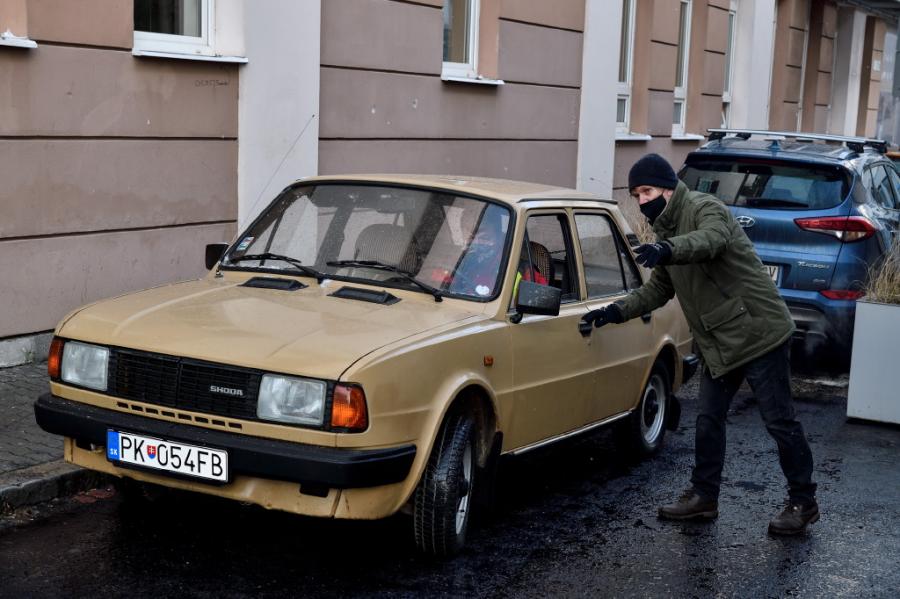 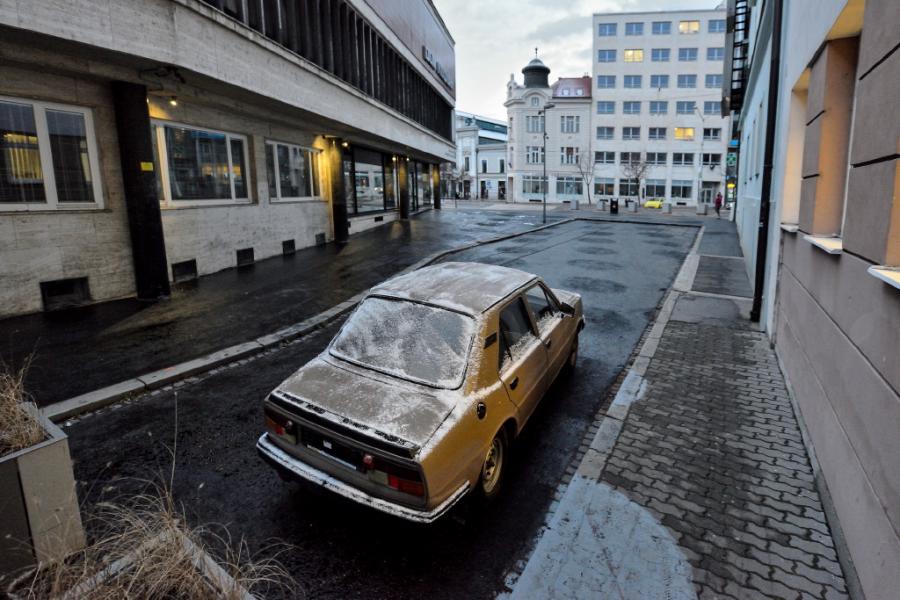 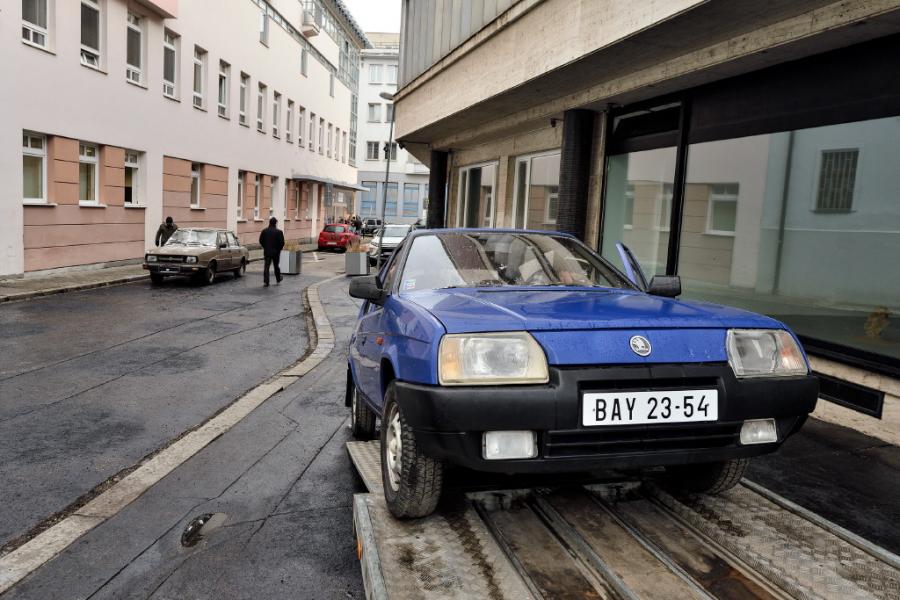 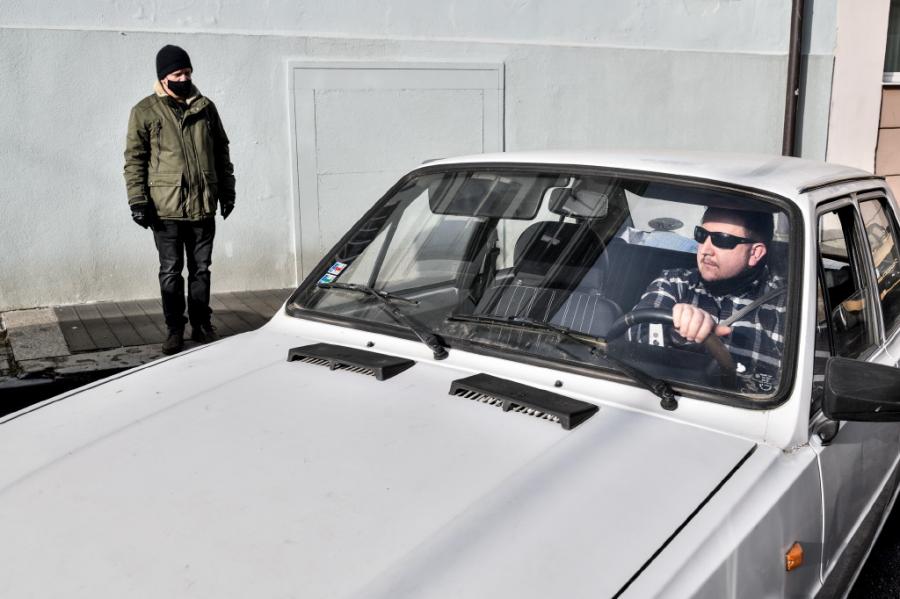 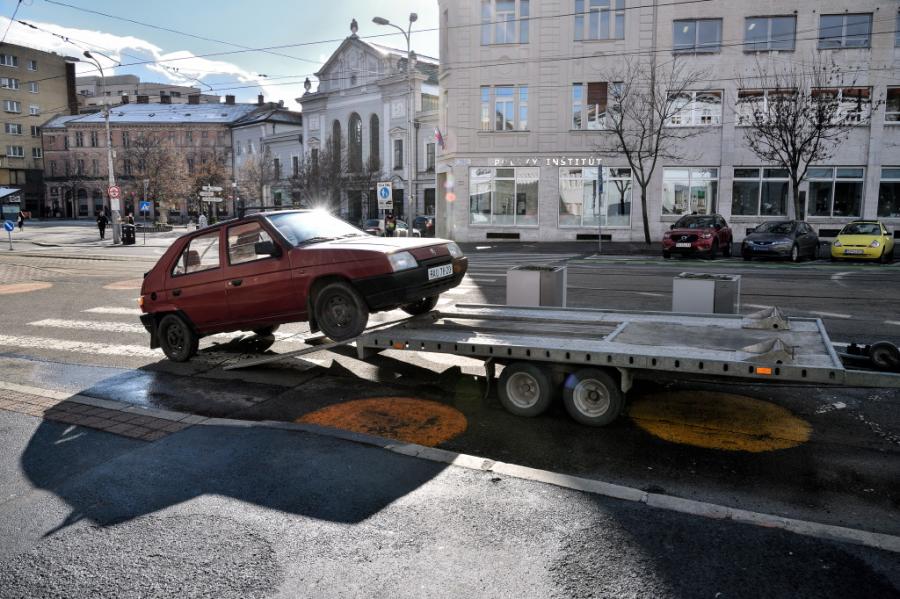 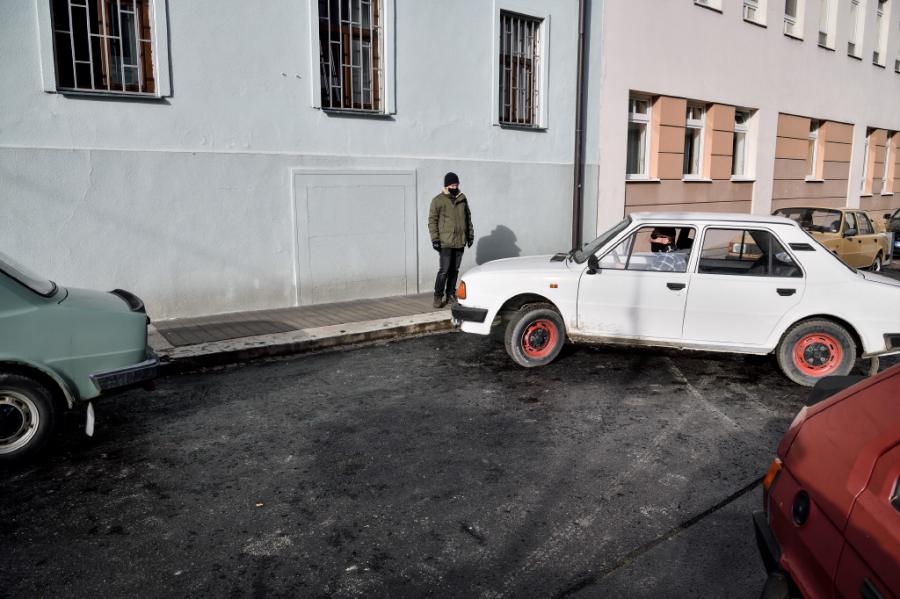 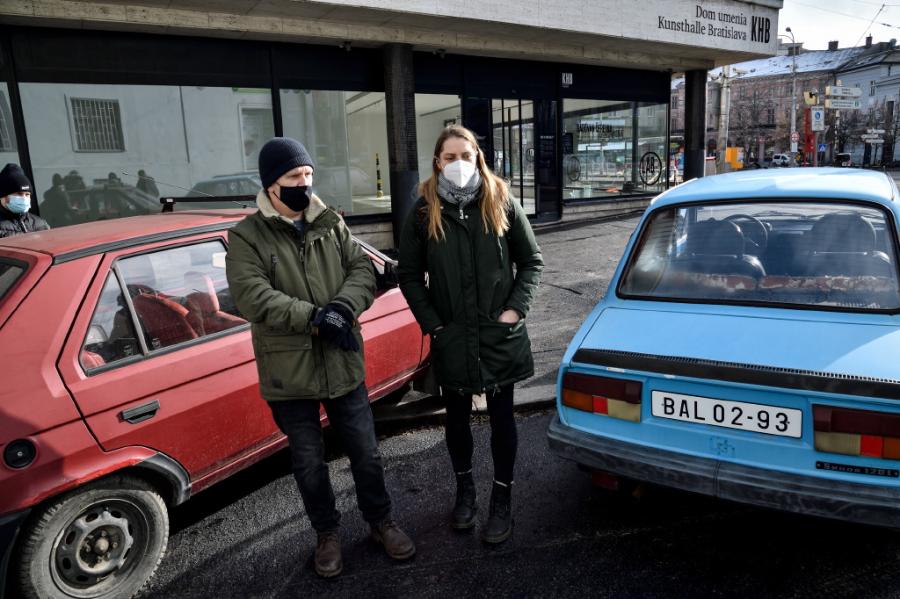 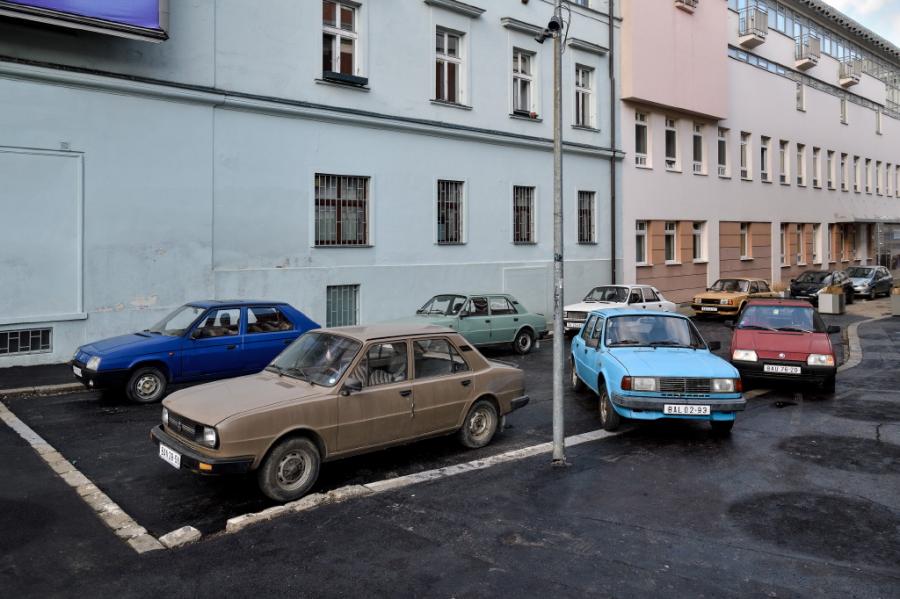 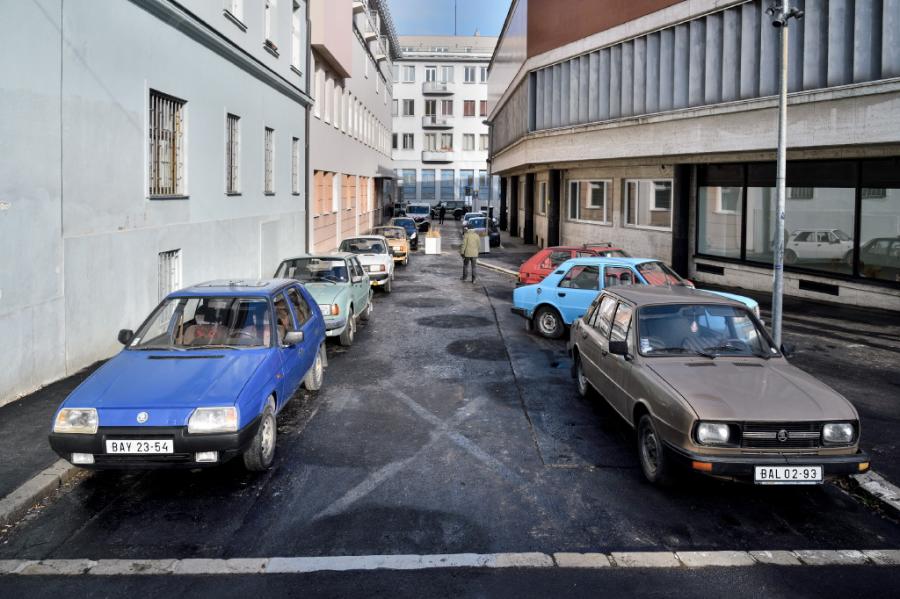 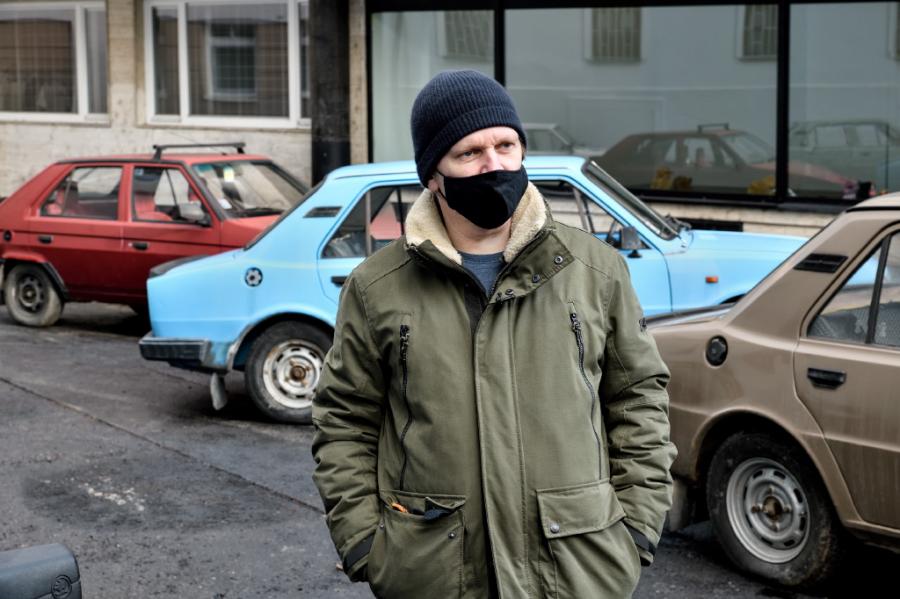 The Škodas were originally exhibited in 2001, as part of Ausgeträumt… (End of a Dream…), curated by Katrin Rhomberg in the Viennese Secession. That exhibition mapped the art of Eastern Europe ten years after the fall of the Iron Curtain, exploring the specific feeling after this lapse of time. In the exhibition’s accompanying text there is a definition of the basic alignment from which the curator was proceeding, and which also inspired the production of Ondak’s work:

“Ausgeträumt… addresses a principle atmosphere of the present, one of disillusionment, almost resignation, through which the social and political realities in broad sections of Europe, outside the realm of geopolitical demarcations, are perceived. It is a very general atmosphere that is variously motivated, depending on different ways of living, but which many nevertheless find inevitable. The collapse of real-socialist systems led to the triumphant formulation of a seemingly natural connection between democracy and capitalism. To this extent, the end of the confrontation of systems between east and west triggered an abundance of projects. The propagated economic prosperity due to global capitalism, the suggestive power of the media, the promises of new communication technologies, all of this led many to believe, for a brief period, in the dream of a somehow better future. It seemed that comprehensive democratization, in which all citizens could directly participate at last, was close at hand. Political reality, however, soon revealed the hopes tied to this dream to be an illusion.“[1] We are experiencing a very similar feeling, however, even today in 2021. All of the above more or less matches the present-day reality, which was, perhaps, even reinforced with the lapse of a further decade.

The Škoda cars were of Czechoslovak manufacture (from the late 1970s to the first half of the 1990s), with Slovak identification plates. When parked outside of Secession, the exhibition space for contemporary art in Vienna, they evoked a disquieting feeling of threat among the Viennese, signalling the suspicious presence of poor Eastern Europeans at a time when warning signs in Czech and Slovak had been appearing in Austrian supermarkets: Do Not Steal! The longed-for integration of the Europeans behind the Iron Curtain was not accepted with equal enthusiasm on the other side; it brought with it various unexpected and uncomfortable[2] situations. The parked Škodas in the centre of Vienna unsettled the nerves of passers-by, calling up associations of danger, illegality, black market and smuggling (which was flourishing at that time on Vienna’s periphery). They awakened a latent, slumbering xenophobia; many Viennese until then had not even been aware that they carried it within them. Ondak here radically (and yet at the same time quite unobtrusively) highlighted the unequally distributed power relationships which dominated the art scene and the entire geopolitical reality in which countries of the former West enjoyed, and continue to enjoy to this day, higher status and privileges than the others. By its many-layered agency, his work opened up (and still opens) questions about the process of “catching up with the West” and means of learning from it and from the self-colonisations of the former eastern regions, which has been addressed by theoreticians including Alexander Kiossev[3], Jürgen Habermas[4], Boris Buden[5], and many others.

The abyssal difference in self-confidence, linguistic equipment, economic opportunities and education, was revealed as enormous, and the former eastern bloc is still coming to terms with this to the present day. That was why Ondak’s gesture was so fundamental and why it is topical even today: using a language comprehensible to western art, but also to the ordinary non-artistic public, he has touched the neuralgic point of the relationship between West and East. The Škodas had resonance in whatever it was that subliminally remained between Austria and Slovakia at that specific time, space and context. They were a reflection, an emotional metaphor of the difference between two parallel economies and cultures existing in close neighbourhood. They were a timespace in a nutshell. A freezing of a situation brought 1:1 from Bratislava, where at that time those cars were normal: they had simply been brought to the other timespace reality of nearby Vienna. Ondak applied similar principles of copy-paste, mimicry of reality or déjà vu, in numerous works of his, including Good Feelings in Good Times (2003), Measuring the Universe (2007), Loop (2009), Zone (2010), and many others.

According to the curator and art critic Jan Verwoert, the aesthetic, ethical and political importance of the works of Roman Ondak consist in this, that they point to what it means to live in different economies of time. For him, SK Parking for example means posing questions about different economies of time from the political standpoint. The Škodas were parked and unused for two months, torn out of their ordinary economy of time.[6] According to Jan Verwoert, the Škodas symbolise the Secession, referring both to the building and the institution outside which they are parked[7]; they are a deviation from the normal, interruption, break in time, and therefore they have become a certain kind of monument of the emptiness of time – here there’s a non-presence of owner, their surrender for a spell of time in favour of the medium thanks to which they too make a living, an absence all the more striking on that account. The Škoda, with its bizarre and penurious appearance to western eyes, was, as Roman Ondak says, a symbol of the economic decline in the last years of Czechoslovakia, its non-synchronicity with West European development. As Georg Schöllhammer points out, Ondak worked with a temporality preserved and accumulated in objects themselves and with a historical space which he looked upon as simultaneity. The moment of movement or transfer appears in many of Ondak’s works; this time, however, the artist worked with the motif of motionlessness (of the means that enable motion), conservation of the given situation. According to Schöllhammer, Ondak’s works always contain both things: real placement and its double; a non-place of the action and its representation and exchange of roles.[8] Among other things, Georg Schöllhammer was captivated, for example, by the colour gamut (incomprehensible for the West) of the Škodas, so unattractive and freakish for the commercial capitalist world of Vienna.[9] For the inhabitants of former Czechoslovakia, on the contrary, the Škoda was quite a luxury commodity.

There is an interesting parallel, not outdated even today in contemporary Bratislava: cars park in a highly visible, privileged place in the centre of the city, where parking is permitted only to the elect. This also used to be the case in Vienna, and precisely for this reason the Škodas evoked questions and ill-feeling, but also curiosity. Right there on Treskoňova Street in the centre of Bratislava, the work is controversial, this time round from the standpoint of the city’s parking policy.

The cars for the Ausgeträumt… exhibition were lent through friends[10]; it was an action charged with adventure, since it was not easy to get such technically sub-standard cars across the borders. Some of them made it through the frontier crossing only after repeated attempts. In the carpark beside the Secession there were some free spaces remaining; occasionally even locals parked there, coexisting for a while, marking out their mutual space. Someone might have seen only parked Škodas. Those were, however, in reality “only” parked Škodas, but even then their effect of otherness functioned authentically, and that irrespective of whether they were regarded as art.

In connected with the situation then, Roman Ondak recalls: “The atmosphere of the 1990s, obviously, was different from that of the 1960s and 70s. Nothing was happening here; art institutions were almost non-existent; it was pointless creating an art of the object type. So I said to myself that I’m going to create something that’ll be masked in reality.”[11] Currently art institutions do exist, but many of them show residues of the functioning of cultural practice from the times of socialism or the period immediately following after it. Here, too, one may borrow Alexander Kiossev’s metaphor of self-colonisation, as rendered in this passage: “The import of institutions takes a special form amid this perennial bickering between high and popular culture. Similar to the situation in the real colonies, the institutions in the self-colonizing cultures were not created in a process of ‘habitualization’—i.e., incremental maturing and adaptation turning them into unquestionable and long-lasting, habitual practices. They were imposed by sweeping modernizing gestures of the elites who scraped them together and legitimized them in a broadly Westernizing—and very often eclectic and inherently controversial—manner. In this process there always remained a whole lot of things impossible to import—the practical know how, the habits, and routines, the well-established ethos, the roles and rules in the everyday performance of an institution.”[12] And this is also the case of Kunsthalle Bratislava, residing in a House of Art which is linked with the practices of the former regime par excellence. The Kunsthalle itself functions in a framework of cumbersome bureaucratic limitations set by public administration, which are often difficult to reconcile with the needs and ideals of the dynamic, progressive operation which it is expected to achieve. Hitherto, the heritage of the old socialist regime has not departed even from the Kunsthalle’s building. Many of its corners, and much of its functioning, breathe the atmosphere of those times when the currently exhibited Škodas were actually made.

_______________
ROMAN ONDAK (*1966, Žilina, Slovakia) is today regarded as one of the most notable representatives of neo-conceptual strategies. His unusual creative stance makes him one of the most striking artists of the past decade. In his visual art Ondak makes new use of the world’s reality, by staging it or employing contextual shifts. He grips the viewer’s attention with incessant contradictory transpositions of meanings, in places where we are accustomed to expect something stereotypical. Precisely by this quality of mutability, his works and installations address the viewers with great intensity.

[2] An expression used by Anetta Mona Chişa. In: Nepohodlné dedičstvo a sebakolonizácia (Uncomfortable Heritage and Self-colonisation). This paper is part of a publication from the colloquium Der Drang nach Osten. Paralely k postkolonializmu a kolonialite v stredoeurópskom priestore (Der Drang nach Osten. Parallels to Postcolonialism and Coloniality in the Central European Region), which was held in November 2010 in Bratislava.

[5] Buden, Boris. Konec postkomunismu. Od společnosti bez naděje k naději bez společnosti (The End of Postcommunism. From a Society Without Hope to a Hope Without a Society). Prague : Rybka Publishers, 2013.

[10] Ondak, in achieving his works, has often cooperated with close friends and relatives.

We would like to thank the mayor of Bratislava – Staré Mesto, Mrs. Zuzana Aufrichtová, for her support of the project.