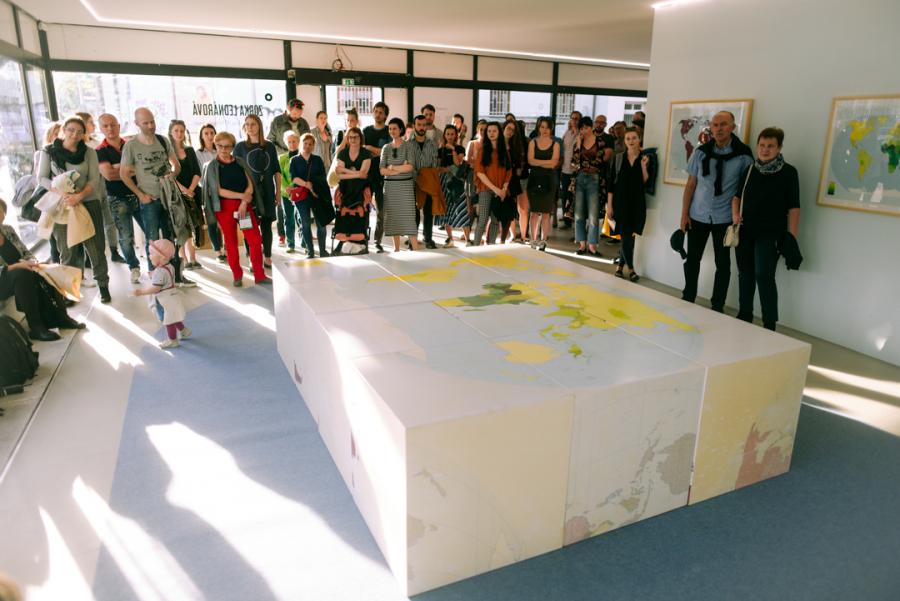 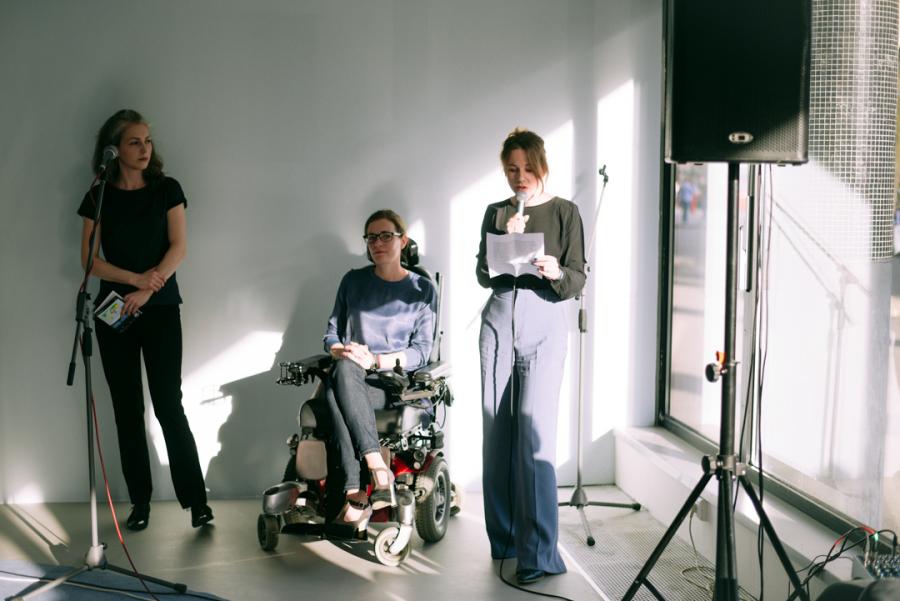 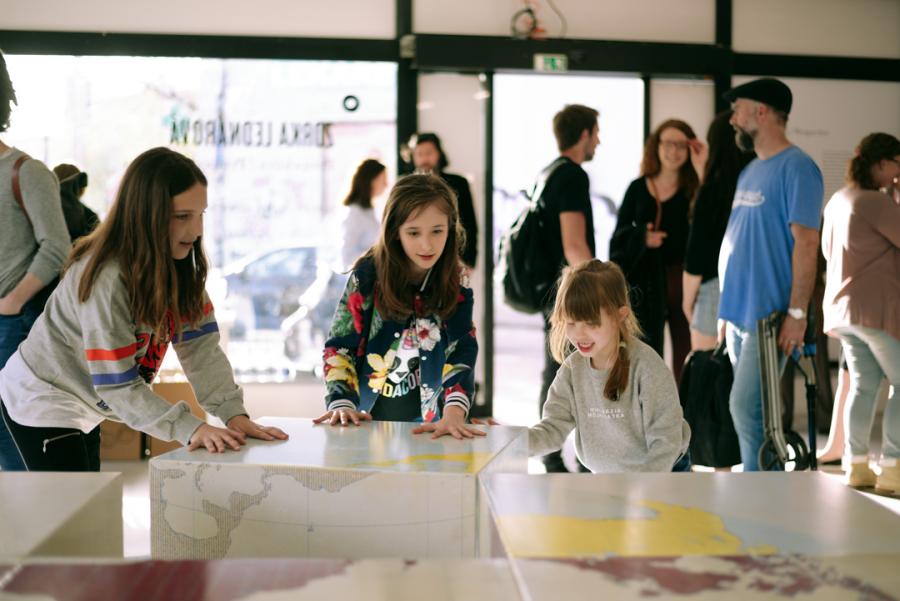 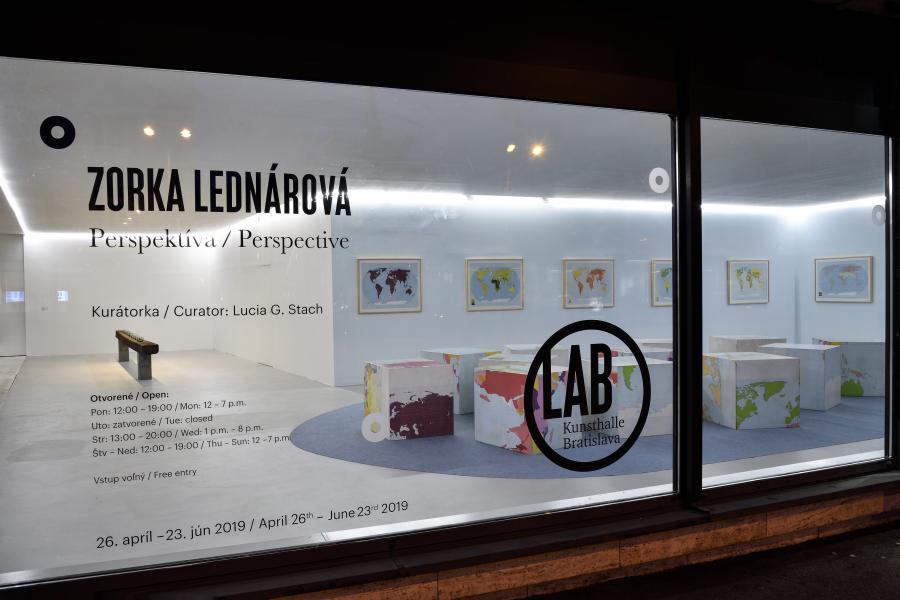 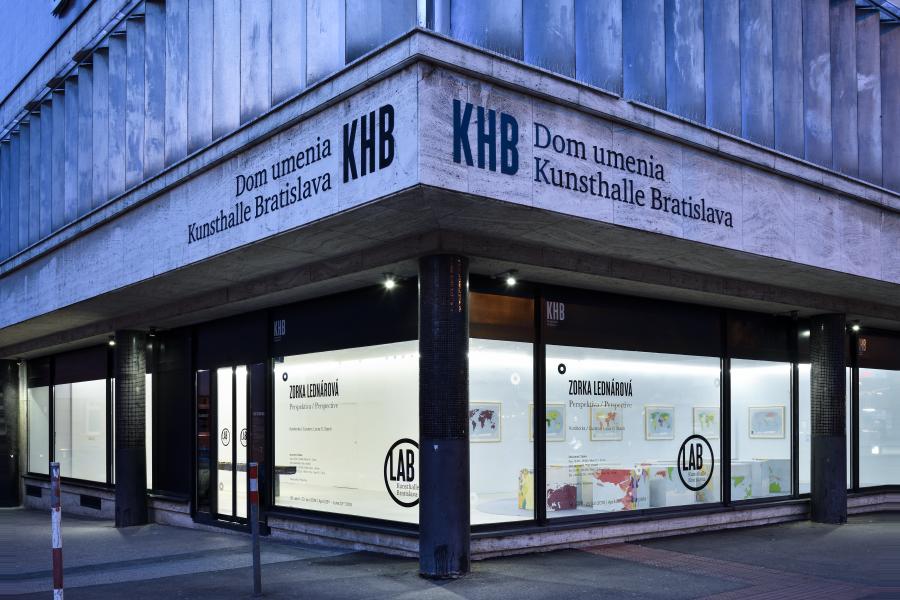 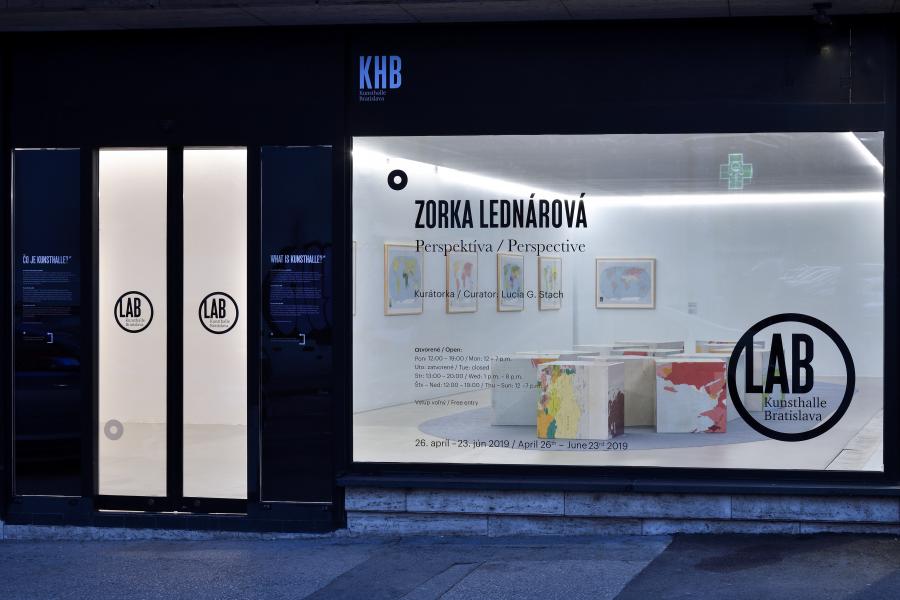 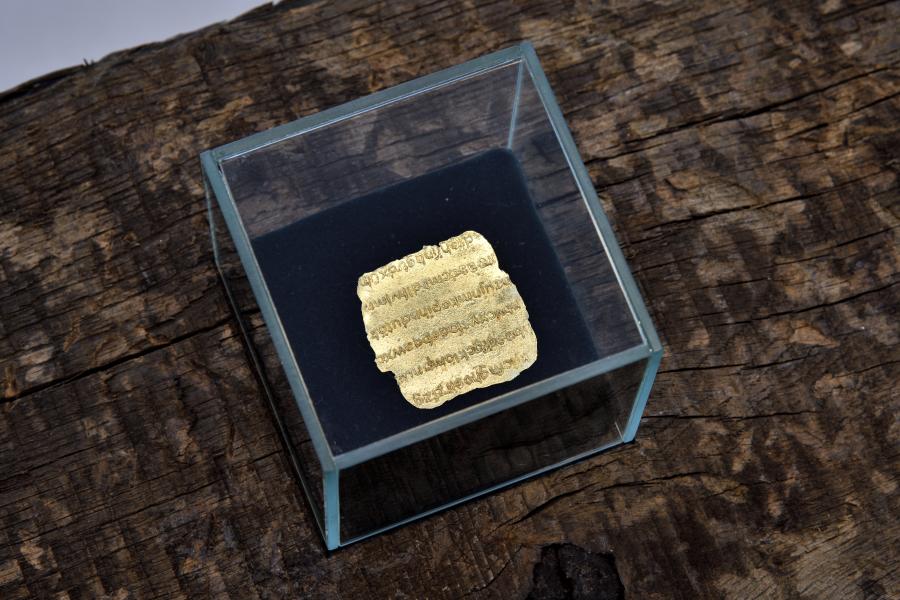 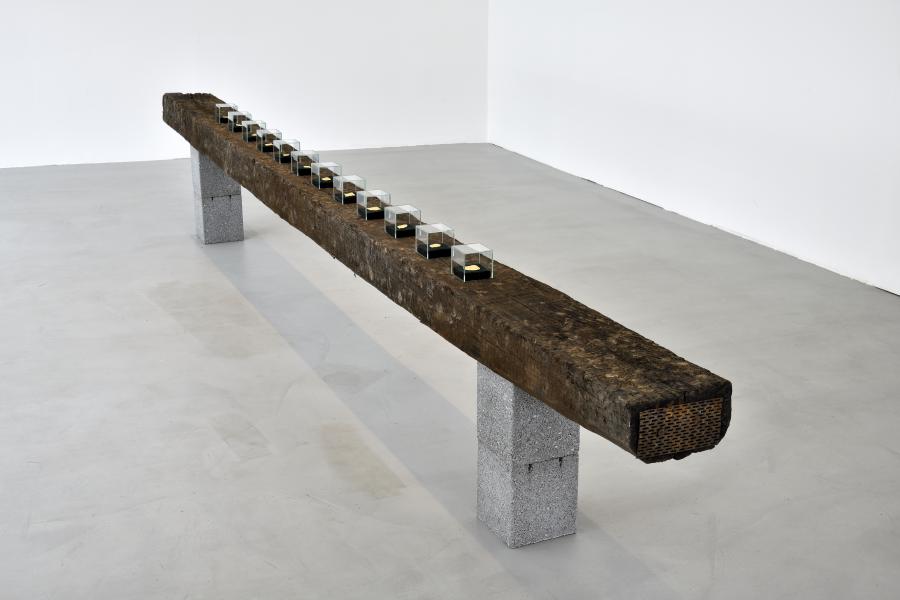 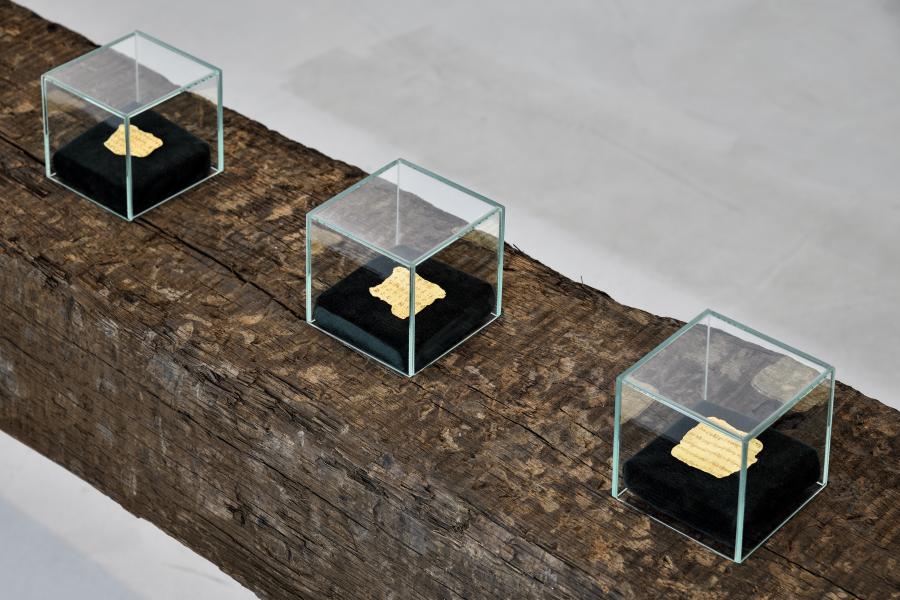 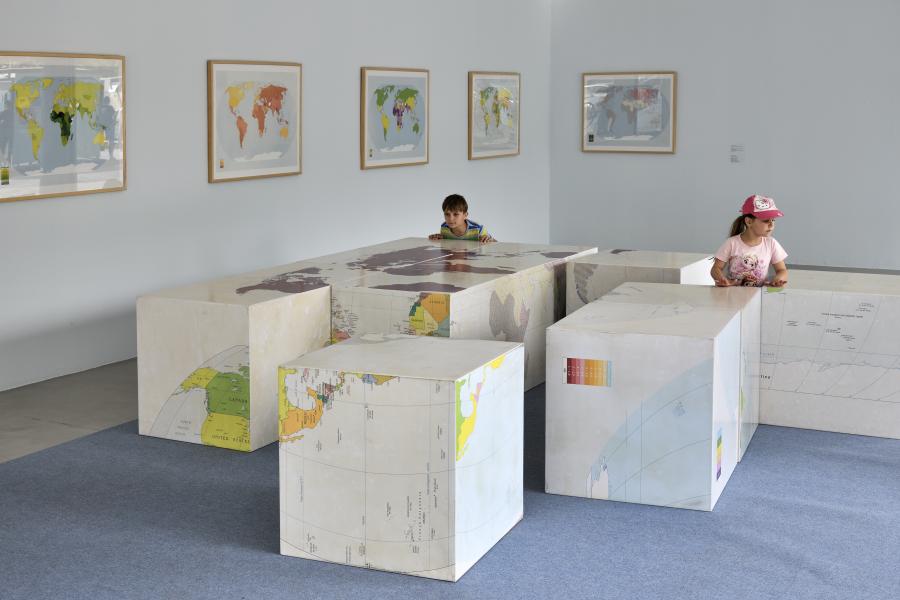 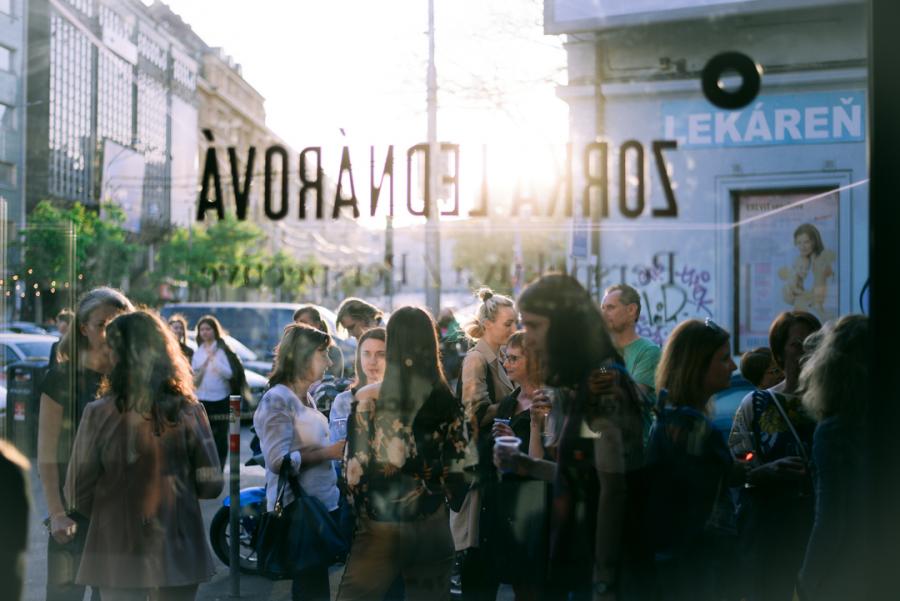 Zorka Lednárová belongs to the generation that had their childhood during socialism and lived their youthful years in a period of turbulent transformation of the hitherto known world. The opening and dissolution of borders, freedom of expression and movement, together with the post-revolutionary atmosphere of utopia, hopes of a more just and freer society – all of this inevitably entered the work of young artists. For Lednárová, however, these themes were much more radical. Her approach makes it obvious that the ideal world as she conceived it did not include borders, that for her the narrow demarcations of identity and culture were always too confining. It is no coincidence that what she addresses critically in her works is principally borders, barriers, and their mutability and two-way permeation. Sensitively she perceives the reality of the world, with the changes which globalisation has brought, as well as the migration crisis and climate change. Her open attitude and capacity to see connections in a larger picture has been proven also in life: she is the only female monumental sculptor of her generation, and she was one of the first students who, after the Velvet Revolution, left Bratislava to study art and sculpture in Germany and later in China, where she also gained a prestigious invitation to create a sculpture for EXPO 2000 in Hangzhou. For this sculpture, she used a “rolling stone”, formed by thousands of years of straying along a riverbed. After some sculptural modification, she set three lenses of varying sizes in the stone: convex, concave, and flat, representing “three mirror images, three perspectives of one reality”. After some sculptural modification, she set three lenses of varying sizes in the stone. Her work was also praised by Chinese art critics. They appreciated how this artist was able to combine the individualist Western outlook on the world with traditional Eastern thinking, with the emphasis on Nature, on a whole where the human being too has a place. The syncretic mode of thinking in forms and ideas has remained typical of her work.

Lednárová visually combines a variety of scripts and sign systems, using the map as an indexal sign and image of a designated, appropriated territory. Manipulating its symbolic apparatus, she critically analyses power as a political force and the desire for power and domination as a feature of human nature. On the other hand, using a cartographic language she shows the world as a single living organism constantly transmuted by the mental activity of its inhabitants, which develops freely outside of state borders and often in spite of the political organisation of countries. She reminds us of a thought of Sándor Márai’s, that things and phenomena do not exist purely in themselves: we look at them through various angles of vision, from different distances, with heterogeneous initial information. This type of metaphorical thinking and awareness of the mutability of borders has a peculiarly tragic flavour in Central Europe, “scarred” as it has been in recent centuries by the frequent alterations of borders and political systems and by violent events which affected millions of people. Perspective in the exhibition’s title is therefore a key concept, through which the viewer makes a discovery: via the different scales of objects in the installation, he/she discovers the artist’s Calvinian idea of language as visual and sonic, as well as the sensual and emotional possibility of capturing the world and its changes in the layers, forms and attributes which compose it. Language is a system in which he/she also actively plays a part. Through the fixed point from which we observe, it points to the future and is a challenge to individual and social responsibility for the future in question.

Signs & Locations is a series of works produced from 2003 onwards in various media, from graphic art to a strategic computer game (2004). In the artist’s words, “concealed in every human being is a desire for power over something or someone. This desire influences the development of society through the decisions of specific people, and its fulfilment often depends only on the character of the individual. A computer game offers an opportunity for a moment to change the world according to one’s own fancy, to dominate and to feel like a conqueror. The map of the world becomes a playing field where a variety of scripts dissolve in one another. They expand over the limits, to the point where they become something aggressive, unbounded, and stripped of its original meaning”.

In the interactive spatial installation Signs & Locations – Building Global Cubes (2007) she used twelve large wooden cubes, reminiscent of a child’s meccano set. The viewer may change their arrangement and thus create six different maps of the world, “which apart from political division illustrate the indices of education, corruption, writing systems, and indicators of prosperity and culture under the impact of globalisation”. In her own words, the artist wishes to offer “a different view of various problems and thus to offer an opportunity to perceive connections and continuities”.

An installation of objects entitled 2000 CE (2001) presents pseudoarchaeological objects as a fragment, a fictional testimony, of the time of human history. Small porcelain objects, gilded with 24-carat gold, on which specimens of twelve contemporary, officially used writing systems have been cast in relief, are shut in twelve glass boxes. For Zorka Lednárová “the emergence of writing has such importance for human society that it can be compared to the mastery of fire. Writing demands a certain sense of abstraction; it presupposes sensual, symbolic and communicative qualities. It serves as a means for retaining, amassing, arranging and conserving experiences, knowledge items and ideas, and thus it becomes a basis for further acceleration of the development of mankind”. The signs torn out of context have lost their meaning, or their secret is concealed in cipher or in an incorrect use. Subsequently they represent objects of desire and nostalgia, rather than a message which the viewer might read. Instead of that, the viewer gradually arrives at the fact that universally valid and firmly-established systems are actually mutable and fragile, because they are subject not only to the extremely subjective activities and motivations of people but also to time. The meta-theme of time in the entire installation is not at first glance apparent. It consists precisely in the viewer’s becoming aware that he/she cannot simultaneously perceive the different time layers which the artist has elaborately synchronised in the exhibited works.

Contrasting with the gold and the porcelain there are railway sleepers: coarse and long-used wooden blocks distinctively reeking of tar. “Travel” today, according to Irit Rogoff, comprises a tremendous number of metaphors of displacement, such as movement, discovering, adventure, scholarly research, as well as uprooting, epistemological colonialism, crusades, ethnographic fiction, losing oneself and straying, plus also “in-betweenness” (Homi Bhabha) as a state of social consciousness. We must see Zorka Lednárová’s exhibition from the perspective of the present-day human being, living under the constant pressure of mobile categories without certain knowledge of one’s own territory and its stable map. One finds, however, an added value in uncertainty: the promise of new moments, the celebration of change and displacement as a principle of life.

ZORKA LEDNÁROVÁ (*1976, Bratislava) studied sculpture at the Academy of Fine Arts and Design in Bratislava, in the studio of Professor Juraj Meliš and Ján Ho städter (1995 – 2000); at Muthesius Hochschule für Kunst und Gestaltung in Kiel in the Department of Sculpture and Projects, with Prof. H. Brunner and R. Weißleder; and at the Chinese National Academy in Hangzhou in the Department of Sculpture and Calligraphy. She successfully completed postgraduate study, curatorship and art in the public setting, at the Institut für Kunst und Kontext at Universität der Künste in Berlin. Beginning in 2007, for eight years she led Okk/Raum 29 (Organ kritischer Kunst), an interdisciplinary dialogue of political art and activism in Kolonie Wedding in Berlin. Since 1994 she has regularly exhibited at home and abroad. From the position of an artist, activist and curator, Zorka Lednárová sees art and its institutions in contextual relationships. Programmatically she follows three main directions: her personally motivated visual art work; sculpture and installation for public spaces (always in close connection with the country and the city); and finally curatorship, with an emphasis on how art for social and political projects overlaps with the post-colo- nial and post-West agenda. In a series of works of a post-conceptual nature she has worked with the tension between global and local and begun to use her own interpretive code in cartographic language. For Lednárová the structure of the map has become an instru- ment for the expression of artistic and civic opinions, as well as a method for visualisation of global interconnections. Map and script have become, for her, symbols of culture. She lives and works in Berlin .

LUCIA G. STACH (*1975, Bratislava) graduated in the Department of Art History and Culture at Trnava University in Trnava, having in the course of her studies completed a study stay of one year at the Institute of Art History at Charles University in Prague. She acquired a doctorate at the Department of Theory and History of Visual Art and Architecture at the Academy of Fine Arts and Design in Bratislava in 2015. From 2000 she worked as an editor of DART, an independent periodical on visual art, and as a freelance curator, and from 2002 to 2006 she was curator of exhibitions at the Ján Koniarek Gallery in Trnava. Since 2010 she has worked in the Slovak National Gallery as cura- tor of the Collection of Modern and Contem- porary Graphic Art and Drawing and curator of exhibitions, and since 2013 as head curator of the Collection of Modern and Contemporary Art. In 2017 she was curator of an exhibition Jana Želibská: Swan Song Now in the Pavilion of the Czech and Slovak Republics at the 57th Biennale in Venice. She has prepared dozens of exhibitions as an independent curator. Lucia G. Stach is the author and co-author of several monographs and essay collections. She reg- ularly publishes in professional journals and participates in professional events, symposia and conferences at home and abroad.

Z. Lednárová: There are cities in Germany that would disappear without migrants (teraz.sk)
She overcame clinical death: I was angry that they brought me back (SME)