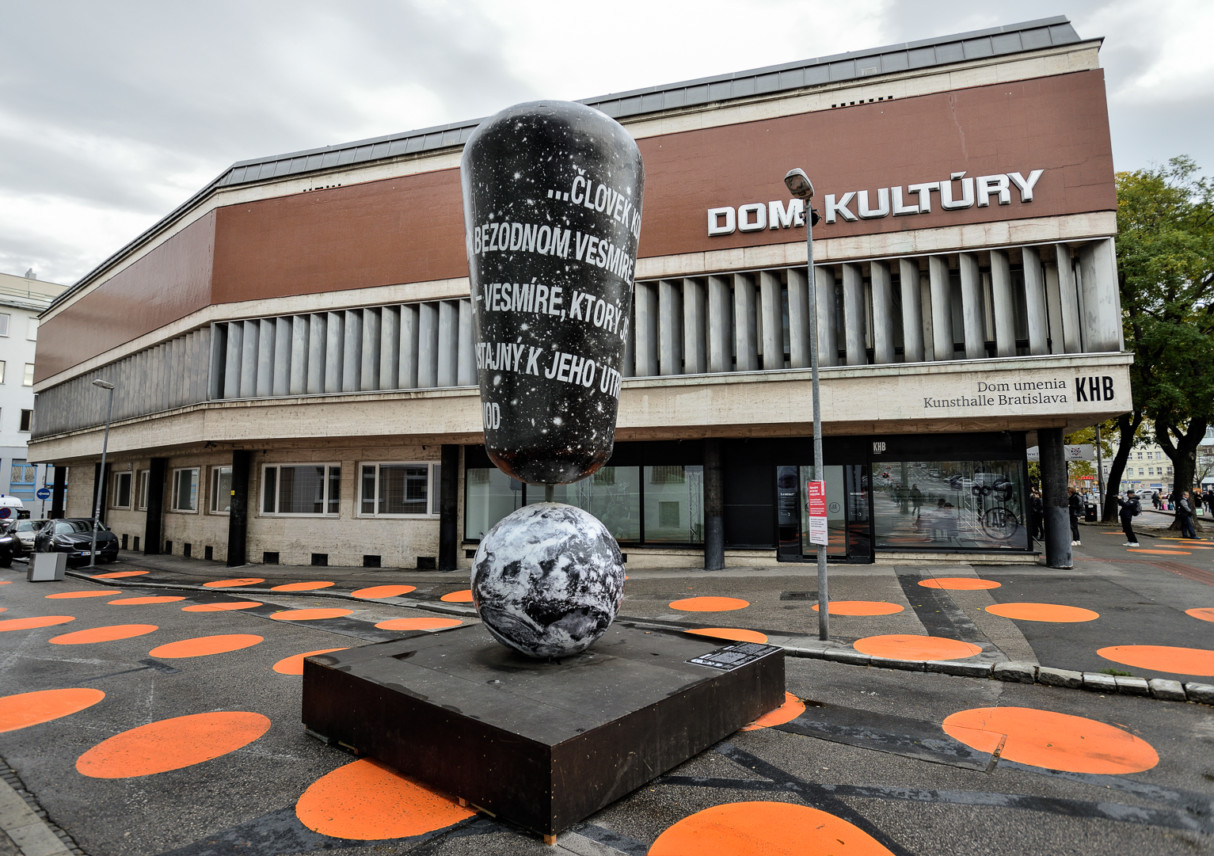 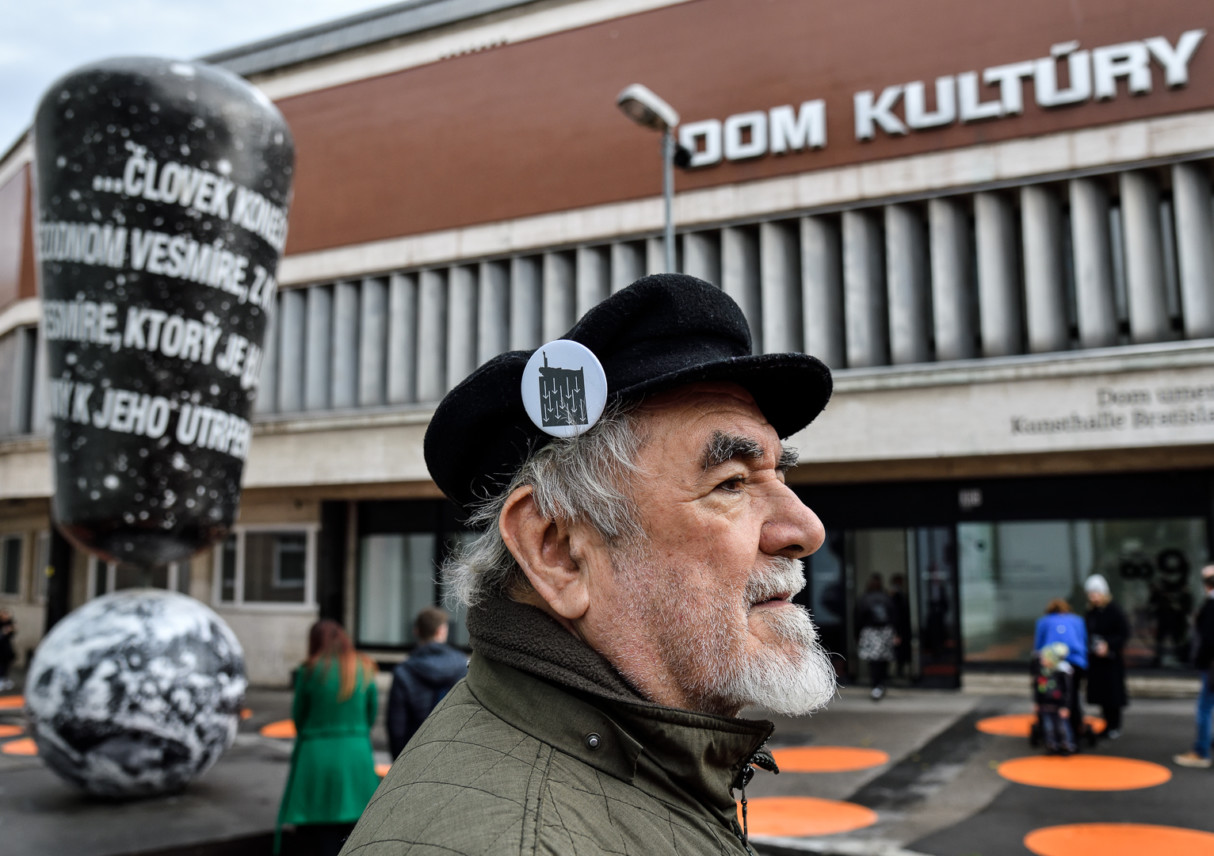 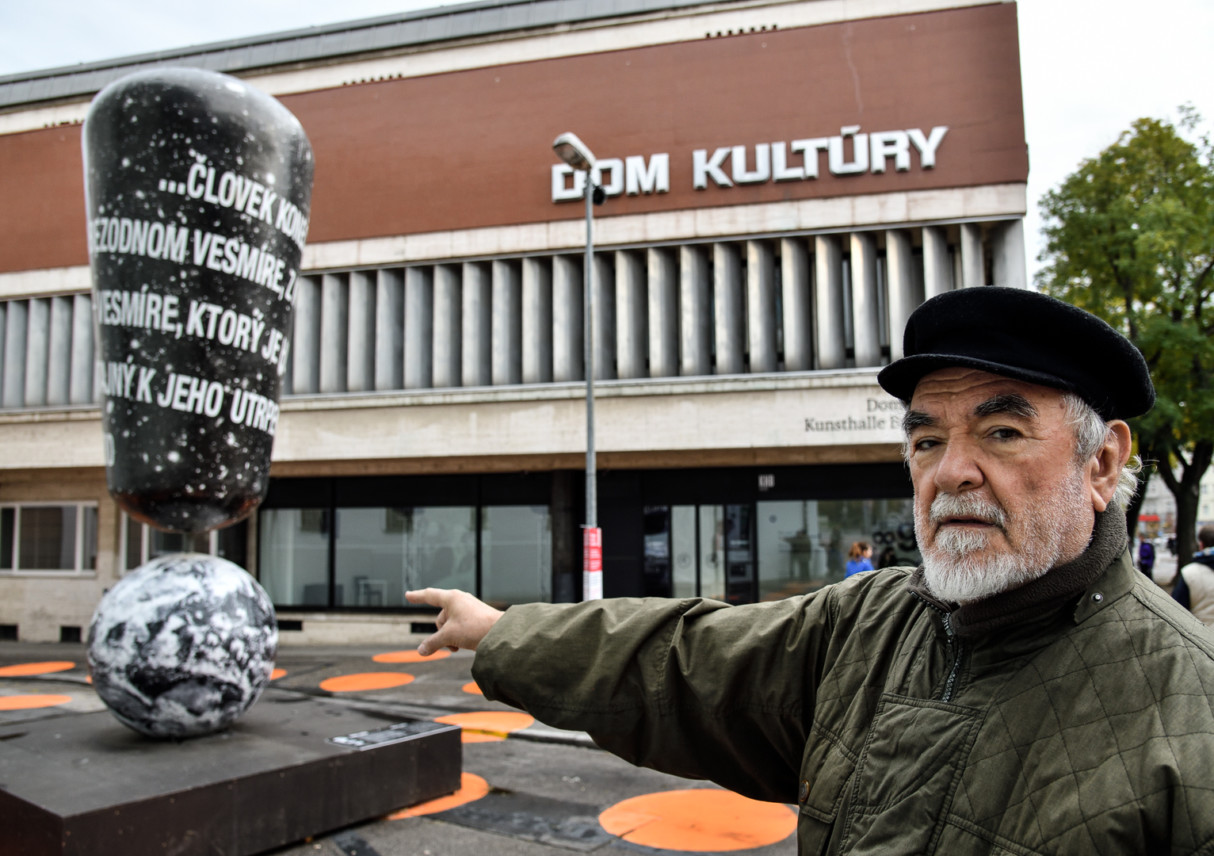 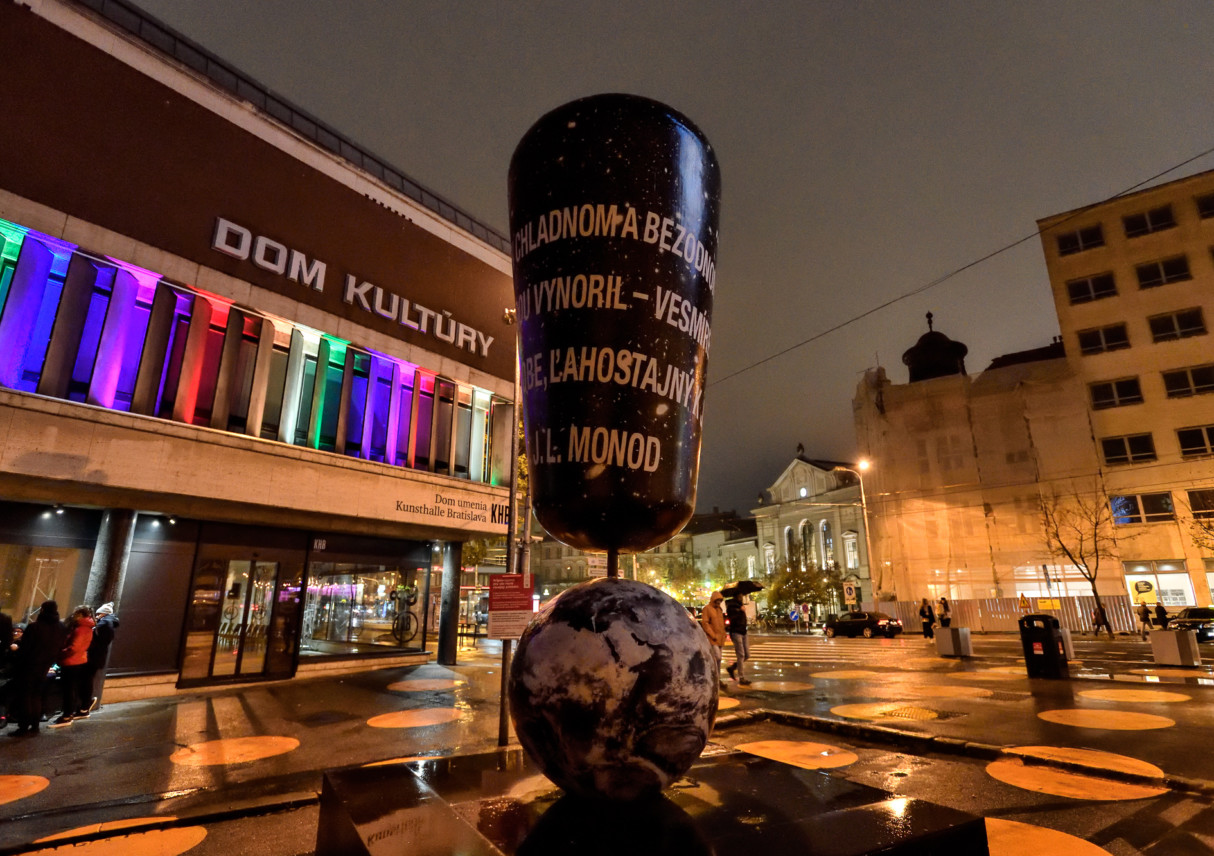 The appelative work Exclamation Mark (1974 – 2020) by conceptual artist Rudolf Sikora was originally created for the Youth Biennial in Paris (1975) and motivated by the then need to respond to the environmental issues. After more than 40 years, it was upgraded for his solo exhibition Eco(co)mix (2018) in the Bratislava City Gallery, only to ultimately fulfill the meaning of its message at a busy public space on Treskoňova Street. Sikora’s monumental work consists of a globe and universe, which together form the aforementioned exclamation mark, which signals a challenge. The exclamation mark is accompanied by a statement by the Nobel laureate Jacques L. Monod, written to Sikora in his own handwriting. The work is thus a critical reaction to our lack of responsibility for the environment. Kunsthalle Bratislava was aware of the currency of this artistic statement, which is now becoming more and more urgent.

In May 2020, on the occasion of the reopening of the Kunsthalle Bratislava, with regard to the current situation and issued precautionary measures related to the spread of the coronavirus, Rudolf Sikora has updated his art object Exclamation Mark. On the planet Earth, which is depicted as an exclamation point, he added the following inscription:

“Corona warns: Let’s not destroy the environment !!! Let’s avert an ecological catastrophe !!! The economy will not save us !!!”

The artist comments on the work: “The coronavirus pandemic has shown us that it is necessary to follow scientific knowledge. In a short time, everyone was able to mobilize and change their habits under the pressure. The pollution of the planet has been reduced for a while. If we were able to take these steps as a result of the pandemic, wouldn’t it be wiser for people to take steps to save the planet voluntarily? The whole world should now focus on tackling the climate crisis in order to avoid an environmental catastrophe. We will not be saved by anything other than well-thought-out and planned measures to protect the environment.”

___________
RUDOLF SIKORA (born in 1946 in Žilina) is one of the most important Slovak artists of the second half of the 20th century. In 1963 – 1969, he studied at the Academy of Fine Arts in Bratislava under the guidance of prof. Mille and prof. Matejka. In parallel, he also studied at the Academy of Performing Arts in Bratislava. As one of the first representatives of conceptualism, he exhibited his work as early as in 1970 in the famous Youth Gallery. During the normalization period, he was the initiator of several historically important activities such as 1st Open Studio or Bratislava Championships in Artifact Motion. He worked as a teacher at the Academy of Fine Arts in Bratislava and Faculty of Art, Technical University in Košice. In 1992, he was appointed professor. Since the 1970s, he drew attention to ecological problems. In 2016, he was awarded the Ambassador for the Environment title for his views and activities. He organized countless solo exhibitions (Against oneself, SNG, Bratislava 2008; Against oneself, NG Trade Fair Palace, Prague, 2006; Through the Medium of Photography, J. Koniarek Gallery, Trnava 2001; Observer, GMB, Bratislava, 1995) and group exhibitions.