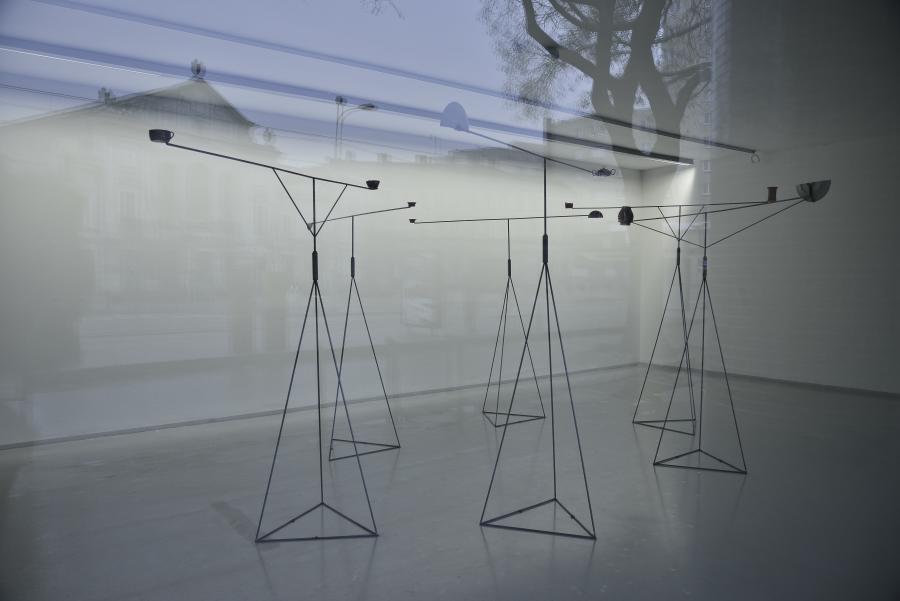 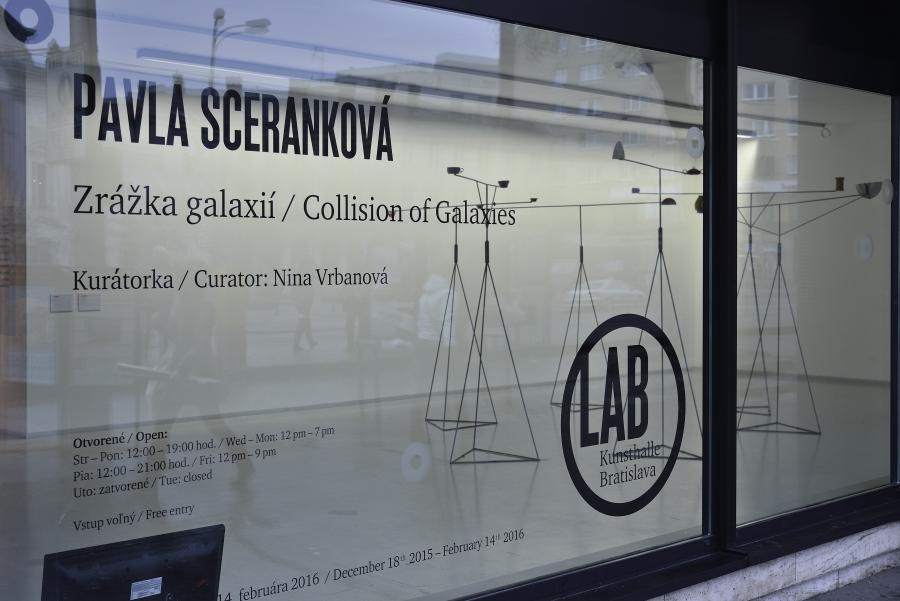 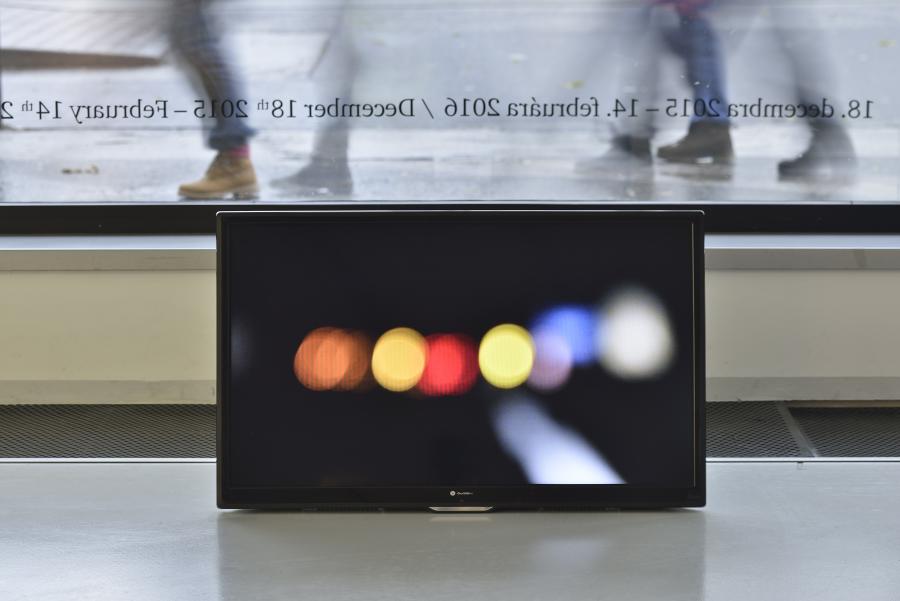 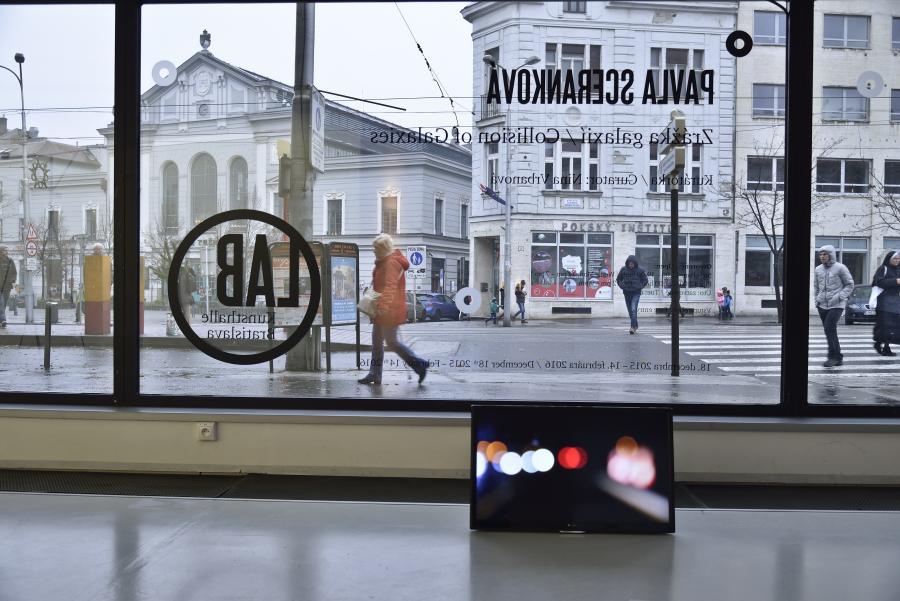 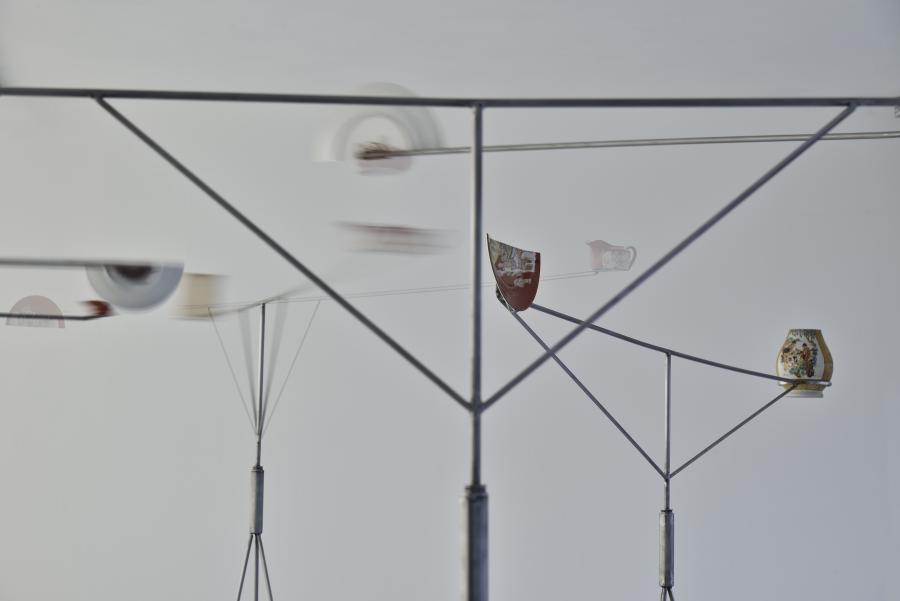 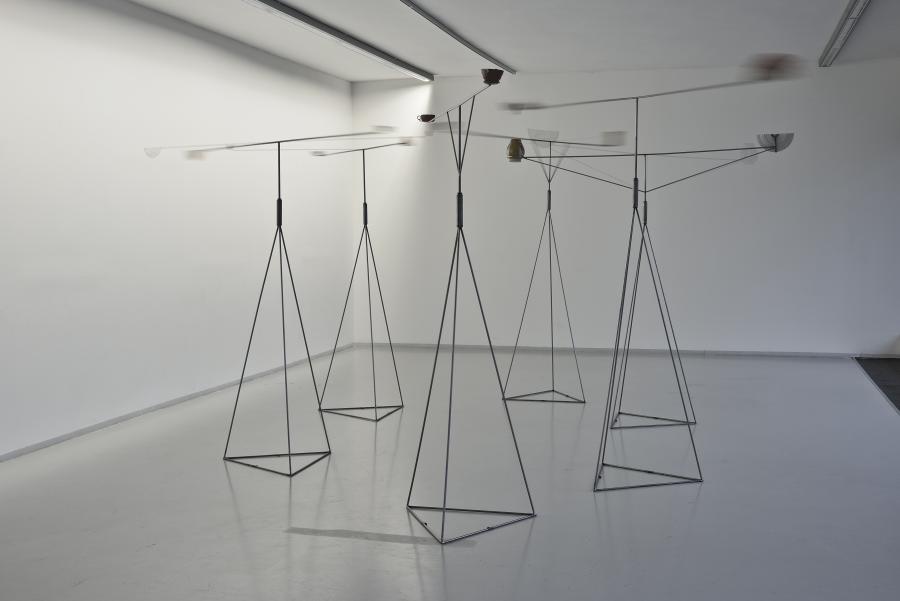 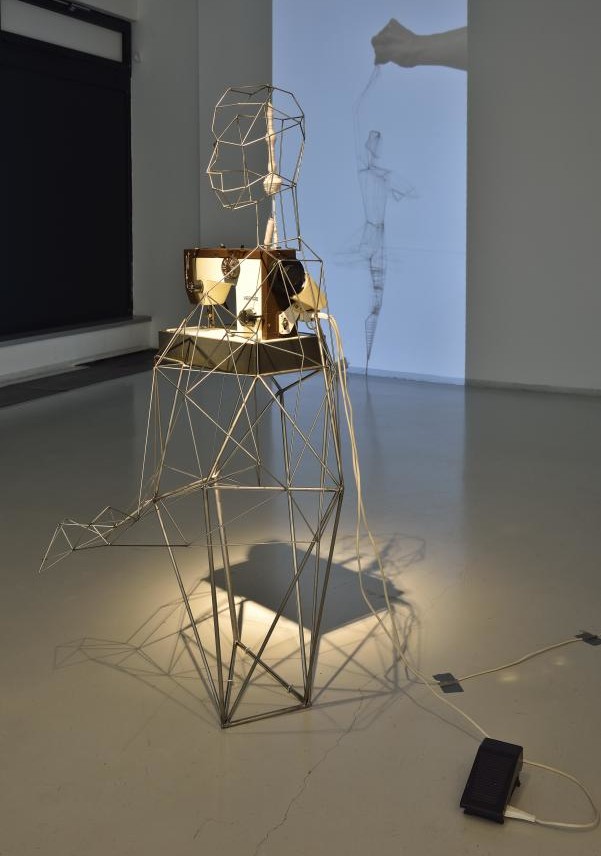 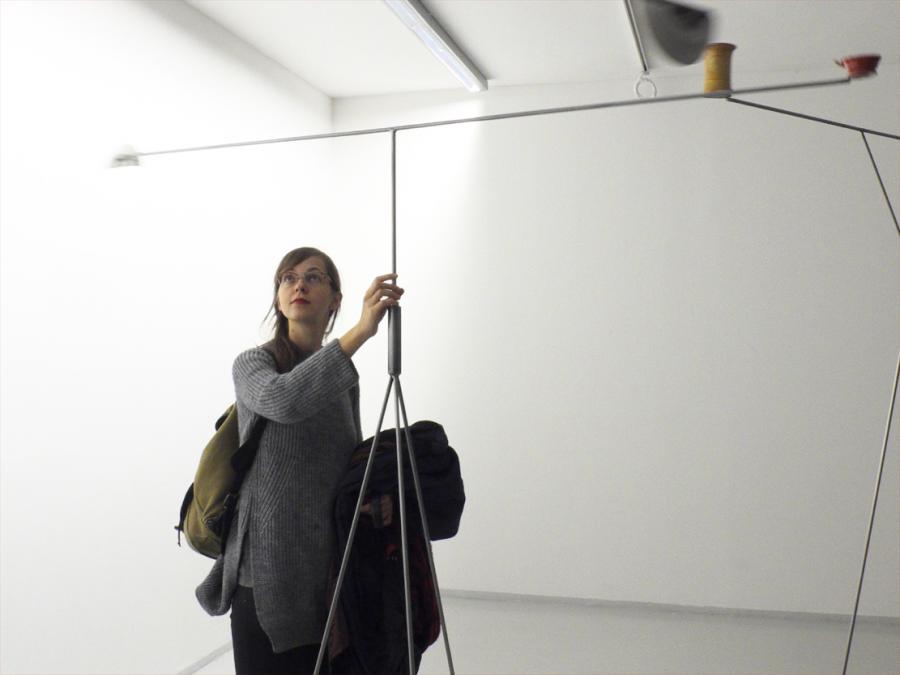 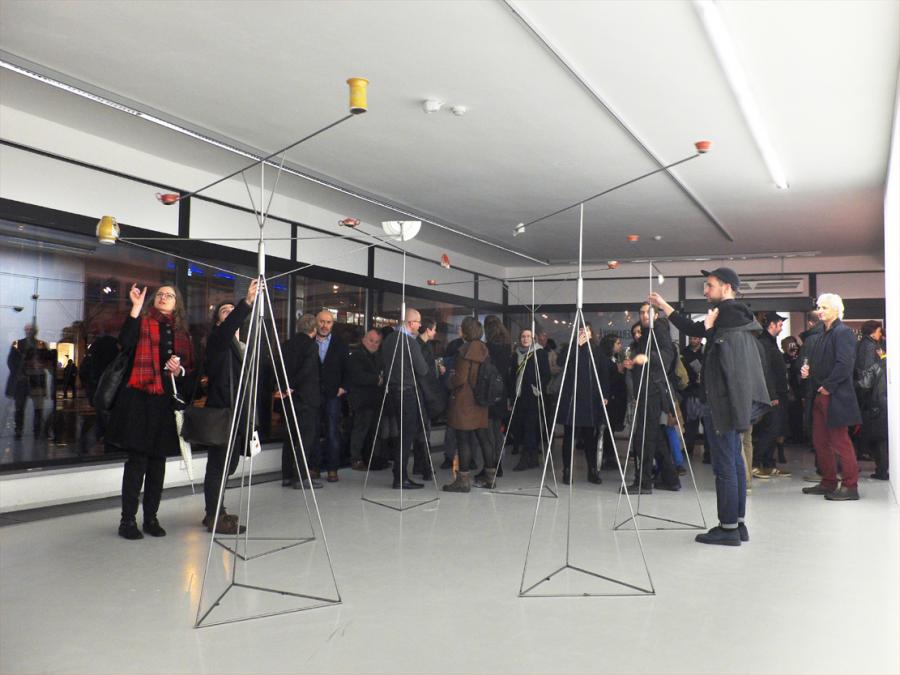 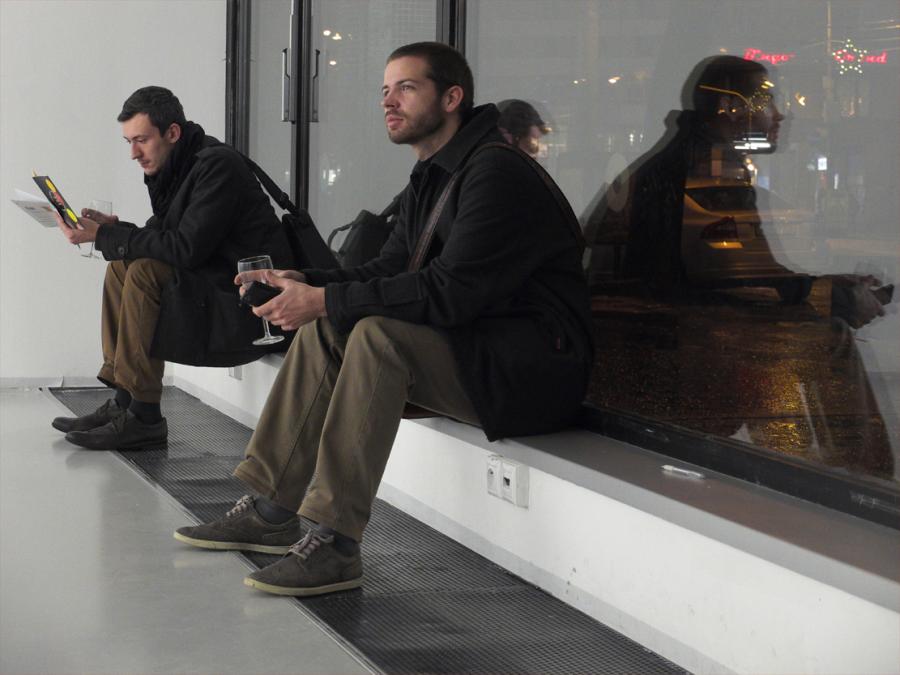 Two metaphors of the universe /or/ How the head sees

The exhibition Collision of Galaxies examines the recent work of Pavla Sceranková (*1980). It presents two seemingly related works that reveal two prominent subject matters and currently the most significant themes of her solo artistic program, putting them into mutual context. The interactive kinetic installation Collision of Galaxies (2014), the title of which symbolically encodes the leitmotif of the entire exhibition, embodies the movements and relations of celestial objects in analogy with the space-time of the Earth, i.e. the universe of life and human relationships. On the other hand, the construction of the object Veritas (2015), including the featured video, utilizes an integrated sewing machine, which swaps the “hardware” of the human body. The work associates a different type of the outer space – the universe of perceptions, ideas, and memories in the human head. Thus, the two related works serve as two metaphors of the universe.

Sceranková is one of the major representatives of the young Czech and Slovak generation of sculptors that emerged in the second half of the zero years. She studied at the Academy of Fine Arts in Prague, where she also received her Ph.D. During her postgraduate studies, she began to enrich her artistic program with her personal research of the possible ways of image formation in the human mind and their parallel storing in one’s memory.1 Already in the early stages of her work she explored the subject matter of personal memories, which inspired a number of installations (e.g. the cycle Memories as a New Reality, 2006). Originally, her works focused mostly on one’s private life including family, childhood, dreams or relationships through deconstructed furniture or the inner dynamics of different household items (e.g. the cycle A Visit Home, 2010). The fragile corporality of these objects became the carrier of one’s memory and emotionality.

If we put anything on a gibbous table, it would slide off and break. If we sat in a skew armchair, we would fall down. The tiny lamp couldn’t withstand the inner tension and exploded, and the back of the quilt chest fell off. As Ján Zalešák wrote in the catalog of Sceranková’s work, “the reason these things are put in a movement is far from any rational reasoning. The movement is often triggered by memories and emotions born from personal relationships – both of which are fragile, ephemeral and fleeting.”2 The instability, fragility and ephemerality of the perceived reality were often highlighted by the low-cost materials of the works. Style-wise, the customized old furniture, household kitchen equipment, cardboard or ordinary planks bordered between post-minimalism and arte povera.

The medium of sculpture has gradually become an anthropomorphic kinetic and dynamic carrier of emotions and memories. Robust or more sustainable materials related to traditional sculpture are used sporadically. The major part of her works now features mechanized or animated frames of different things, revealing their inner structure, processuality, and fragility of human perception. We are asked “what we see and how we experience it.”3 During her postgraduate studies, these tendencies transformed into abstract and rather universal visual features. Thus, the perception as such has become the major subject matter of her works, which have temporarily drifted from personal mythology towards contemporary scientific aspects of seeing, perceiving, remembering, etc. (e.g. The Art of Unmeasurable Scientific Questions I and II, 2011, or Mind without an Image, 2012).

The formerly intuitively shaped private space, characteristic for evoking tension, hesitation or fluctuation4, has been swapped for the mysterious universe of the human mind and its perception processes. These tendencies are present in the object Veritas, which also features the exhibited video. Even the seemingly abstract and geometric metal figure is apparently constructed from a number of different angles and points of perspective. Thus, the form of the incredibly fragile and optically disembodied frame refers to the creation of an image in one’s mind, illustrating that human perception works rather differently than, for example, a camera. While machine captures an entire figure within a second, human mind composes it from many visual points. Therefore, the shape and the form of the figure encode the process of our perception; the work is constructed to connote the way that the human mind or eyes see.

The author named this object after the eponymous sewing machine, which substitutes the “hardware” of our body. The depicted process of seeing and perceiving is highlighted in the presented video. It shows a thin black thread of the machine that gradually renders the body, shape, and details of a similar figural frame. The perception process is literally drawn by the thread. Sceranková visualizes the premise that the way we see the world primarily exists the way we perceive it and think about it. Together, the object and the video Veritas embody the complex universe of the human mind filled with sensations, thoughts and memories that compose our image of reality.

In 2013, Sceranková surprised the audience with her work at her solo exhibition organized by the Prague City Gallery in the premises of the Old Town Hall. The show presented an unexpected theme, aptly defined by the curator of the exhibition Sandra Baborovská as a private universe5. The cycle confirmed Sceranková’s shift from private mythology to more general, universal subject matters. The miniature model of the space shuttle Discovery showing different phases of its liftoff, or the contrastingly monumental model of the planetary system in the form of a knitting kit6 showed that the author has expanded the scope of her sculpture in terms of iconography, presenting the cosmic space in analogy with the universe of life on Earth. This exhibition initiated Sceranková’s first creative cooperation with astrophysicist Bruno Jungwiert, whose research of cosmic phenomena and galaxy collisions inspired her future work.

The interactive installation the Collision of Galaxies presents a model of the motion of galaxies in cosmic space. The ends of the long metal arms feature slowly rotating parts of household porcelain. When the halves of the cup, plate or vase are set into motion on their orbits, they permanently collide with the viewer, while constantly missing their other halves moving on the adjacent orbits. According to astrophysics, the collision of two galaxies always creates a new galaxy. However, these collisions occur once in a long while, and without any previous physical encounter. The physical characteristics of space phenomena, their behavior and interaction served as a model for the functioning of the terrestrial space, drawing a fragile analogy of human relationships.

The two formally related works serve as two different metaphors of space; one as a system of seeing and perceiving in one’s  mind, the other as a system of relations around us and beyond. On one hand, the author presents monumentalized ephemeral mental processes. On the other hand, we are shown a subtle model of the infinite universe. Both works follow Sceranková’s long-term kinetic program that features found objects such as the sewing machine or the porcelain set. Their motion or rather the sculptural animation (both in the video and installation) remains the key to the meaning of the works. The central proposition of the author and her work becomes the analogy of a human being, its vision, perception, and emotions. According to Sceranková, these are the constants that shape the world.

6    Installation Planetary System (2013) is now included in the collections of the Slovak National Gallery in Bratislava.