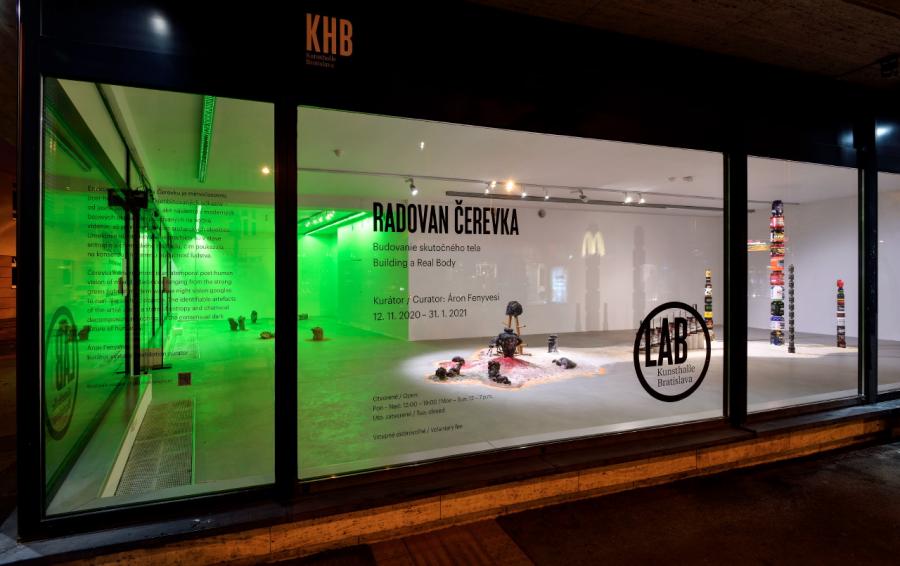 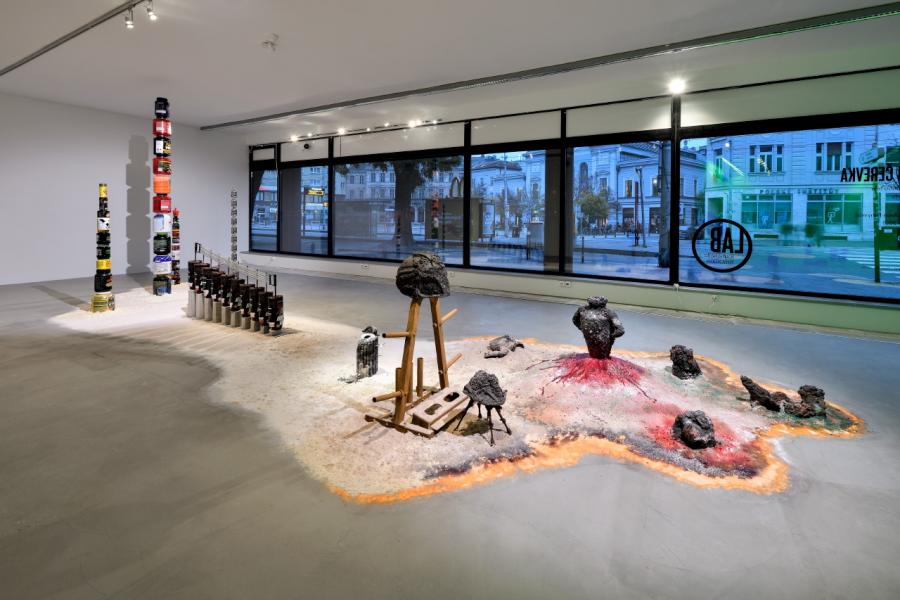 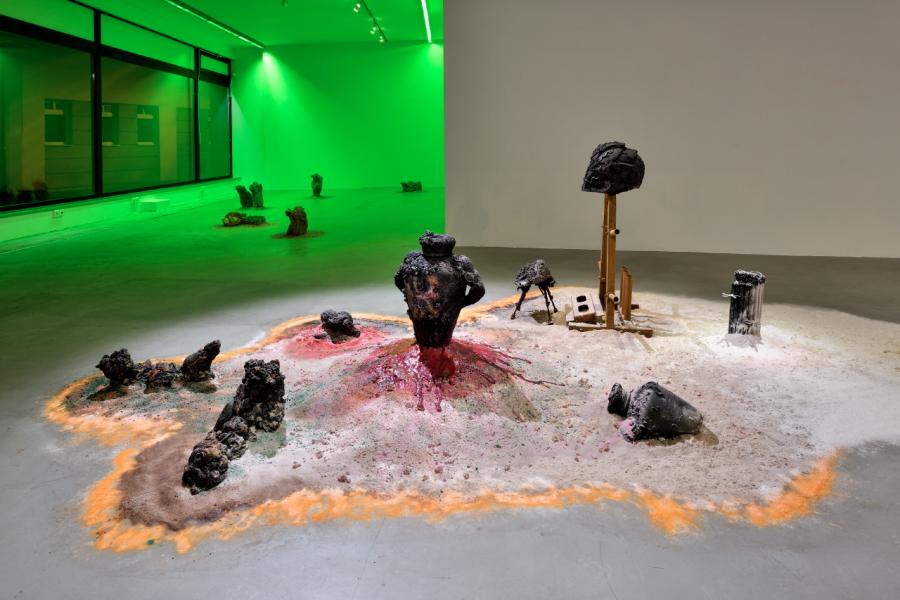 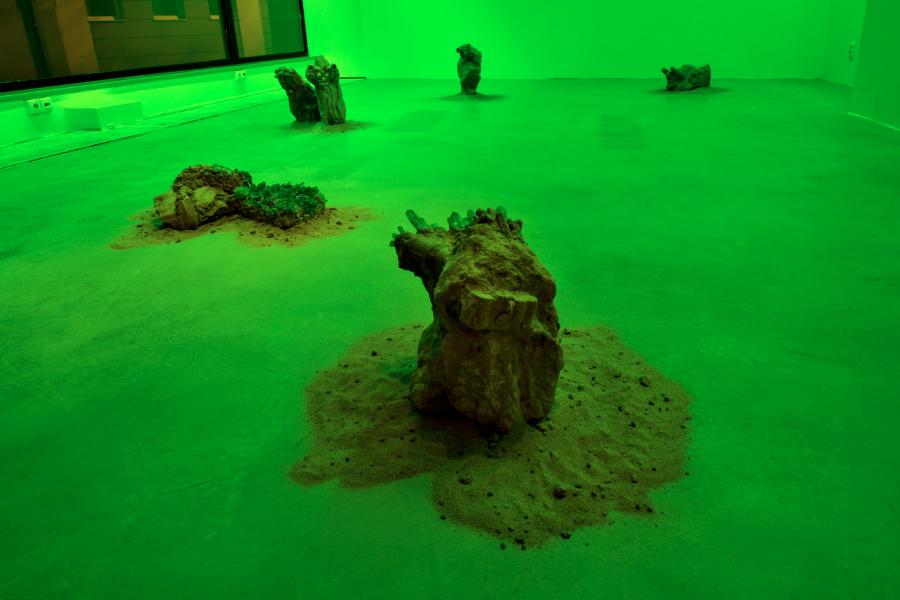 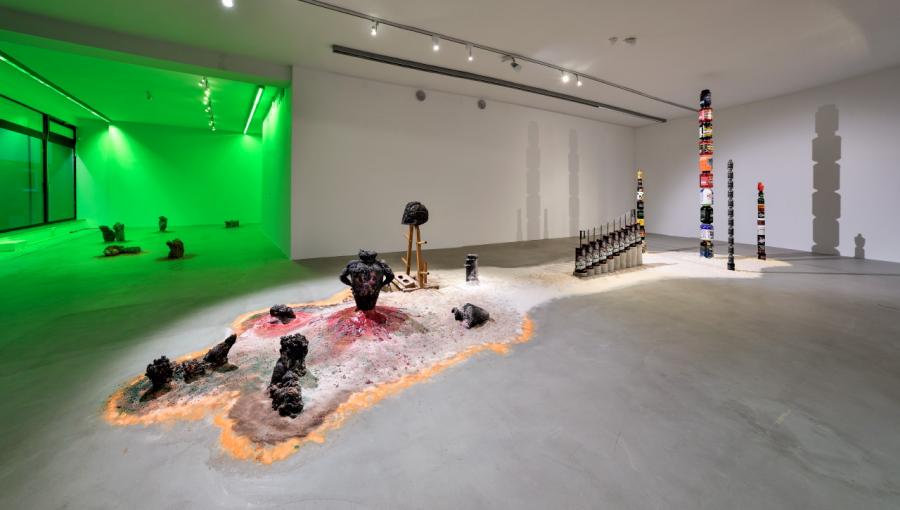 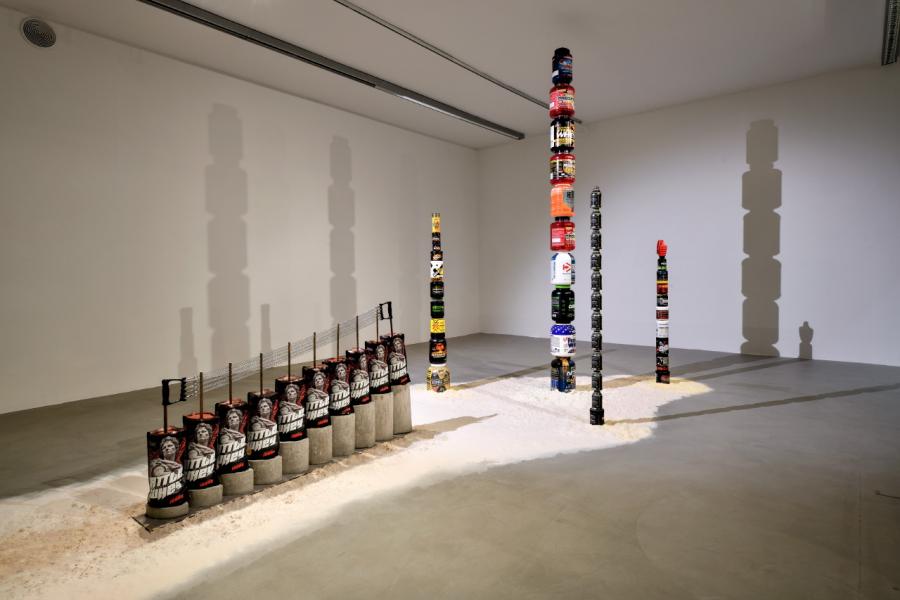 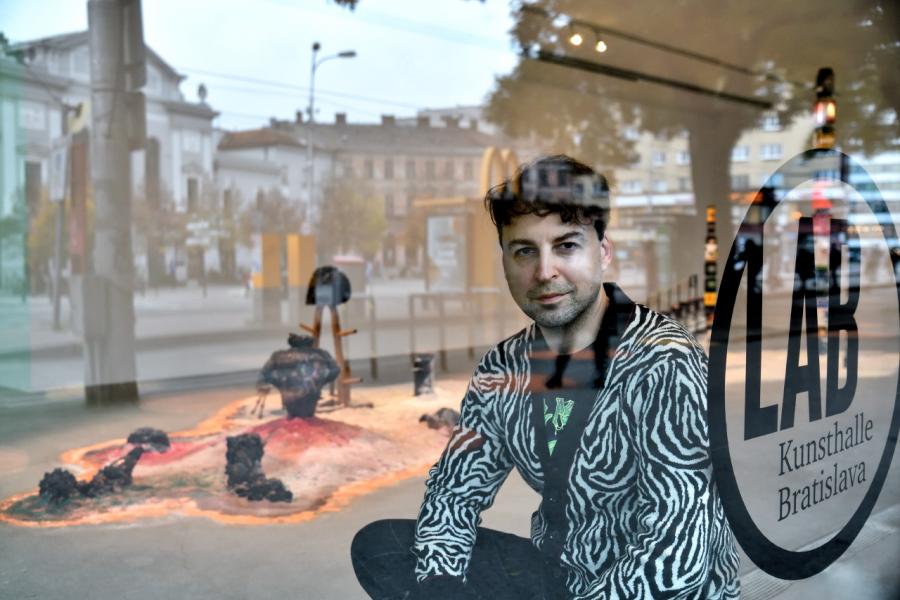 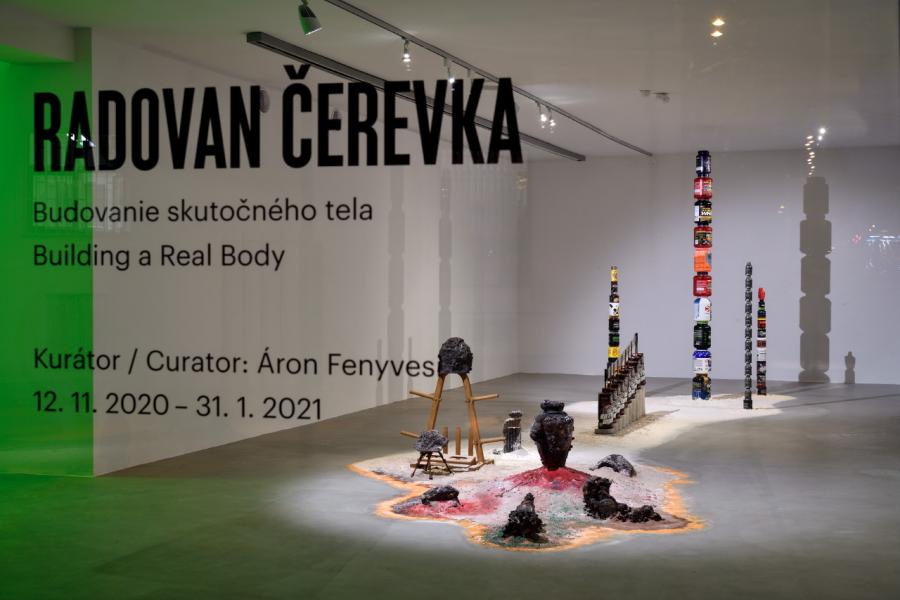 Čerevka is one of the most consistently evolving Slovak artist of his generation and with this exhibition, he expands his work and radically broadens his vocabulary. This is the first time that Čerevka has experimented with the strong multi-sensorial aspect of his artworks, which are presented in a holistic, undividable network. The model-building of one of Čerevka’s signature methods, spectacularly grows on such a large scale that it creates complex environments.

The artist doesn’t only approach new formal aspects of his work, but rather he addresses an almost completely new topic – the bio-chemical cultivation of the human body, and the reinterpretation of our sometimes absurd present as a ruin of the past. The ever-present militarisation of our reality is a topic with which the artist has addressed throughout his career. This time this theme appears as a non-referential fantasy with a touch of science-fiction. We can also witness that the work of Čerevka, which was already changing and departing from more directly critical works, has evolved into an art production based on instinctive research and visceral reality-checks.

As we approach Čerevka’s environment, Chemical Beach, we perceive a scene which depicts a post-apocalyptic, dystopic, or post-human vision, in which only the remnants of human civilization remain. After carefully examining the complexity of the details of the work, we can state that nature is regaining its dominance over the remaining culture artefacts of mankind after the evident disappearance and disembodiment of humans. Crystals and sandstones take over the surface of objects, which were previously supplements of biological life. It is not clear what exactly caused the extinction of the human race. Čerevka’s radical vision excludes the presence of humans, introducing a post-human perspective to our future, which is obviously linked to our present. With his works, the artist also raises the question of the emancipation of objects. This issue became a focal point of contemporary philosophical thought in the writings of Bruno Latour, Jane Bennett and object-oriented ontology, which investigate the possibility that objects can no longer be defined as dependent, inanimate things, especially if we think of military technologies, which automatically identify humans as targets.

Čerevka’s installation features nutrition powder recycled as beach sand. The beach setup strengthens the reflection on the phenomenon of the “cargo cult”. As a side effect, or rather a result of century-long European colonization, some decontextualized functional everyday objects became relics of other cultures, which recontextualized them, giving them a completely different mythical meaning. This is how completely coincidentally appearing everyday household objects became symbols and cultic artefacts of other cultures. The “cargo” lying on the nutrition beach of the artist can’t be perceived and understood from our present perspective and logic, as it contains information from the “future”, which we can’t fully process and decode. This is how the artist is able to build his own brancusian column of infinity out of plastic canisters of nutrition powder. The objects which were designed with the branding tool of applied graphics, become something completely different as an “objet trouvé”, and this gesture of finding, modifying and displaying becomes a terrain of artistic creation. It is also ironic that these synthetic objects will most probably be present for a much longer time on the surface of the planet Earth than their producers and consumers.

Through the atemporal aspect of his art, Čerevka doesn’t only play with the allusion of the future, he also makes references to the other end of the timeline in motion. We can’t fully reconstruct motifs from the ancient past, whatever refined philanthropic manoeuvres we use, as our interpretative culture has changed so much since the time of their occurrence.

The artist arrives at the aesthetic of the ancient by a detour of instinctive research. Čerevka collected and pasted a number of nutrition products, which mostly speed up the bio-chemical process of muscle addition. The branding of these food supplements often refers to motifs of classical antiquity and hand-to-hand combat. It is also an interesting rhetorical phenomenon that, although the complexity of present-day instrumentalized body-building has a completely different base than endurance and the asceticism-based ancient cultivation of the body, it still uses the same visual arguments for marketing purposes. Furthermore, warfare and military strategies have applied widespread objectification and utilisation of the human body since their ancient origins, and do not consider humans as separate entities, but rather as parts of a “big body” of combat cohorts.

Via his exhibition, the artist also reflects on the fact that corporeality has become a contemporary fetish, and that’s why his sculptures appear as cargo cult totems, and ritual artefacts. The magical logic is as present in our present body culture as in archaic rituals. The artist applied the strategy during the exhibition-making of transforming bodies into signs, which for example are represented by a vessel, such as a Greek amphora, which becomes a mannered allusion to the body, incorporating the above conflict between the human body being a subject, or an object of itself.

Čerevka’s environment is an atemporal post-human vision of consciously mixed references ranging from the strong green light of modern warfare night vision googles to ruin-like archaic objects. The identifiable artefacts of the artist are in a state of entropy and chemical decomposure reflecting on the consensual dark future of humanity. The artist creates this vision of a potential new reality with intuitive modification of the existing elements of the present.

The above artistic method of the winner of the 2013 Oskár Čepan Award highlights a constant and a consequent shift of artistic strategies and interests. Čerevka is a founding member of the Kassaboys art group, and has slowly departed from provocative neo-conceptual actions and ironic situationalism, which focussed on phenomena within Slovak society and politics, and moved towards less referential and more intuitive artistic work, which continues to address globally relevant questions. As part of this process, the previous solo exhibition of the artist was an important step at the Košice’s East Slovak Gallery, which addressed the topic of fictional ruins with the help of model-building using hybrid sculptural work. Many previous dynamic interests of the artist hinted at the present environmental experiment at Kunsthalle LAB, perhaps the largest-scale in the artist’s career so far. The present exhibition probably contains elements which will evolve on their own in the artistic practice of Radovan Čerevka, Lecturer at the Faculty of Arts of the Technical University of Košice.

RADOVAN ČEREVKA (*1980, Košice, Slovakia) studied in the Studio of Free Creativity 3D at professor Juraj Bartusz at the Faculty of Arts of the Technical University in Košice, Slovak Republic. Between 2003 and 2004 he studied for two semesters at the Academy of Fine Arts in Prague, Czech Republic. In 2011 he received his ArtD degree at the Department of the Intermedia and Multimedia of the Academy of Fine Arts in Bratislava. Along with Tomáš Makara and Peter Vrábel, Čerevka is one of the founders of the Kassaboys art group. The artistic programme of the artist is focused on political contexts. In the past he was interested in the topic of media manipulation of pictures from war conflicts. At present his creativity transforms from the originally direct postconseptual criticism to the strategy of creating fictional visions of the future. He is active in a wide spectrum of media – sculpture, drawing, installation, action and the environment. His art works have been part of many group exibitions (Stop Violence Against Women, Amnesty International, Bratislava; Man, Hero, Spirit, Machine, Galéria Médium, Bratislava; Net, Billboart Gallery, Bratislava, Košice; East of Eden, Karlin studios, Prague; Prague Biennale 4, Karlin Halls, Praha; Descreet media, Cyprián Majerník Gallery, Bratislava; Zero Years, House of Arts – Dom umenia, Bratislava; Midlle East Europe, DOX – Centre for Contemporary Art, Prague; Take take take and?, Benin Biennale, Benin; Blood, Slovak National Gallery, Bratislava; Private Nationalism, Ostralle – Centre of Contemporary Art, Dresden; Fear of the Unknown, Kunsthalle Bratislava, Bratislava). He presented his art works at his solo exhibitions like Beasty Models in the Trafó Gallery (2016) and Power in the Museum (2018 – 2019) in the East Slovak Gallery in Košice. He was a finalist of the Oskár Čepan Award in 2005 and in 2013 he received the Award. At the moment, he is the head of the Studio of Free Creativity 3D. He lives and works in Košice.

ÁRON FENYVESI (*1983, Novi Sad, Sebia) is a Budapest based curator and art writer, studied art history and aesthetics in Eötvös Loránd University. Since 2018, he is chief curator of acb Gallery, Budapest. Earlier on he was curator of Trafó Gallery, Budapest, from 2011 to 2018. Fenyvesi curated various exhibtions in Hungary and abroad focusing on the local, regional and international emerging art scene – his recent shows were held at Kunstfrom Graz, Trafó Gallery, Budapest; Galeria Plan B, Berlin; Kunstforum Ostdeutsche Gallery, Regensburg; Museum of Contemporary Art (MSU), Zagreb, Šopa Gallery, Košice, MAGMA, Sfântu Gheorghe and Club Electroputere, Craiova. In 2009, he was nominated for the Lorenzo Bonaldi EnterPrize hosted by GAMeC, Bergamo. His essays were published in ArtReview and in Roundtable, e-journal of the Gwangju Biennale 2012. In 2013-14 he was jury member of the Oskar Cepan Award.