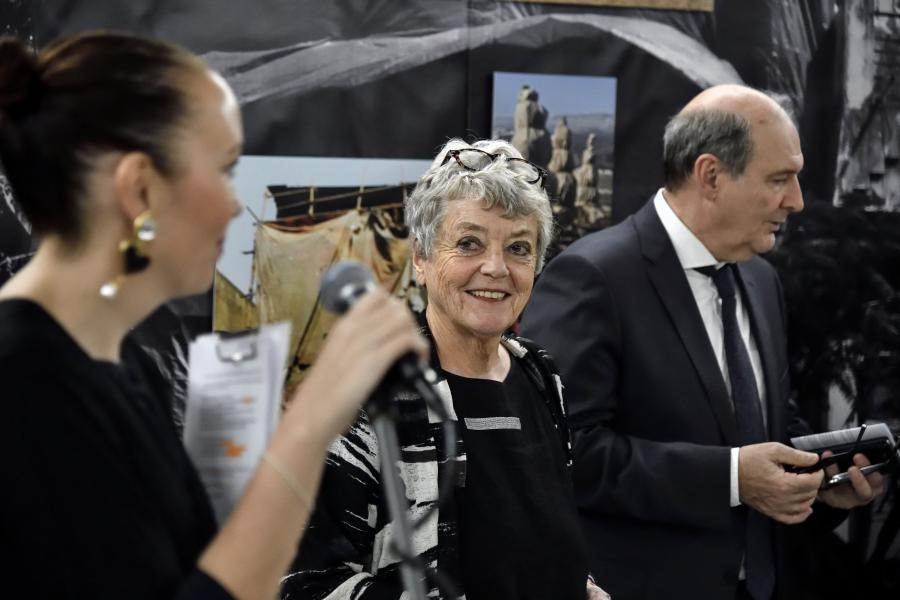 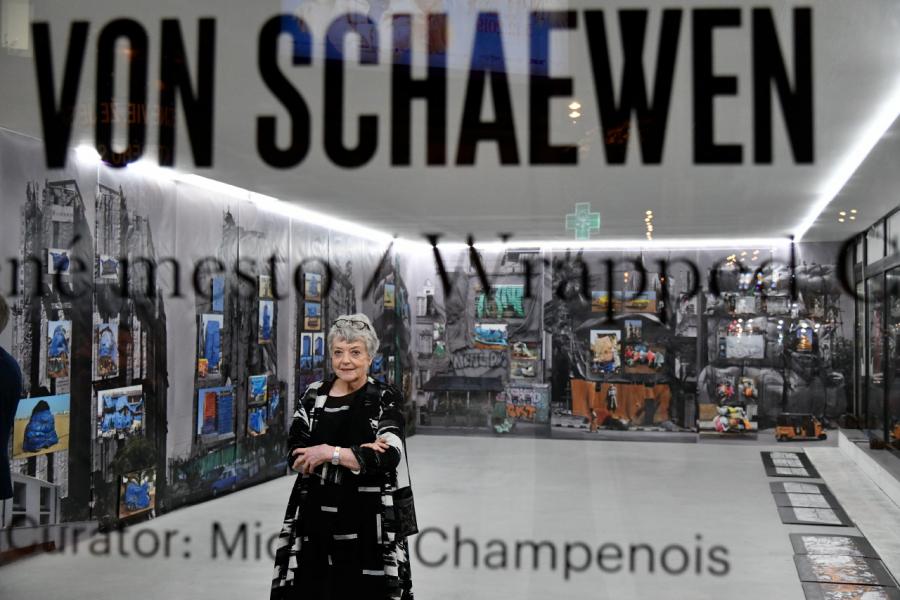 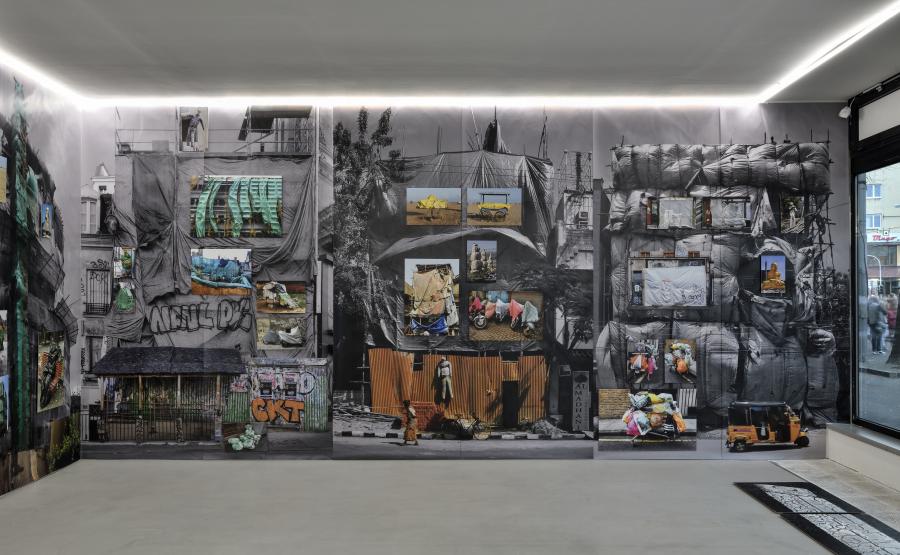 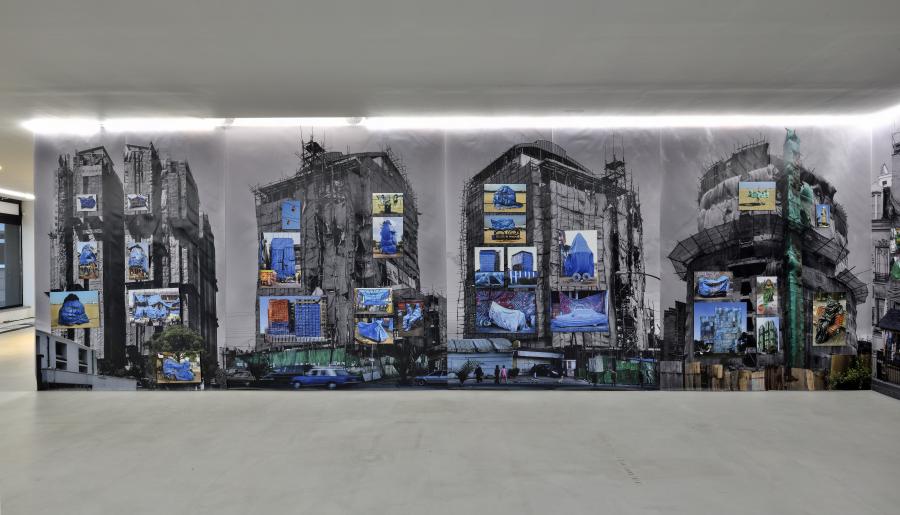 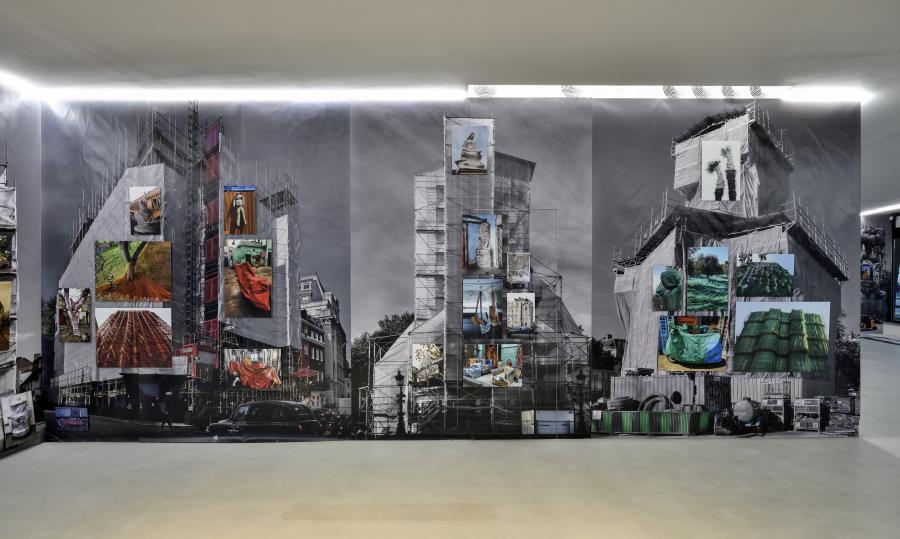 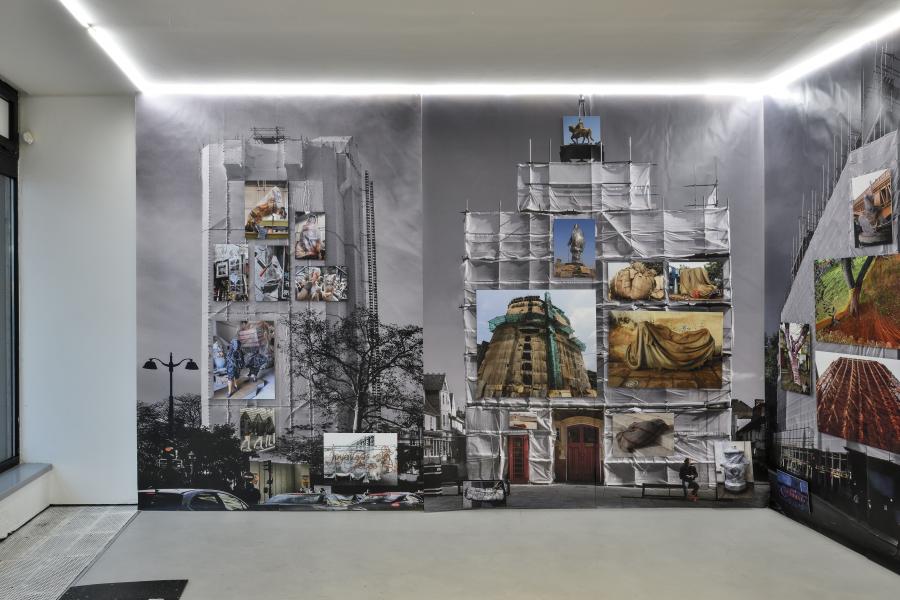 Crossing the city, her eyes on the alert, Deidi von Schaewen collects fragments: destroyed walls, erased paintings, hidden monuments… The artist identifies and records the powerful scaffoldings and huge tarpaulins that form ephemeral sculptures with an augmented and intriguing presence.

Photographing ruins in a way that recalls the 18th century tradition of painting ruins, she has forged the body of work of a visual artist: photography can also be a tool to highlight the bizzare, to reveal the strangeness of reality… All that makes you dream, or that could disturb you in the ordinary scenery of urban life.

As a student at the School of Fine Arts in Berlin, where she was born in 1941, she studied painting, but discovered…photography. On one of her first rolls of film she shot, she recorded a wall with a painted advertisement. Some time later, she realized that this old wall was hidden by a scaffolding. From this came her passion to save the walls… She undertook to photograph them and thus began a series, without knowing what she would discover nor how long it would go on.

Perhaps she was remembering walking as a child, with her mother through the streets of the devastated German capital which revealed what no one should have seen: the intimacy of peoples’ homes laid bare by war and destruction.

At the age of 24, she left Berlin and moved to Barcelona. In the 1960s, it was a lively and cosmopolitan city. There she met the artistic fauna of Cadaques, with Salvador Dali, Duchamp and Man Ray. Along with the architect Peter Harnden she was involved in the preparation of Expo 67 in Montreal. One day, in 1965, she was struck by the vision of a department store, the Corte Anglès in the Plaza de Catalunya. It had…. disappeared: completely wrapped up, monumentalized. This aesthetic shock marks the beginning of the second series of photographs: after the walls, the scaffoldings.

Like ready-mades, the silhouettes of these buildings draped in a canvas, or clad in a metal armour, attract her artistic eye. Those which the poet André Breton calls “monuments of the unrevealed”, buildings that are temporarily hidden from our sight. So they rise beneath their disturbing disguises of shimmering meshes, colorful and luminous.

In the preface of the book Echafaudages (Editions Hazan, 1992), which shows this long-term body of work, Dominique Baqué, art historian and specialist in art photography, recalls the role of chance for the Surrealists. She underlines their choice of poor materials, of the informal in contrast to “beautiful” (belle forme) architecture. She recalls how André Breton “called on the artists not to get locked up in their creative habits, but to face the wind of the street”. He himself, believing in the “objective hazard”, willingly lost himself in the Parisian maze of streets. “What is at stake”, writes Dominique Baqué, “in the urban wandering and the found objects, is the awareness that the world is a network of signs, figures, signals generating implausible complicities”.

We could also think of other artists working in series, such as Bernd and Hilla Becher with their photos of the industrial era factories. But, according to Dominique Baqué, they give themselves “the austere task of producing accurate, faithful documents (…), an archiving that excludes any research of an aesthetic nature”.

“Nothing of the sort in the work of Deidi von Schaewen”, says the historian. “To the neutrality of the photographs, she opposes the experience of shock, investing the subject with what Alois Riegl would call, the will of art. Her images do not exclude a certain lyricism, a sense of the baroque, of humour, derision, nor, finally, a dramatic aestheticization”.

If we return to Deidi von Schaewen’s biographical journey, we note complementary tastes and practices: modern architecture and graphic design, film, reporting from the four corners of the world, her attraction for painted houses in Africa, India or Asia, the discovery of the wonderful world of the “outsider artists” who create around their homes a poetic universe made of found objects, etc…

From the very beginning of her stay in Barcelona, she was interested in architecture, particularly in Ricardo Bofill’s surprising early buildings. Next step: four years in New York where, while working with the brilliant graphic designer Herb Lubalin, she continued to enrich the systematic series she had started in Europe.

In New York, her collection of tarpaulins inspired her to decorate a construction site barricade for the Georg Jensen boutique on Madison Avenue in 1970, in collaboration with Herb Lubalin. She created an installation of large letters under a plastic covering… She also created a theater set using scaffoldings and projections on tarpaulins for Antonin Artaud’s “Black Sun”, directed by Robert Cordier at the La MaMa in New York in 1971.

In 1974, she arrives in France, for the presentation of the feature film by Robert Cordier Injun Fender, at the Festival of Toulon. She was the cinematographer for this film. She chose Paris, which became the base for her many travels around the world. She then established herself as an architectural photographer. From Ricardo Bofill, whose first buildings she had photographed in Spain, to Jean Nouvel and Andrée Putman, whose entire career as a designer she will document, she is a witness to these prosperous years and in particular to the major projects of President François Mitterand’s first seven-year term.

As an artist, her photographs of walls were first exhibited at the Musée National d’Art Moderne in 1974 by the curator Jean-Hubert Martin. For the publication of her book “Walls” in 1977, the Centre Pompidou presented an exhibition of her large B/W prints with a map of Paris showing all the walls she had photographed in the capital. At the same time, in a small street near Beaubourg, she discovers another world at ground level… and this is the beginning of the series “Trottoirs du Monde” (“Sidewalks of the World”).

Familiar with the work of the Surrealists (she directed a 52 min film on Man Ray in 1984), Deidi von Schaewen is a visual chronicler of the urban universe, with a penchant for the ephemeral, for collage, for the unexpected. The covered monuments can be identified by a silhouette, a detail; ordinary buildings become sumptuous theaters of colour, moiré effects and reflections. Reality is not one, but multiple.

The “Sidewalks” reflect an image of “life from above”: with their crushed cans, they remind us of César’s compressions; the wrapped buildings remind us of Christo’s work, but without his intervention…This art brut, the true object of her quest, can appear on any street corner: from Bombay to Cairo, from South Africa to China, to India, which she has often explored.

Travelling around the world for books published by Taschen such as “Fantasy Worlds” (1999), or “Interiors of India” (2000), then preparing two volumes of “Inside Africa” in 2003, she continues to collect… New wrapped objects have appeared: series of wrapped cars, mainly in Egypt, motorcycles in India and elsewhere, bicycles, children’s games and fishing nets wrapped in plastic during the monsoon season on the beach of Madras, trees in Japan and India, statues from Berlin to Bombay and Colombia, and the “barrages” in the gutters of Paris.

The series of colored sheet metal huts on the edge of the desert in Mauritania are not captured by an ethnologist’s eye, let alone that of an ironic voyeur. Found objects, but not stolen objects…In this great painting of a rustic humanity, this art of doing everything with nothing adds a sensitive if not tragic dimension. It is a tribute to the ingenuity of populations subjected to severe hardship.

With her alert eye, the quick reflexes, ready to surprise what moves in the universe of the inanimate, she collects the neglected signs of an urban scenography, its precarious lifestyles, the impromptu sequences that form a coherent set of captivating images.

Her other passion, that of vernacular houses painted by the inhabitants, initiated in India and pursued in Africa, will be the theme of a future book. It led her to create the association “Women of Hazaribagh” to help groups of villagers in the Jharkhand region in northeast India to try to perpetuate a threatened tradition of painted houses. This photographic inventory aims at social action and preservation of heritage.

Deidi von Schaewen (*1941) studied painting and graphic design at the Hochschule für Bildende Künste Berlin. She works as a photographer and filmmaker. In her personal work, she explores and captures the ephemeral. The work bears witness to our urban civilizations fated to disappear, and to the involuntary theatricality of everyday objects. Her photographs and videos have been exhibited since 1974 in museums and galleries in several countries (Musée National d’Art Moderne, Paris, 1974; Marian Goodman, New York, 1975; Centre Georges Pompidou, Paris, 1977; Fondation Miro, Barcelona, 1982; Printemps de la Photo, Cahors, 1994; Biennale d’Art Contemporain, Lyon, 2001; Chaumont sur Loire, 2009; Golden Pass train, 2010; Evergreen University, Olympia, 2014; Rubin Museum, New York, 2016, 2017 etc.). She has made a number of films and videos, i.e. Man Ray in 1984 (a co-production with the Centre George Pompidou in Paris), and several videos for the Vitra Design Museum. She has published many books of Travel, Architecture, Interior Design and Gardens (Walls, 1977; Scaffoldings, 1992; Interiors of India, 1999; Gardens of France, 2001; Inside Africa, 2003; Fantasy Worlds, 2007 etc.). Her photographs were published in many magazines, i.e. The World of Interiors, Elle Decoration, Vogue, AD etc. She lives in Paris and travels the world.

Michèle Champenois (*1947) is a french journalist and an architecture and design critic. She was working for Le Monde from 1968 to 2008. In 1980, six journalists of Le Monde, were given the first Grand Prix de l’architecture, for their contribution to better understanding of the state of architecture and the need to enlarge the public knowledge. From 1983 to 1995, Michèle Champenois, along with the editor-in-chief Jean-Pierre Quélin, were responsible for the new weekly supplements Le Monde-Aujourd’hui and Le Monde sans Visa. They introduced photography as illustration in the pages devoted to arts, travel, design, architecture, philosophy and literature. She produced numerous pieces about international architects such as Norman Foster, Richard Rogers, Renzo Piano, Tadao Ando and Dominique Perrault. From 2004 to 2009, she was part of Le Monde 2 as deputy-editor-in-chief for the cultural section. She also contributed to magazine Architecture d’Aujourd’hui, notably with a piece about Chandigarh, in 1987 (in collaboration with Deidi von Schaewen). In 2007, Michèle Champenois received the Medal of architecture critics by the Academie d’architeccture. From 2009 to 2018 she was a member of the board at Ecole nationale supérieure d’architecture in Paris. She is now responsible for a radio broad cast about architecture on Frequence Protestante. She has published books of designers like Andrée Putman (Skira-Flammarion, 2010), Marc Held (Norma, 2014), Olivier Gagnère (Norma, 2015), GLP-DPA (Norma, 2016) and Marc Held-Skopelos (Norma, 2019).