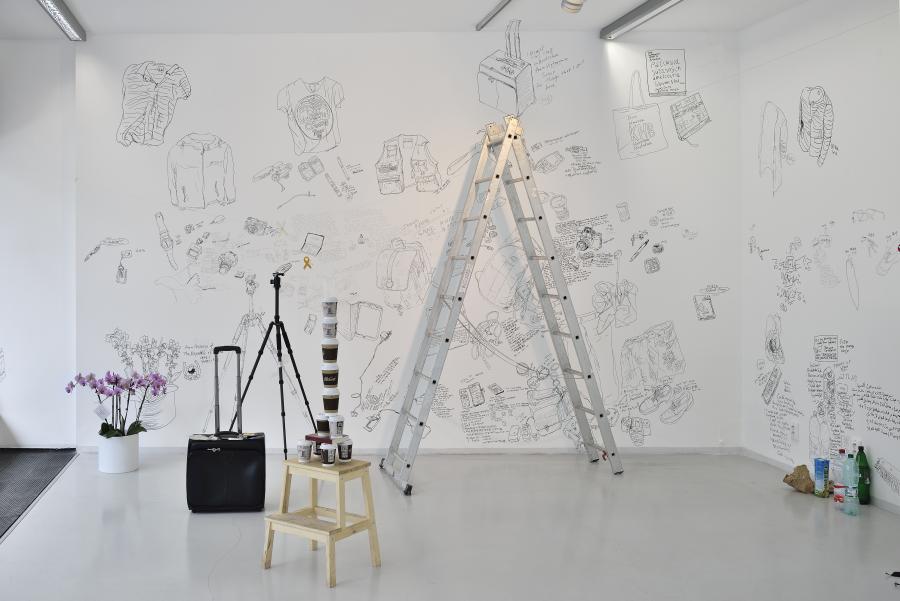 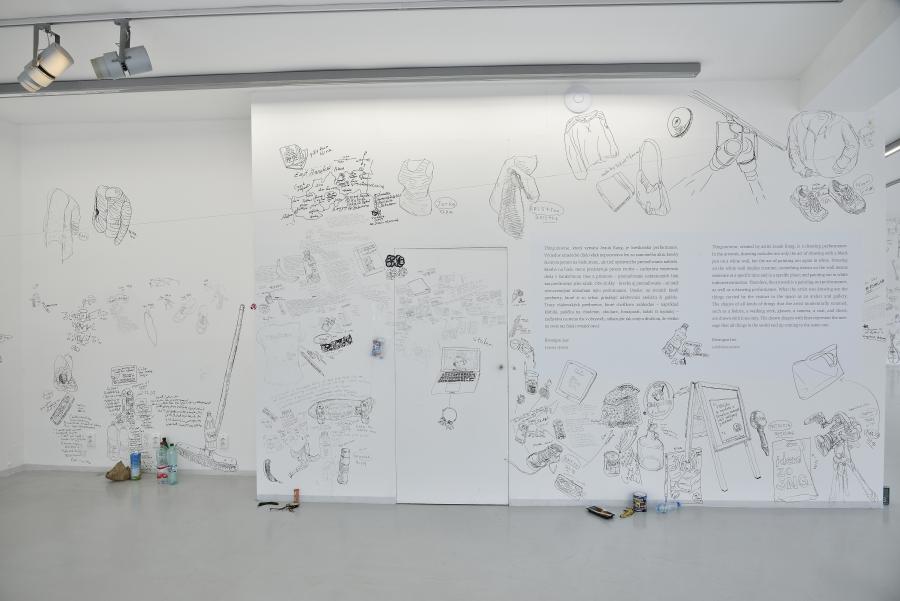 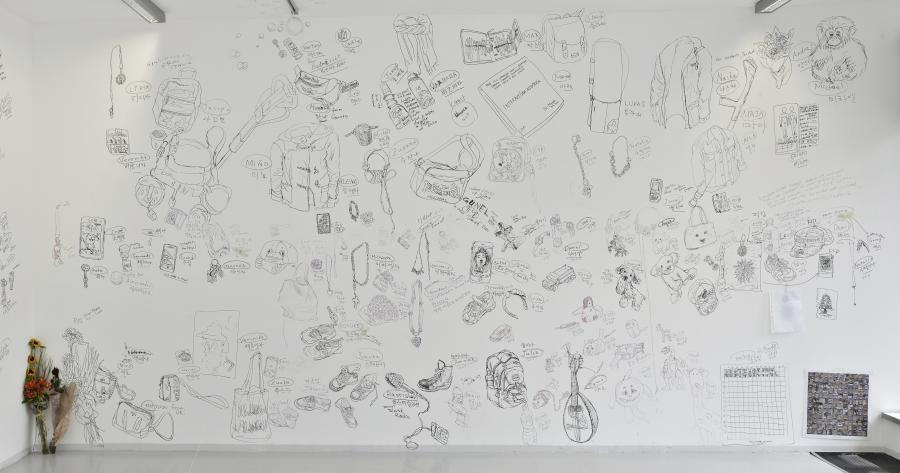 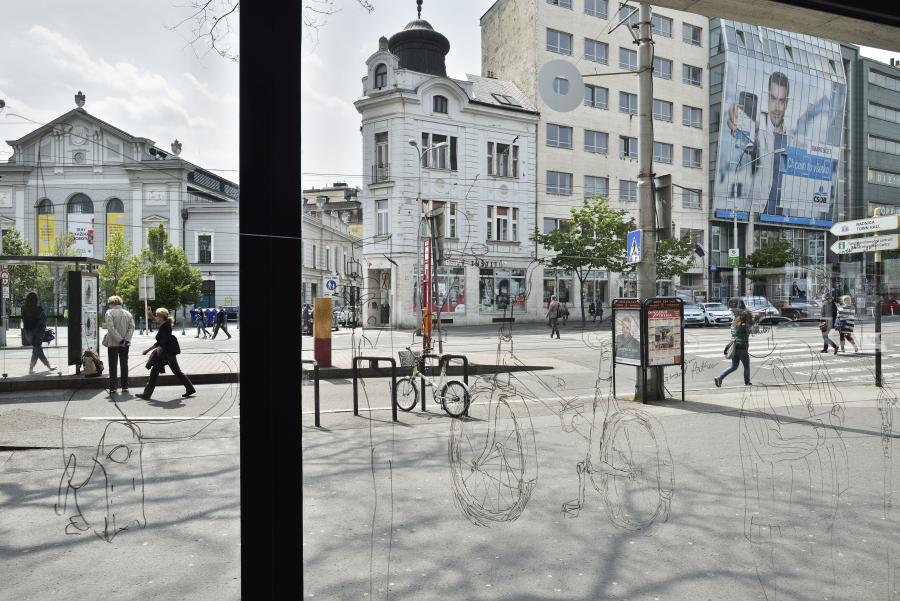 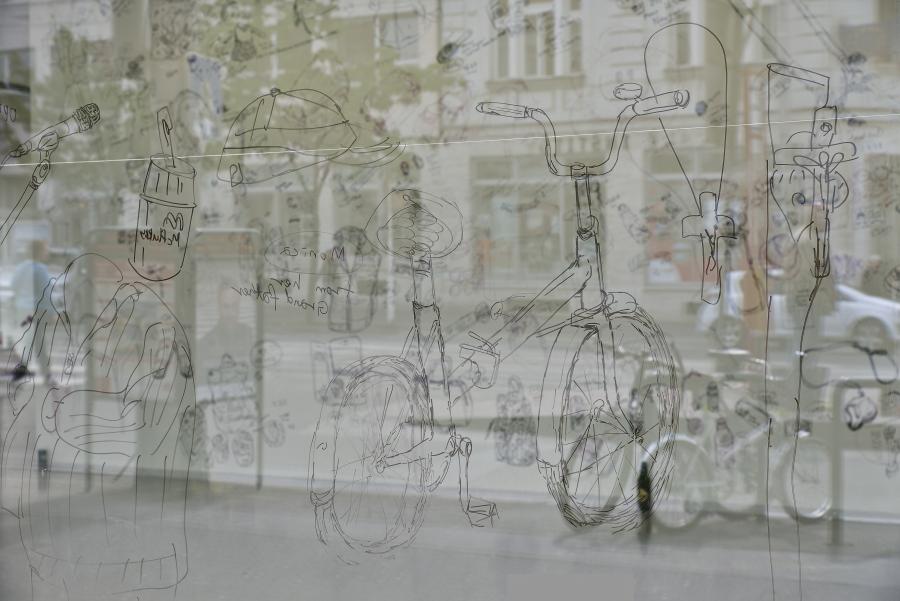 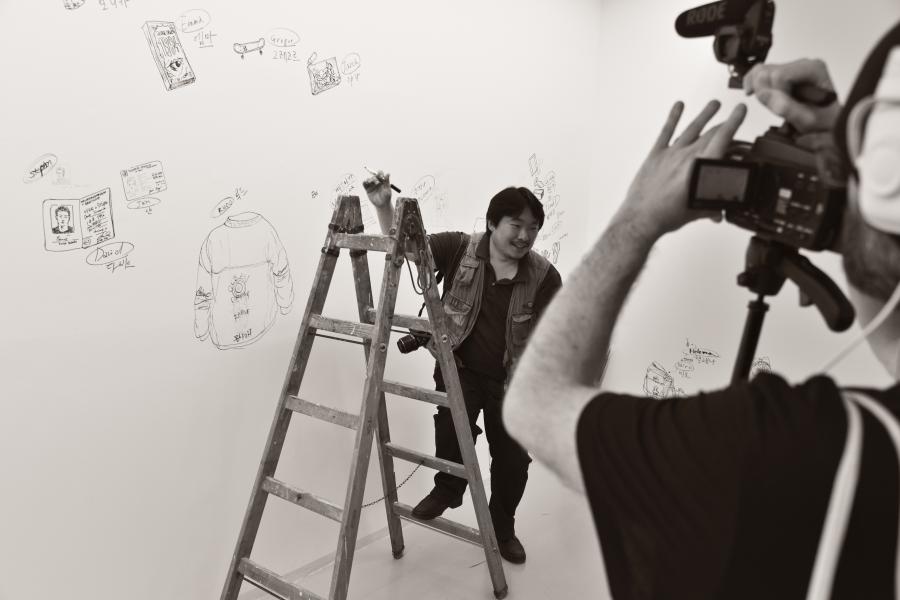 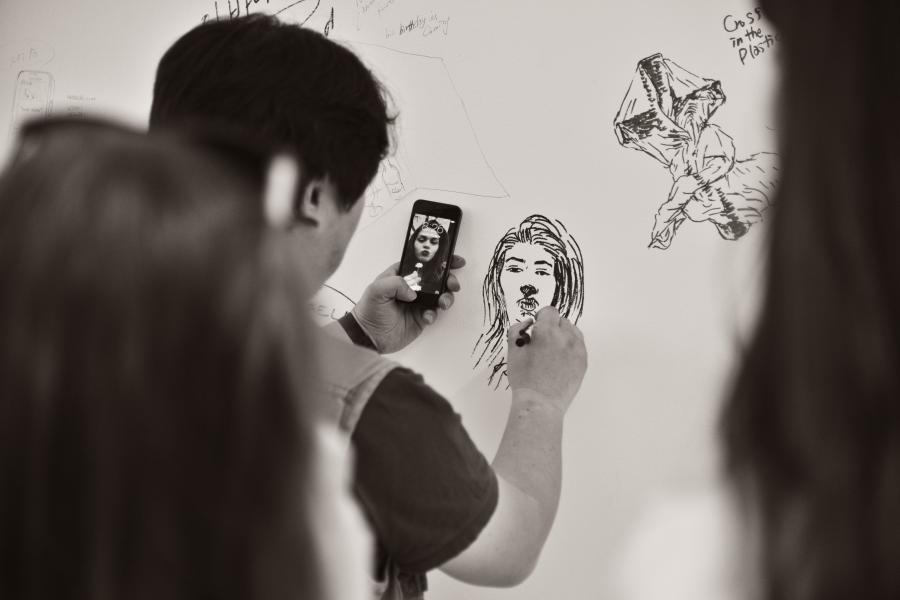 Thinguniverse, created by artist Jeauk Kang, is a drawing performance. In the artwork, drawing includes not only the act of drawing with a black pen on a white wall, but the act of painting out again in white. Drawing on the white wall implies creation; something drawn on the wall means existence at a specific time and in a specific place; and painting out in white indicates extinction. Therefore, the artwork is a painting-out performance, as well as a drawing performance. What the artist was drawing are the things carried by the visitors to the space as an atelier and gallery. The shapes of all kinds of things that the artist momentarily scanned, such as a fedora, a walking stick, glasses, a camera, a coat, and shoes, are drawn with lines only. The drawn shapes with lines represent the message that all things in the world end up coming to the same one.

Kang sees all beings in the universe as what is not eternal. In other words, they go through creation and extinction. Even though his drawn objets look diverse and their circumstances and identities look different and independent, they are not actually so in the universal dimension. They are all connected with each other. Even someone’s smart phone has life and death. The smartphone experiences a series of processes of being created, getting it used by someone, and ending up disappearing. Such processes are the ways of the world and the principles of the universe. The materials of the smartphone come from various countries, such as Korea, China, and America, and from some other places we are not aware of. Plastic material is from the fossil fuel out of the bones and flesh of a dinosaur which had survived long time. The smartphone serves as a medium to connect the small ‘I’ being at this moment and in this place with the whole world, the whole universe and all times. In fact, the smartphone does not connect all things in the world, and prevents us from realizing a principle of the universe that all things are already connected with each other. That is the idea that the artist expresses.

The things drawn on the white wall exist as they are created. They have some relationships with others drawn up and down and aside. All things build relationships in the processes of being created, of coming across one another and of being used. The actual objets appearing in Thinguniverse, not chosen by the artist’s idea, are drawn simply as much as they are scanned by the artist. In the artwork, Kang represents the existence of the things, instead of establishing their relationships intentionally, for representing them as they are means building relationships between them. Not a single thing goes beyond the processes. Each one of things exists in the continuity of line, surface, and time, rather than in the discontinuity of dot and moment. Such a principle is applied to all things, both living and non-living.

His artwork reminds me of the Buddhist principle of causality, called Indra’s net. Although Kang didn’t create the drawing performance on the basis of Indra’s net, the artist who had grown up in the Korean traditional culture seems to be influenced unconsciously by Buddhism. That is the result from the principle of causality, which is similar to the principle of the universe in the morning dew trapped on a spider net, caught by someone’s eyes: a drop of dew on the net is reflected by another drop, which is reflected by another one. All things are in the principle, and so is the universe. Nothing is independent and eternal. Everything has emptiness. Where there is a beginning, there is an end. Life is death, and death is life. This is, because that is. This is not, because that is not. This ceases to be, because that ceases to be.

Kang‘s Thinguniverse never comes to an end even if the work is done. That is, his one work being performed constantly by the change of time and space leads into another work. There is no same thing, and there is no different thing. His work neither remains nor disappears. All things that exist on the same day and time disappear. In the order of the universe, nothing remains the same or different for good. With the change of time and space, generated is a processes in which small things create a big one in order to go toward another extinction. The artist uses the ceiling, the floor, and the wall as his work space, for he sees the space itself as the universe based on causality. Things existing over the floor are represented on the wall by the artist. And the existence and the representation are connected with each other by a thread which plays a role to establish relationships with all in time and space. The thread installed in Kunsthalle, Slovakia, serves the function of building a relationship with Suwon, Korea, which leads the artist to his homecoming exhibition to be held somewhere in Korea. The thread turns into a large matrix of the universe in which artist Kang, Jeauk becomes a philosopher and artist showing that creation comes together with extinction.