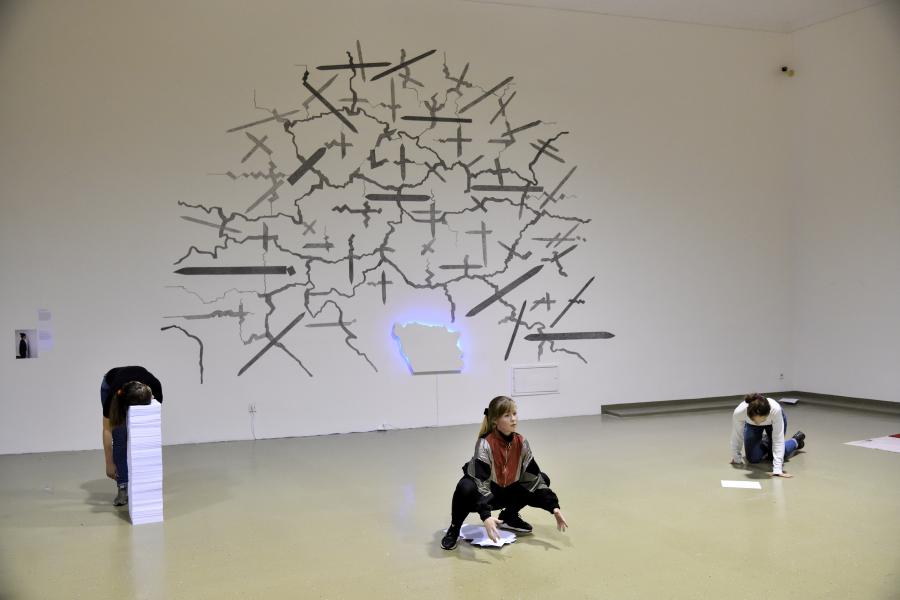 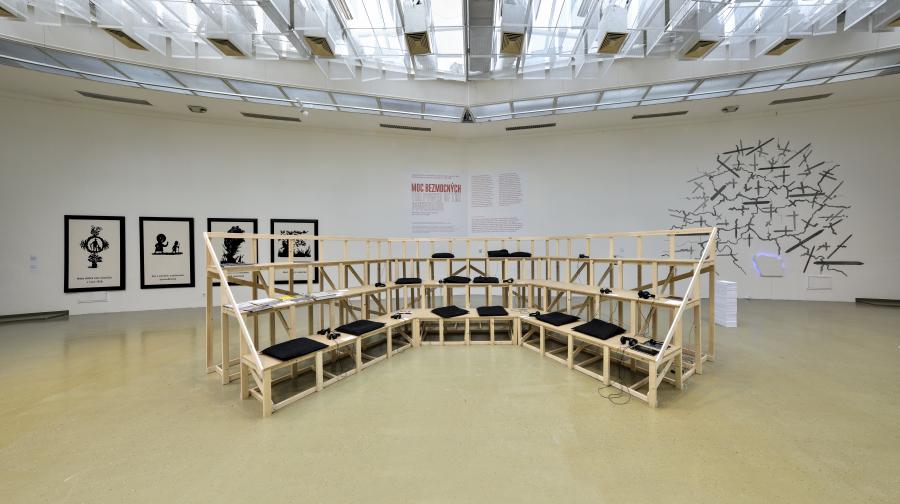 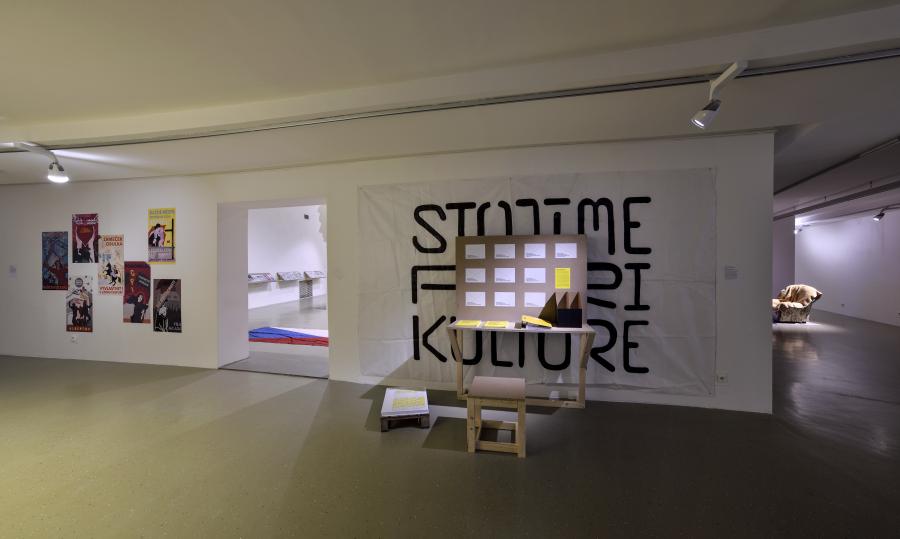 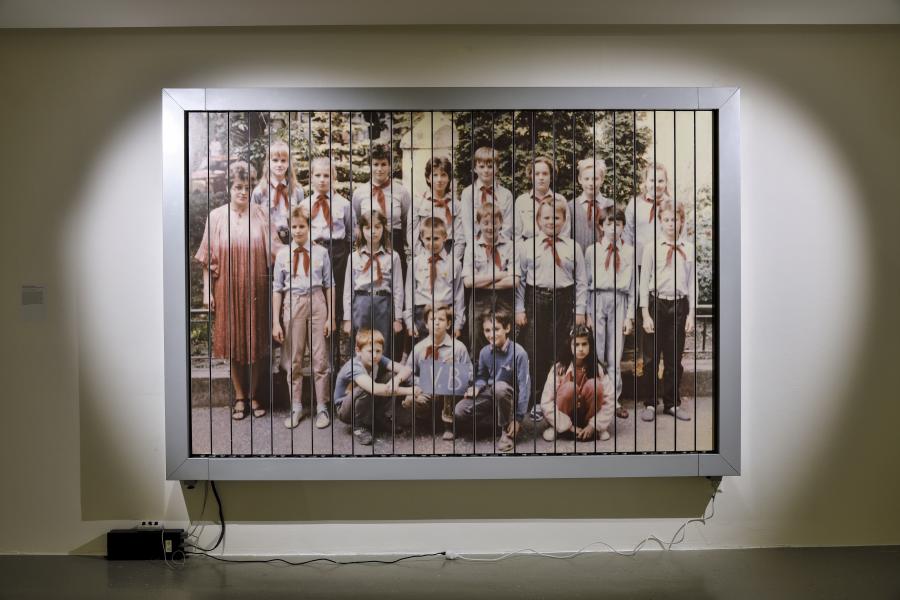 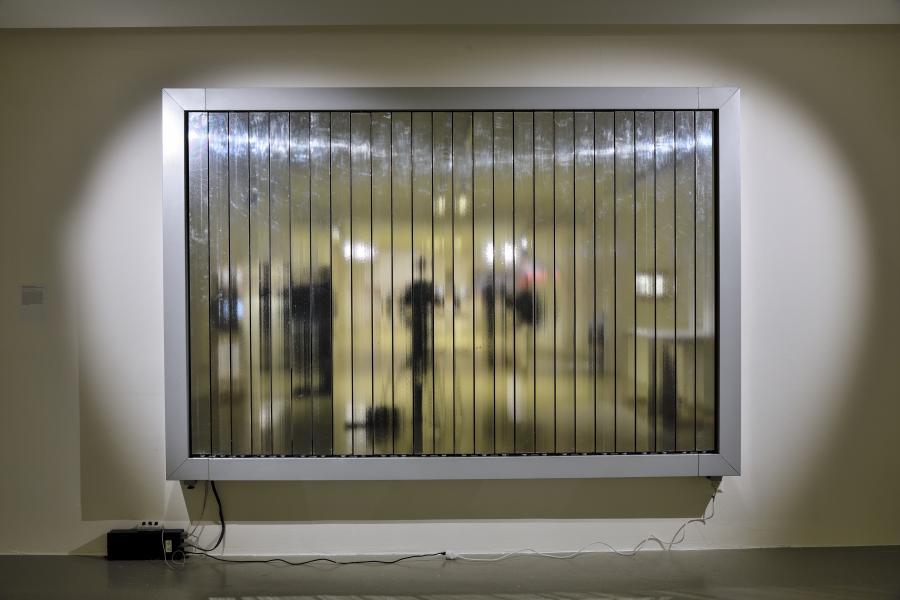 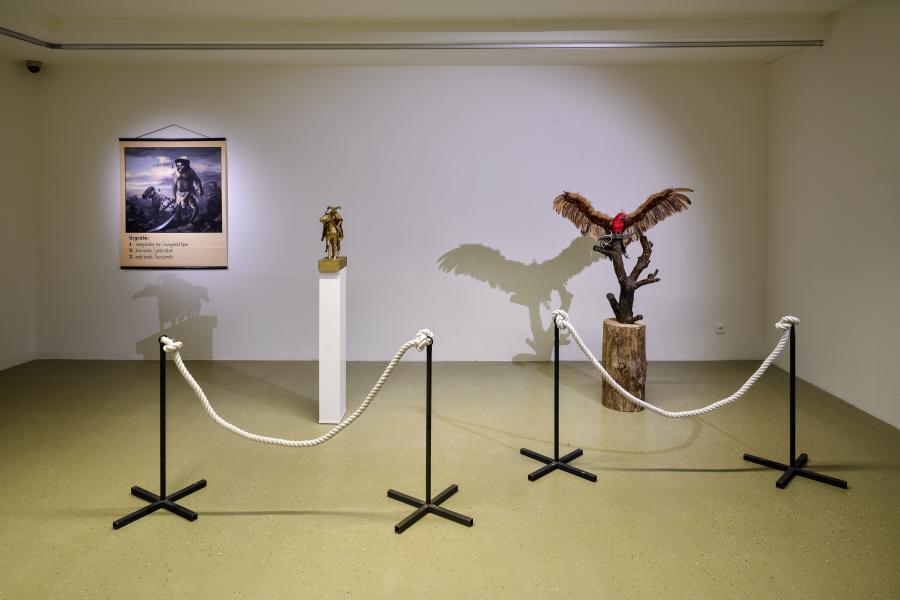 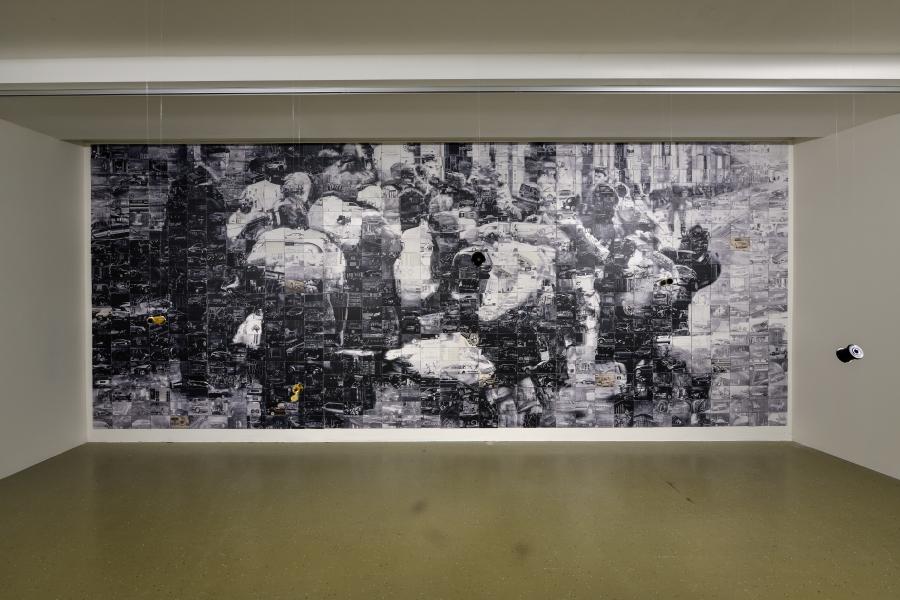 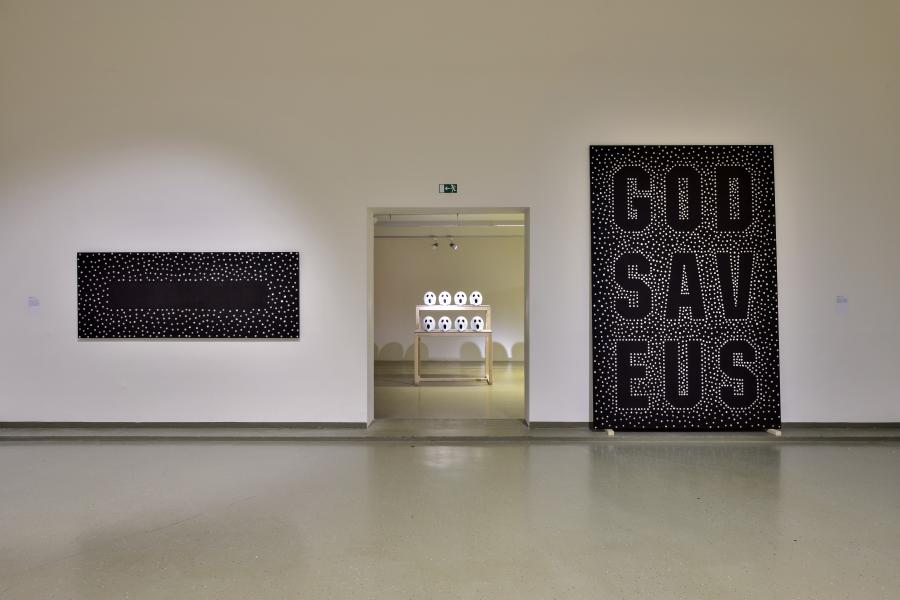 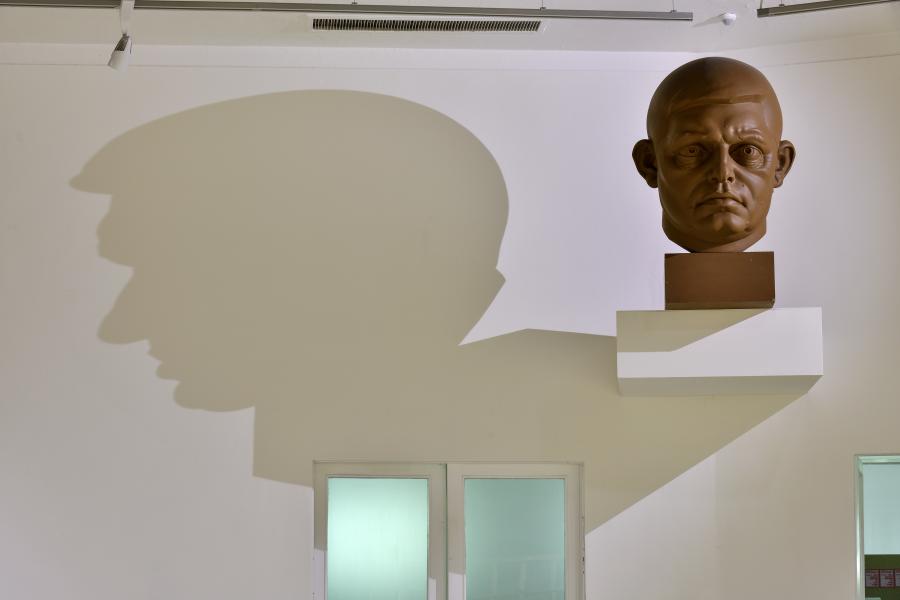 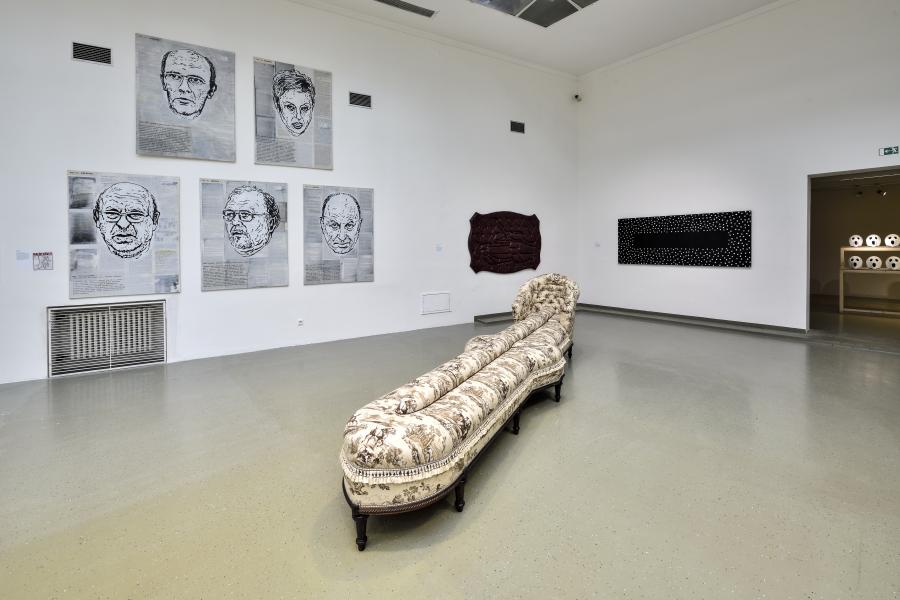 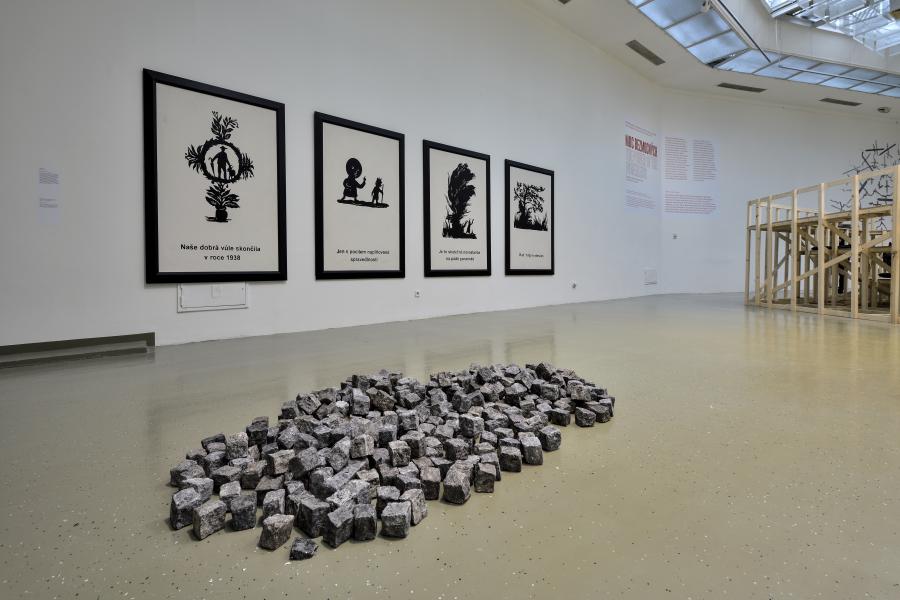 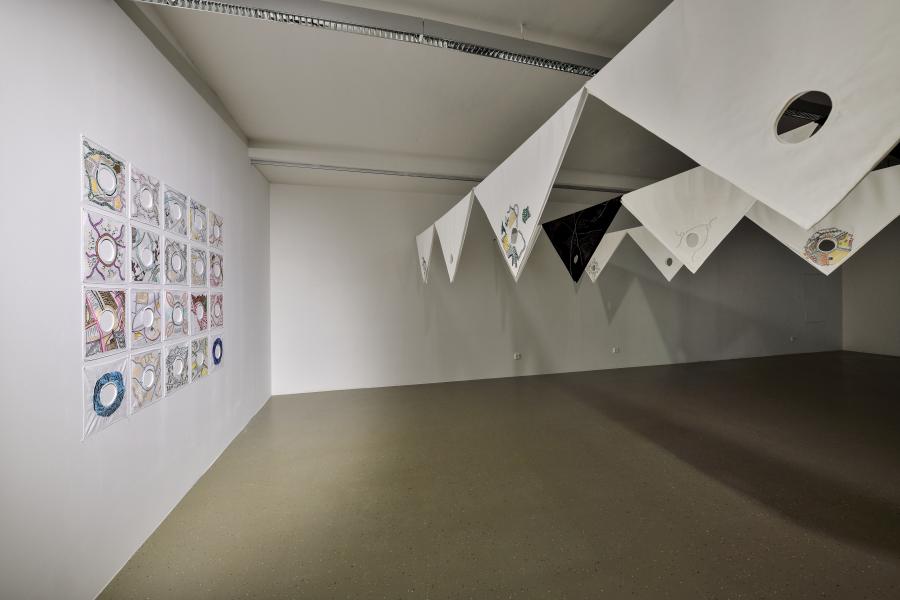 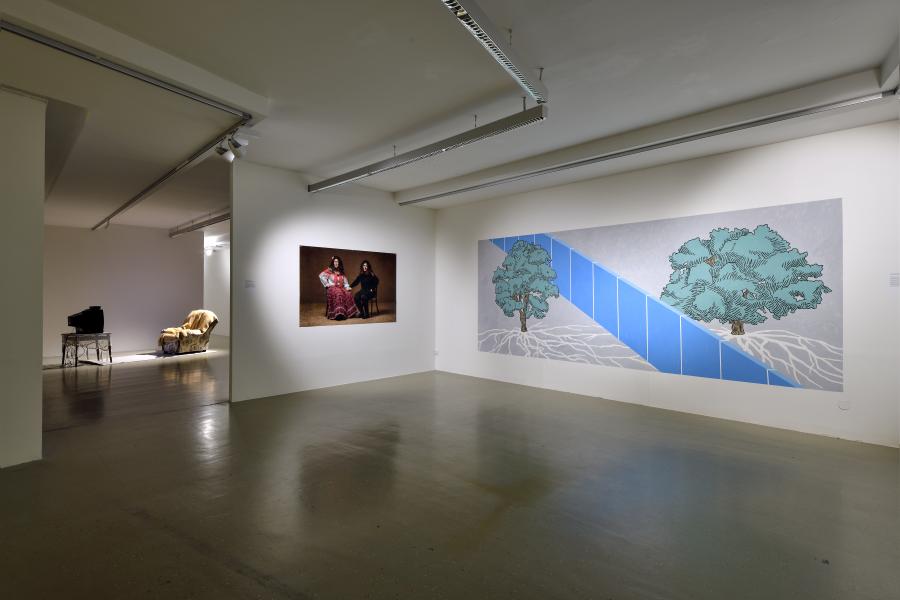 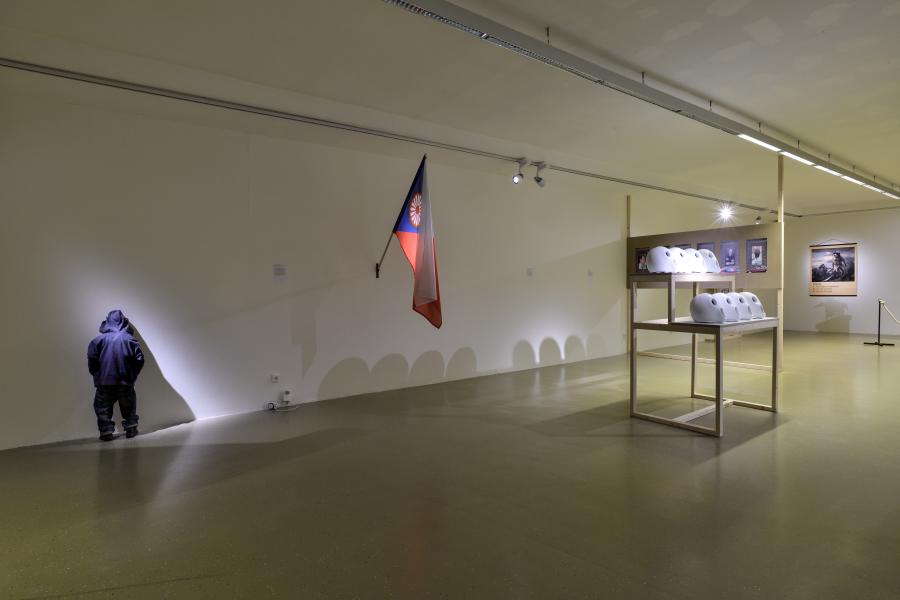 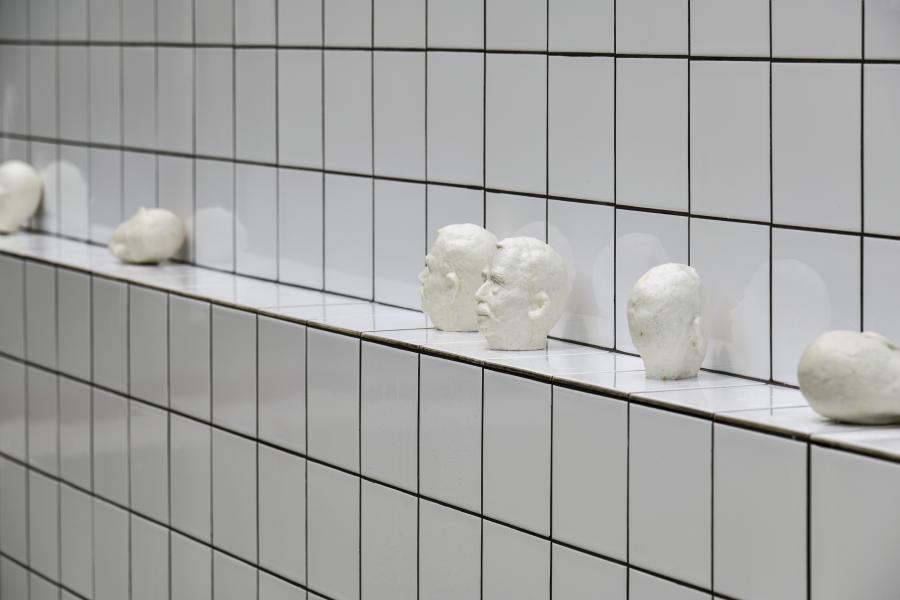 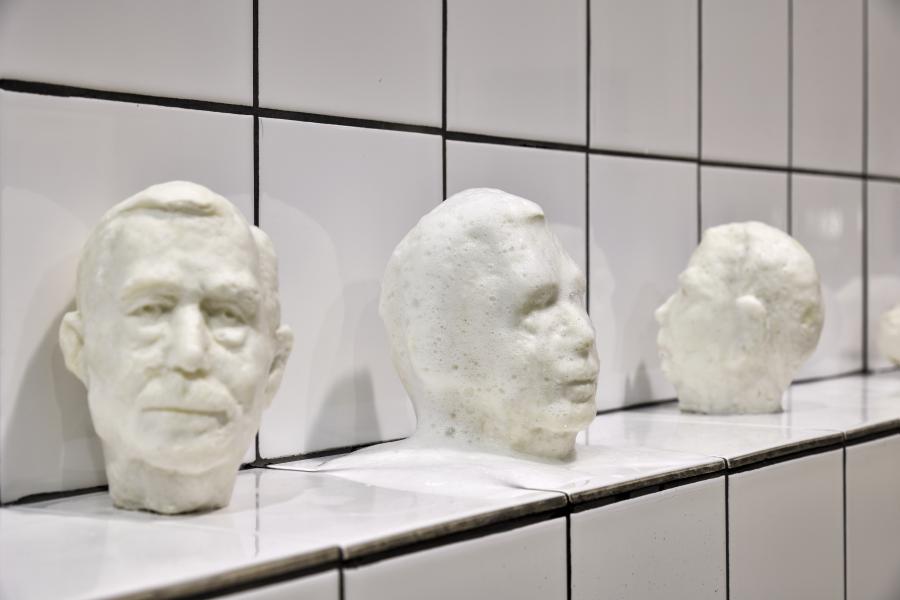 The power of the powerless

November 1989 is an important political turning-point in the Slovak modern history, which has also essentially influenced the status of art in society. The newly-acquired freedom of expression enabled artists not only to present their works in public but also to express critical opinions. On the occasion of the 30th anniversary of the November events Kunsthalle Bratislava has prepared The Power of the Powerless, an exhibition focused on art that critically reflects on social problems in the Slovak and Czech context. The exhibition maps how various political issues have been reflected in the work of artists in both countries during the past thirty years.

The range of themes revealed in the exhibited works is extremely wide, from targeted criticism aimed at specific political figures to society-wide problems, including the social position of women, consumerism and racism. Particular historical individuals are featured more as episodic figures in the social atmosphere: they call attention to political mechanisms. An issue on which, post-1989, we as a society have absolutely failed – the solution of environmental problems – is an important theme in the exhibition. As far back as the 1970s, Rudolf Sikora and many others were actively drawing attention to the need to stop the pollution of the living environment. Ever since, this theme has been constantly linked with a symbolic exclamation mark.

Brief texts help to set the individual works in their time of origin, illuminating the problems which Slovak and Czech society lived with in the given period. The Czecho-Slovak dimension of the exhibition is important because of the connectedness and mutual influence of the Czech and Slovak art scenes and also in terms of a shared political past which is formative of the social atmosphere to this day. Some of the artworks are statements about their time, but in large part they have a timeless validity. While individual artists may clash with one another in their political orientation, the message of their works tends towards an assertion of the principles of freedom, human rights and democracy. The criticism contained in the works is by their author’s free decision; it is not linked with specific political parties and is directed “from the bottom up”. Having said that, the possibilities of artistic freedom are an indicator of the state of society.

The Power of the Powerless refers in its title to the internationally famous essay by Václav Havel, written in 1978. Havel’s text describes the possibilities of revolt in an unfree society. Despite the change of political regime, this essay still has its universal validity. It points to the fact that each person is not only a victim of the system but simultaneously by his/her participation becomes its instrument and support. Emphasis is placed on the stance of each individual and on the individual’s options to revolt against injustice. Despite the seeming futility of the attempt, which often involves rejection on the part of the public, every political gesture of protest contributes toward a gradual rectification and a social change.

In association with the art exhibition, Havel’s naming of The Power of the Powerless becomes a metaphor of the influence that art has on society. Critical art, which on principle does not share directly in political power, is often on the margins of public interest and political representatives’ concerns, or alternatively it is a target of power-holder’s attacks. Current Slovak and Czech reality correspond to that pattern. Contemporary art often emerges “in spite of” rather than thanks to the powers that be. The Power of the Powerless has been produced for the state institution Kunsthalle Bratislava, but it is being held in conditions where the future status of this institution has been unclear and under a long-term threat.

During the past thirty years the censorship has only rarely made direct interventions in our milieu. However, censorship takes on less immediately obvious forms: discontinuance of grant aid or cooperation, deprivation of space, “unexpected” technical problems, and so on. Some of the artists who are exhibiting have actually suffered direct financial or legal damage on account of expressing their critical opinions. Despite that, the power of “powerless” art resides in gradually disturbing and changing the social atmosphere and highlighting the moral dimension of politics.

Besides individual initiatives, however, collective action is also extremely important. The art scene, traditionally rather individualist and competitively focused, is coming to recognise this ever more urgent reality. It is evident that if contemporary art wants to have an important standing and not just plead from the “margin”, then it is necessary to have solidarity, collective organisation and the raising of specific demands for spaces, financing or artistic freedom. Some the groupings and the collective initiatives which have emerged on this basis in recent times are represented at the exhibition.

The exhibition also features a critical reflection on the appeal to Havel’s legacy, in Martin Piaček’s Václav Havel: Washing out (2014). There are small Havel busts in the form of soap. The process of washing out may refer to the gradual dissolution of ideals which comes about through manipulation of the legacy and also of the real political activity of prominent figures. Washing the hands with Havel is also, however, a symbolic criticism of opportunistic employment of the legacies of the past. This artwork operates, as do Havel’s plays, with humour and irony, which are frequently the instrument of art with a political message. Piaček’s work, like the other works presented at the exhibition, urge us towards openness and critical judgment, and at the same time to self-criticism.

A walk through the exhibition is (just like the past thirty years) a “walk” along a road that leads from revolutionary ideals, through the notion of the exhaustion of grand narratives and the end of history, to the realisation that democracy is a condition which is not maintained automatically but demands activity by each one of us. These artists remind us that freedom of expression is not just about freedom but also about personal and collective responsibility for the state of the world.

In the exhibition is also presented the project of organization Post Bellum named 20th-century stories. The visitors can listen to audio recordings describing the revolutionary events through the point of view the Slovak and Czech artist. In the records, they recall the life before 1989, the regime change and how was the influence of it on arts.

// Ms. Zuzana Čaputová, President of the Slovak Republic, has taken this event under her patronage. //