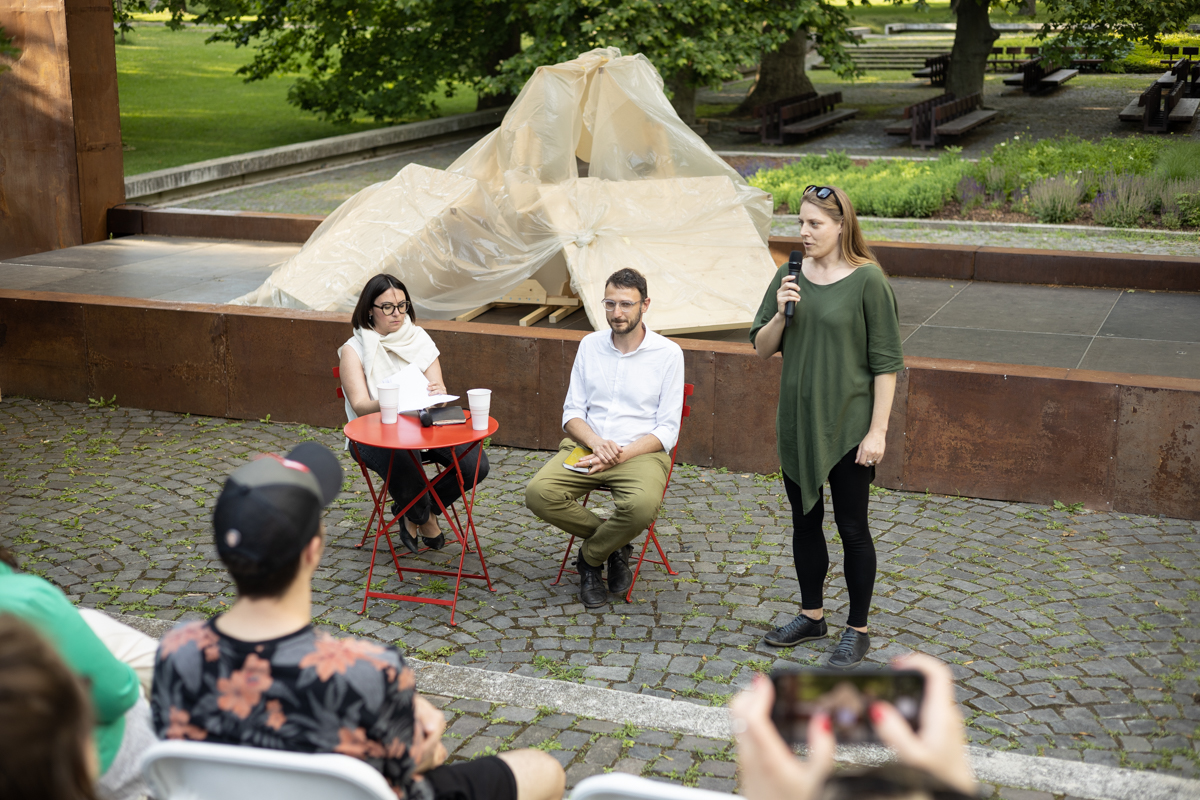 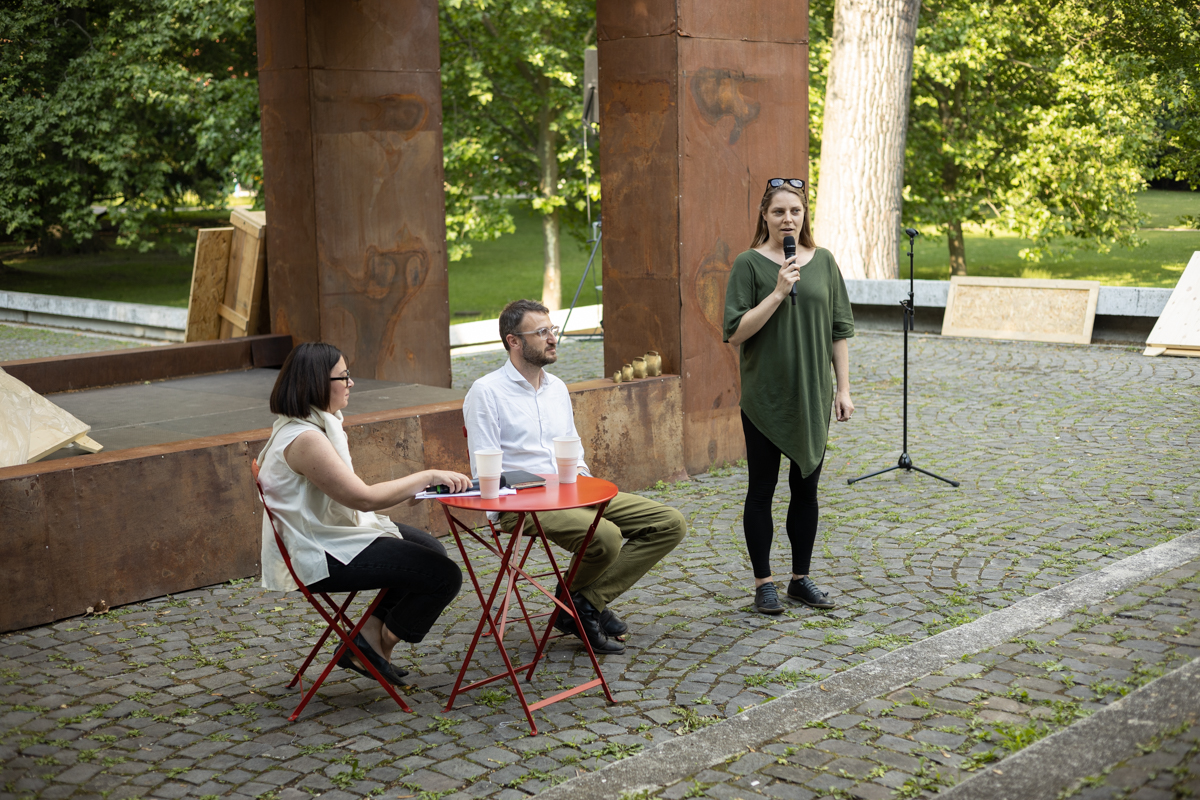 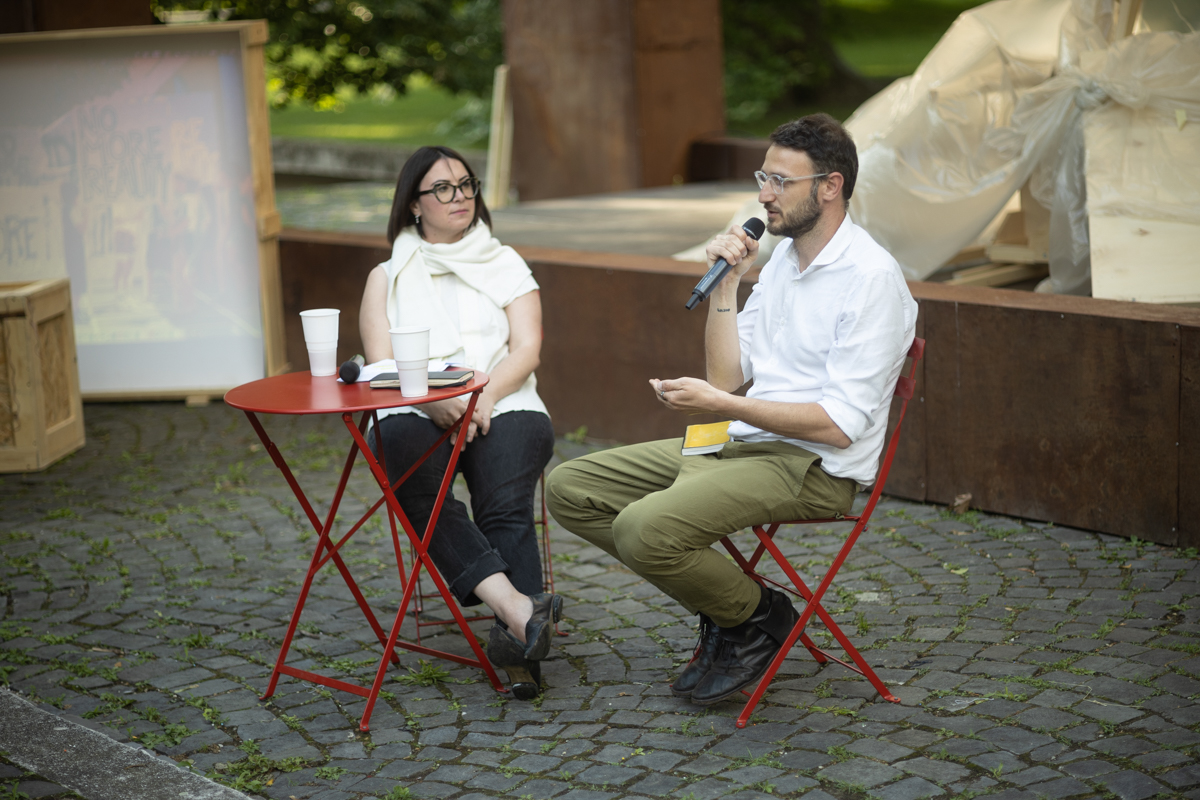 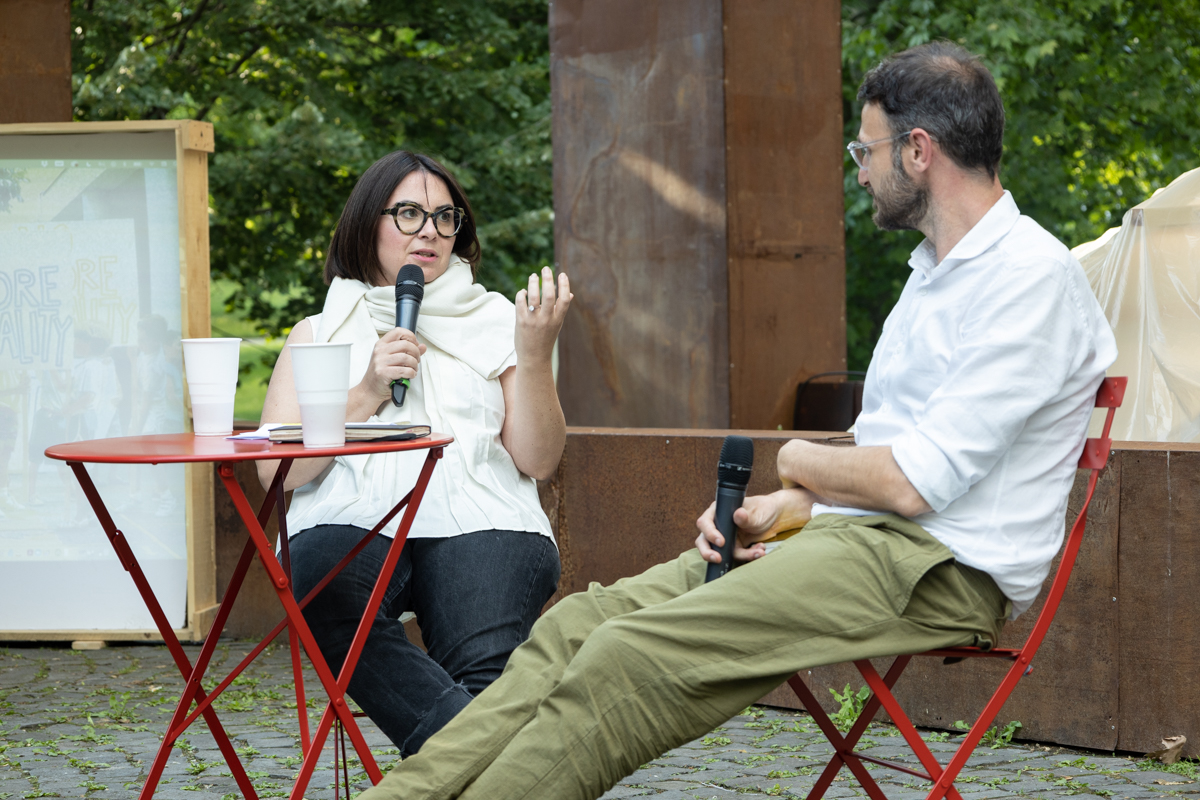 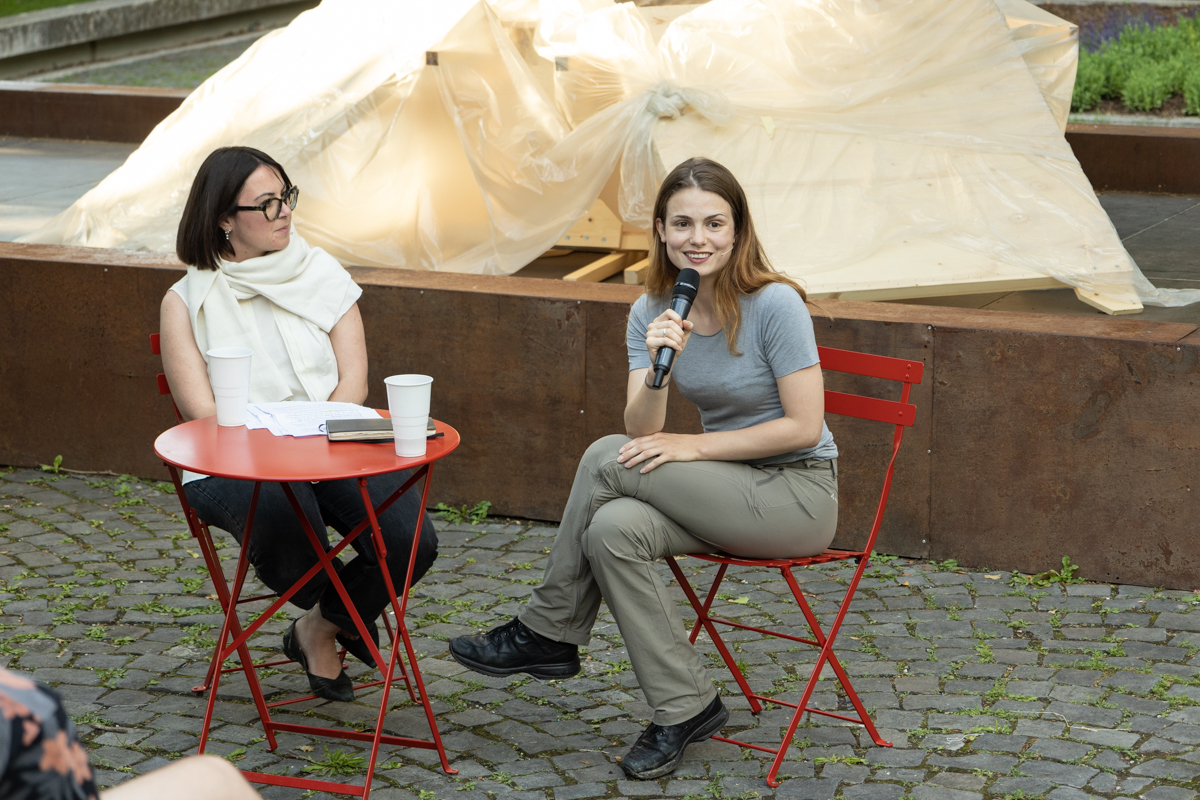 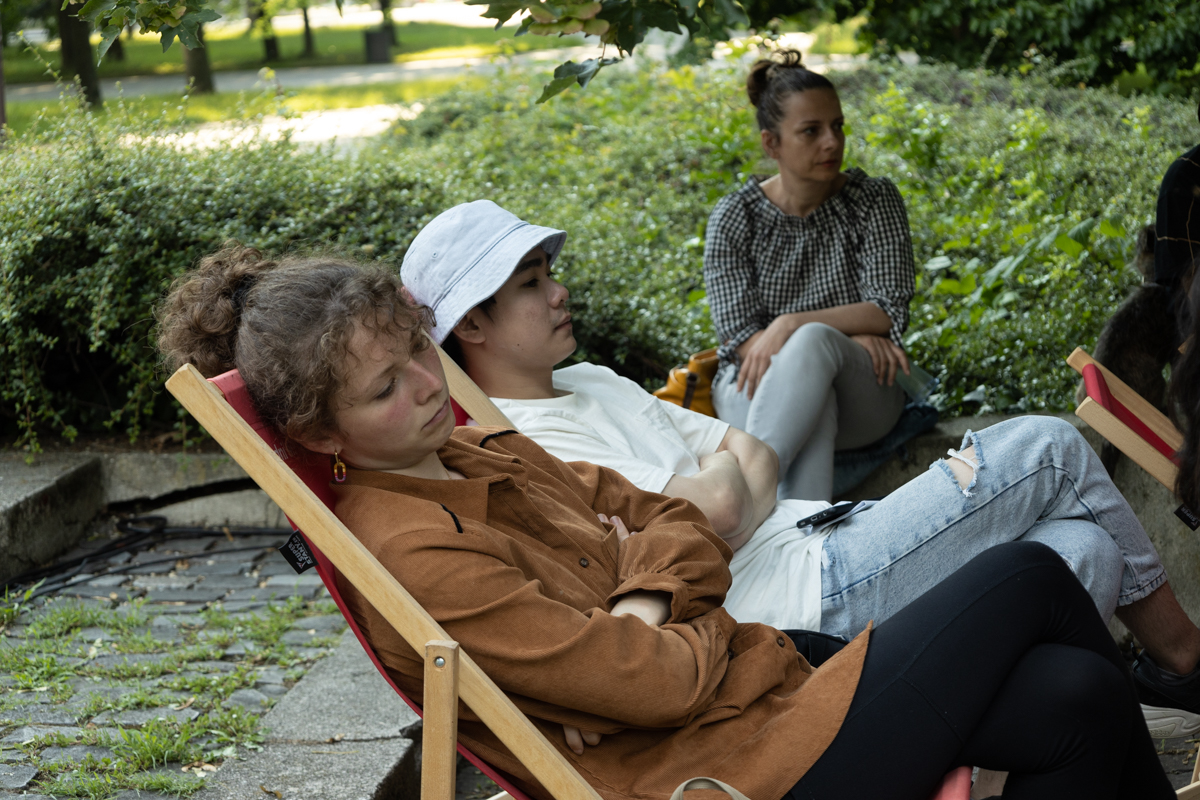 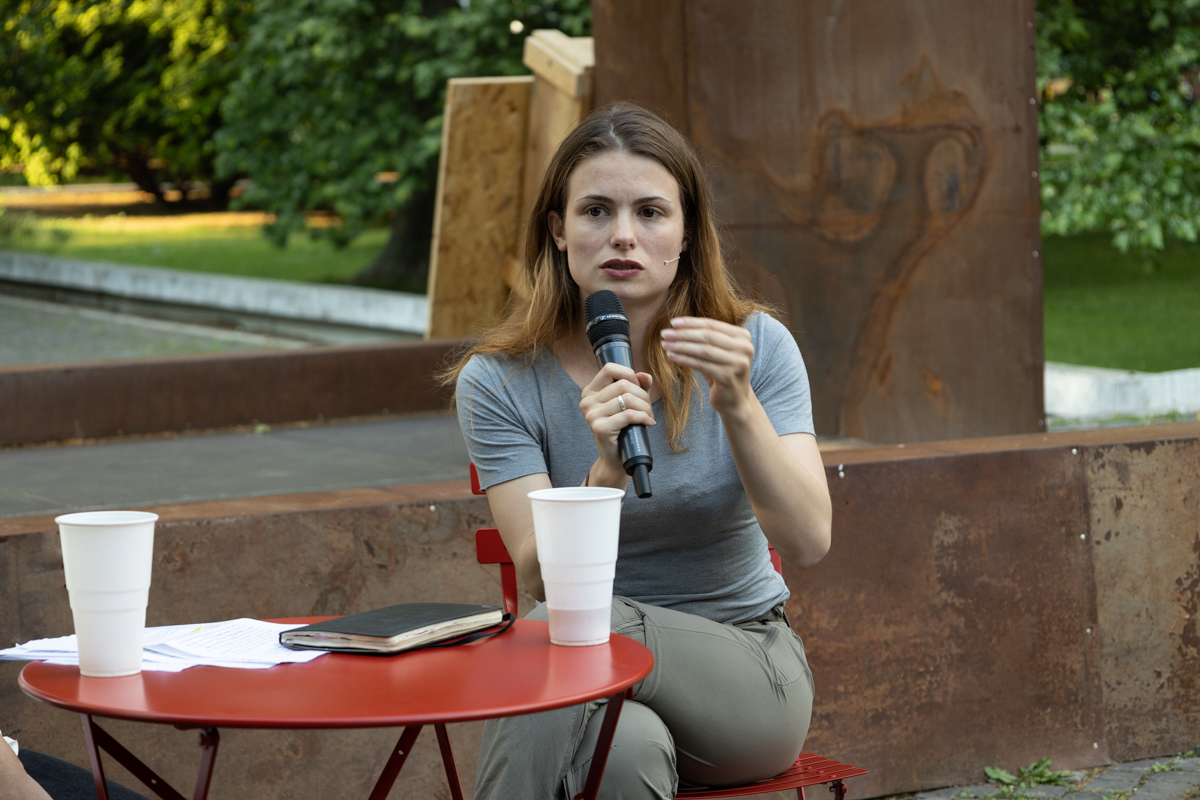 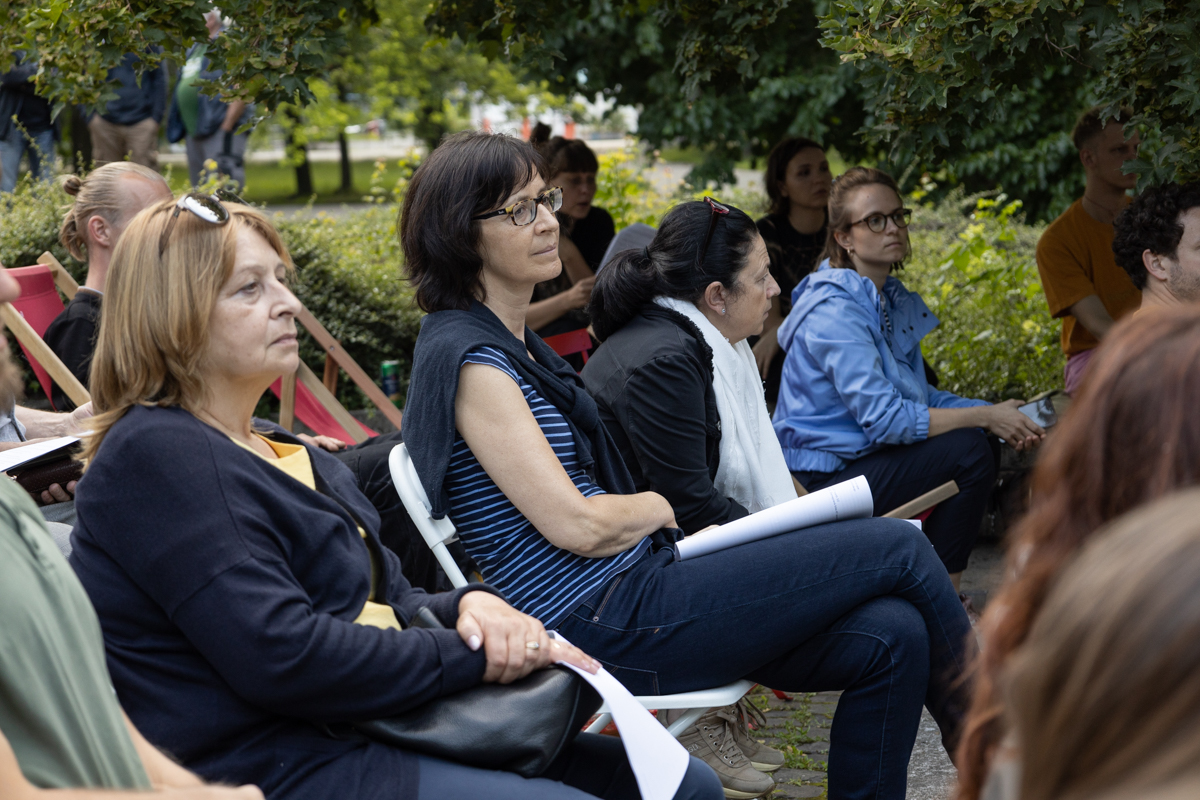 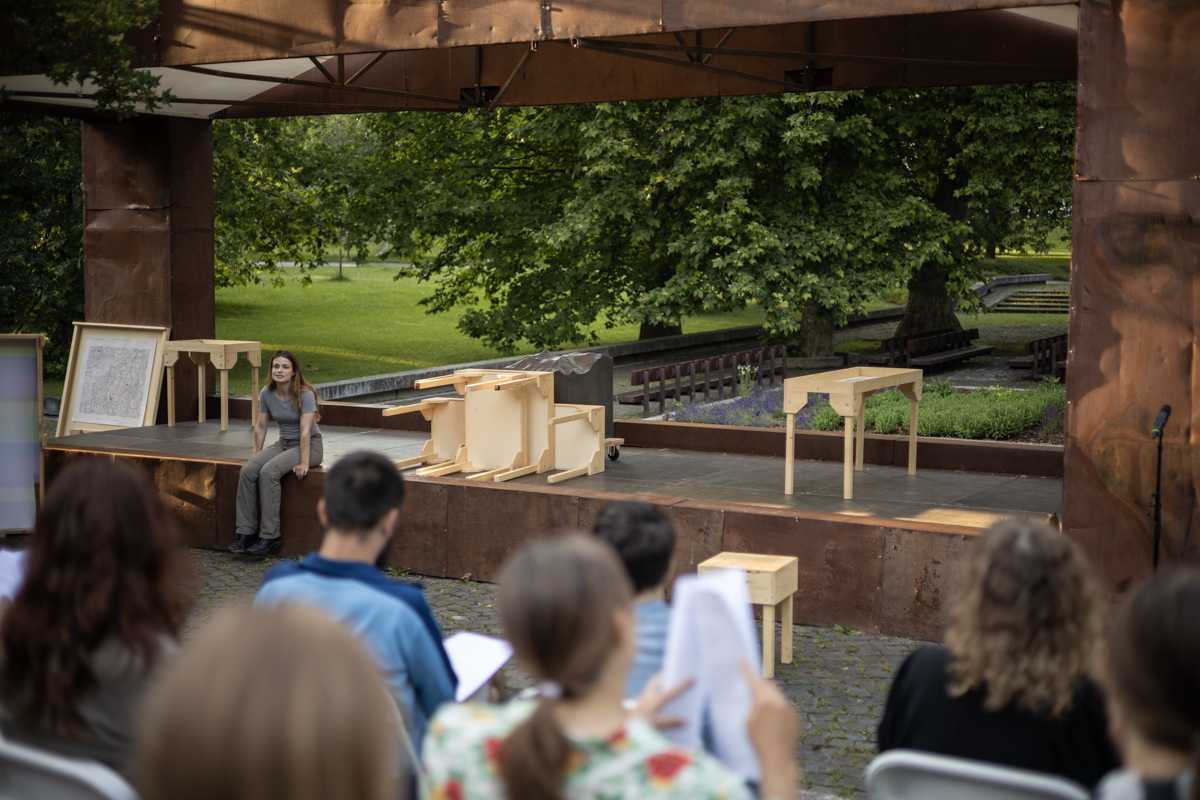 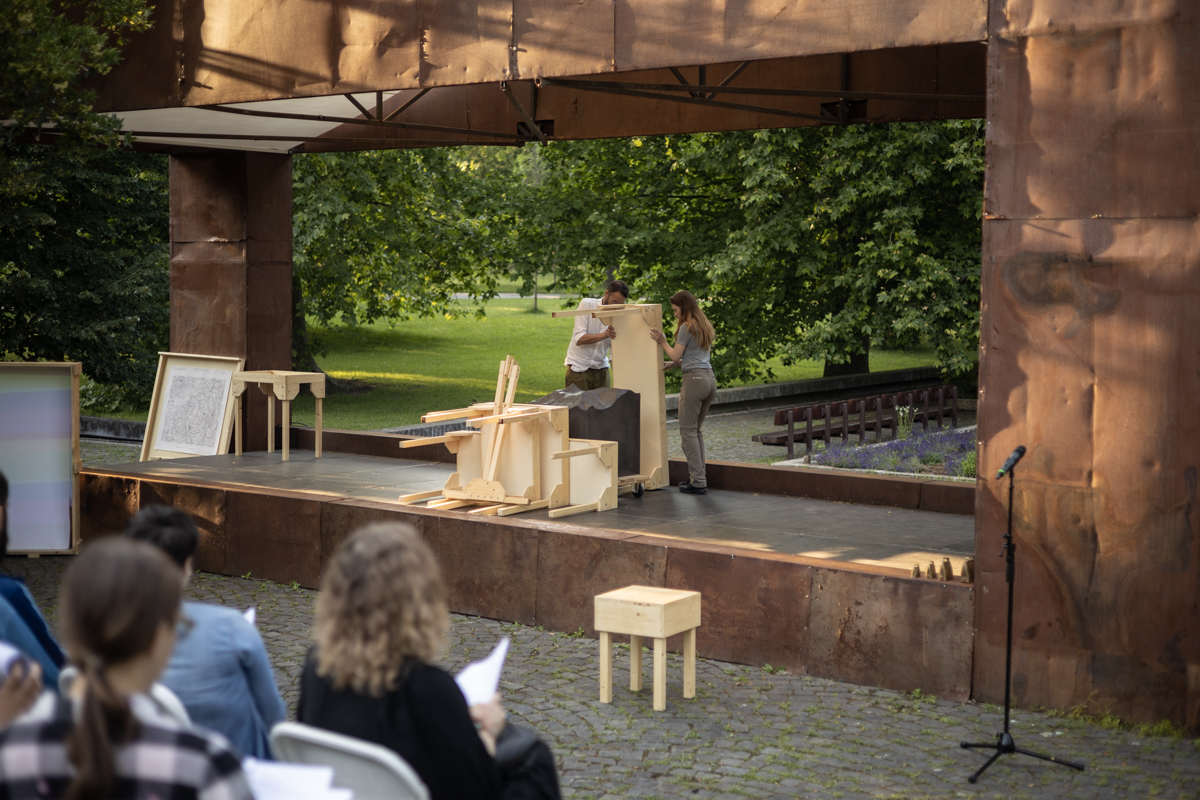 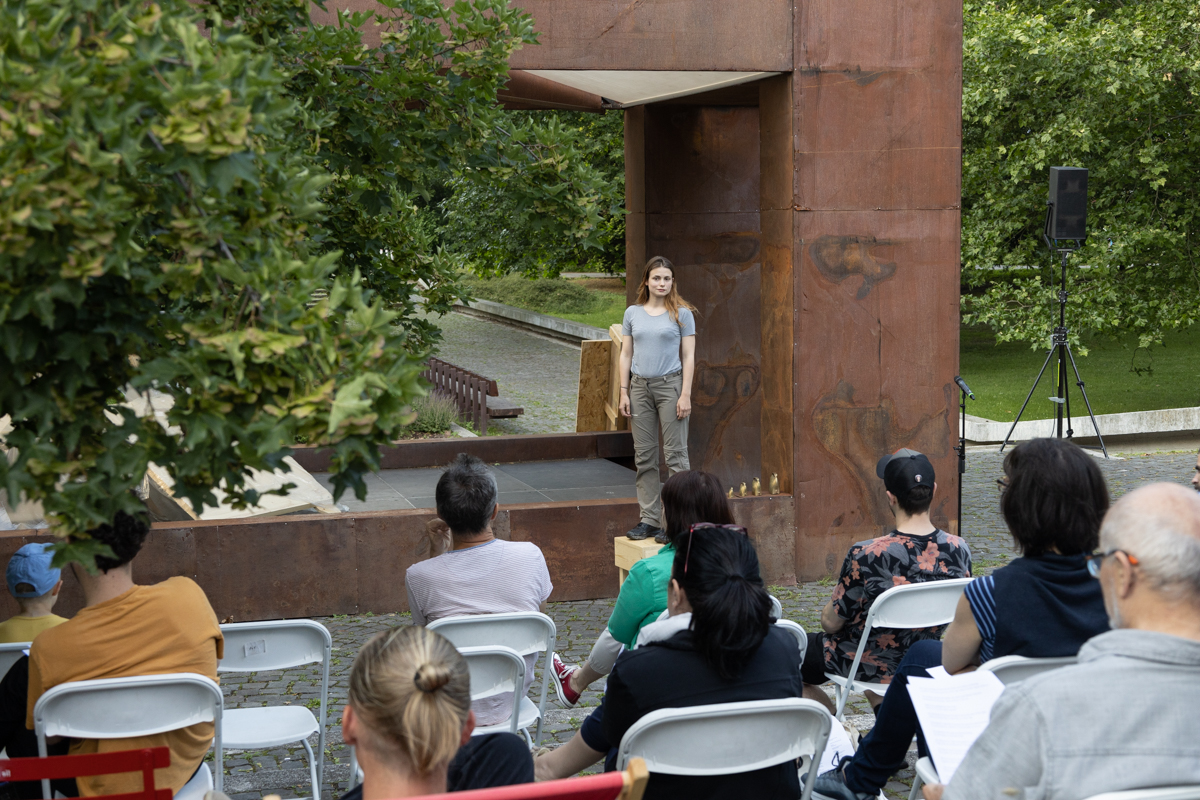 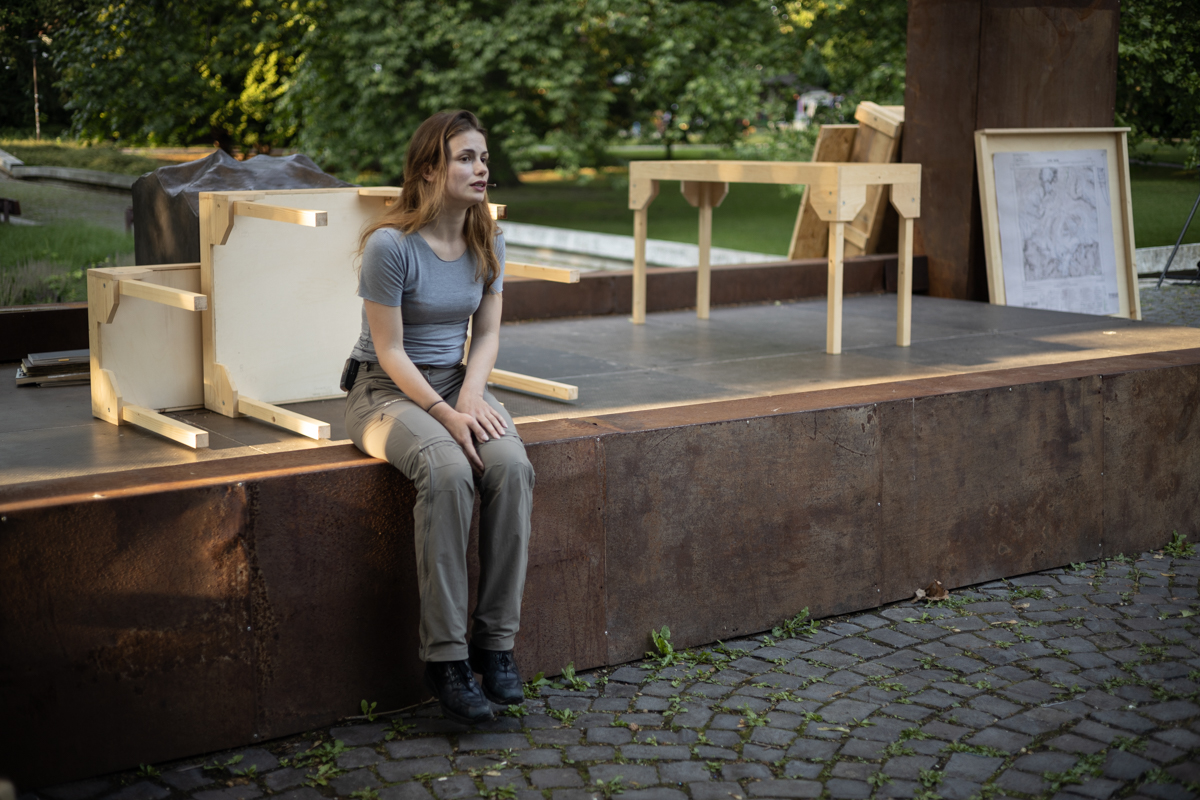 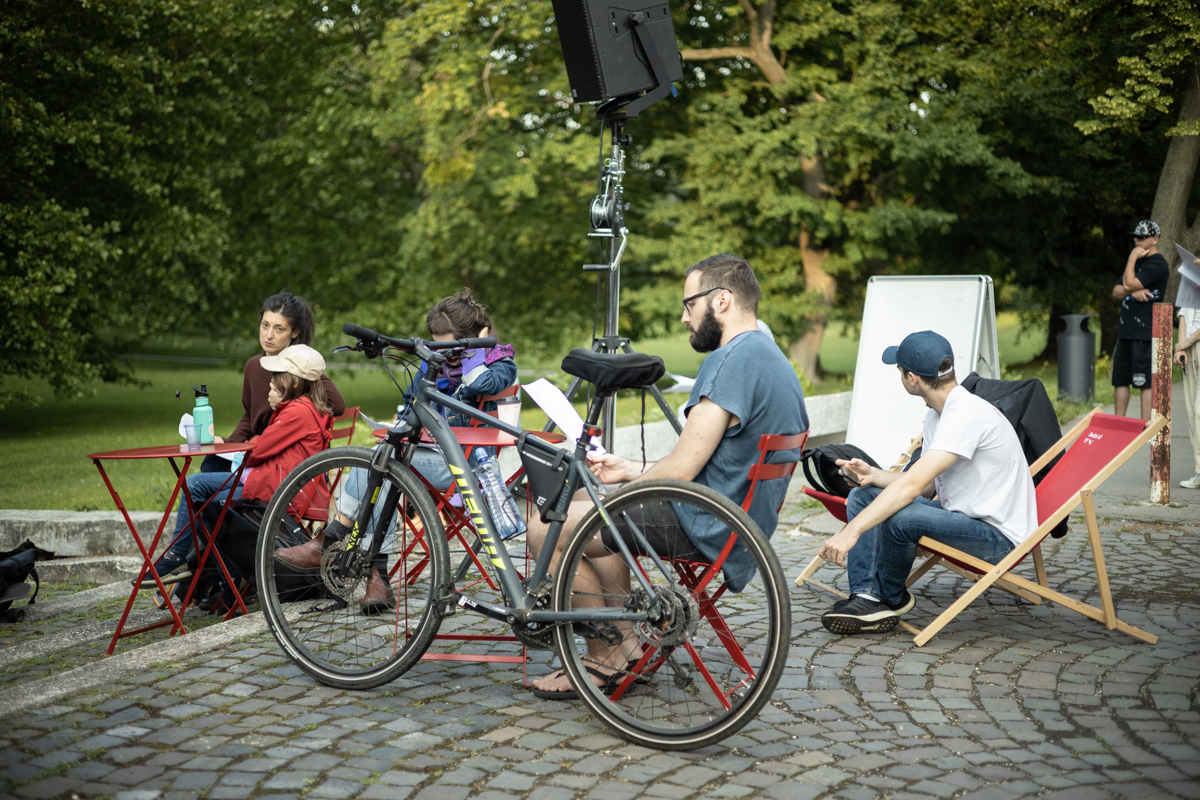 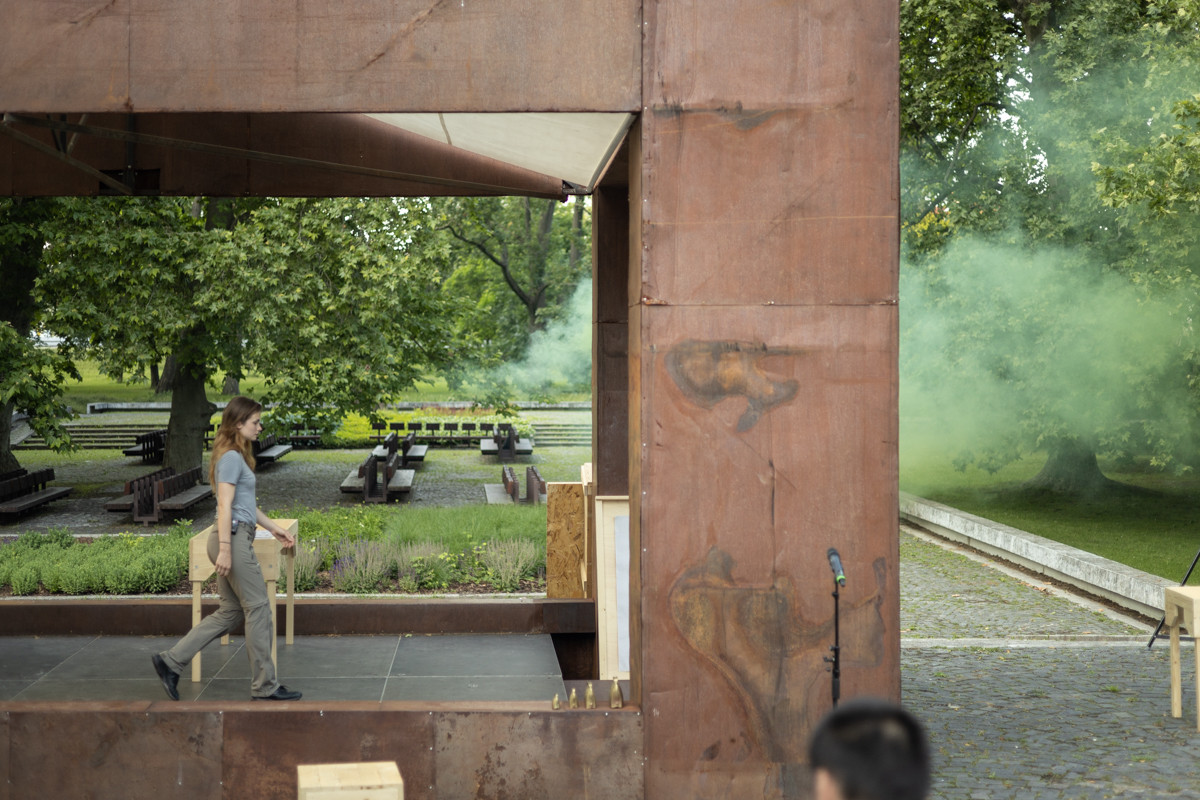 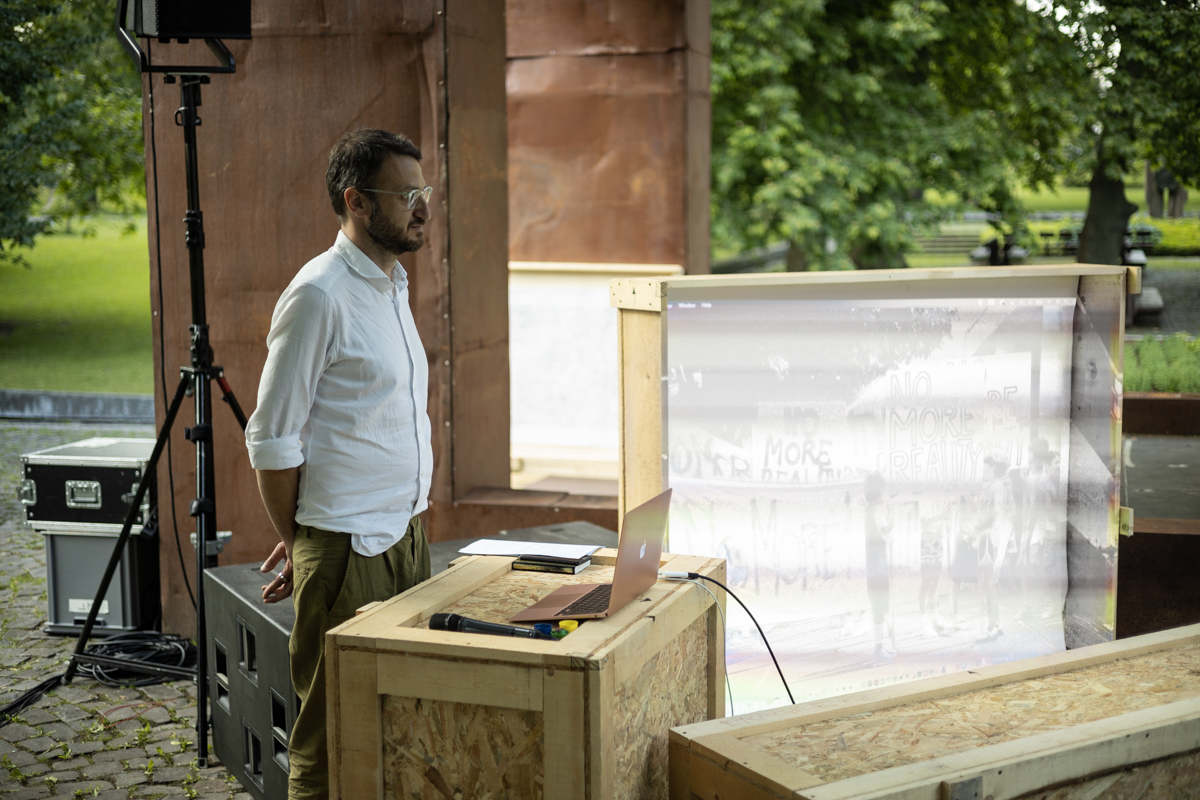 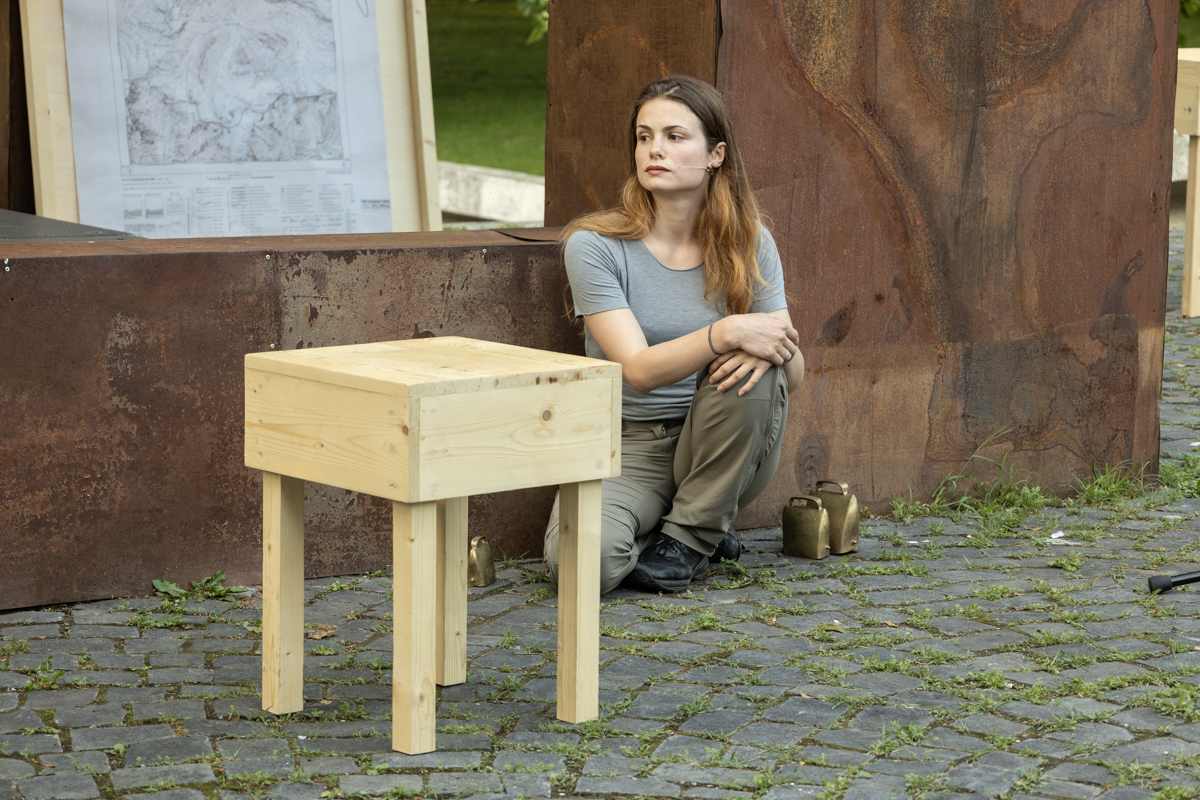 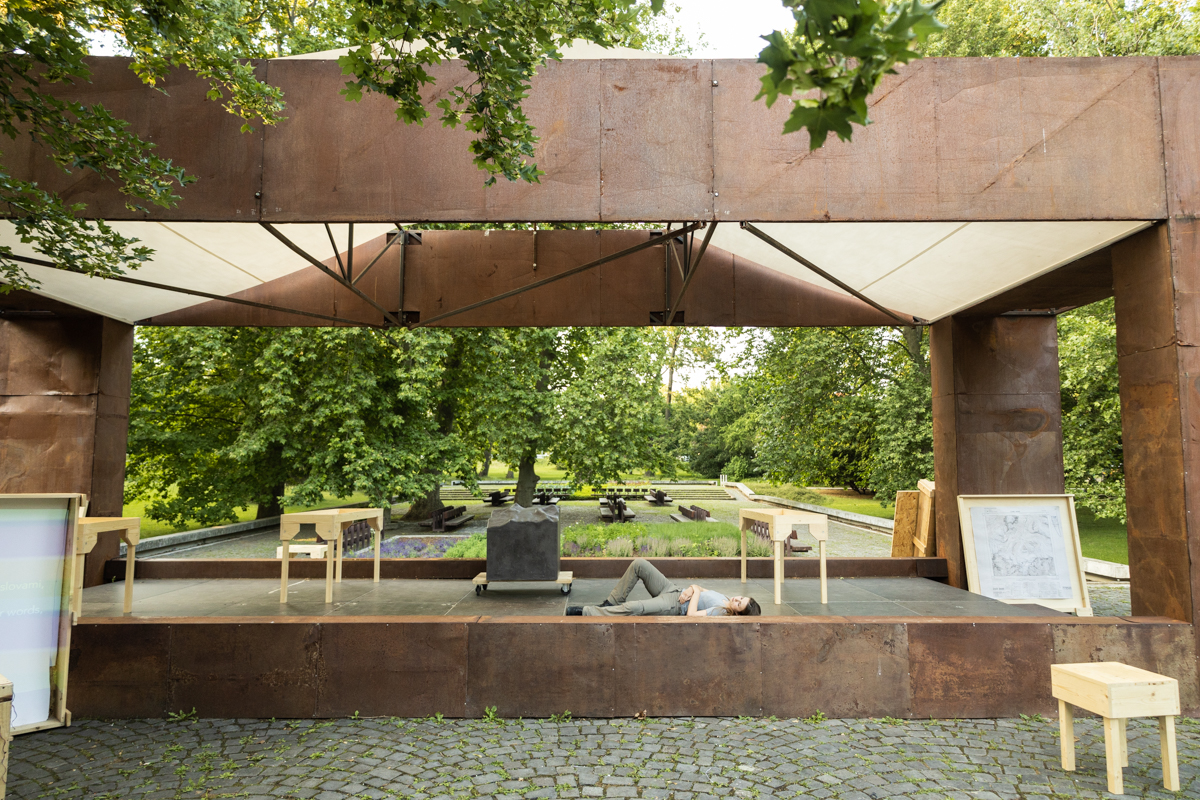 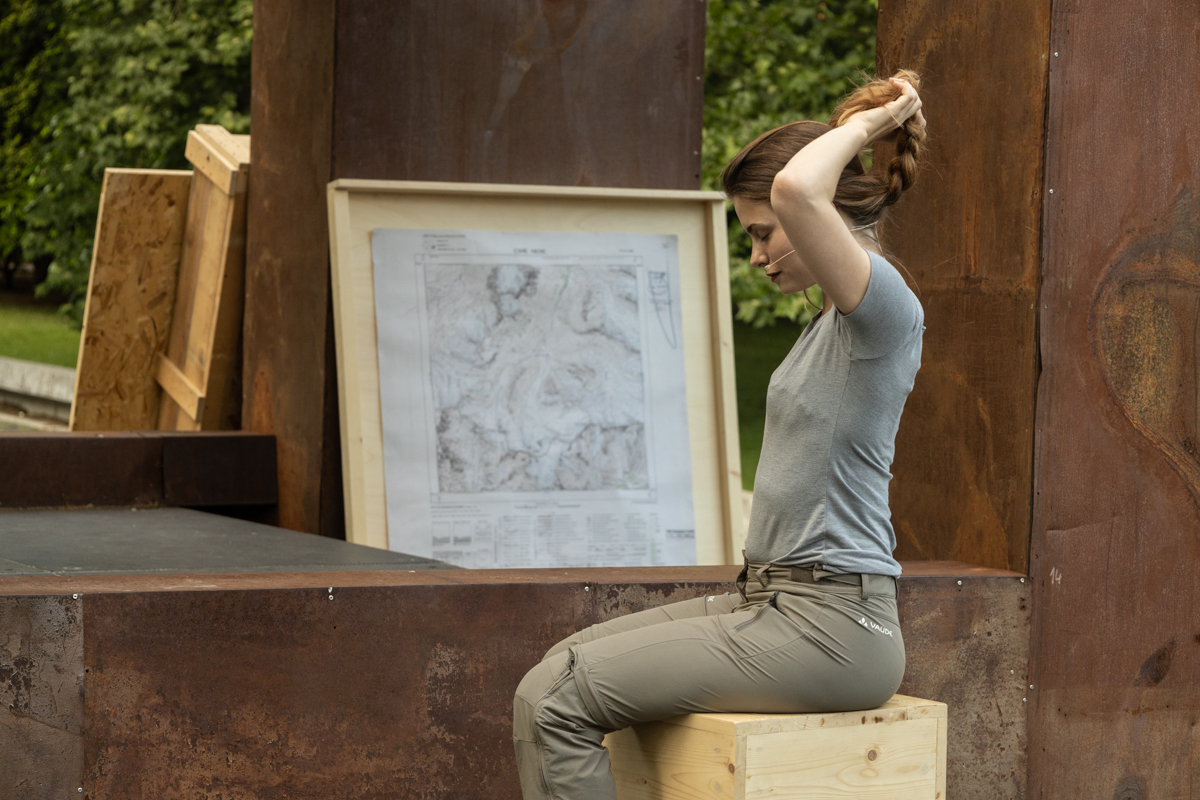 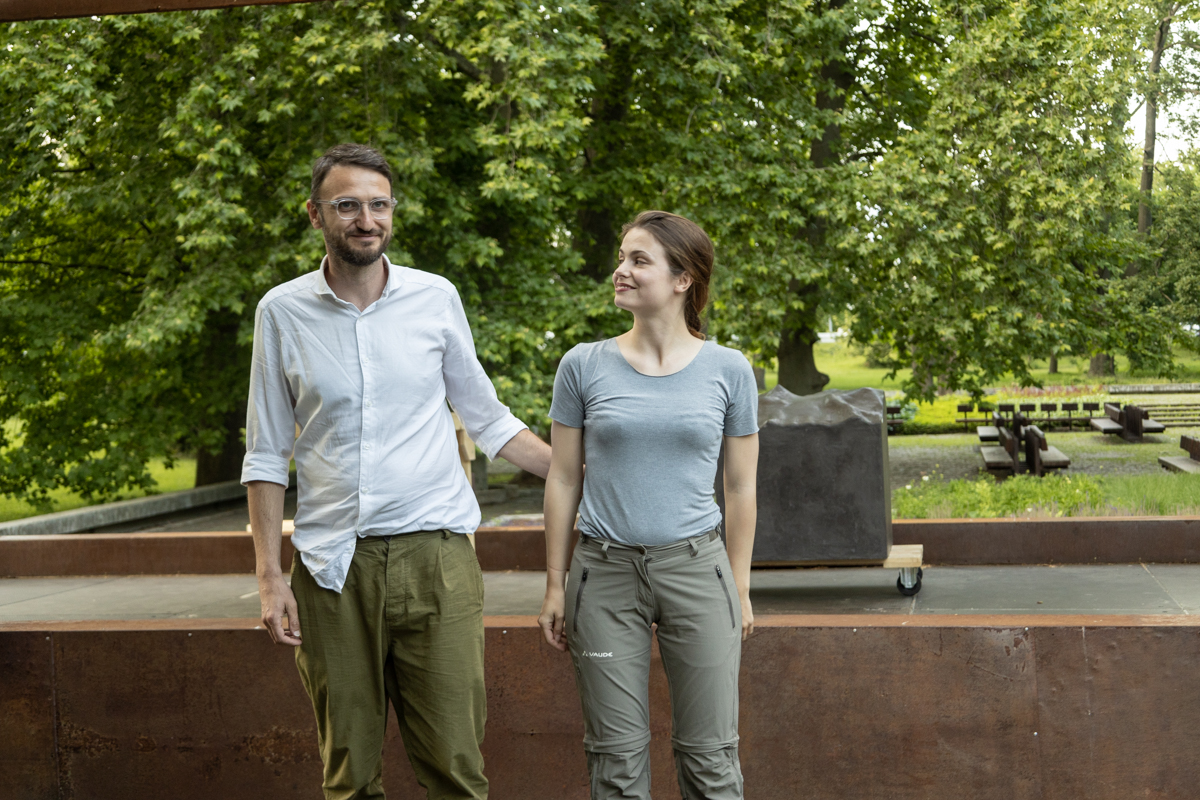 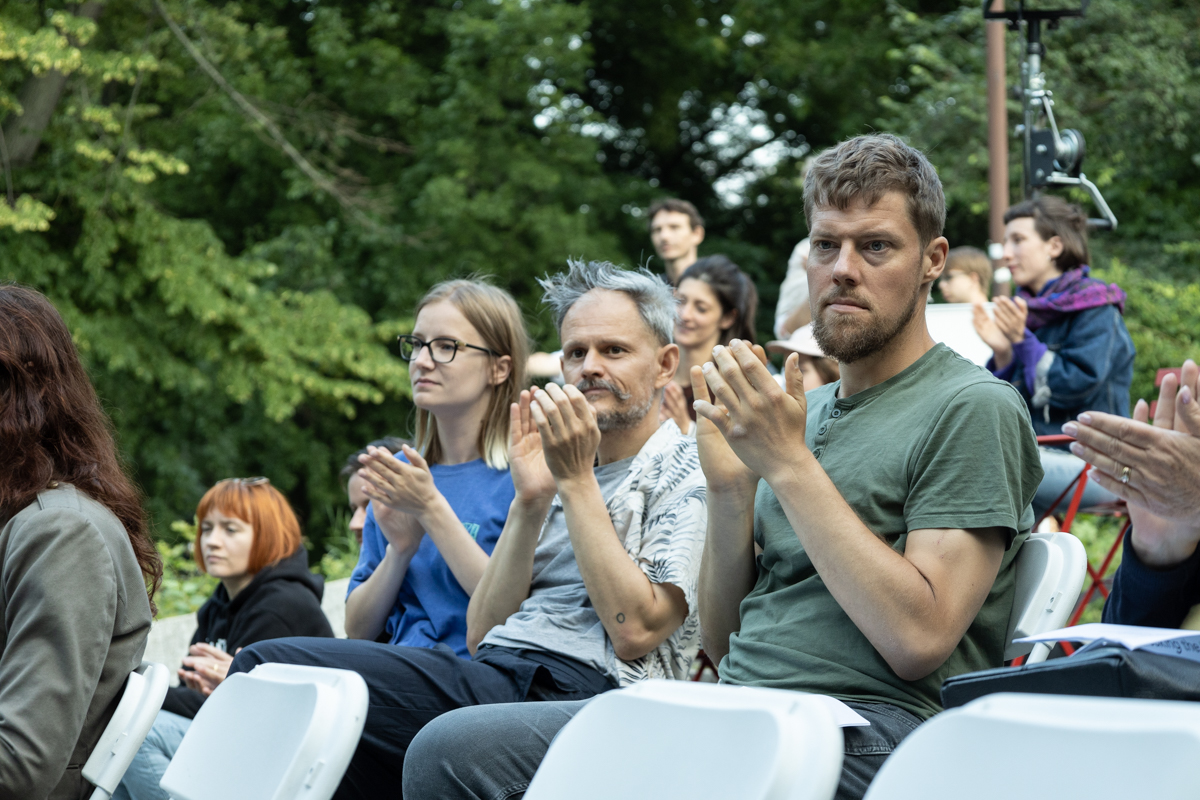 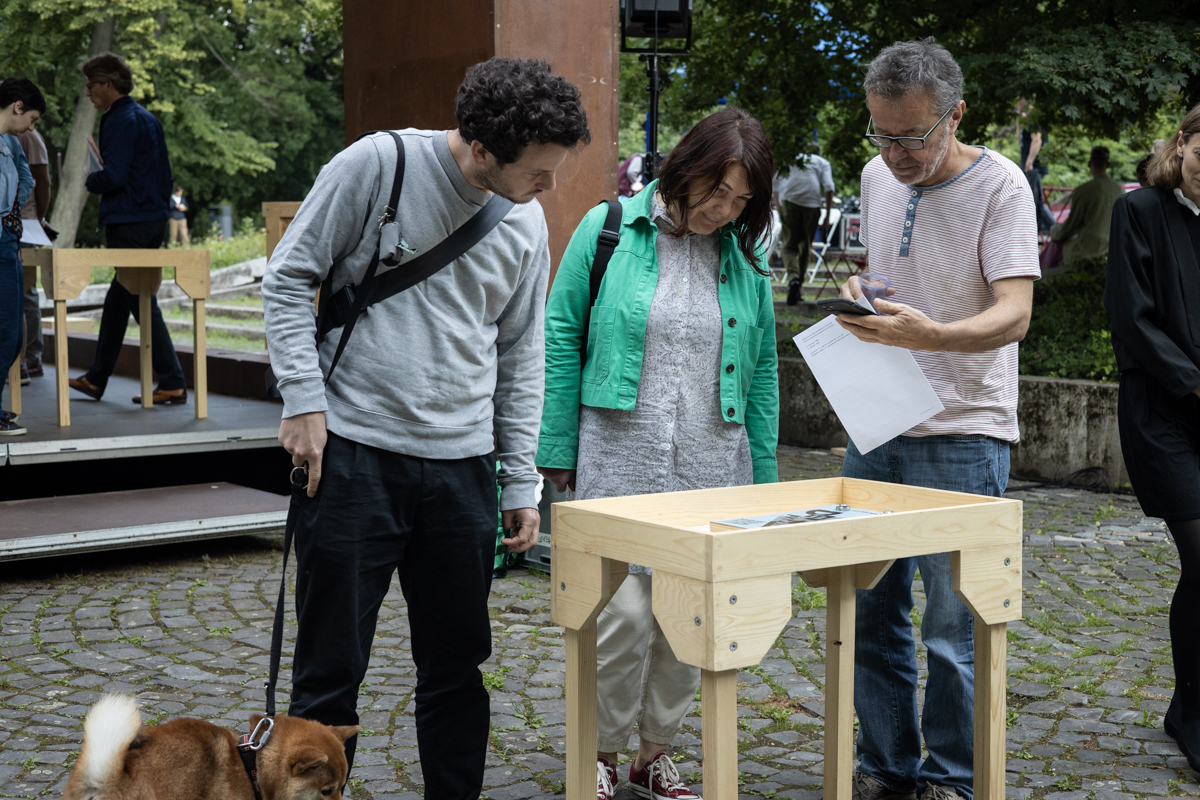 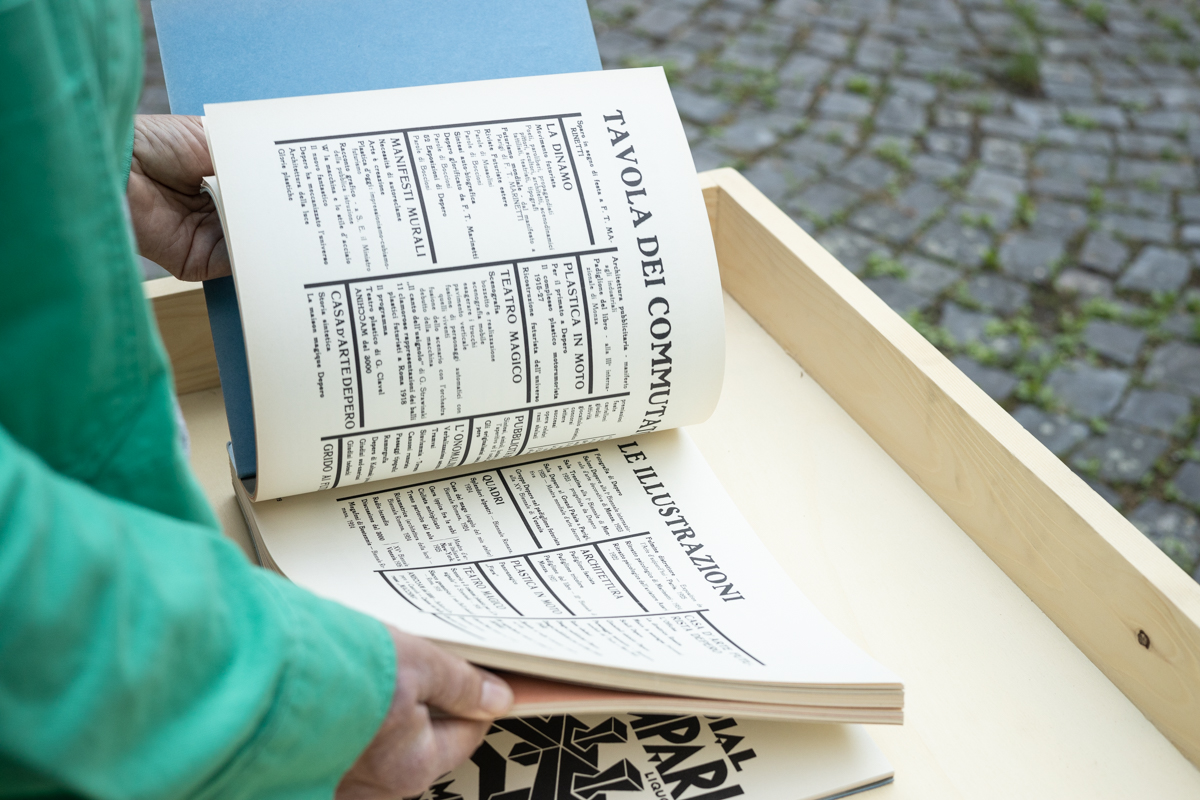 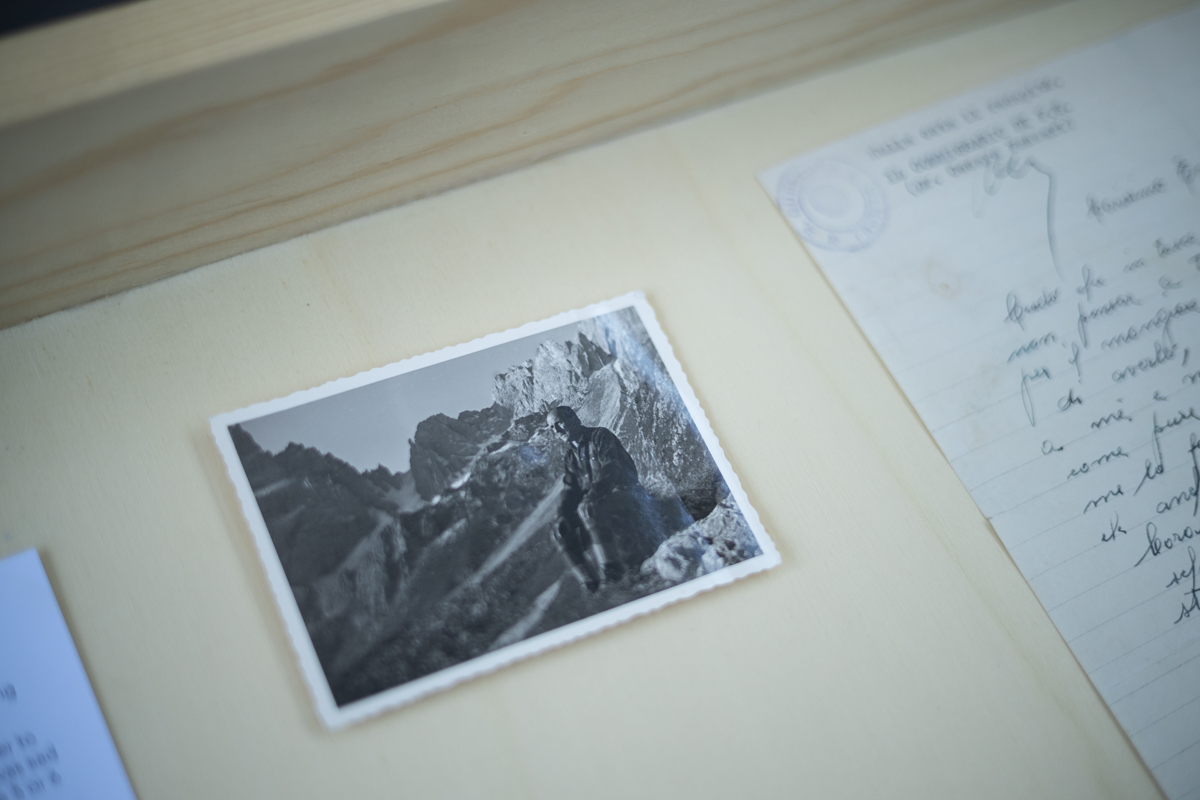 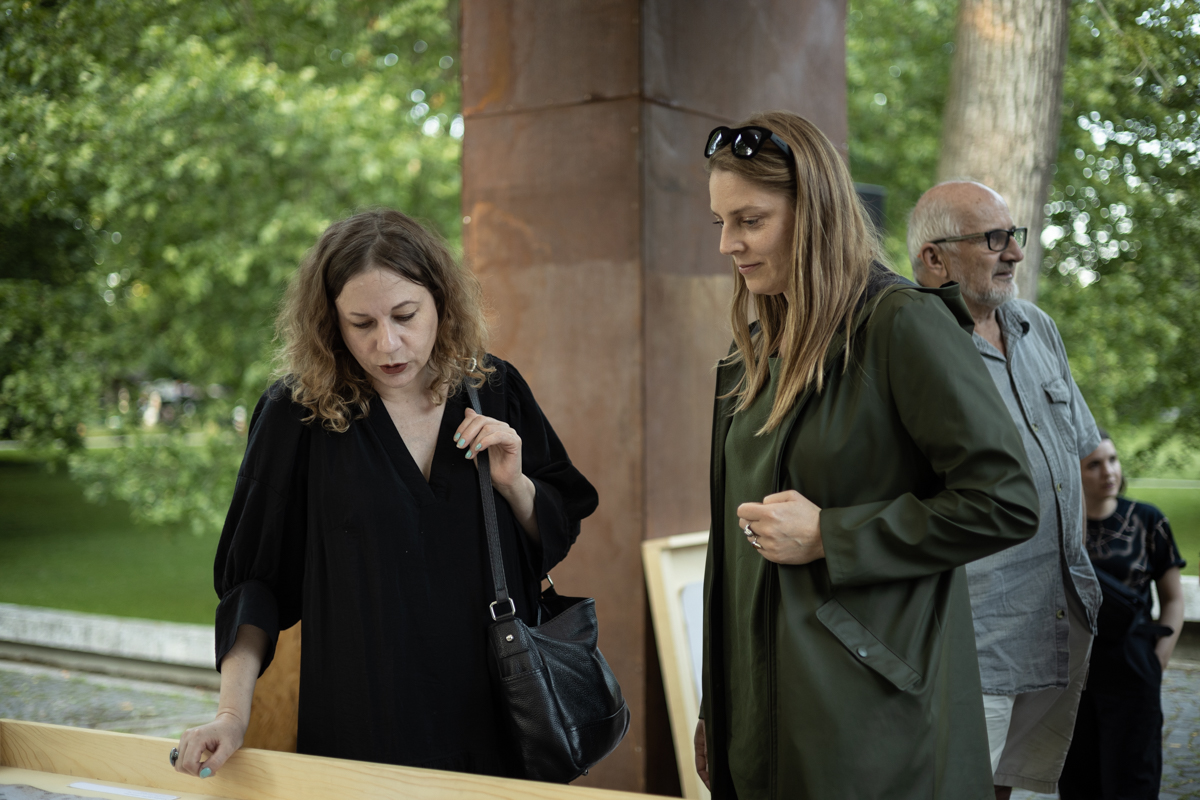 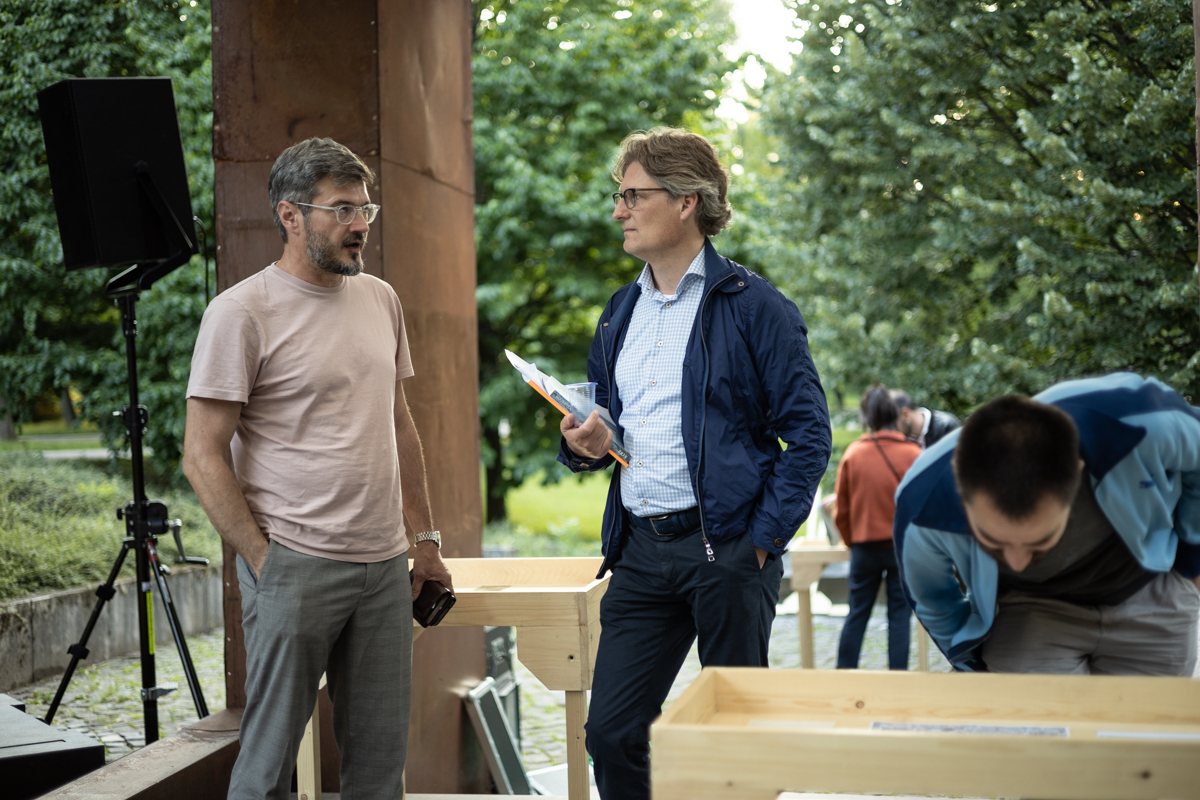 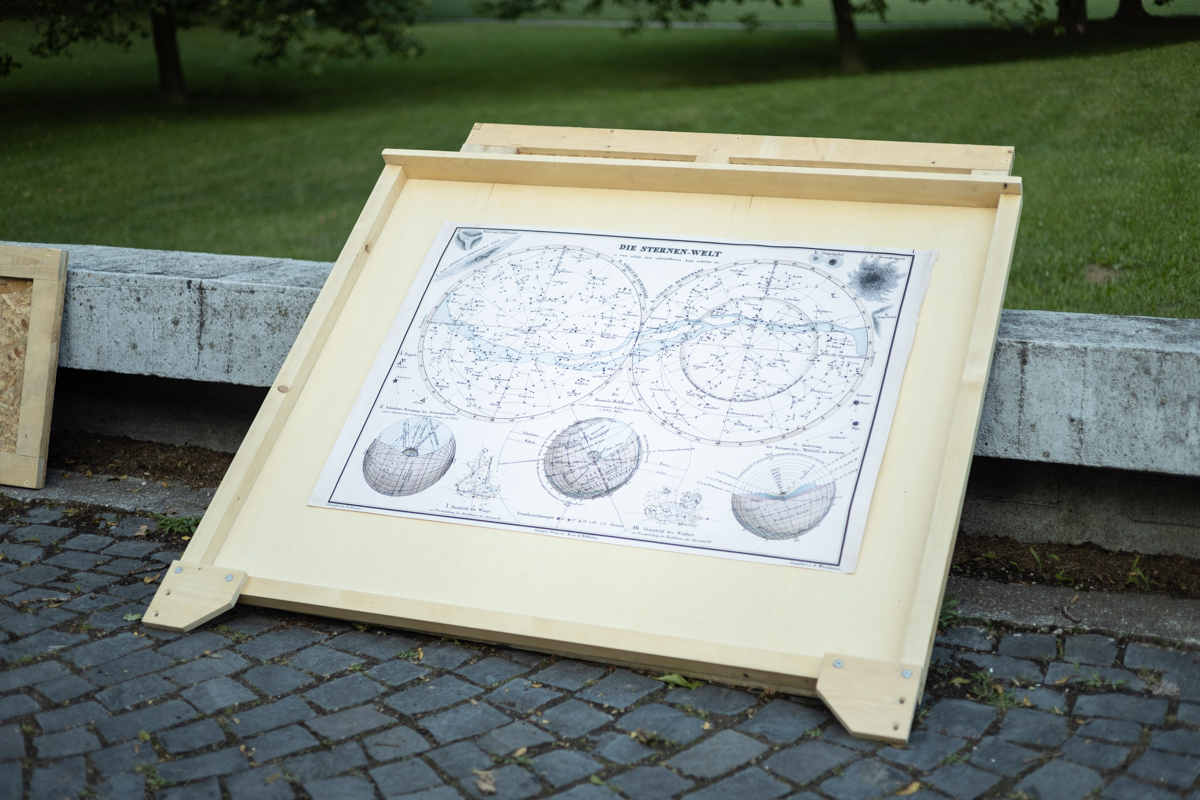 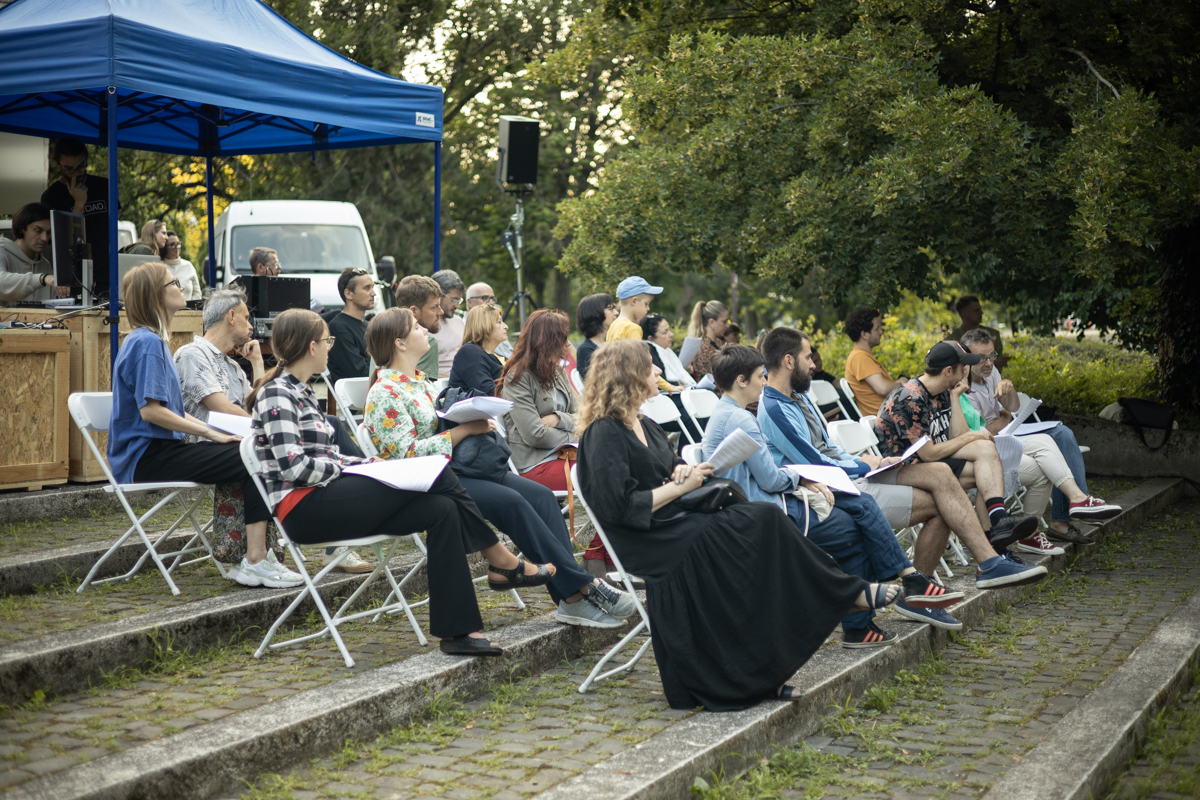 The performance Breaking the Ice by Italian artist Filippo Andreatta, curated by Italian curator Giulia Ferracci (MAXXI Museum, Rome), is based on the family story of the artist, whose grandfather came from the Alps, a place where a glacier formed the natural border between Austria and Italy. However, this is melting due to global warming, and the border, which has always been considered a fixed point, is melting and shifting. Part of the program is a discussion of the artist with the curator.

Breaking the Ice / Rompere il Ghiaccio – is a performance and temporary exhibition by OHT – OFFICE FOR A HUMAN THEATRE, an art and theatrical project set up in 2008 by Filippo Andreatta, an Italian director who reflects on the complex relationship between landscape and politics, and between personal memories and collective events. Breaking the Ice / Rompere il Ghiaccio is part of A Plant, a programme in Bratislava curated by Lydia Pribisova that explores the theme of climate change. The work, as staged for this occasion, takes inspiration from letters written between Elsa and Enrico, the director’s paternal grandparents. During the years when they were punished by the Fascist government (1936-1942), they were sent to the farthest ends of Italy: Enrico was exiled in the south, while Elsa had to stay in the Alps. The performance-work is symbolically set on the Gräfferner Glacier, the dividing line between Italy and Austria, which was marked out in 1919 but declared a metamorphic border in 1994 since it is subject to natural changes in the climate. This moving border, which is represented by the glacier, becomes the metaphor for the void brought about by the separation between Elsa and Enrico and it also evokes the theme of the vulnerability of geopolitical, social and personal boundaries. During the performance, Magdalena Mitterhofer, together with Filippo Andreatta, moves the props – tables, wooden blackboards, and display cases – as if they were platforms of ice, which slowly slide into the space and become the supports where maps of the mountains and displayed, along with a map of the stars and the love letters that Elsa and Enrico wrote to each other. Accompanied by the sounds created by Davide Tomat, Magdalena Mitterhofer sings a melancholy yodel song with no lyrics, of the type typically used by shepherds in German-speaking areas to call in the animals through echoes in the valleys. Reclaiming an art form used by a minority group is a further element in the theatrical narrative of Breaking the Ice / Rompere il Ghiaccio, which intertwines the cultural roots of the place with the geological origins of the mountains, ultimately illustrating how history has harmed the local communities. Note after note, the ode that emerges paints a poetic and organic picture of a political landscape made up of people’s lives, of the great passages of history, and of the memory of a changing geography.

The Austro-Hungarian Empire dissolved in 1919. At the same time, Italy and Austria chose a natural watershed as their border; a dividing line in the middle of the Alps coinciding with the Gräfferner glacier on the Similaun mountain at 3,606 m altitude. After the years of the fascist regime and the Italianisation of Südtirol, the border was marked again during the 1970s. Some cartographers noticed that the line on the maps no longer coincides with reality. The gradual melting of the Gräfferner glacier shifted the natural watershed. The border between Italy and Austria is literally melting.

My grandfather’s name was Enrico Andreatta. He was born under the Austro-Hungarian Empire and lived in Innsbruck for a few years before returning to Rovereto during Mussolini’s dictatorship. There, he met my grandmother Elsa and began working at the Mercurio typography where in 1927 he collaborated with the futurist Fortunato Depero on his famous Bolted Book. While Depero was giving Benito Mussolini a copy of his Bolted Book, my grandfather was accused of communism and sent to confinement. Since then my family has kept a copy of the Bolted Book, but transformed into a faded family photo album.

A bilateral agreement between Italy and Austria in 1994, converted into law in 2005, admits the existence of “gradual natural changes in the borderline”. For the first time, a border is recognized as a slowly moving entity. Its gradual retreat contradicts the symbolic firmness of the borders just as the slow but constant correspondence between grandmother Elsa and grandfather Enrico exceeds the isolation to which my grandfather was condemned. Slow and ungrammatical words from which an intensity subjugated by fascist laws transpires; sweet words that exceed the needs with which Grandma Elsa breaks the ice in her first letter:

“Dearest Enrico, I think you have 70 lire for the rent left in your pocket.”

The words of grandfather Enrico and grandmother Elsa echo Alexander Langer’s words, which deny the existence of a hegemonic ‘history’, firm, unique and shared by all. Just as the border binds to the glacier and follows its slow retreat, so history binds to the bodies, emotions and thoughts of every single person. Rompere il Ghiaccio is therefore a performative project that imposes an ecological conversion on the narrative by slowing it down. A slowed down narration exploring the political, landscape and romantic borders of a cross-border area like Trentino-Alto Adige/Südtirol. A slowness similar to the melting of the Gräfferner glacier that puts the very idea of the border into crisis, just as love put the isolation of the fascist confinement into crisis.

Partially inspired by authors like Annie Ernaux, the project deals with personal and impersonal biography as a form of social memory. Therefore, the performance can only emerge in the memory of the spectators and not via images produced by the show. This is why the performance will be visually radical; completely without spectacular. There’re no lights nor effects, just one performer talking coldly about facts, letters and maps. Around her there are objects displayed in an exhibition that can be visited after the performance. In this way, the signs of time will gradually link to each other and to all the onlookers as history do not transmit only via stories and images but also via gestures, ways of talking, objects, movements and bodies. It’s an invisible heritage beyond individual differences.

The impersonal biography grounds the text by reconsidering the representational aspect of writing compared to cartography. In the show, a sentence is not different to a piece of a map. Therefore, the text moves from personal storytelling to the mapping of territories. And yet, the text exceed human convictions about representational tools like a border line by taking into account one of the oldest map in the world; the one of the stars. Astrological insights lead the text to a wider cartographic consideration reducing human actions and convictions by silently comparing them to the movement of the stars. In the end, all the elements mingle together in a text that ends up by being a braid.

The set of Rompere il Ghiaccio is an exhibition. The display is made of the remaining of the show, and so objects gain a preponderant role in objectifying reality and truth. They will strengthen the blurriness of what is real and what is fiction. On view, there’re letters among grandfather Enrico and Grandmother Elsa, the Bolted Book by Fortunato Depero and the one by Grandfather Enrico. Filippo Andreatta will also realize a third Bolted Book with a mountain engraved within the pages and it will be included in the exhibition. A series of maps will be displayed ranging from the local glacier to the stars, from the confinement town in South of Italy to the hometown of Rovereto in the Alps. Further archive materials like photos, documents and several other materials will be on view to the audience after the show.

The programme will take place in the Sad Janka Kráľa (the stage from the SNP Bridge side).

Founded in 2008, OHT [Office for a Human Theatre] is the research studio of theatre-maker and curator Filippo Andreatta, whose work deals with landscape and personal politics subtly addressed in public and private space.

OHT has collaborated nationally and internationally with, among others, the Haydn Foundation (IT), NYC Artists’ Salon (USA), Romaeuropa festival (IT), Triennale Teatro Milano (IT), the Josef and Anni Albers Foundation (USA), Whitechapel Gallery London (UK), Teatro della Tosse Genova (IT), Istituto Italiano di Cultura di Vienna (AT) and MAXXI museo delle arti del XXI secolo Roma (IT). Finally, Centrale Fies has often been a partner in various projects, both for productions and debuts.