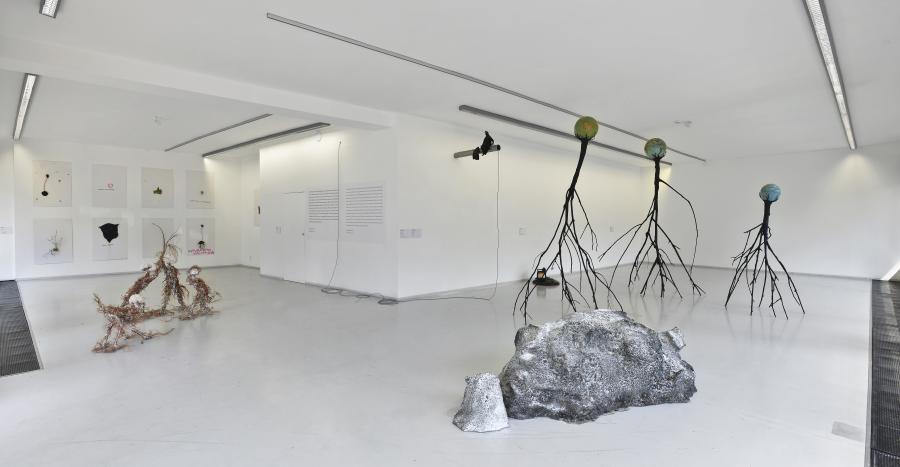 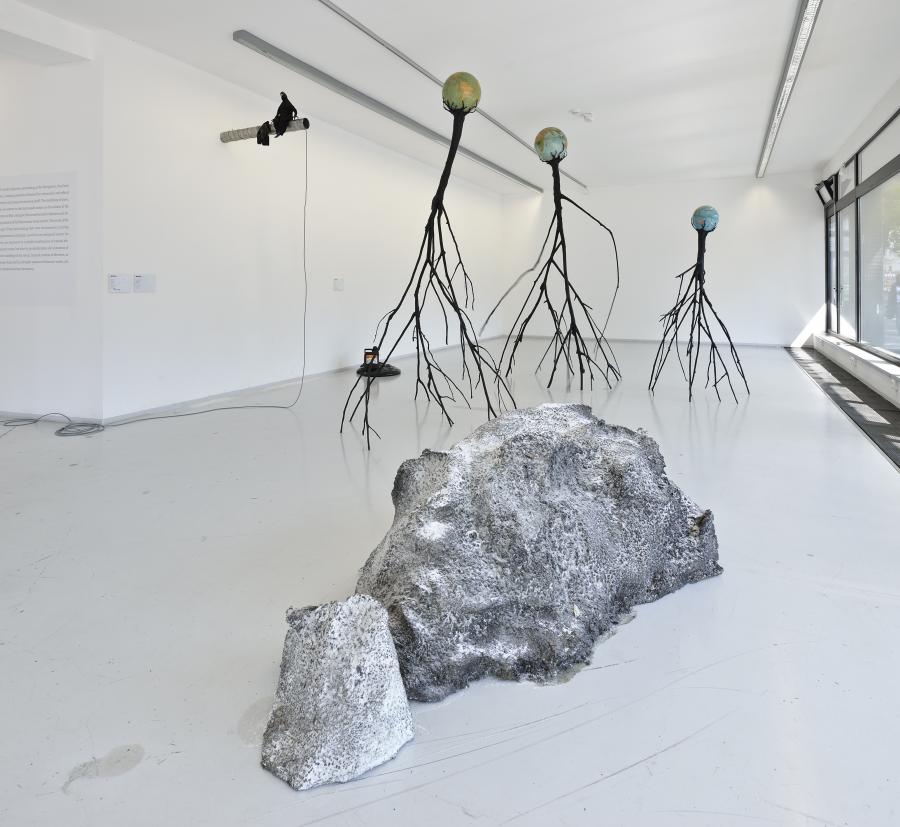 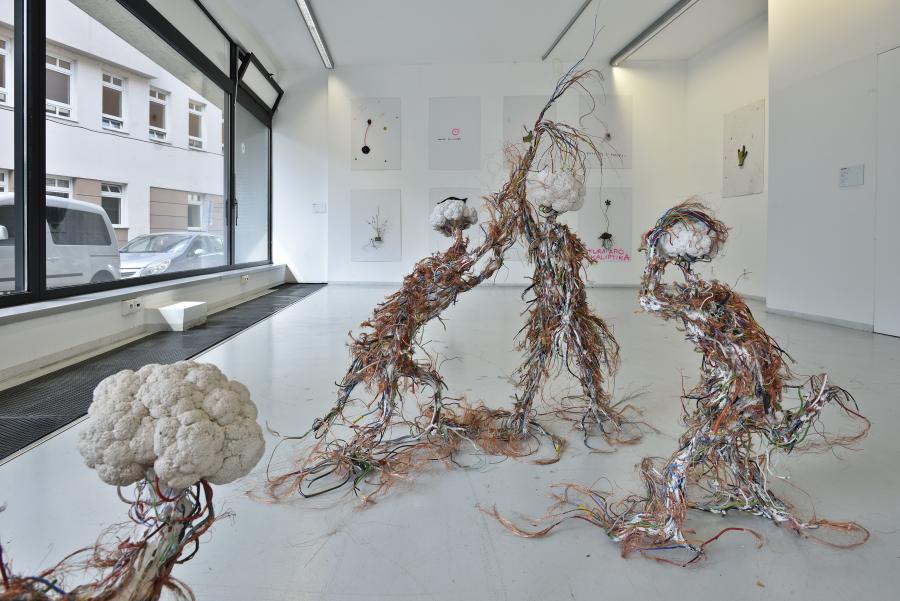 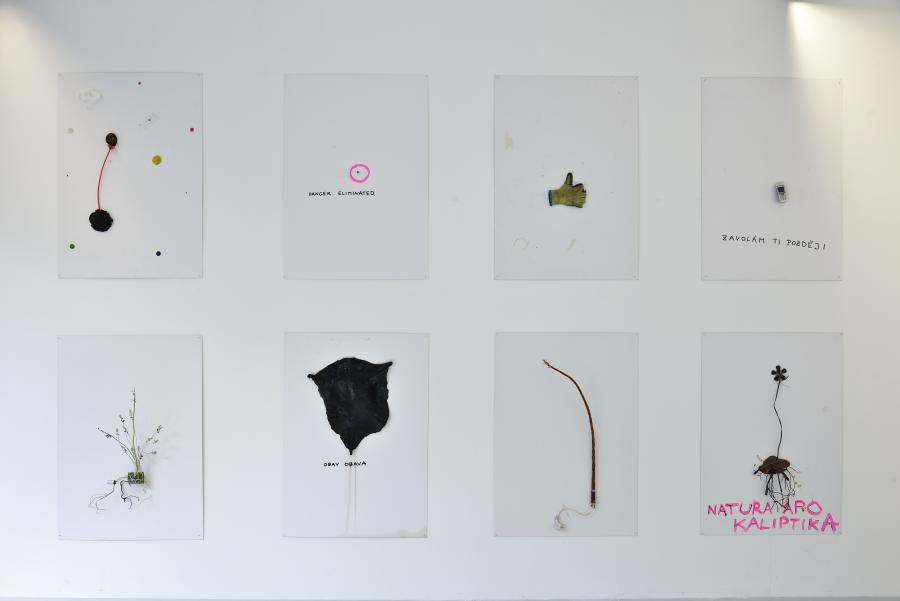 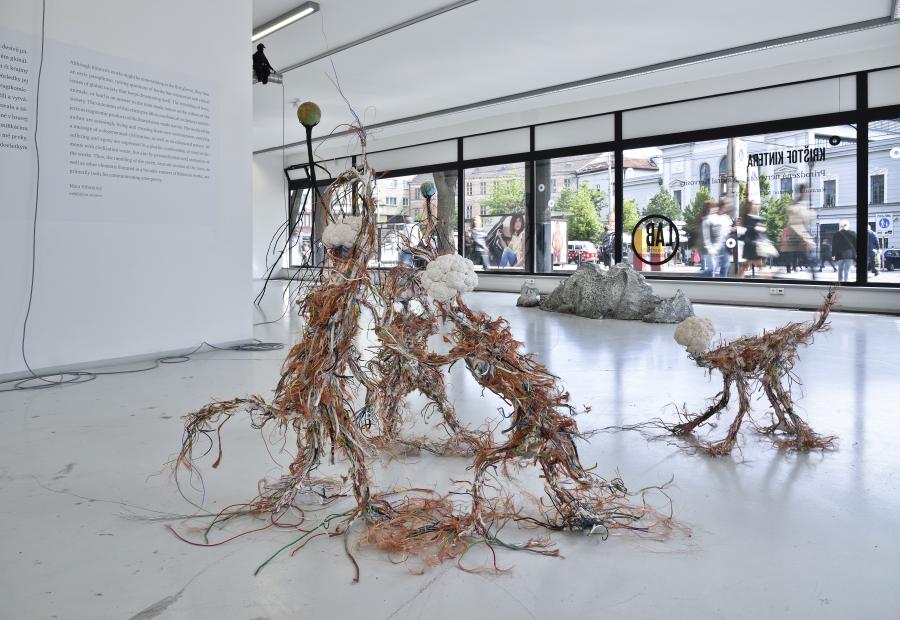 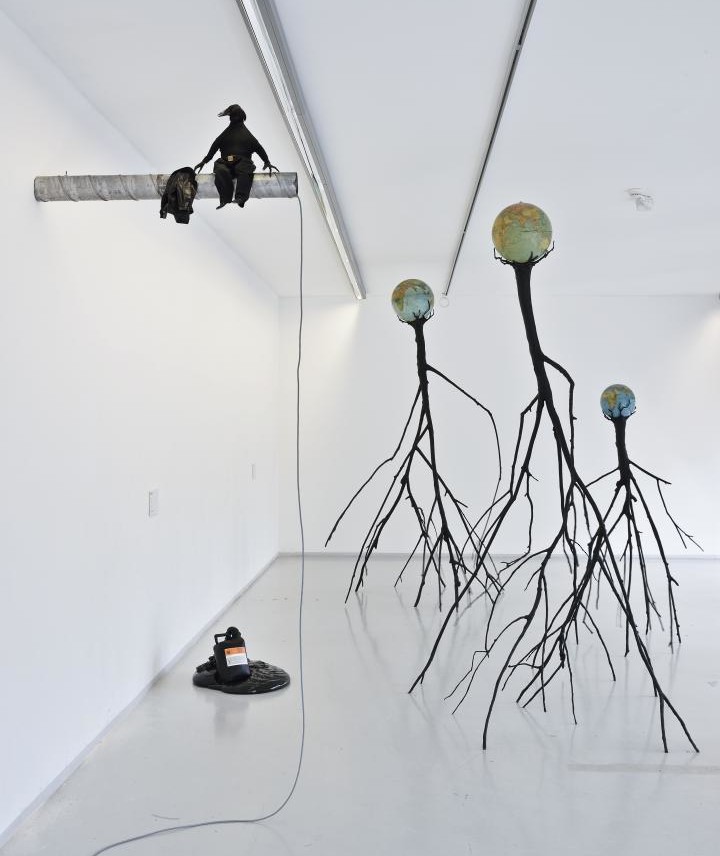 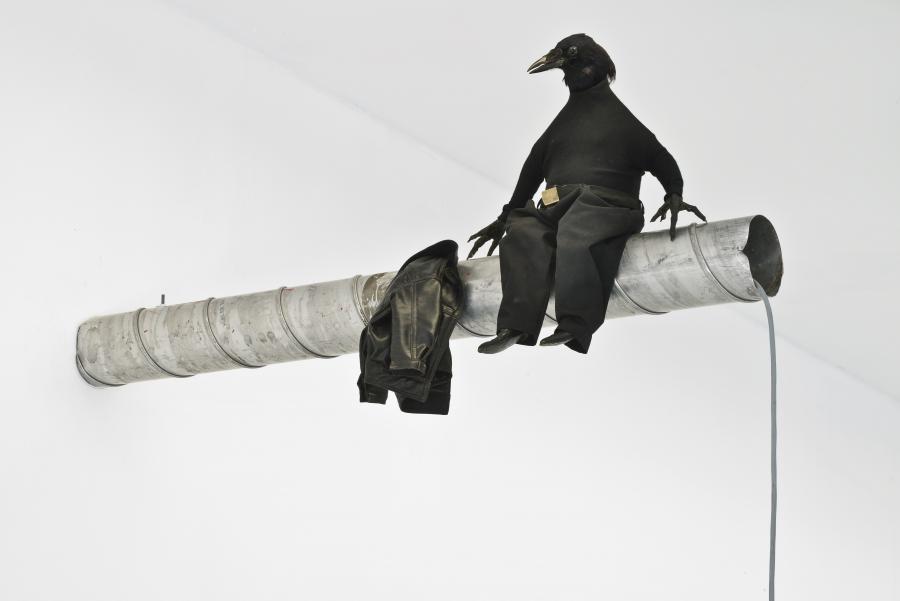 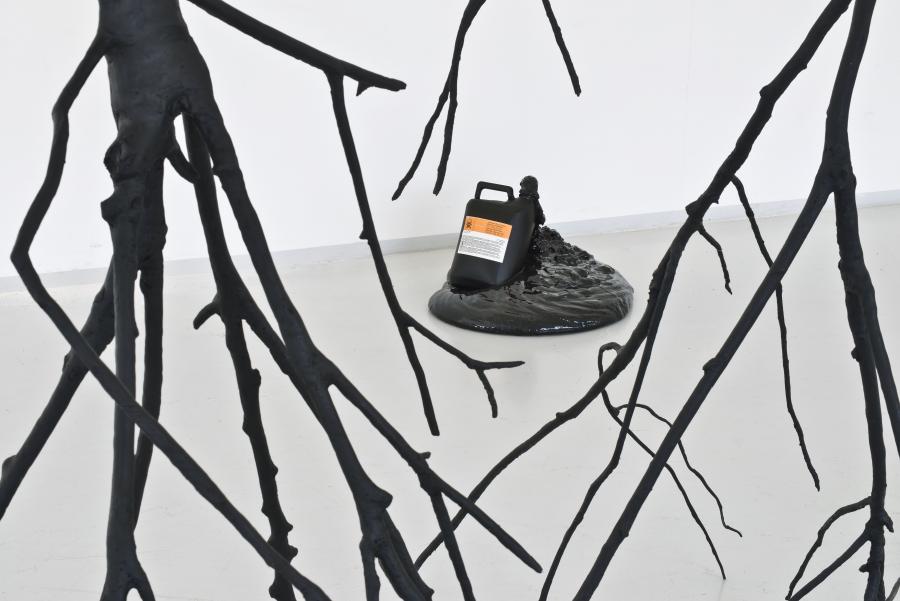 The solo show of Krištof Kintera (*1973), a renowned Czech sculptor of younger middle generation, held in the premises of Kunsthalle LAB presents his works created during the past seven years. The selection of exhibits aspires to present one of the core lines of his current sculptural work, reflecting on the phenomenon of global nature as damaged, modified, and fatally precarious. In Kintera’s works, the state of nature and the Earth approached from the perspective of ecology in times when the Euro-American society, politics, but also science (do not) tackle the issues of devastation, pollution, and considerably boundless depletion of our ecosystem (probably the most by chemical and arms industry) turn surreally into an absurd metaphor with uplifting elements of light-hearted humor.

The aesthetics and the style of his works are complex, following the line of American neo-pop art on one hand, but also encoding elements of neo-conceptualism with a significant influence of kinetic art. The author does not perceive sculpture as a 3D copy of aspects of a disrupted and biased reality, but rather as a metaphor of man as an inherent part of nature. The relation of Kintera’s work to the notion and tradition of sculpture could be called postmodern, as it is ironizing and transforming. In his concept, static changes into moving, inanimate becomes anthropomorphic, objects turn into figures, natural elements are highlighted as part of human sphere, and vice versa. For the sake of communication, everything is somehow out of the norm or balance of general perception. The author does not source his materials primarily from the sphere of art, but rather from the excess of the overtechnical civilization, which he (re)designs and comments on in a very apt way.

The broader scope of contemporary sculpture may even feature smoke, wind, or motion, and thus serve as a formal “pedestal” for the volatile state of the world governed by the paradox of affluence, consumerism, and entertainment on one hand, and devastated environment as well as the overall deterioration and crisis of culture on the other. Kintera creates works that are apparent and attractive carriers of this shameful paradox, which he articulates as a short or denervation, as these stem from an equally stressed environment of the globally disrupted nature. The author uses technical waste as the equipment of civilization overproduction to construct often bizarre or even surreal “beings”. Thus, the entertaining and often absurd forms of sculptures and objects materialize the typical inner disintegration and restlessness of today.

The uprooted tree skeletons with globes in place of heads tremble in nervous jerks to encode a visual paradox of wiry human figures symbolizing nature’s agony (the series Nervous Trees, 2013). The expressivity of the seemingly banal form blends with the fine mechanism of machines or robots that sets the works into ostentatious trance. Furthermore, the sculptures of “dogs” with bodies composed of tightly woven system of electrical wires are no less dynamic or expressive. Instead of heads, they carry vegetable; the cauliflower evokes brain, but also an atomic explosion (the series Evolution Revision, 2015). Thus, the author presents certain “post-apocalyptic creatures” as tragicomic products of the ravaged man-made nature in agony. Even the piles of snow preserved by urban smog are left to live their own lives (the series Disappearing, 2013).

The series of Kintera’s recent works includes a talking raven dressed in black as a certain humanized prophet – a sorcerer commenting upon the “general affairs” (the object I see I see I see, 2009). His rapped laconic remarks such as “I see a problem, I see a big problem”, “I see no future”, or “Time is money” are mixed with contemporary media slogans “Just do it, baby”, “Google Jesus”, or “Big value”, indicating the current state of society, its anxiety and integral decay, as well as a pretty ramshackle vision of the future. In the context of the exhibition, the raven becomes a spectator, commentator, and foremost an obscure prophet; a passive leader grumbling upon everything from the comfort and security of his elevated twig, instead of commencing an action to improve the situation. Thus, the raven is a metaphor of man and society, which seemingly reflects on and analyzes contemporary issues, but usually leaves them unresolved due to its lax character.

Although Kintera’s works might be entertaining at the first glance, they bear an eerie paraphrase, raising questions of borderline existential and ethical issues of global society that keeps devastating itself. The trembling of trees, animals, or land is an answer to the man-made nature as the culture of the society. The outcomes of this crisis give life to mechanical sculptures and objects as tragicomic products of the flawed man-made nature. The works of the author are seemingly living and creating their own environment, carrying a message of a degenerated civilization, as well as an exhausted nature. Its suffering and agony are expressed in a playful combination of natural elements with civilization waste, but also by personification and animation of the works. Thus, the rambling of the raven, neurotic motion of the trees, as well as other elements featured in a broader context of Kintera’s works, are primarily tools for communicating emergency.