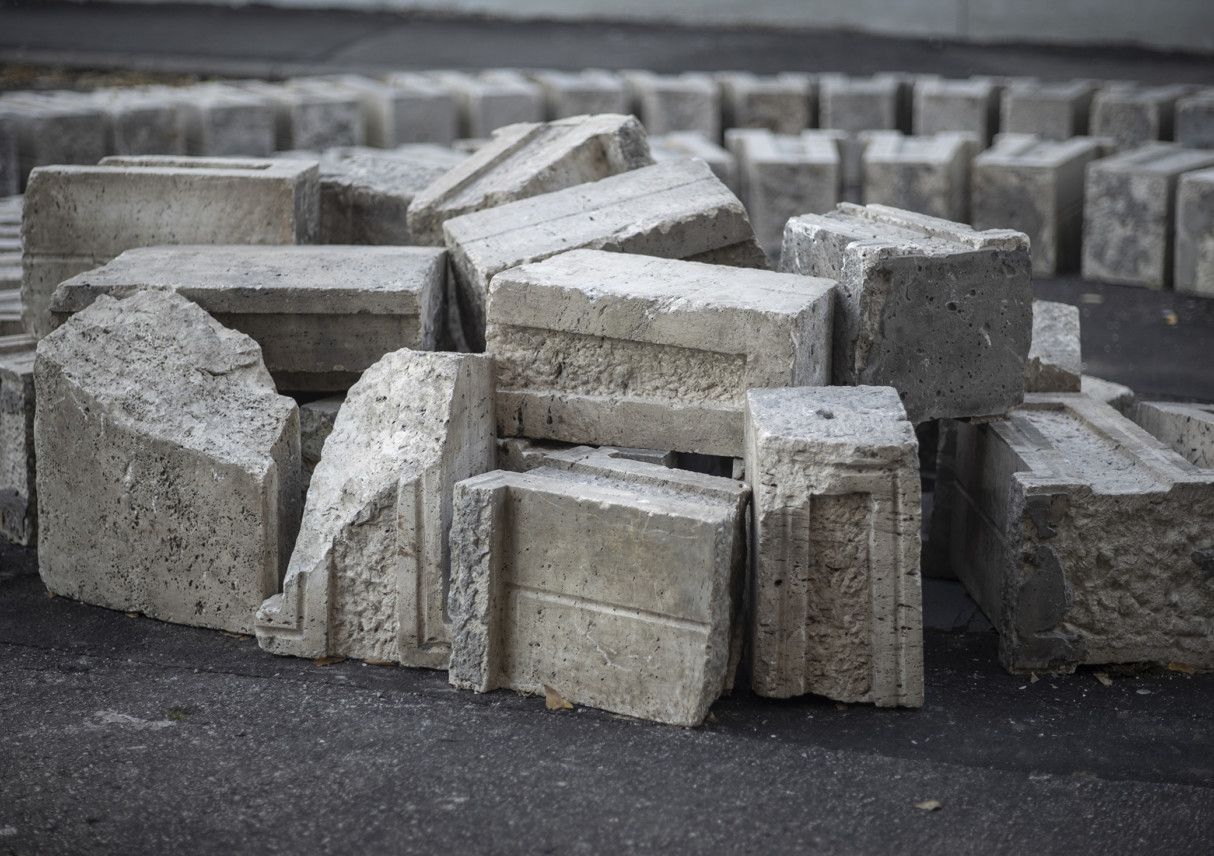 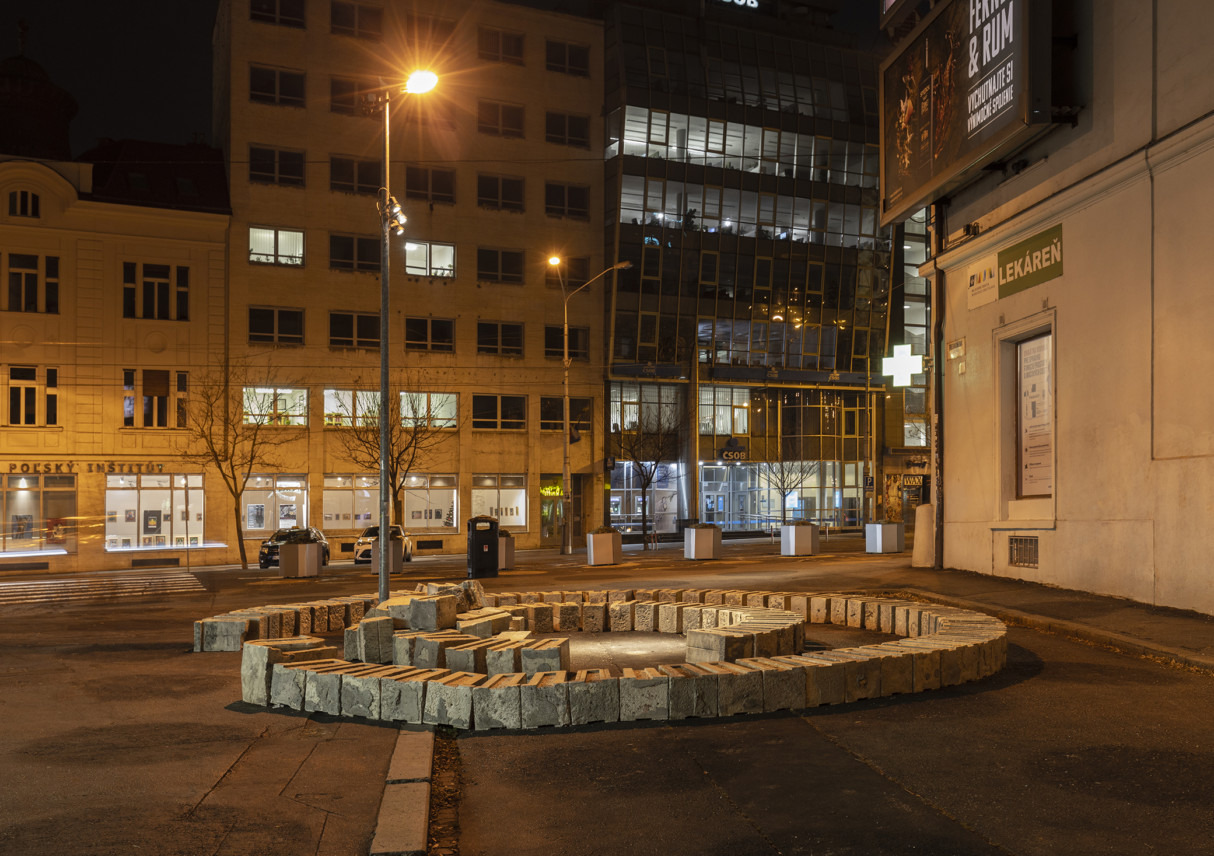 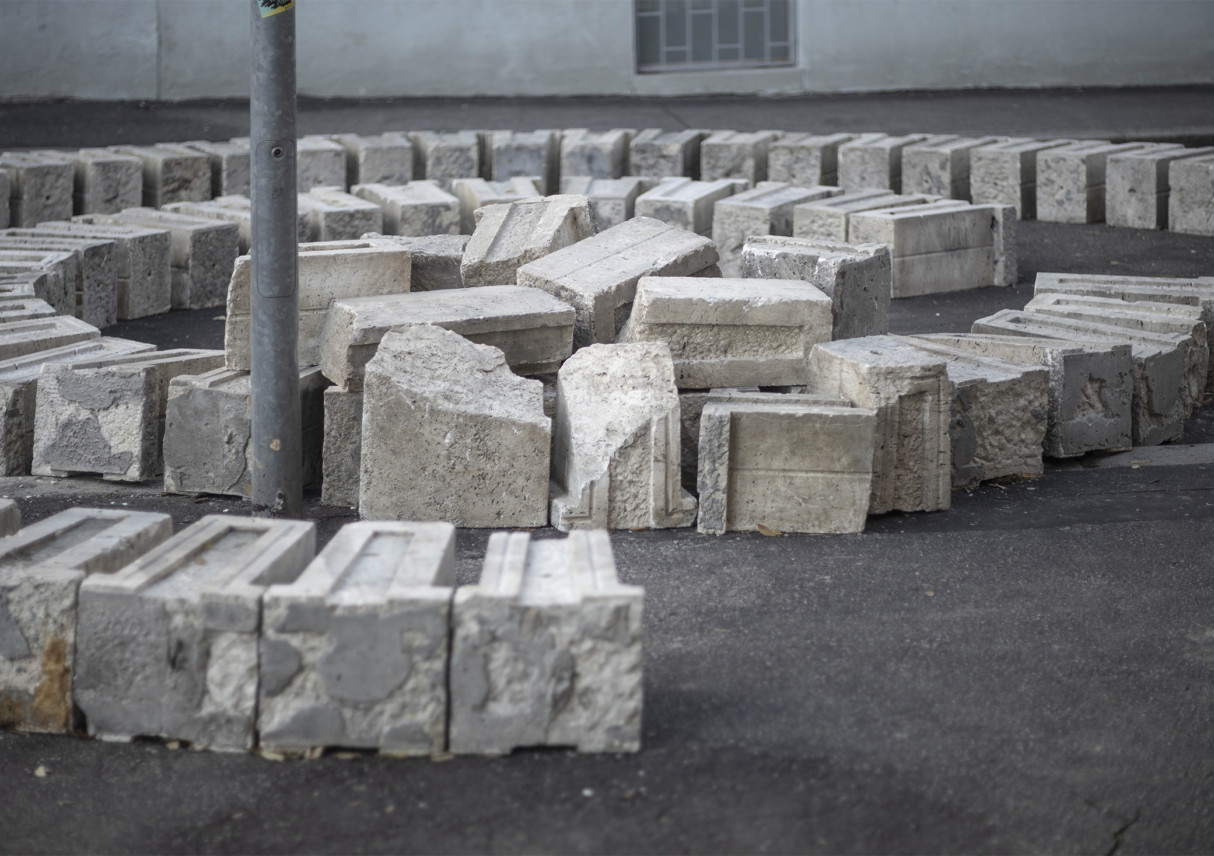 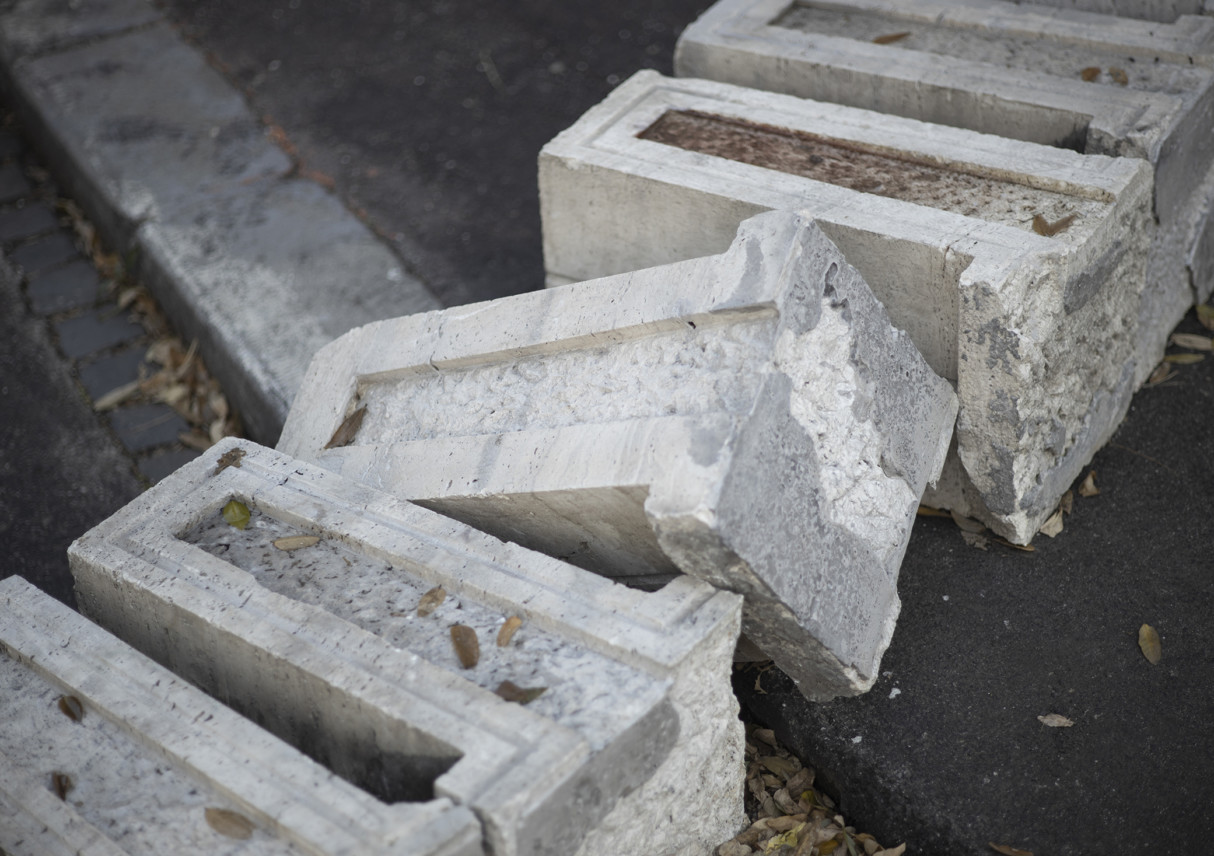 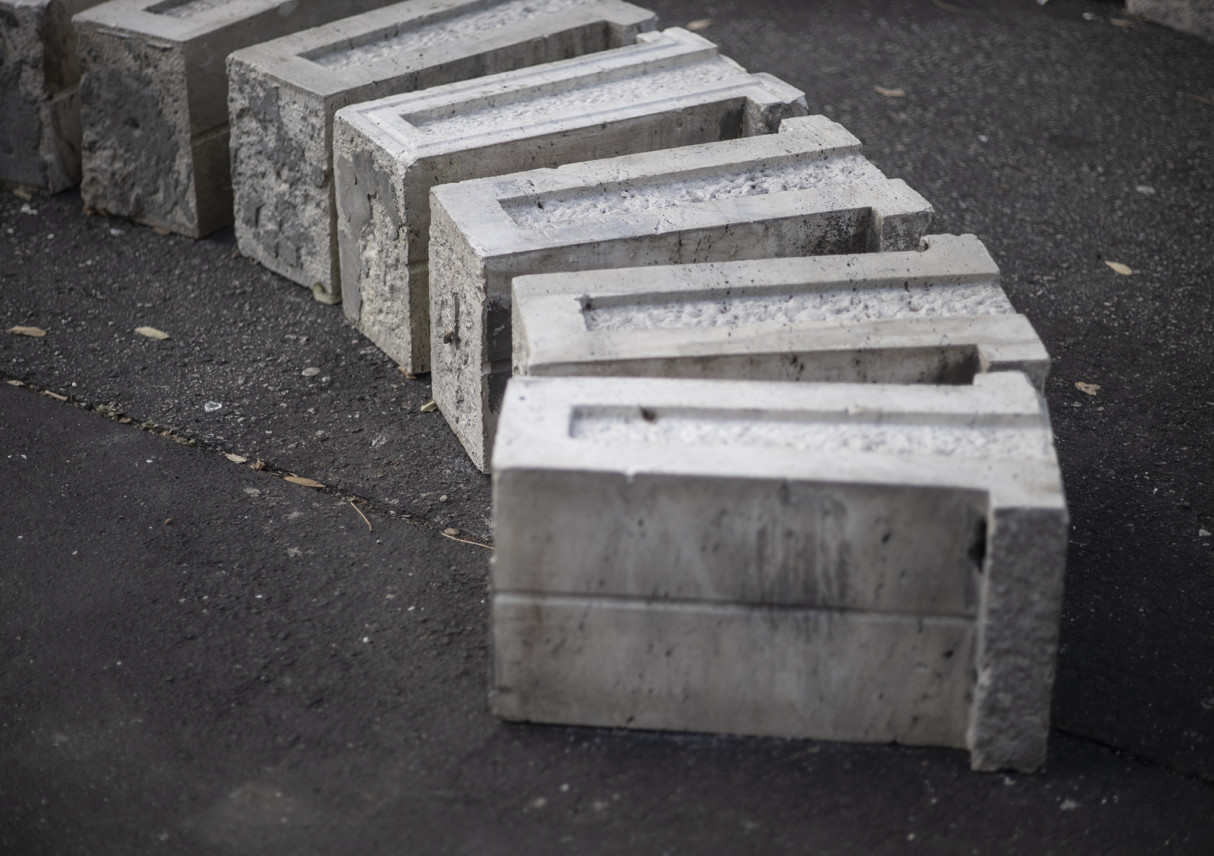 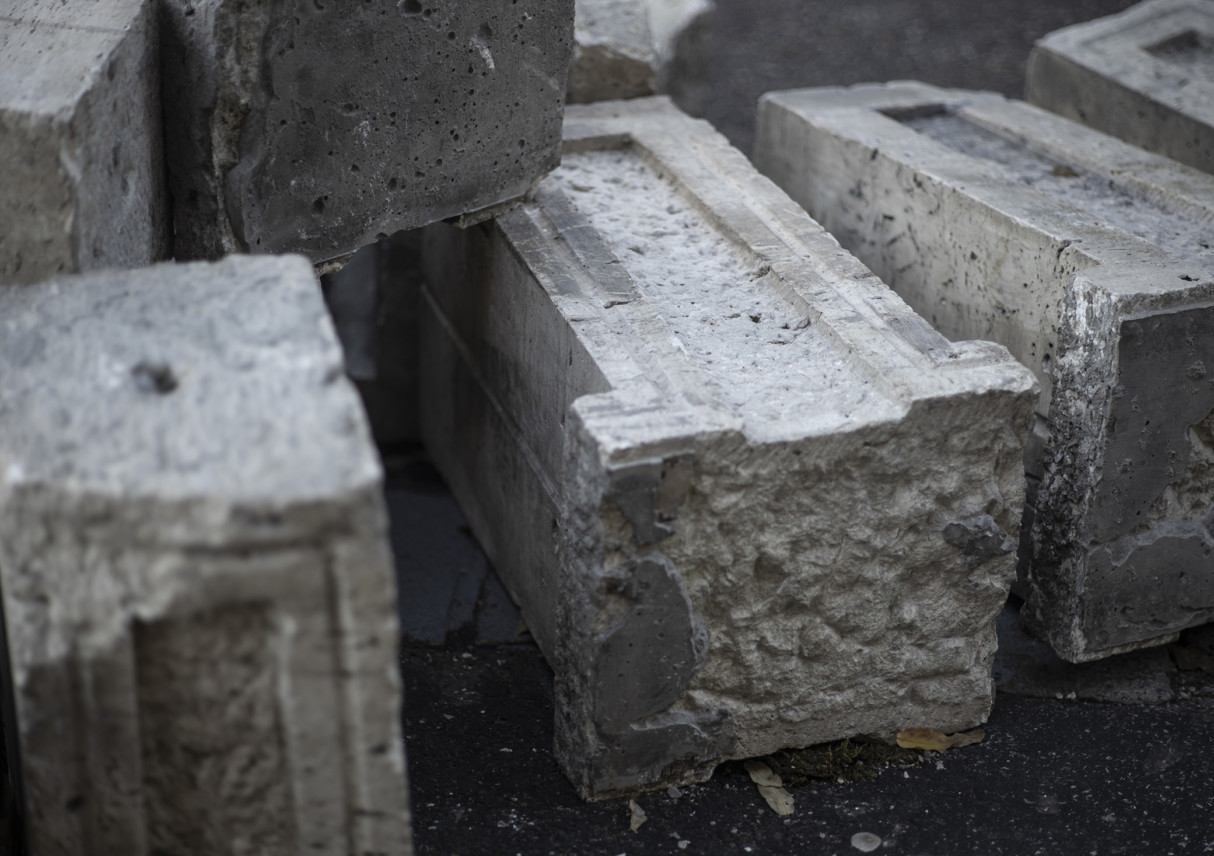 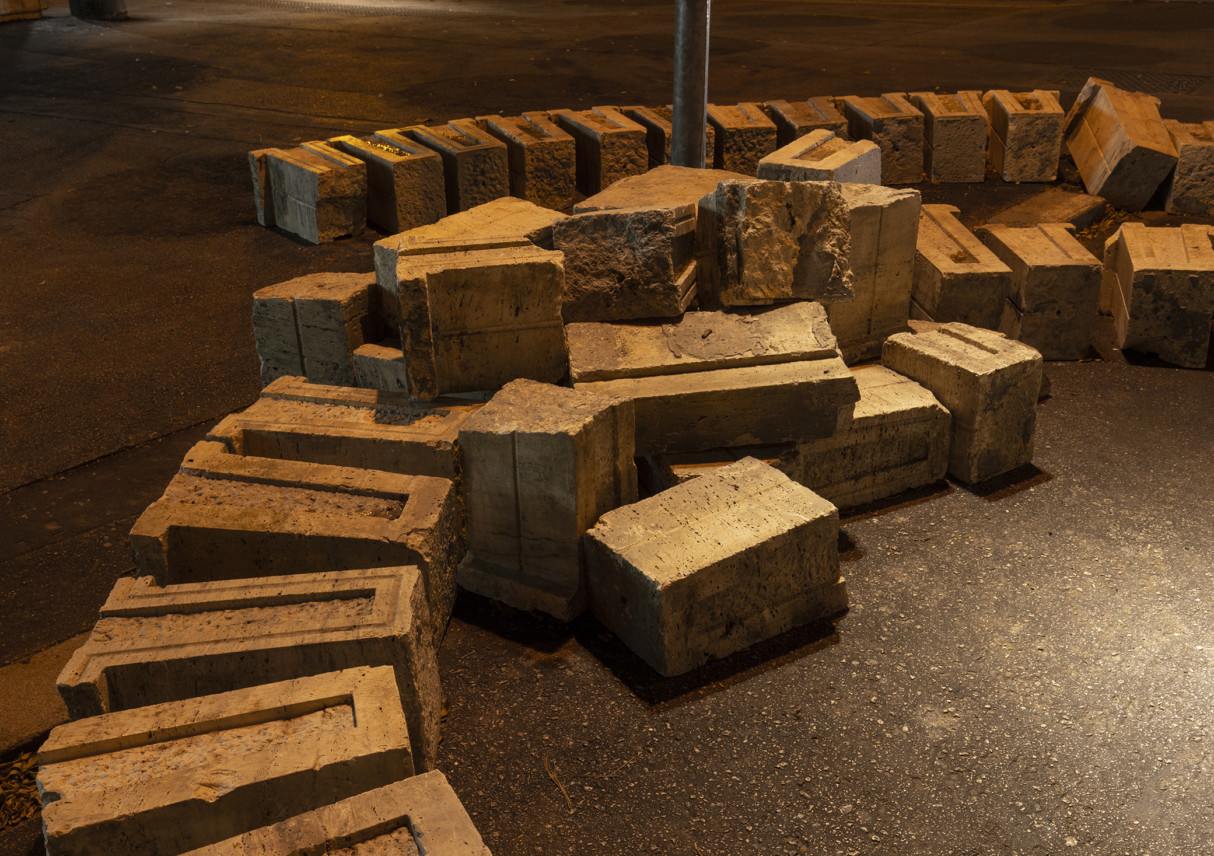 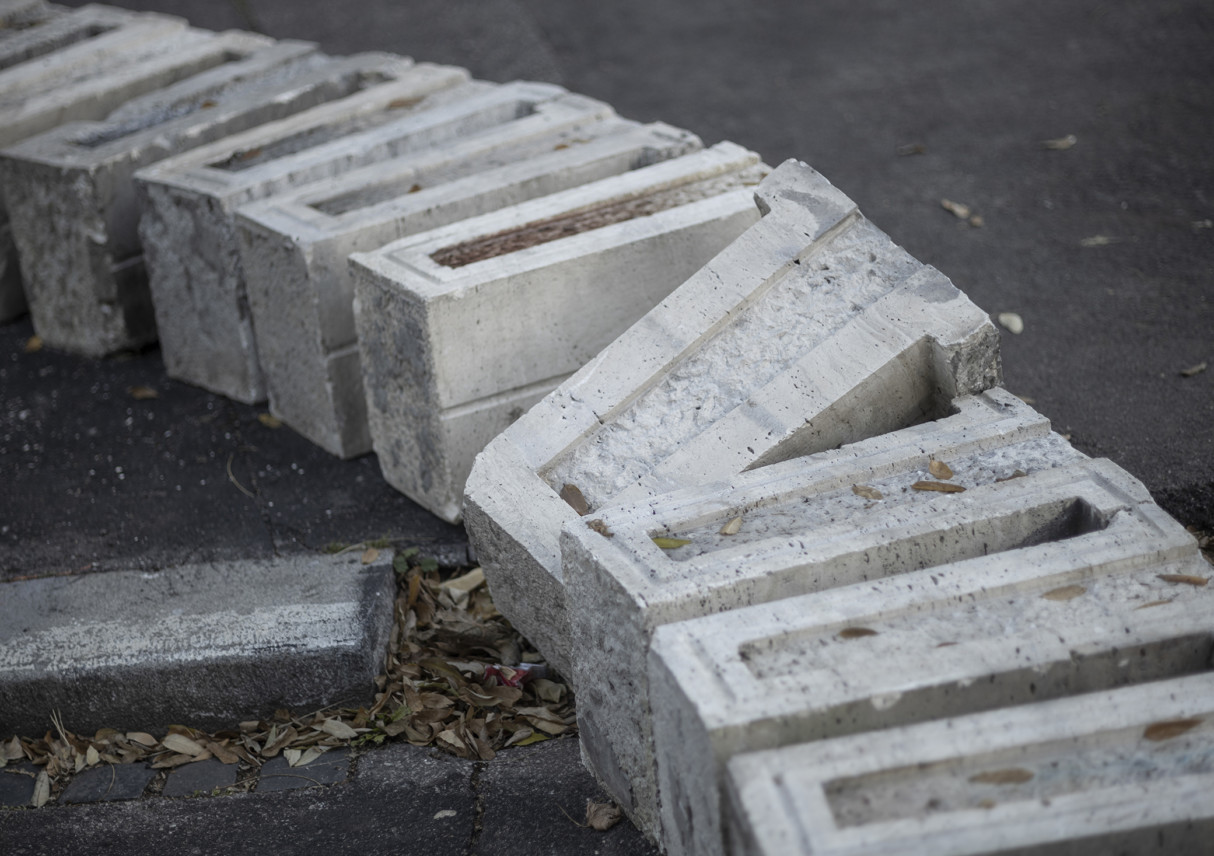 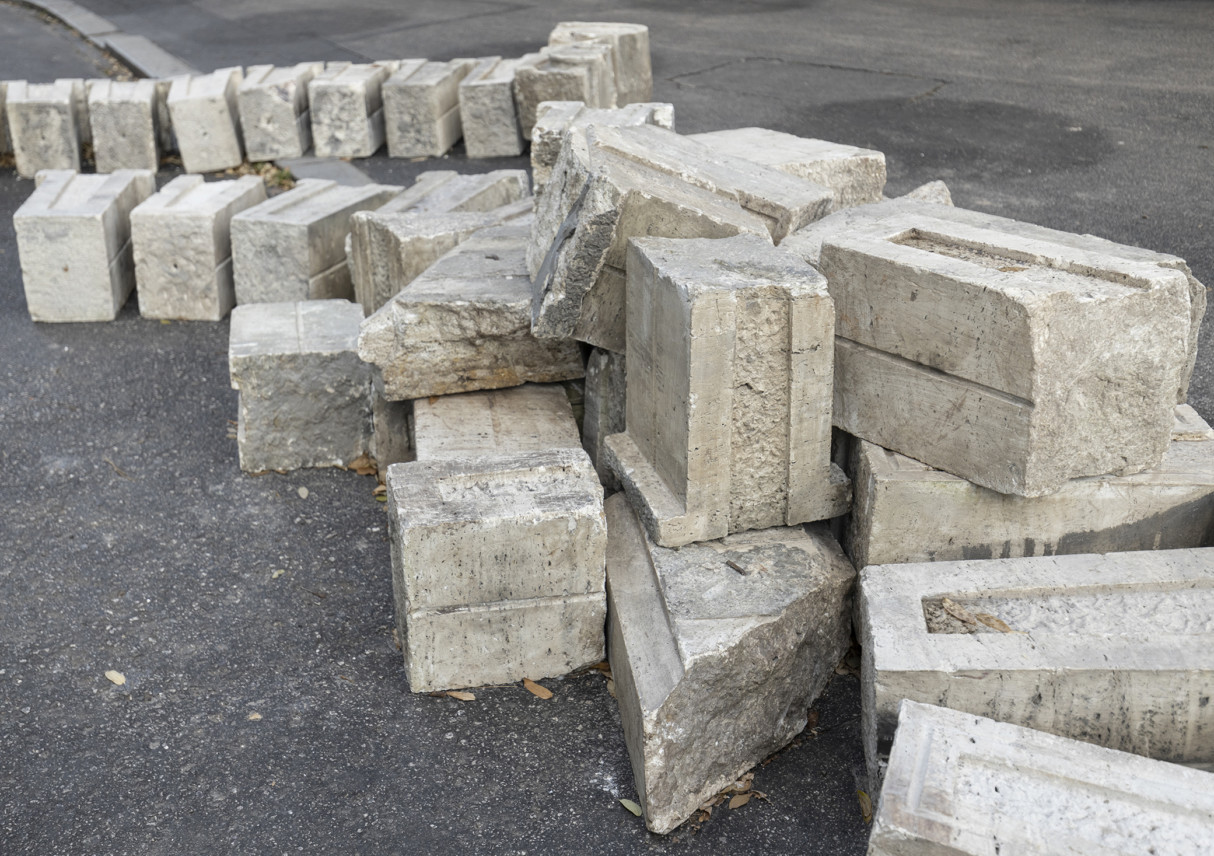 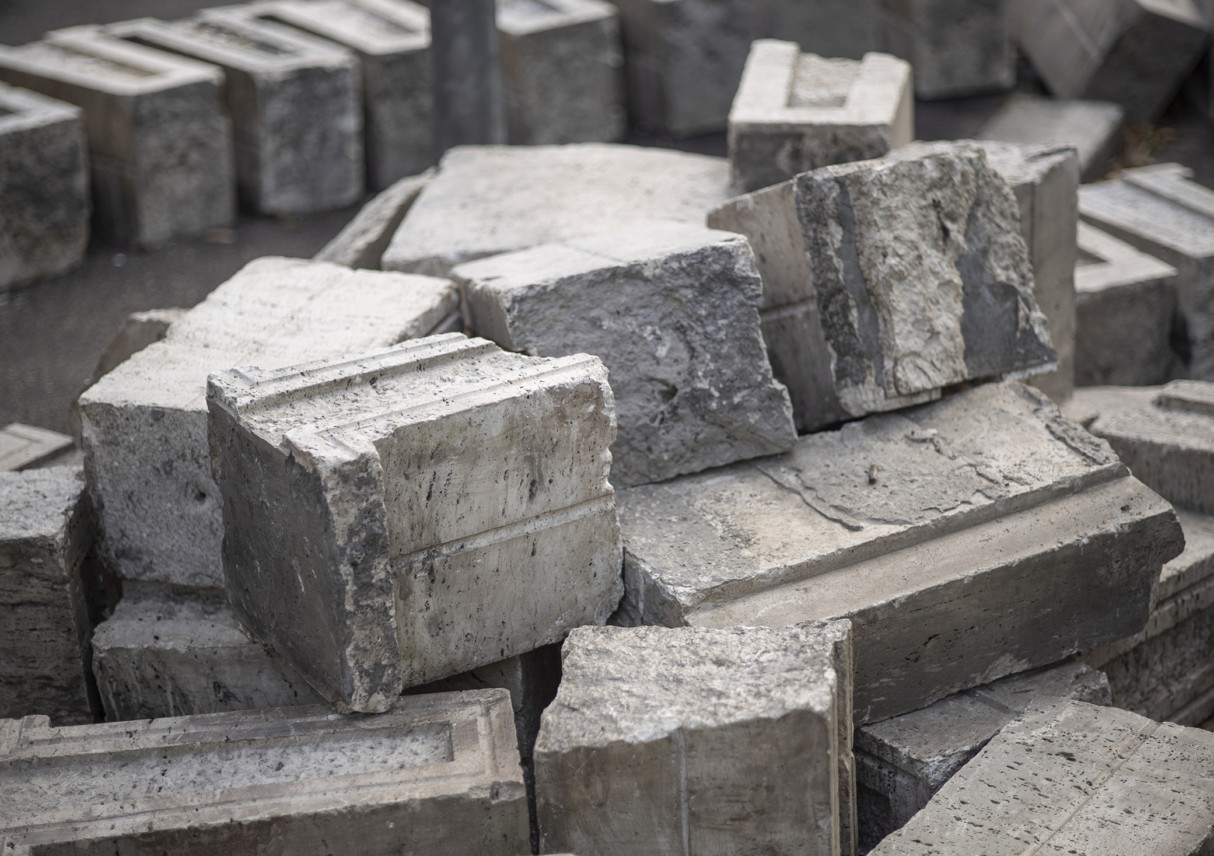 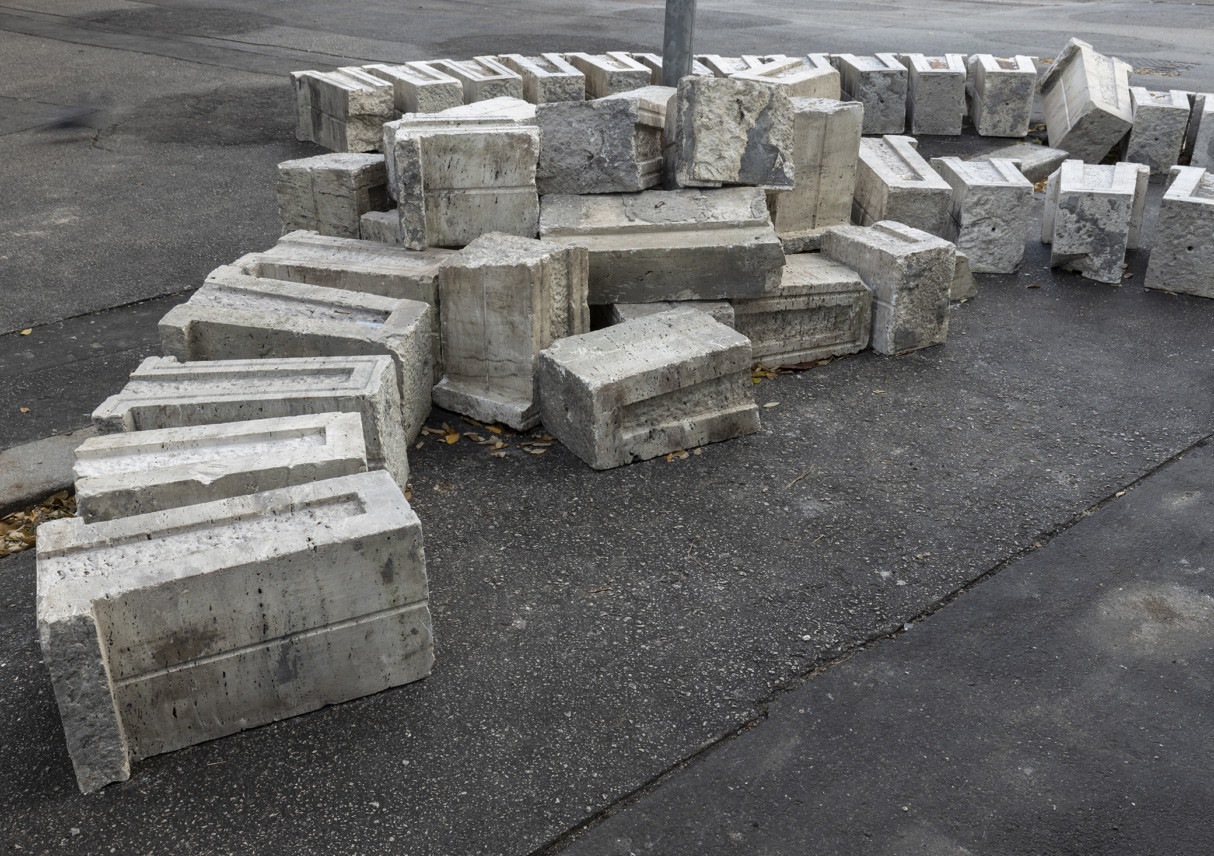 Along Treskoňova Street in front of Kunsthalle Bratislava, Matej Gavula (*1972) has installed Promenade, a temporary work constructed with stone elements from the banks of the Danube in Bratislava,[1] specifically from pieces of “Matušík’s Wall,” a traditional destination which for local residents represents an iconic element of the Danube promenade. The light porous travertine from the Spišský Dreveník region[2] evokes an almost Mediterranean summer holiday atmosphere. The wall, which stretches from SNP Bridge all the way to the Botanical Garden, is the work of Ivan Matušík and Ivan Salay. It was built in 1958, the same year that construction was begun on the House of Arts, which today houses Kunsthalle Bratislava and whose main facade is also clad in travertine. The repetitive elements of the minimalistically simple wall, which bears several characteristics of classical architecture (base, column with a hint of fluting, entablature), were hand-carved, making each an original. They are characterized by an inspired grandiosity, sense of proportion, pure form, and sophisticated detail. The architects lightened this physical and visually solid boundary by inserting regularly spaced, curved viewing terraces with metal railings.[3] Part of the wall was removed during construction of the River Park development and implementation of flood protection measures in the early 21st century – replaced by a solid concrete barrier whose height and form, though designed to protect the city from a thousand-year flood, currently prevent any more direct contact between pedestrians on the promenade and the river.[4]

Throughout the 19th and 20th centuries, attempts were made at giving the riverbank a uniform urbanist and architectural look and connecting it with the city center. Nevertheless, to this date, the Danube embankment’s planning and management has been approached in a distinctly piecemeal manner lacking a comprehensive vision. As described in the book Bratislava (un)planned city, fragmentary interventions have caused the area to fall into disrepair. Until the last century, the embankment thus remained a “privileged site of identity, of encounter between present and past,” and also one of the city’s last urban “redoubt[s] in which to exercise the liberty of the individual or the small group.”[5]

When he looks at this important work of sculptural architecture in its original location along the Danube, Matej Gavula sees it as a kinetic work that (if one passes by quickly in a car or on a bicycle) produces a stroboscopic effect thanks to the rhythmic flashes of the vertical slits in the wall. This hypnotic movement reminds him of the Bratislava native Rudolf von Laban (1879–1958), the legendary avant-garde dancer, choreographer, teacher, and dance/movement theorist who was born right on the river’s embankment.[6] Gavula arranged the travertine stones from the riverfront into circles on the basis of the round dances[7]that interested Laban, in which an important role is played by the concepts of collectivity and sharing that were so important in his lifelong work.[8] According to Gavula, the circular arrangement of the travertine pieces is also a reference to defensive walls or to the Roman art of war, a perfect military strategy based on a ringed circular defense. Installed as it is by Kunsthalle Bratislava in the city center, it can be seen as a metaphorical defense against gentrification and ignoring history.

These circles are complemented by a pile of randomly placed fragments in reference to the state in which these historical architectural elements spent years lying at the Čierny les (“Black Forest”) landfill on the outskirts of Bratislava. This is also where Gavula shot his short film, a mixture of documentary and fiction titled Promenade in the Black Forest (November 2021), in which he recorded the state of the travertine pieces from the dismantled promenade section just before their installation in front of Kunsthalle Bratislava. Until recently, the travertine blocks were hibernating amidst the melancholy post-historical scenery of Čierny les: randomly tossed away, many of them broken and fragmented, overgrown by weeds and shrubbery – exactly as they had been dumped there after being removed from the riverbank. Nevertheless, the more preserved stone elements from the promenade were recently (November 2021) – and perhaps partly thanks to our interest – inventoried, cleaned, and stored in neat blocks. We were given a tour of the site by one of the video’s main protagonists, the caretaker Mr. Belko. At the entrance to the site are several container-like stables for a planned environmental grazing project slated to begin next year on grass-covered municipal lands. The animals can even be seen in the video, hopping along the broken stones that could no longer be saved. The soft and bushy backs of the sheep in the video are like an echo of the travertine volutes from the riverfront. The footage radiates an ambivalent bucolic-dystopian post-Anthropocene atmosphere that fluctuates between the unfettered frolicking of the goats and chilling images of the broken travertine.

Travertine is a sedimentary stone characterized by a porous structure, formed by the slow settling of sedimentary layers – a little like layers of memory that are constantly being covered over and preserved. Gavula’s work explores the flowing of time, forgetting, and amnesia, but it is also about power. Its central concepts are historical context, public space, reflection, recycling, and transformation Promenade raises questions of public space in Bratislava, drawing attention to its privatization, to projects without any clear vision, and to problematic interventions. It seeks to sensitize the public’s relationship the architecture of the city, to its heritage and its history.

[1] The promenade along the left bank of the Danube was built as part the river’s regulation, which was begun in the late 19th century by Bratislava’s mayor Heinrich Justi. From around Coronation Hill (Korunovačný vŕšok), it was gradually extended to the west. The promenade’s oldest segment can be already be seen on a map from the year 1894, while its westward expansion was done in association with the river’s further regulation in the 1940s. Nevertheless, this newer section of the promenade, built to connect the historical city center with the new Park of Culture and Leisure, was not given its current architectural form until after the Second World War. See Henrieta Moravčíková, “Dunajská promenáda,” Arch 14, no. 3 (2009): p. 36.

[2] The travertine on the former Prior department store on Kamenné námestie, which like the wall was designed by Ivan Matušík, has the same origin.

Closely related to the wall’s removal along the River Park development are several other problematic alterations, such as the relocation of Dušan Jurkovič’s sculpture to an intersection, where it is in the company of, among other things, several advertisements and a public toilet. Zoja Droppová, email correspondence from 11 November 2021. Droppová also calls attention to the wall’s evanescence along the Botanical Garden and to several initiatives to save the wall.

[7] The round (German: Reigen) is an ancient dance form that to this day can be found all over the world. Laban used the term “round dance” in multiple meanings: either to describe an entire work (Reigenwerk) or a part thereof (Reigen). In Promenade, Matej Gavula has arranged the stones in two circles, perhaps in reference to Laban’s most successful dance work, Narrenspiegel (Fool’s Mirror, premiere: Berlin, 1928), which had two round dances, two acts – a dance of life and a dance of death. See Laban, Život pre tanec, p. 20.

[8] Laban was the first to develop the concept of community dance. He decided to reform the role of dance education, convinced that dance should be accessible to everyone. See https://www.trinitylaban.ac.uk/about-us/history/rudolf-laban/