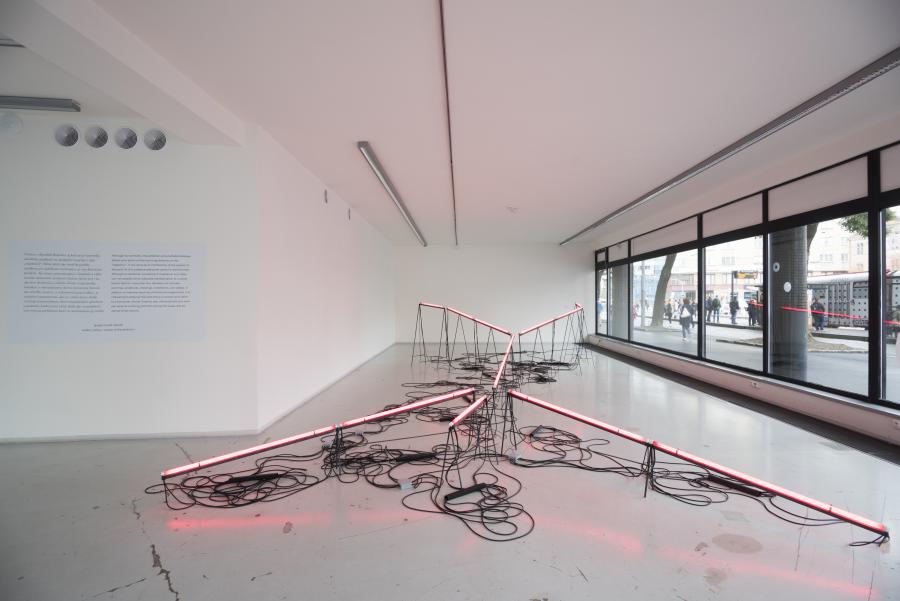 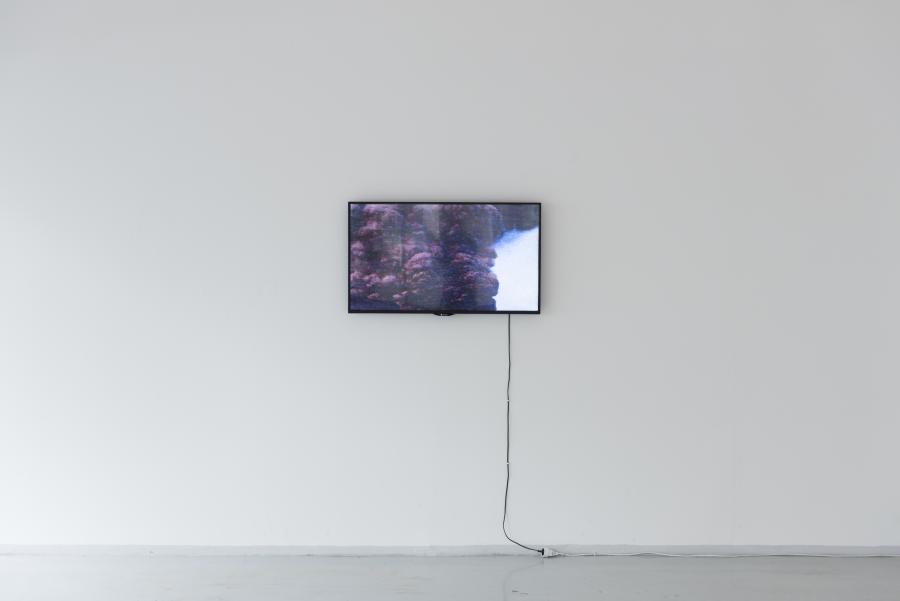 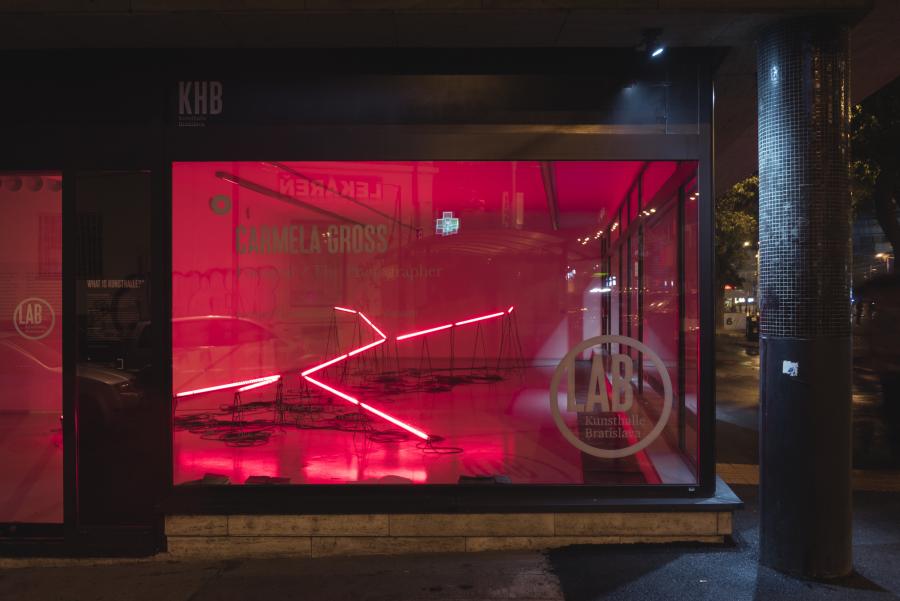 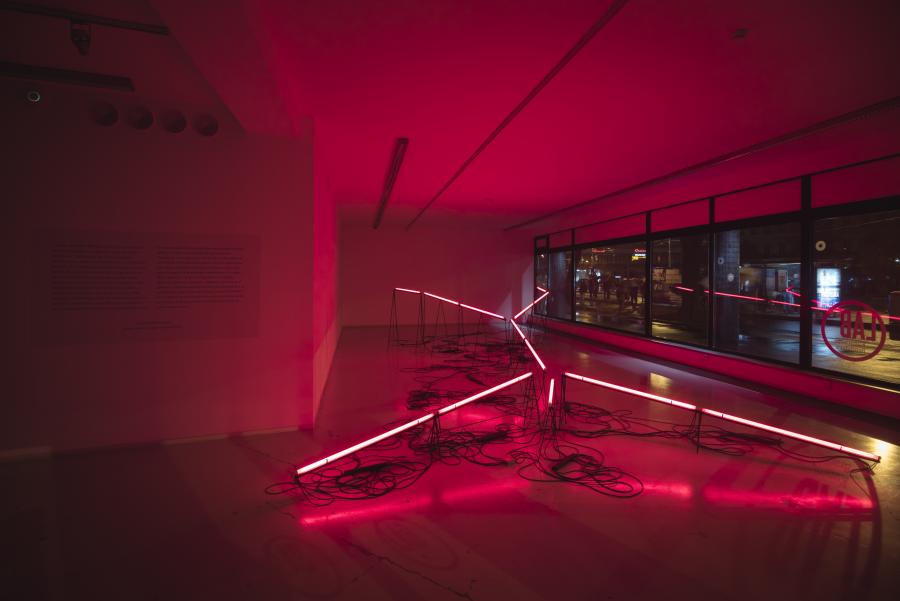 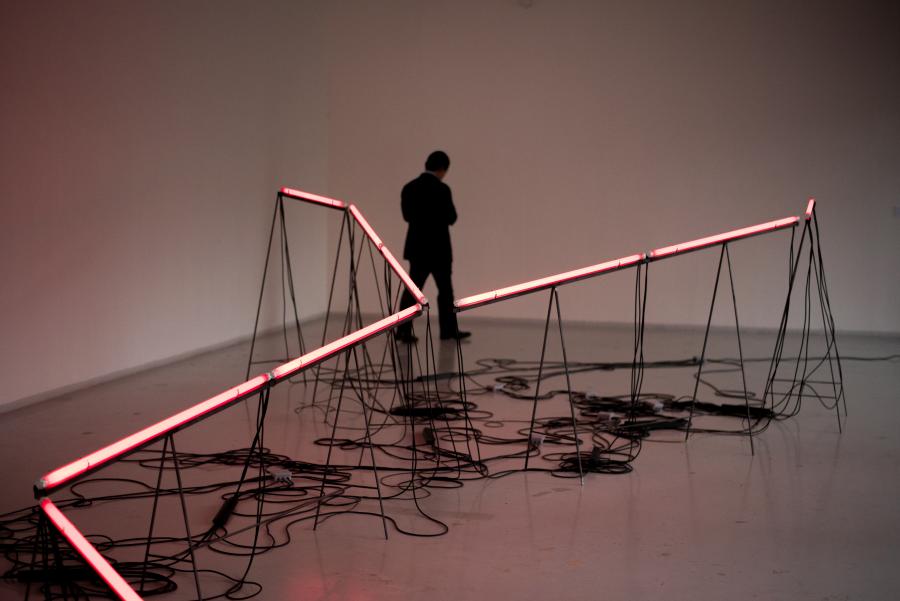 we talk about when elaborating on Carmela Gross

Although not synthetic, the exhibition at Kunsthalle Bratislava allows us to point out the recurring elements of this “trajectory”. It can serve as an introduction to the poetics of the artist for the audience seeing her works for the first time. Although an exhibition consisting of installation and video can not possibly be an adequate representation of a career (which lasts for more than four decades and includes paintings, sculptures, drawings, installations, and videos, in addition to intensive teaching of artists and researchers), it is interesting to observe how everything in Gross’s work refers to a horizontal, almost rhizomic way, and practically any work can serve as a starting point for solving the issues that are central to her oeuvre.

Drawing has been the heart of the Gross’s work from the very beginning, although it may seem like a very contradictory statement, considering the often-used “urban” scale of her work, her physical presence, the political connotations and firmly conceptual foundations. Overall, it means that she departed from her most common practice in the studio in all spheres of her work and resorted to drawing silently as a lonely artist. However, drawing is the starting point of the vast majority of her work: “It is present, it leads me, it is the beginning of any work I do.” The way drawing translates into the final work can be more or less obvious, as she does not follow a unified or recognizable strategy.

This constant stylistic and procedural transformation is possibly what best describes Carmella Gross’s practice over the years. For example, the key work from the dusk of her career (Carimbos, 1978) involved an expression of the subversion of freedom through a primitive artistic gesture, resulting in an almost instinctively created scribbling or stain that she transposed into a stamp and replicated it mechanically: “The artist replaced the sensual and manual gesture by mechanized stamping in a serial stroke.”

Several years later (in 2005), Gross returned to drawing during the project Cascata, creating a staircase on the banks of the river Guaíba in Porto Alegre (an urban project that is permanent and designed to go unnoticed as artwork). In the project description, she explains her intent: “The edge of the stairs was meant to be made of iron, CORTEN steel or other material, so that it would be overlooked to clearly define the drawing lines.”

In O fotógrafo, she used the same principle to illustrate the process of drawing. On the one hand, the lamps representing the basic unit of drawing give the whole work an almost childish schematic, elementary character. On the other hand, just like with the stamps, this simple gesture, along with the preservation of its spontaneity, is transformed and subverted by becoming mechanical, even industrial, as it is captured with a lot of cables, transformers, reactors, energy, etc.

Exhibiting cables and other functional elements is especially important in terms of saving work, because it allows us to place O fotógrafo in a set of Gross’s works that are in a direct or indirect osmotic relationship with the city. Some works, usually those of large dimensions, such as the Cascata or the illuminated sign Hotel designed for the 25th Biennial in São Paulo (2002), connect with the city and are often open to the audience, engaging interaction.

According to the artist, for instance the work a Negra (1997), though almost intangible due to the method of layering the fabric, is “the object of iron and black nylon tulle, armed with wheels for traveling on the roads, on asphalt. I also see it as an object image that mixes the movement of streets, cars, sounds, building lights, shops and advertising, but it is still an object of desire that contrasts with the ever-changing city and the passersby – by crossing, turning, walking, coming and going, and returning”.

However, the relation to the urban universe is not limited to the scope and location: some of her other works also feature the urban element, namely the Latin American city with permanently exposed guts (cables, pipes, scaffolding, defective passages) as a direct and explicit raw material, even if they are intended for the theoretically aseptic environment of a museum or gallery. This nature of her objects was also highlighted by her works exhibited at the 10th Biennial in São Paulo, namely A Cargo, Presunto, A Pedra, and Barril(all created in 1969). They were made of raw materials commonly found in the city (mattresses, car covers, barrels, straw, plastics) to point out the peripheral poverty and state violence (especially the barrel, which was often used as a torture tool).

But the work that illustrates the poetic and undeniably political union of the inner and outer, the open and closed, the protected spots and dangerous streets is the essence of Carmella Gross. “The artist is their trajectory,” but the trajectory is also created by breaks and deviations: 2 Buracos (2012), an opening on the facade of the Vermelho Gallery, tautologically based on what the title says: two holes on the facade of the gallery that create visible and almost palpable osmosis with the city. A similar principle defines all of her work. Thus, it would be advisable return to Kunsthalle Bratislava and take another look at the O fotógrafo from the outside the building, from between the vehicles and possibly during a cold, cloudy night, to feel a light breeze that is the energy of the artist, which she likes to call “the urban sign”.

Luz del fuego (2012), the accompanying video to O fotógrafo, was created on its journey through Bratislava and shows newspaper photos of political conflicts, street collisions, and accidents in various parts of the world. Although video is not a medium commonly used by Gross, this work represents a relatively recurring modus operandi in her creation, which utilizes the juxtaposition of words, names, or other elements. Thus, the idea of mechanical repetition is frequently present in her work from the first time she used stamps, although in this case we encounter rather with the utilization of seriality, the construction of the message from the sum of all the elements, and the minimal differences between them that lead the viewer to understand the work as a whole.

We can see the same principle also in Figurantes (2015), where metal planks inspired by the streets feature “former delinquents, crooks, thieves”, and other characters that Marx introduced in his book The Eighteenth Brumaire of Louis Bonaparte (1852). As he says at the beginning of his text, these characters are omnipresent in today’s cities and reoccur just like farces. The presence of words in Gross’s work – repeatedly found in her works since 2000 –  shows her great knowledge of the world of writing, ranging from its more immediate manifestations (Luz del Fuego or Us cara fugiu correndo, 2000) through the most sedentary Marx’s philosophy to the poetry of Machado de Assis (Pensas, Achas, Pode, Gosto, 1996).

O fotógrafo was not inspired by literary references, but years after the first installment of this work, Carmela Gross discovered the excerpt from the classic text Os Sertões (1902) by Euclides da Cunha (1902), which describes the work perfectly through the image of the protagonist: “The sunset was long, the shadow of the sun lingered on the ground and the protected soldier rested with his shoulders open towards the heavens. He’s been resting… for three months…” Maybe it’s just a coincidence, but it’s amazing to see that in the world of Carmella Gross, where everything is constantly transformed and reworked, the contemporary works complement and elucidate the other moments of her trajectory, and that the inspiration for her work appears years after its realization.

…. he needed a free figure in space, needed light, maybe he would need a stand, but he would certainly need color. Everything at once. Everything multiplies, decomposes, merges. He is swiftly moving images that need a beginning. Or a sketch?

A simple thing. A pencil and a paper. Many sketches with no result. My skills were not enough. So I built a stand, not the painting one, but like the one for locksmiths, with thin bars of iron, reinforced and welded, without precise measurement and technique. Urgently created “outline”. A red fluorescent lamp was mounted and connected to the central beam of the stand, fastened with clamps. The bright light of the lamp made the legs of the stand almost invisible, which provoked the feeling of suspension that caught my interest.

The image of the isolated stand and the industrial lamp sparked the thought that the figure in question should be made in parts – possibly dotted. Man – track – light. There is only a direct visual experience with the iron stand, gas lamps, a few meters of wire and a drawer between this vague pulsating picture and the desire to stand up. A rider confused with his own horse.

The first trace was made, concrete, tangible, visible. It was necessary to set up a set of stands so that they would encircle the whole figure in space. The whole fragments. The head, hands, torso, legs and the feet. Every part, every line. The arms and the legs open and enlarged. Breaks or connections? How to arm this figure? What about the heights, angles, openings, distances, thicknesses?

Once again, the outline was crucial. I went to the Vitruvian Man by Leonardo da Vinci. He notes in his painting agreement… if you open your legs so high that your height is reduced by 1/14th and you stretch your hands so that your middle fingers reach the upper end of the head, you will find out that the center of the elongated limbs is your navel and the space between your legs is an equilateral triangle… a man inscribed in a circle.

Based on the comments of Leonardo and other artists from that period, I did a lot of pen drawings that examined relations, numbers and proportions. However, my measurements for body parts were calculated based on standard lights/LED lights – 1 inch for the head and legs, 1.20 m for the body and the upper and lower limbs. The stands were seventy centimeters tall. One for each part, eight of them all together. The distance between them and their position would be figured on the go. The first painting/drawing of the male figure was ready. Partial and distant from the ground, as it was meant to be.

I realized that even if the figure was large, it might be hard to see it. Even though it descended, it belonged more on the ground than in the space, and even its pieces were centered on a continuous geometric plane. That did not interest me. Then I drew a set of stands as a series of tilted lines so that the head parts were close to the ground and the legs at the other end were slightly higher; or one line forming a 7° angle with the other, starting at 20 cm and ending at 1.20 m. The drawings were adjusted through measurements, cuts, views, and details.

But that was still not enough. To seize the figure more accurately, I built a small model with thin wooden rods at a scale of 1:10. It was important to manipulate the model with care. To hold it in my hands and examine it. From near and far, top to bottom. The fragile balance between the figure and what it symbolizes.

The next step was to order it at the locksmith. New technical setup. Material selection, budget, lamp selection, clamps. After electrical installation. Sockets, discharge tubes, transducers. I also wanted a lot of cables to move the stands. Adding and subtracting gaps. Building distance. Many additional meters. All that’s left.

All done. Some metal stands almost invisible, a lot of tangled wires on the floor. Diffused reactors connecting cables and sockets. The traces of red light draw a short figure of a man in the empty space. Is he a photographer?