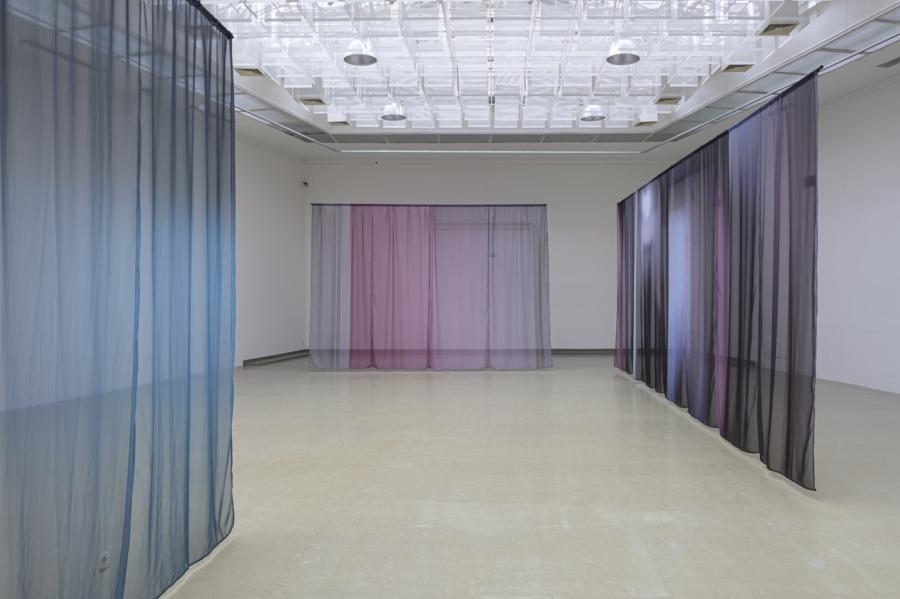 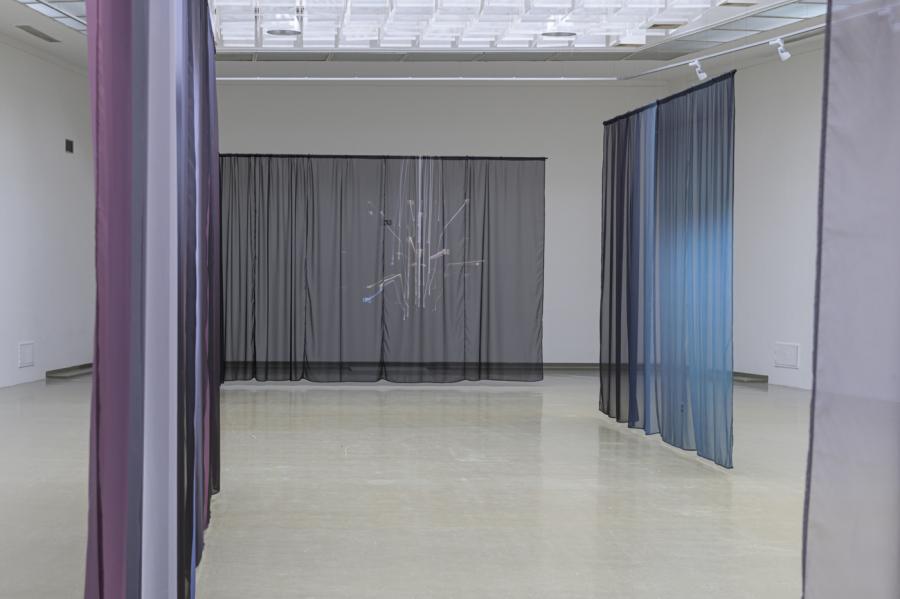 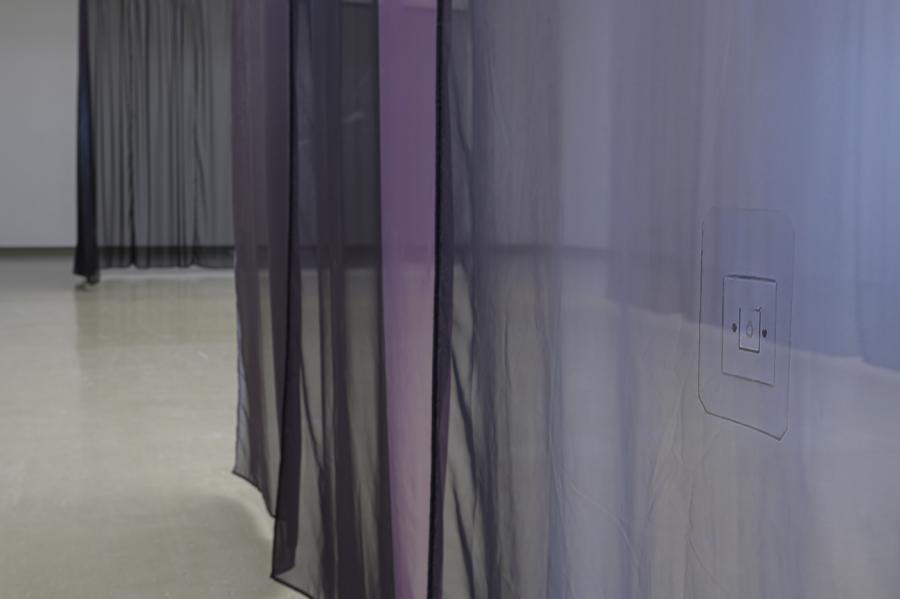 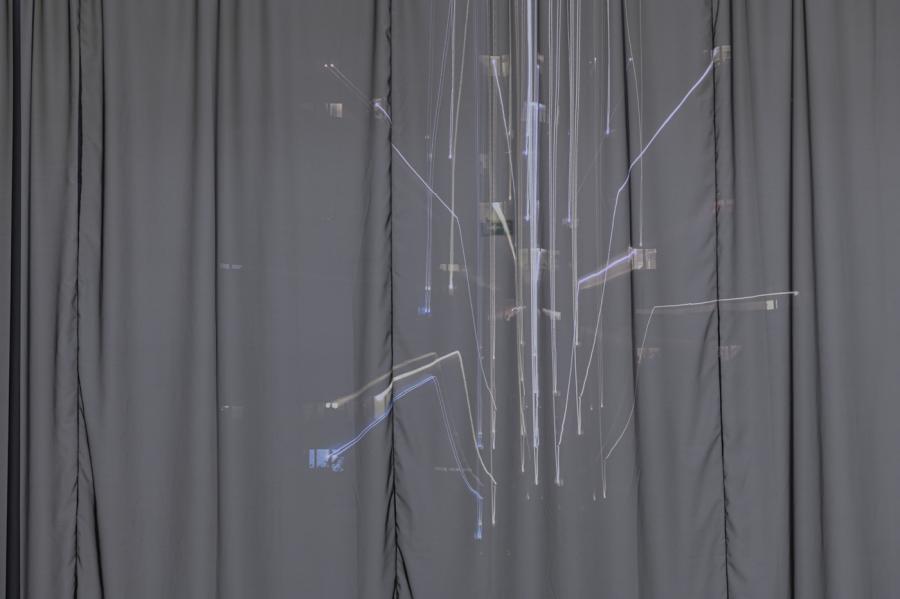 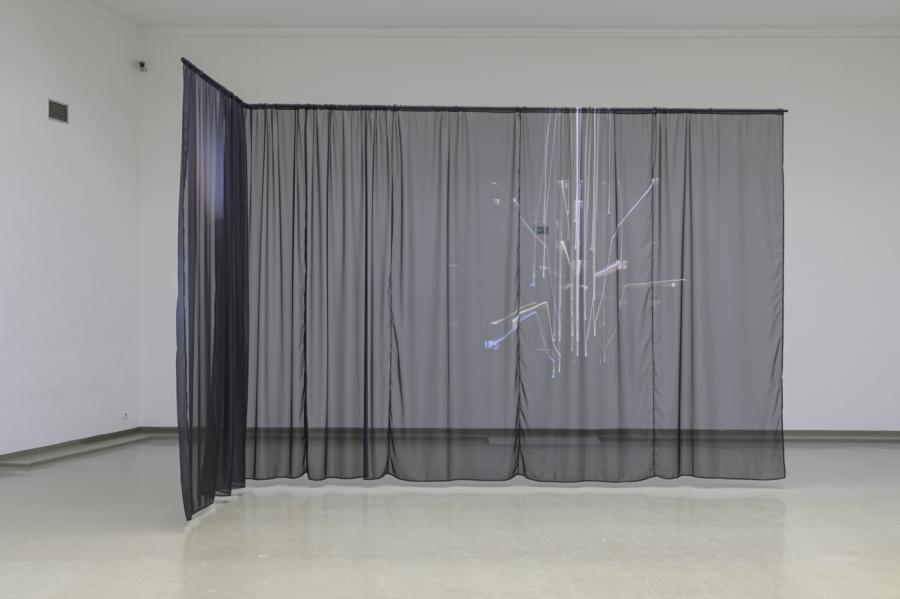 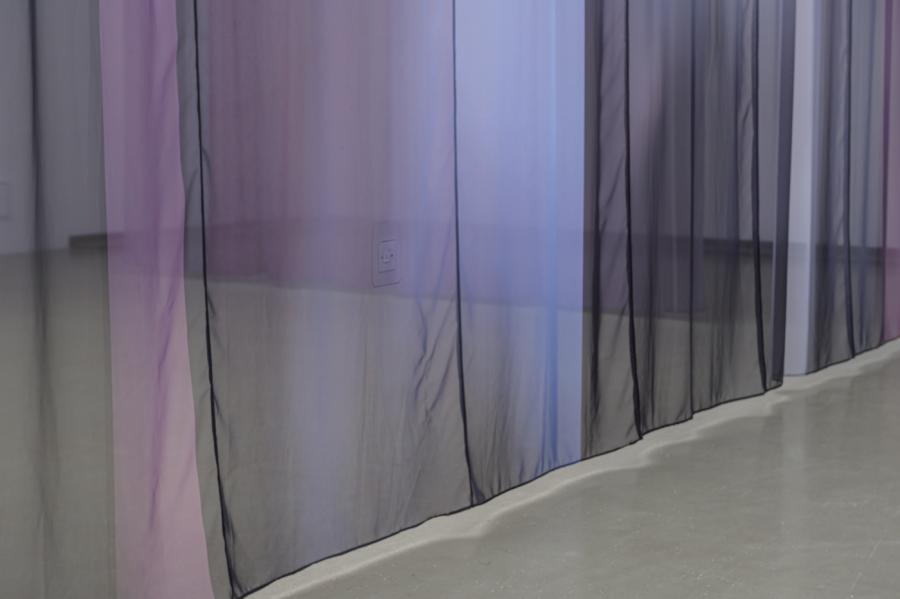 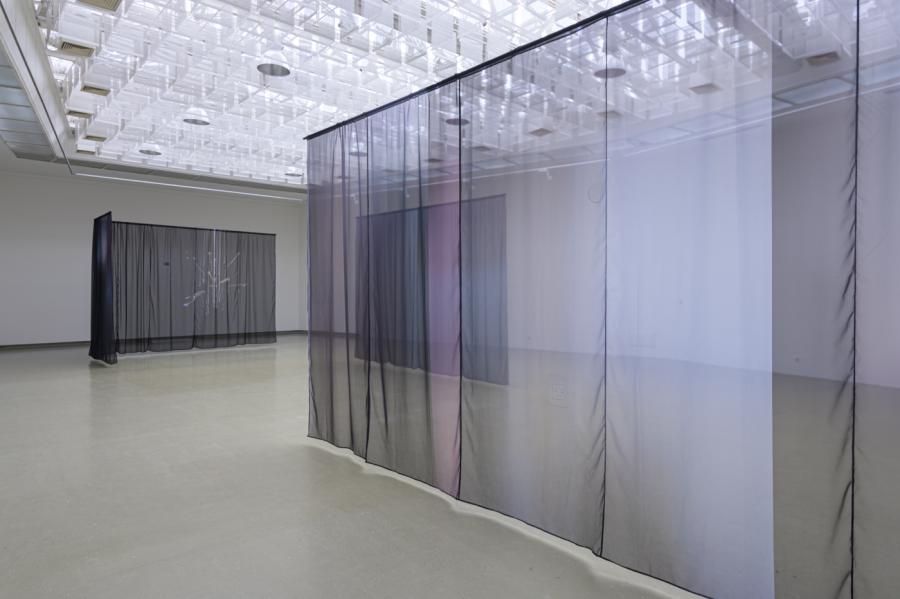 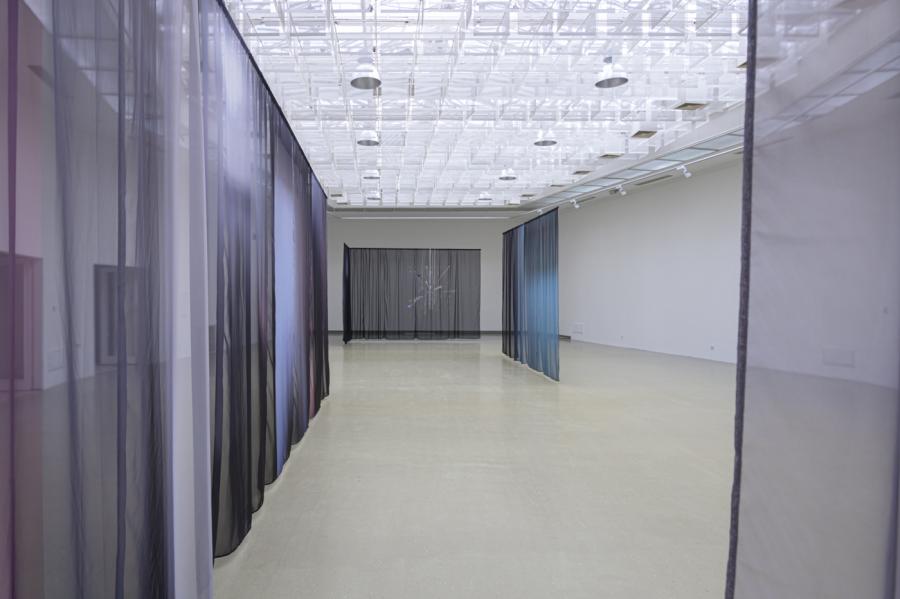 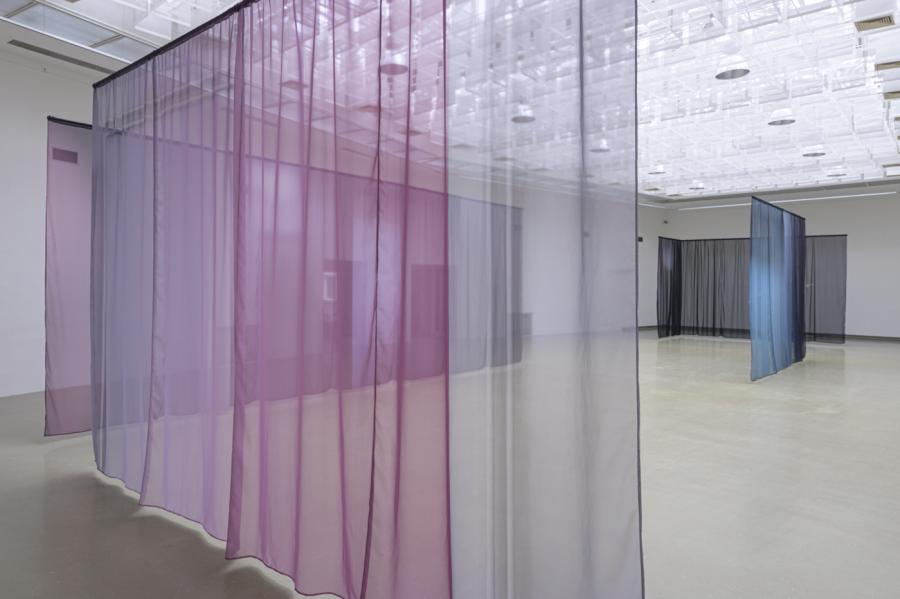 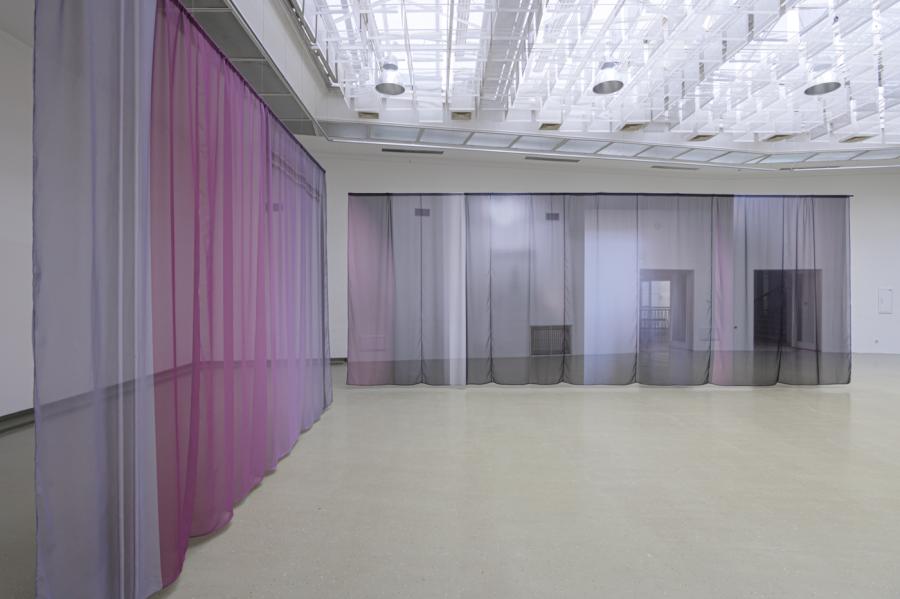 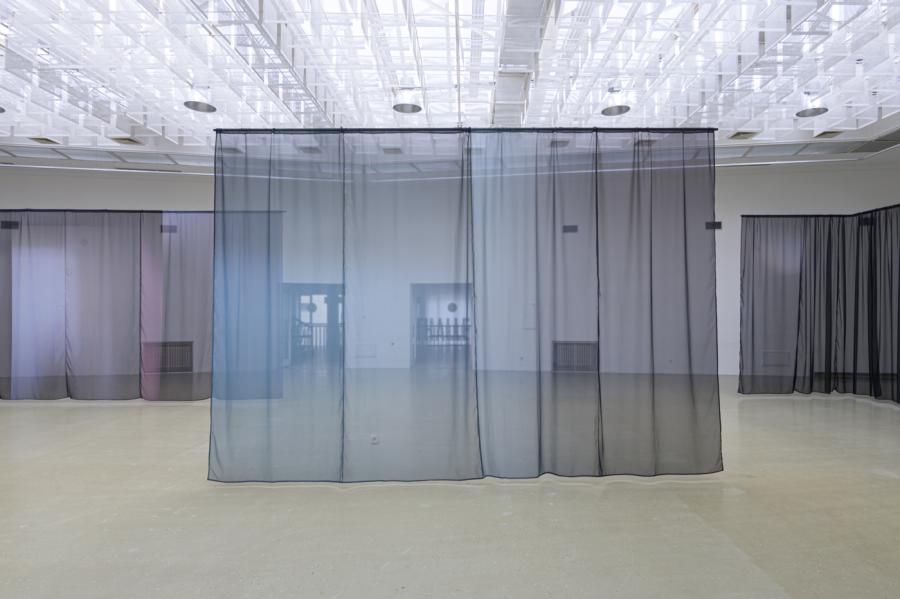 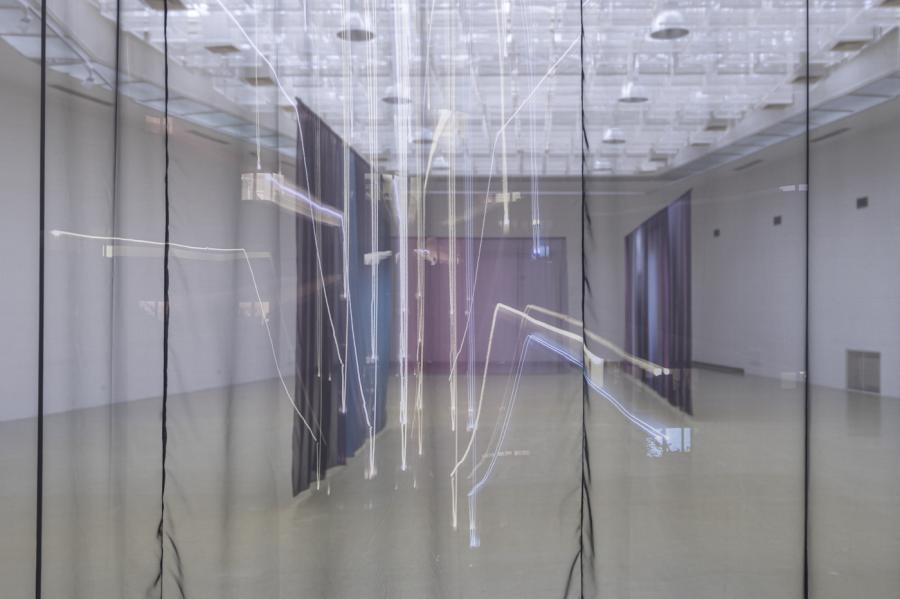 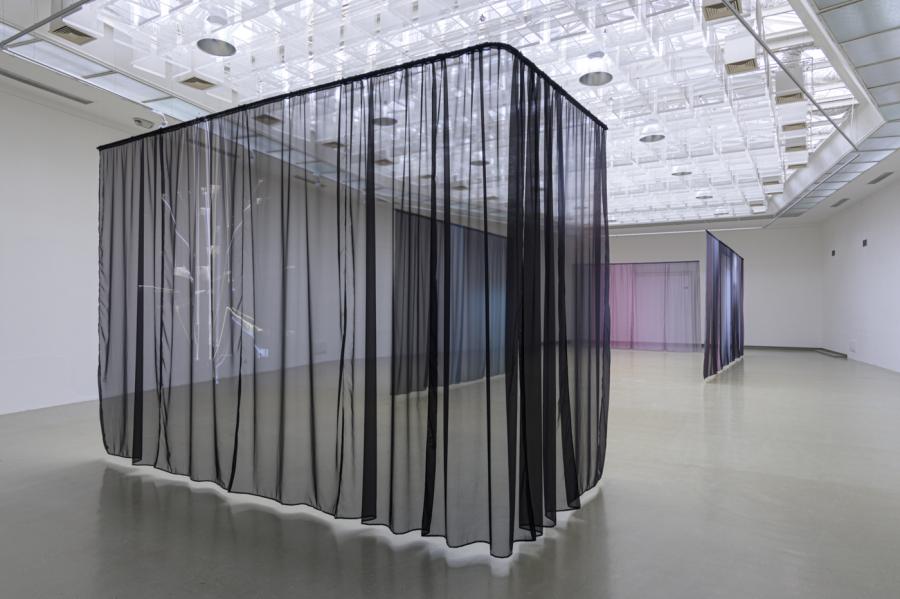 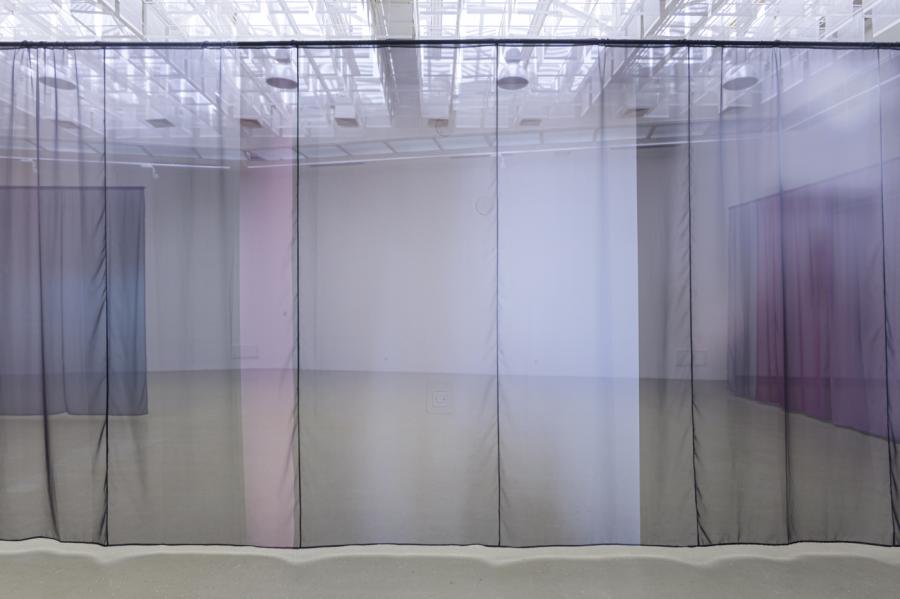 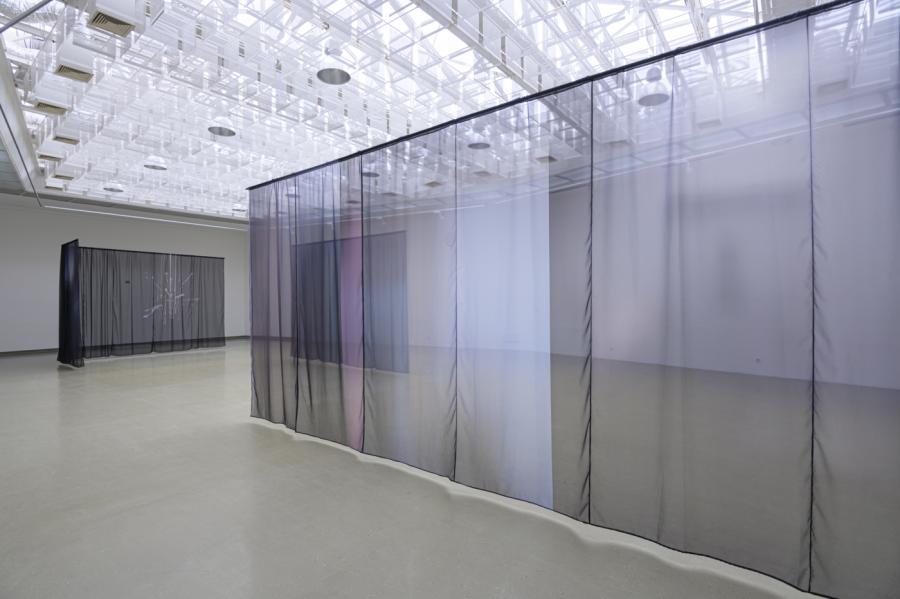 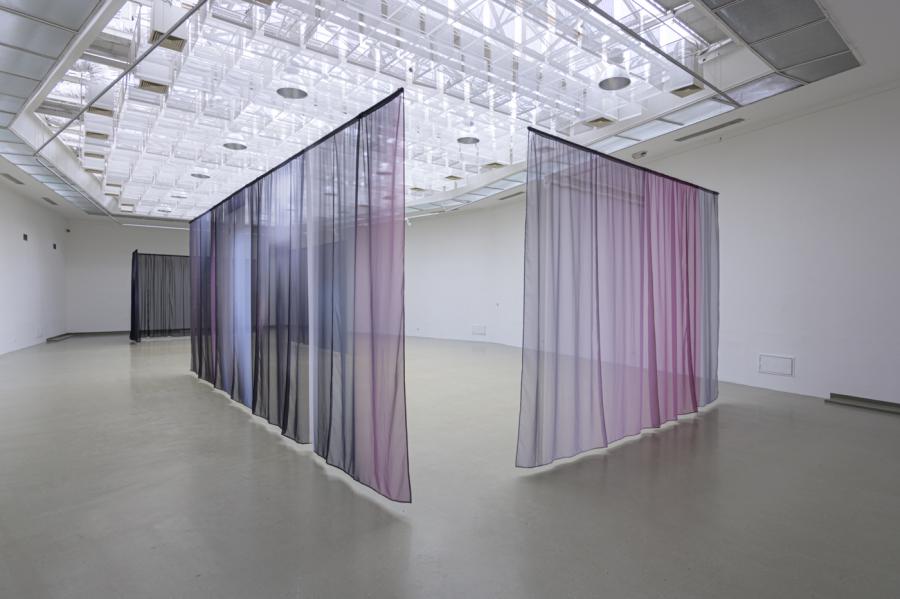 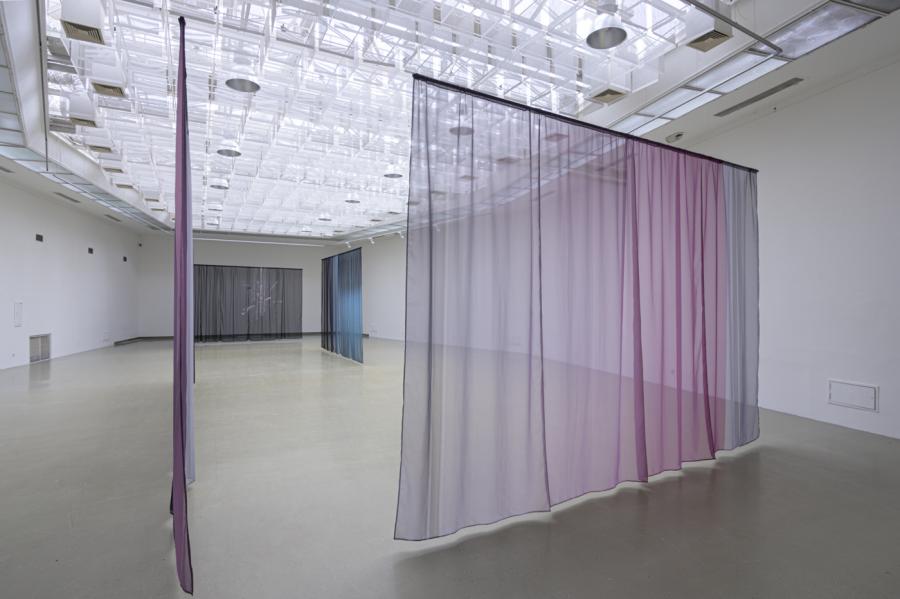 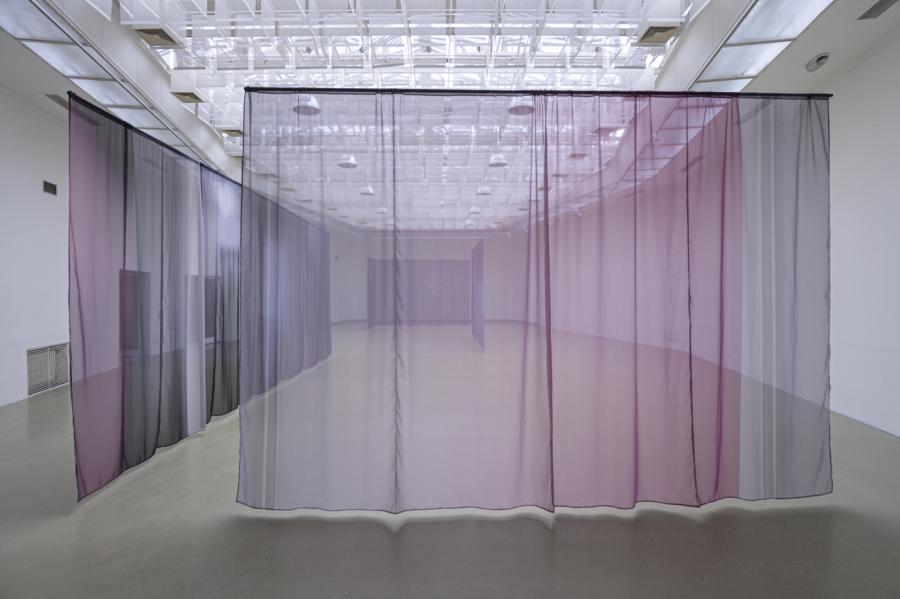 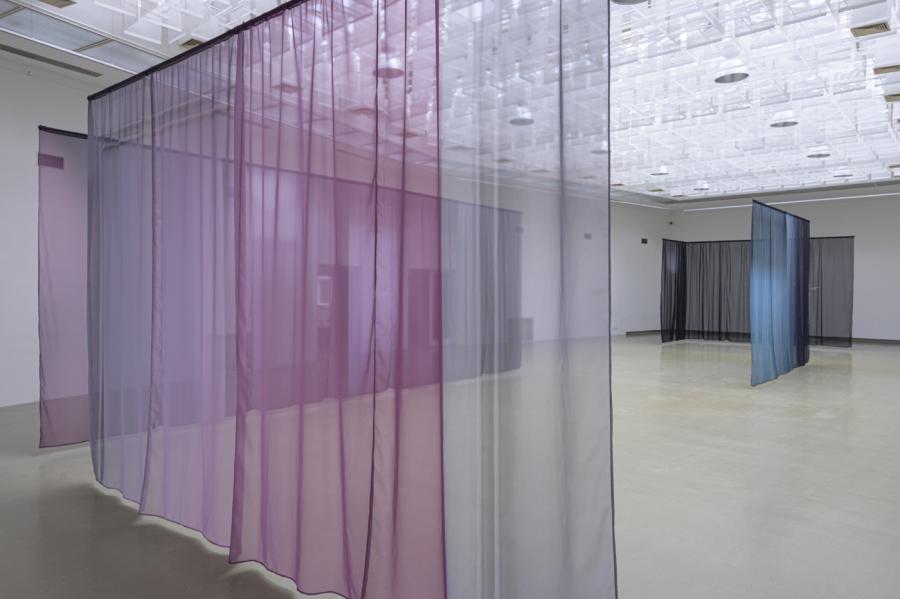 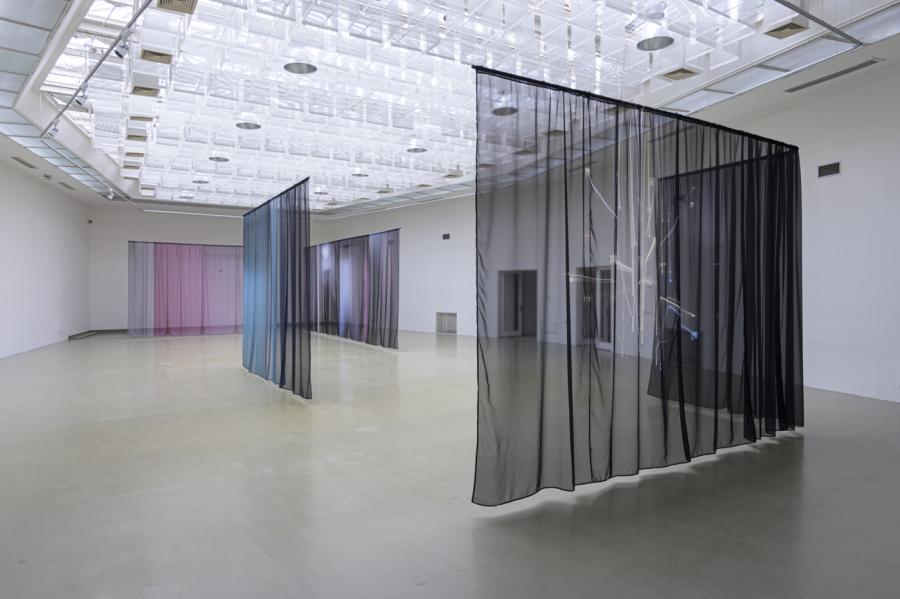 The exhibition project that Igor Eškinja has conceptualized for the central hall of the Kunsthalle Bratislava was from the beginning permeated with various uncertainties. These of course, mostly related to the problems and side effects of the pandemic, which has posed a peculiar challenge in the relations that emerge between artists and institutions. And this very condition can be also understood as a starting point for the exhibition concept: a subject where the artistic practice becomes an echo of relations, procedures, rules, processes, and which are in this case completely absent. Instead of using any reference, metaphor or suggestion, Eškinja had to submerge himself, in a phenomenological sense, into the void that the current conditions unintentionally created for him. Probably the most forceful element of these conditions was Eškinja’s inability to physically visit and understand the exhibition space, at first felt as deficiency in the whole process, but later became a main “anchoring” point of the project. As a consequence, the exhibition also establishes a parallel with the artist’s previous interest in changing the narratives of exhibition spaces, taking the specifics of the exhibition space as a main premise of the project. While the work and ideas of Igor Eškinja can be related to artistic practices which are grounded in the legacy conceptual tradition that focuses on the very idea of the artwork and questions the materiality of the object as the conveyor of meaning, it needs to be stressed that he never strives to completely dissolve the materiality. His interest lies in establishing a tension within the space, rising between the idea and the physical presence of the artwork: this is always thought the through attentive selection of the medium ranging from installation, to object, from painting to photography, or something that remains on the edge of materiality. That is the reason Eškinja’s project always seems as something that exists in the dependent relation between positive and negative, and as compendium of infinite transitions between two-dimensional and three-dimensional understanding of the space.

An elongated hexagon shapes the central hall, while a suspended monumental skylight illuminates and “controls” the volume of empty space from above. And this is precisely what grounds the exhibition project at a conceptual and formal level. Something that can be understood through a paraphrase of the thoughts given by John Cage after the first performance of his eponymous four-minute and 33-second composition: There’s no such thing as emptiness. What they thought was emptiness, because they didn’t know how to feel the space. It was full of accidental elements. However, if the void serves as a starting point, the exhibition is not an explicitly haptic experience of the space, but primarily coexistence between the central hall, its architectural details, and ephemeral elements such as light and movement. The intervention into the exhibition space involves one single element – printed synthetic transparent textile, whose intrinsic quality lies in its ability to react to the ephemerality of the exhibition space. The light and movement are not merely external factors, but essential elements in the understanding of the space. Through Eškinja’s intervention existing elements of light and movement, that usually exist on the edge of material presence, are not just revealed but somehow amplified and so they become a centre of attention of the spectator. Printed synthetic transparent textile is not merely an aesthetic object but rather a structure that, throughout the exhibition, questions the presence of light, its intensity and how this triggers the presence of colour. According to definition colour is a feeling, and its perception is influenced by long- and short-term phenomena that people define as characteristics of the light source that can be perceived by the eye. However, Eškinja is not as interested in the sole physical appearance of colour as he is in the role that light has in a particular social and political context. That is why the substantial element of the intervention are the images replicated on the transparent textile. “Night portraits” of socialist apartment blocks and their interiors on one hand make direct cultural relation between Eškinja’s personal environment and the exhibition venue, while on the other those same images examine the subtle details of these architectural structures, dissolving the lines between time, memory, history and their socio-political condition. A static camera monitors different exteriors and interiors which belong to people of different socio-economic status and are illuminated only by the different levels and intensities of light at the time of recording of the portraits. It is a transient, trembling, light whose source is out of the frame and is only defined by its reflection in the architecture. The light source, such as television, computer, table or kitchen light, here serves as a readymade; it is a pure source of light, devoid of all ideological features because of the distance of the camera. All information is abolished ­– there is no sound, and the image itself is recognized only in the secondary reflection, as a light of the interior. The presence of light is juxtaposed, at precisely defined intervals, with the uncompromising Cage – like emptiness of the elongated hexagon, with all its advantages and flaws. This creates the state of tension, expectation, and the possibility to challenge the spectator. On the other hand, the cacophony, which emerges as a result of intervened overlay of images, various intensities of light and movement, creates a field of uncontrolled unrest within the exhibition space. With almost minimalist strategy of questioning the relation between body, object and space, Eškinja defines the visual axis of the central hall by layering particular views that depend on the position of the spectator. As the experience is defined in relation to space, simultaneously time the body establishes the space in an almost Brechtian tone, in which there is no wall that separates the work of art, space and the spectator.

Once can sense and understand that Igor Eškinja in a certain way creates a choreography between various elements, which challenge the experience of the material reality of our surrounding, and subtly connects them with the possibilities of the fleeting and momentary. Suspense between the material and something that is on the edge of the material presence, between the visual and non-visual, is created within the space. This alliance of elements, a sort of fragments of materiality that do not have a mighty formal presence, culminate in some sort of “liberation” within the exhibition. Rather than through the physical inertia of mass and volume, which would fill the demanding exhibition space, the artist’s individually – introduced elements are dynamic and open. They strive to break the impression of weight and volume and in this way show the quality of emptiness of the architectural space. Intervention, as something that creates conditions for experience, rather than something that directs you towards the contemplation of the object.

TEVŽ LOGAR (*1979, Slovenia, Kranj) works as an independent curator, editor, and writer, and collaborates with various galleries and institutions. He worked with the Pavilion of the Republic of North Macedonia as a curatorial consultant and Pavilion of the Republic of Kosovo as a writer at the 58th Venice Biennial in 2019. He curated or co-curated a number of group and solo exhibitions, including When in Doubt, Go to a Museum (2021); The Triennial, 54th Zagreb Salon – Without Anesthesia (2019); Vadim Fishkin: Light Chaser (2016); Ulay: Irritation (2015); Crossings (2014); Jasmina Cibic: For Our Economy and Culture for the Slovenian Pavilion at the 55th Venice Biennial (2013); Bas Jan Ader (2012); Tanja Ostojić: Body, Politics, Agency (2012); Accretions II (2011), and collaborated with many other institutions. From 2009 to 2014, he was the artistic director of the Škuc Gallery in Ljubljana, Slovenia, and a lecturer of History of 20th Century Art at the Academy of Visual Arts (AVA) in the same city. He was the screenwriter of a full-length documentary Project Cancer: Ulay’s journal from November to November (2013) and a co-founder of the Ulay Foundation (2014) in Amsterdam where he now sits as a member of the Advisory Board. In 2014, he was nominated for the Gerrit Lansing Independent Vision Award (Independent Curators International) in New York. He lives in Rijeka, Croatia.