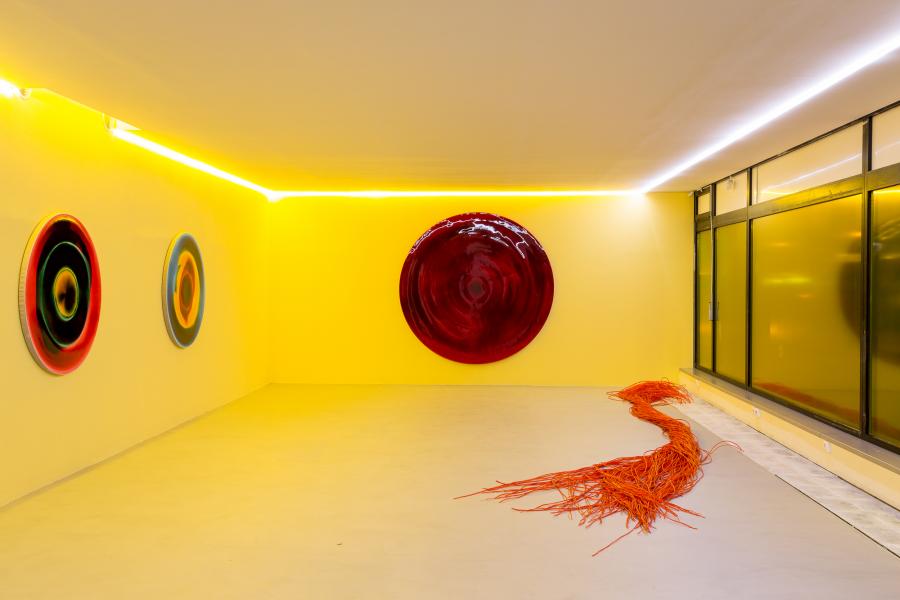 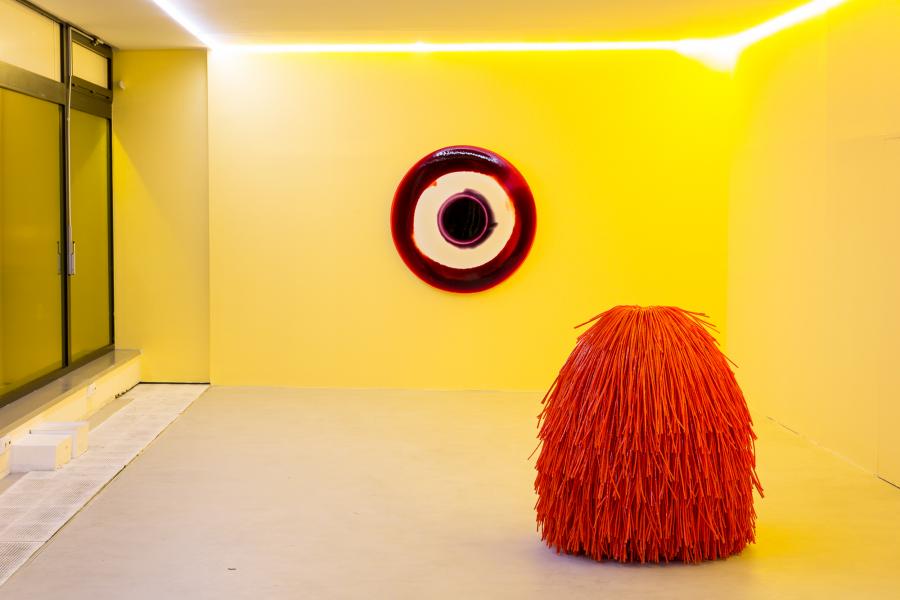 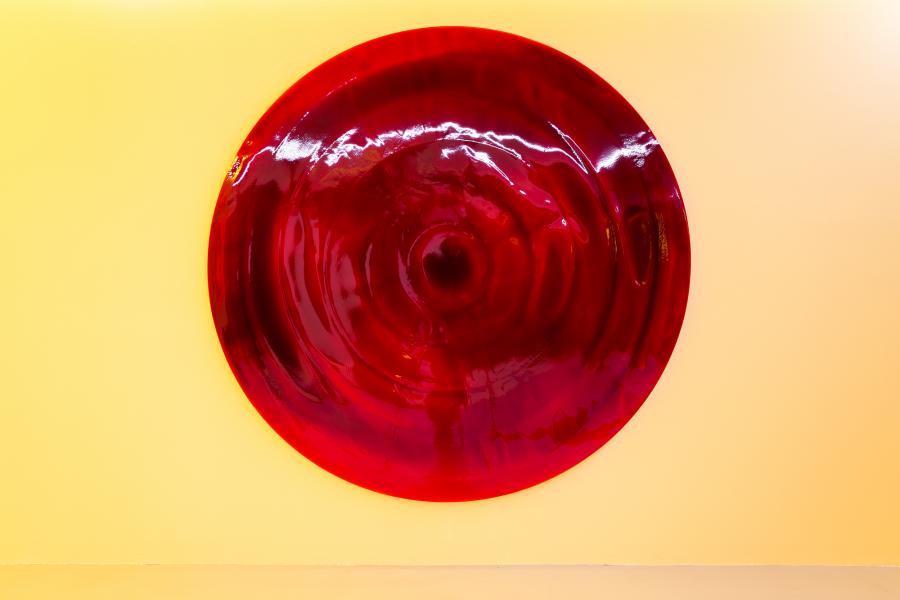 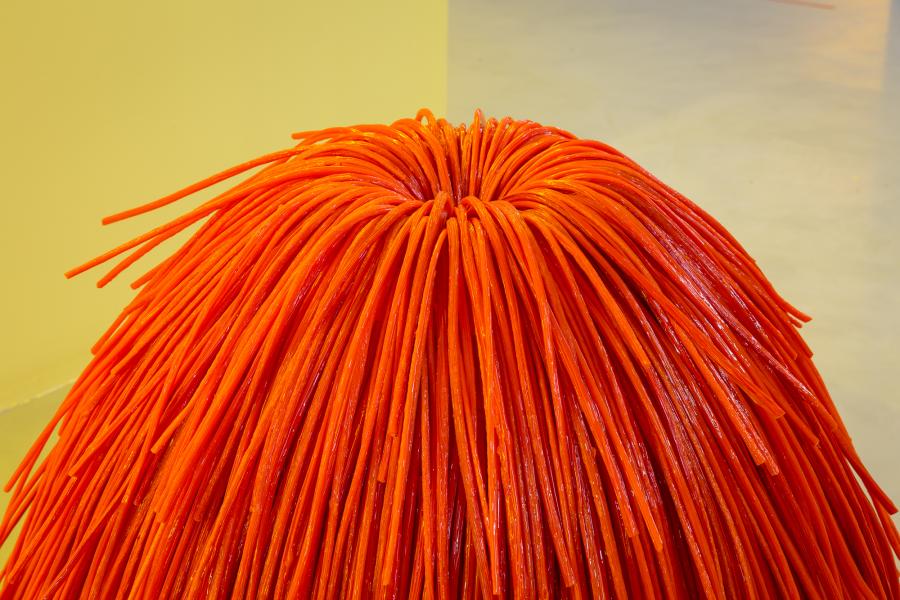 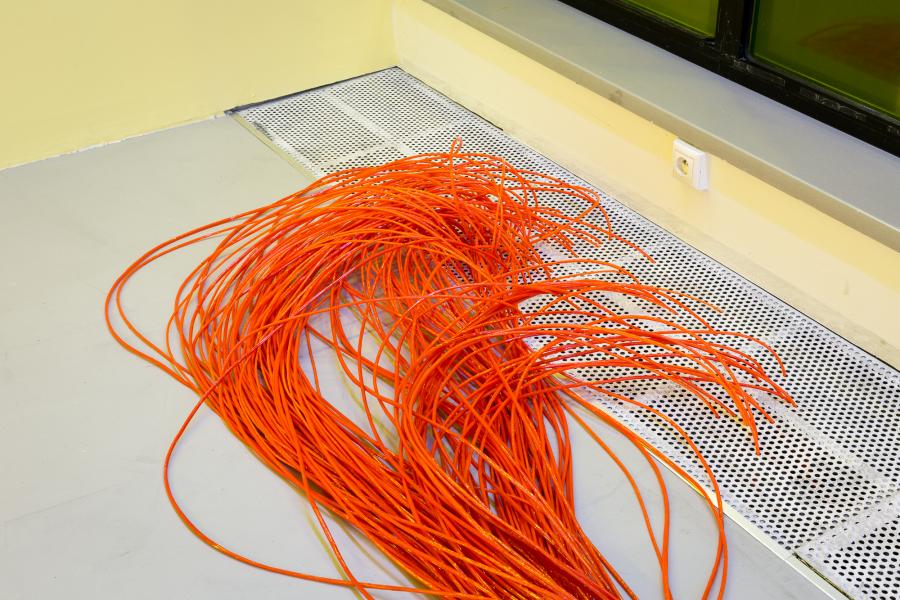 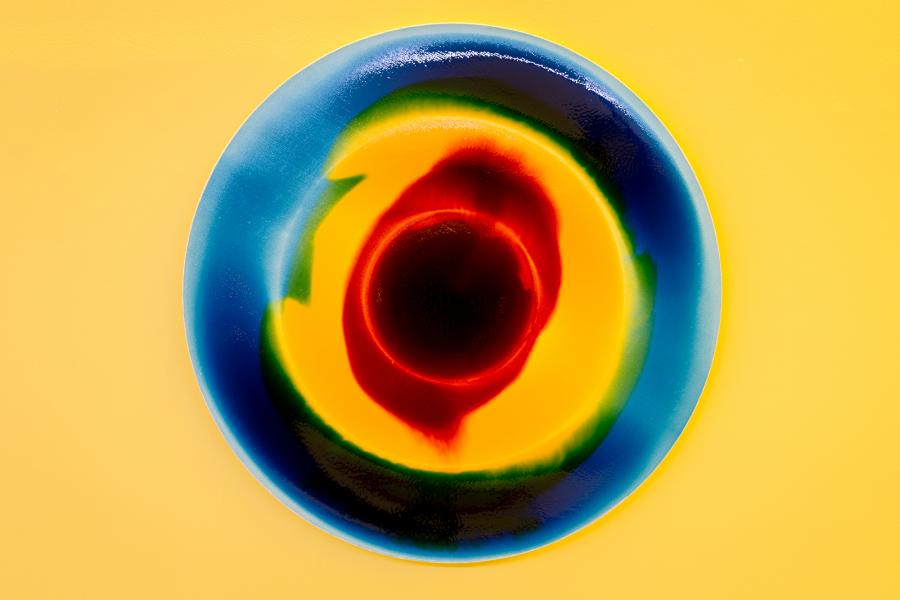 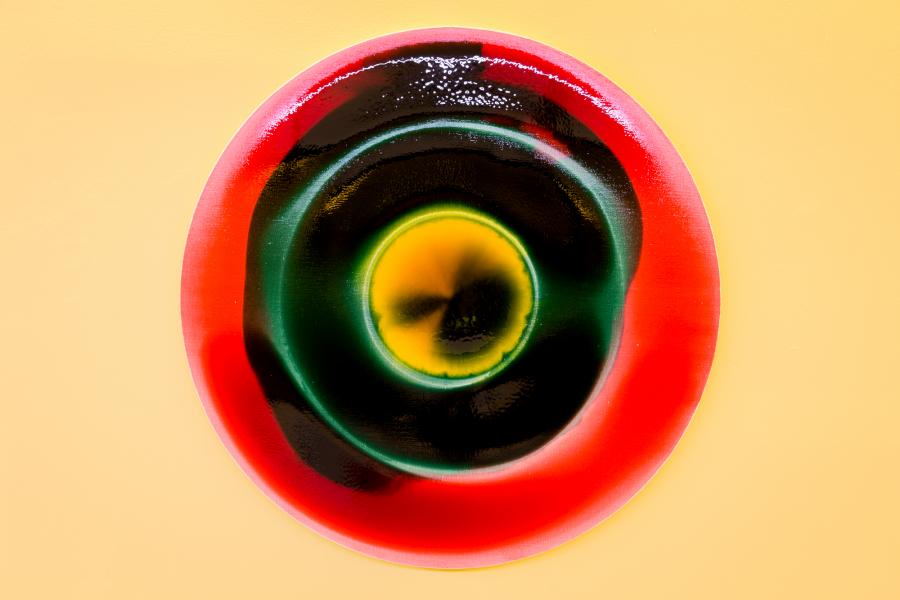 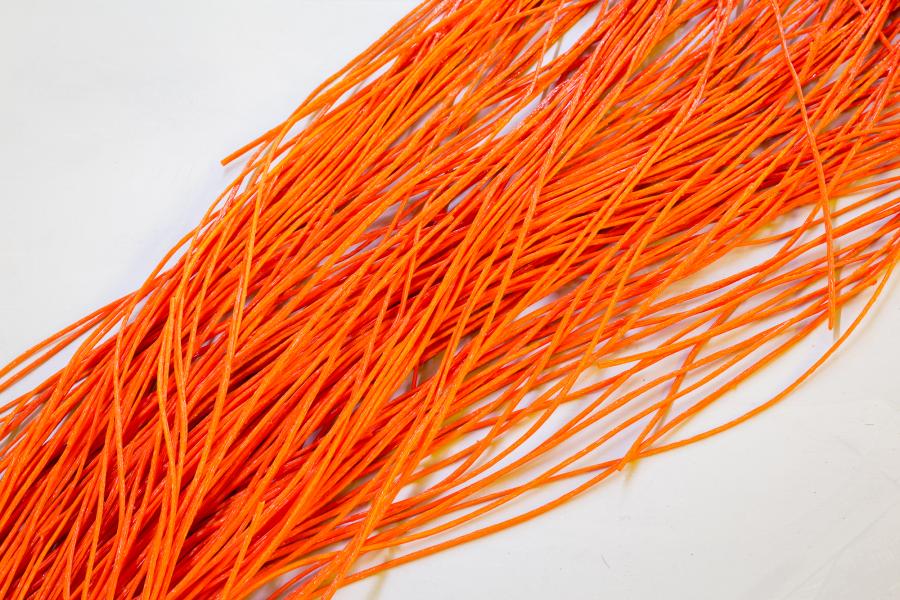 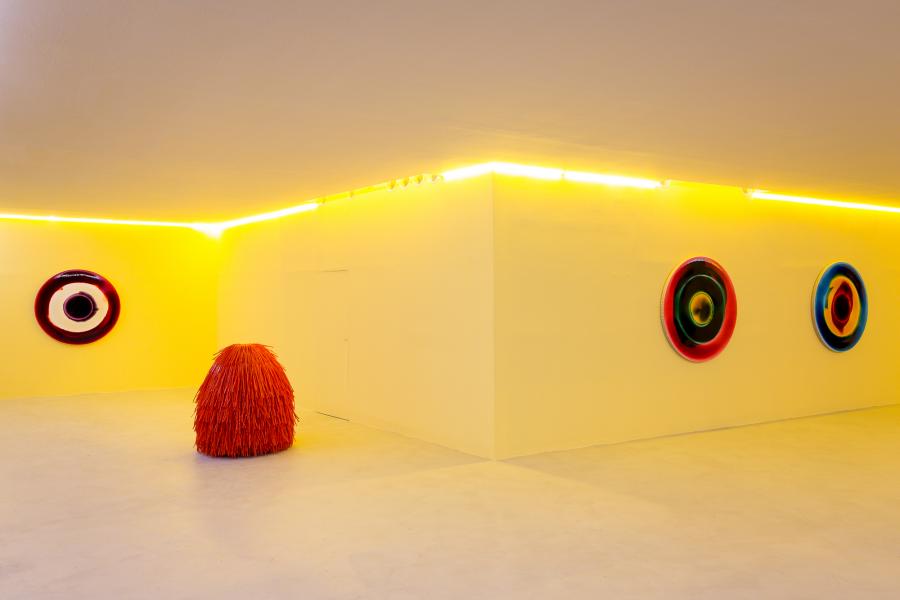 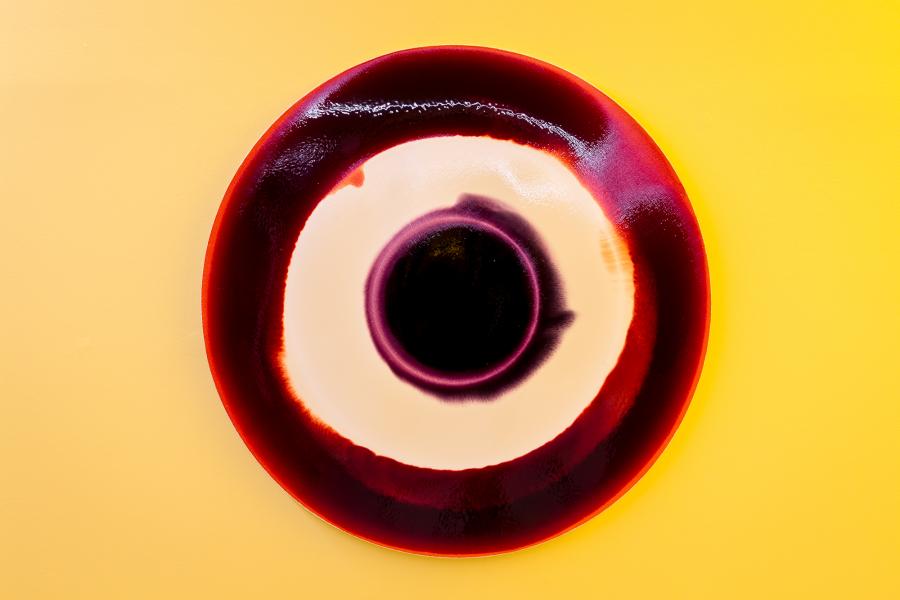 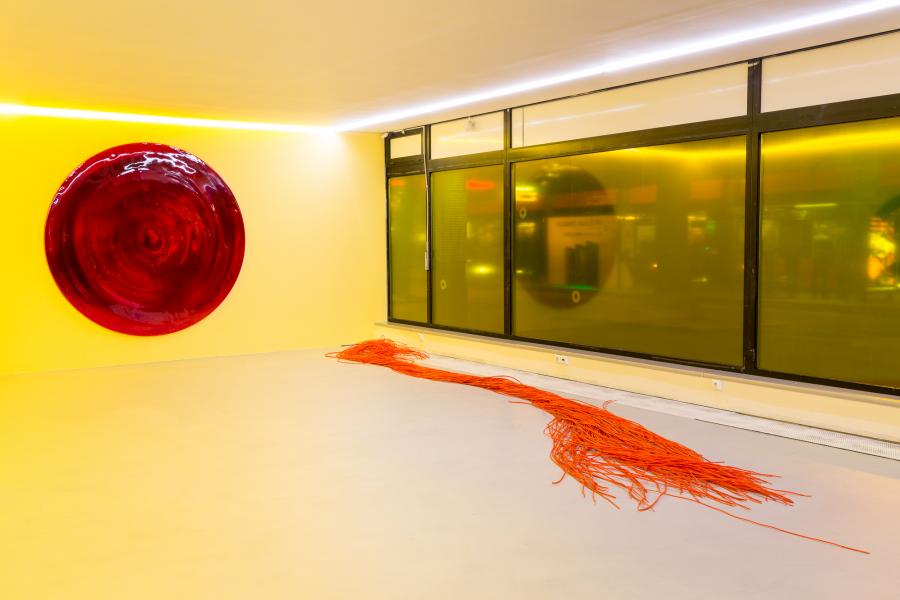 This solo exhibition by the Czech artist Milan Houser (*1971), entitled Connecting Point, is appropriately held in the Kunsthalle LAB, which indeed provides a laboratory environment for the space of painting or painting in space. Ultimately, since this is an accompanying event at a Czecho-Slovak exhibition of objects, we may also see it as a contribution on the borderline forms of painting and object (multi-kilogram circles with a strong blind frame; reduction of painting to pigment fibres of congealed varnish which are stretched out in space; and so on). Dominating the exhibition are concentrated circles with poured paint, pigmented varnish knots, and yellow transparent folia. This triple combination changes the overall character of the exhibition hall. For the most part it is a newly-defined territory of colour, an uncertain terrain of new visuality, a hall for connection or fusion to another dimension…

Milan Houser has long had a programmatic interest in materiality, the material of painting itself. Characteristic of his approach is the examination of all of the basic material components of the picture: blind frame, canvas, colours, pigments and industrial varnishes. Programmatically he abandons the illusive or narrative quality of the pictorial field, with its social messages, and he concentrates on examining the fundamental expressive means of the medium of painting and their ability to sustain their own visual information. But this has nothing to do with modernist pronouncements on the ending of “the rule of the object” in art and the contemporary “cooling of faith” in the subject. Rather, Houser is closer to the non-anthropocentric views of speculative realism, where phenomena and objects have their world and meaning even without human presence and interpretations. Hence he sees the picture more as a painterly body, a physical visual object, rather than an abstract painting or pictorial surface.

This artist mainly uses industrial materials and technologies. He creates extensive untitled series of pictures operating with firmly defined formal rules. For a long time he has been exploring and testing the possibilities of using a specially manufactured varnish, which is currently his principal technological means. How his pictures come into being is that he repeatedly pours the varnish and lets it dry, so that from shallow margins it acquires a mighty depth and complex colour amalgamations; the visual result is unambiguous, and even radically direct. Houser’s work is distinguished by formal tightness and consistency. Programmatically he inclines towards extensive pictorial series, actually never brought to a close, where he tries to encompass all the nuances of the modes and possibilities of manipulating his technology of casting. Houser makes his furthest advances in spacious monochrome fields with a high gloss. By creating strata in these “mirrors”, he achieves surprising depths in the interior of the picture. The viewer can thus “switch” between two regimes of visibility: follow the reflected surrounding world in a form where colour and proportion are distorted, or equally resharpen the focus and make one’s way within the material, and then observe only its volume, consistency and variety of colour.

In this exhibition, which thematises the phenomena of colour itself, pigments, and depth on the painting surface, the painter presents a series of concentrated monochrome or full-colour circles (Untitled, 2018). These may resemble eyes, lenses, puddles, targets, cosmic bodies, solar protuberances, etc. They open up a space for a reading of the individual painterly strata and their possible connotations.

At his solo exhibition Colourmetry at the House of Art in Brno in 2016, Milan Houser prepared a lavish installation of a network of hung red threads or fibres of paint. This was a site-specific installation, a direct response to the architecture of the house, and at the same time it was a reduction of painting to a naturally seeping and gradually congealing varnish with pigment. It was a distinctive use of the moment of gravitation as an artistic means. This borderline demarcation of the medium of painting was not just a monumental gesture of the occupation of space with colour. It also presented a series of questions testing our cultural sensitivity: What is painting in our time? Is it possible to reduce it to fundamental gesture and pigment? Is painting possible without connectedness to a surface? This dialogue of painting with architecture has produced a powerful gesture of liberated painting stepping out into space. Furthermore, it has validated Houser’s long-term research of the materiality of painting and his concentration on physical and chemical forces and processes (changing space by using colour; interface of pictorial field – space of painting; organic liquidity of the painterly matter and geometrical order of blocks or circles; and so on). After all, work with the mass of paint or with pure pigment is topical on the current international scene also. Paint and pigment as a dominant element in space, in combination with sprays, waxes, and digital initiatives, brings new dimensions to the perception of painting in its extreme registers (e.g. Katharina Grosse, Anish Kapoor, Fabian Marcaccio, Jason Martin, etc.). In Bratislava’s LAB this moment of full-blooded “fibres” of painting is recycled into new knots, rods, plaits, which “touch” and occupy the given space. They bring a certain plastic and organic moment to the geometric framing of space and pictorial formats.

Besides the pictorial fields of circles and painterly-object fibres and cables, Houser presents a powerful embracing environment of colour and light, gilding the background walls and pasting transparent folia on the perimeter glass. What emerges is an intensive irradiation and superheating effect of yellow colour; also, however, the classical exhibition space is fractured. The artist has created a kind of laboratory setting where the atmosphere is saturated with expansive colour points and fields. With his interest in the “material” itself, he has made a model of a dematerialised space full of colour and light – a unique “Colour House-r”. Concentrating on centripetal circular compositions, simultaneously he combines this with a centrifugal colour environment, a visual centrifuge that transports you to another space of colour, light, and subsequent contrast. The colour space thus exhibited is for the visually gifted and moderately advanced…

VLADIMÍR BESKID (*1962, Semiduby, Ukraine) is a Slovak art historian, curator and cultural manager. He graduated from the Philosophical Faculty of Comenius University in Bratislava (1985). He engages in research, presentation of research, and presentation of modern and contemporary art of the 20th and 21st centuries in the wider Central European context. Vladimír Beskid has published high-level studies and articles on these questions (e.g. The Situation of Visual Culture in Post-War Slovakia. In: IRWIN (edit.): EAST ART MAP – Contemporary Art and Eastern Europe; Afterall Books and The MIT Press Cambridge 2006). He is the co-founder of the Department of Visual Arts and Intermedia at the Arts Faculty of the Technical University in Košice, where he also taught (1998 – 2002). Since 2012 he has been co-organiser of the international festival Sound City Days/Mesto zvuku in Košice. As curator he has prepared over 80 exhibitions of contemporary art in Slovakia and abroad. In recent times he has concerned himself with the development of Slovak (post)conceptual art (exhibitions include Soft Codes, Contemporary Museum,Wroclaw, 2015; Reversed, Museum of Contemporary Art, Nový Sad 2016; Probe 1, GHMP Prague, 2018). He lives and works in Trnava, Bratislava and Košice.