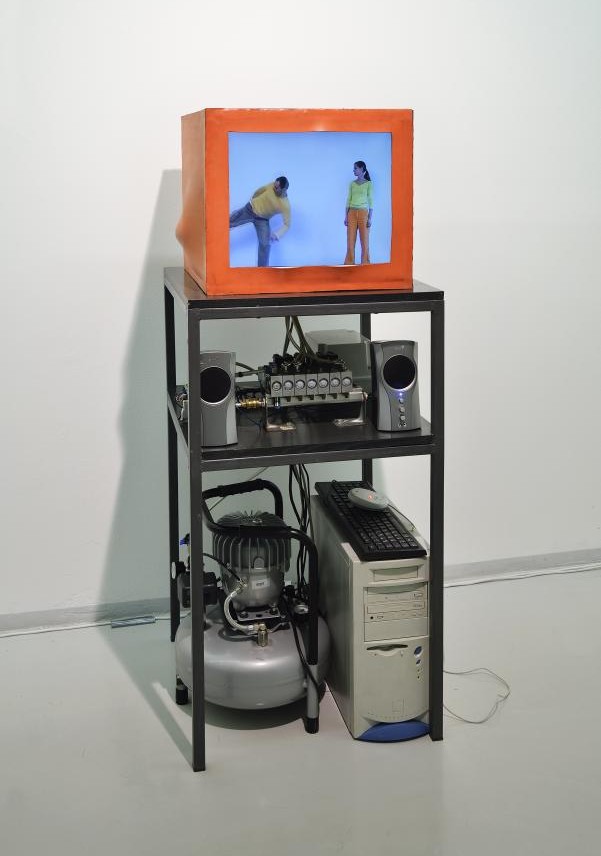 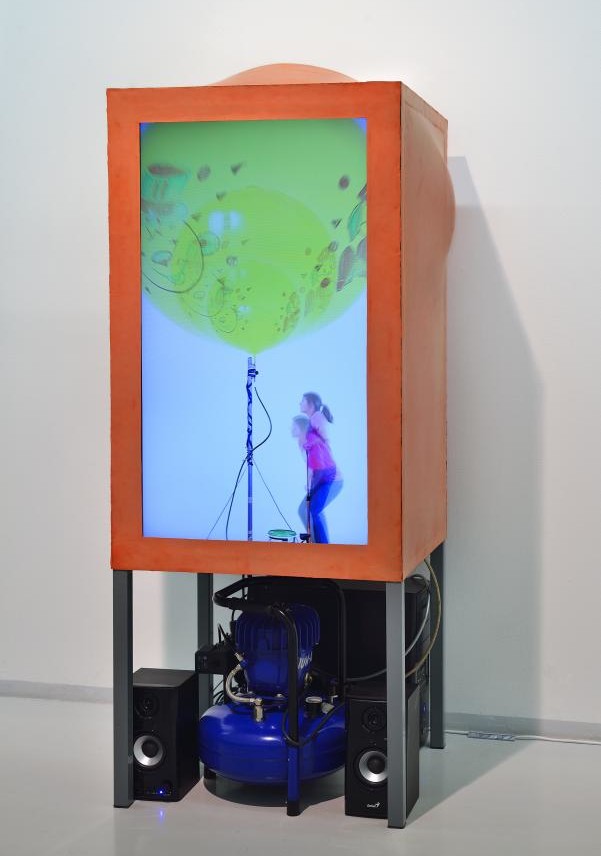 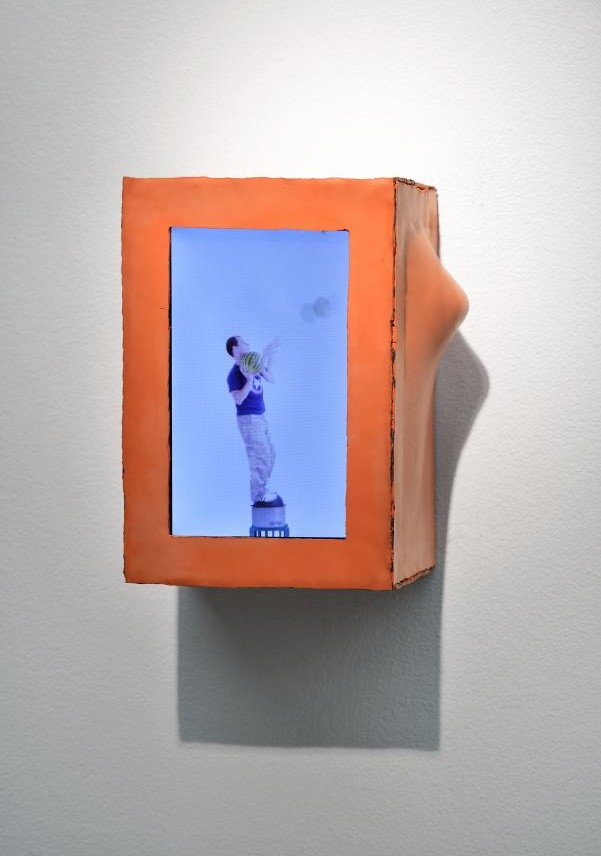 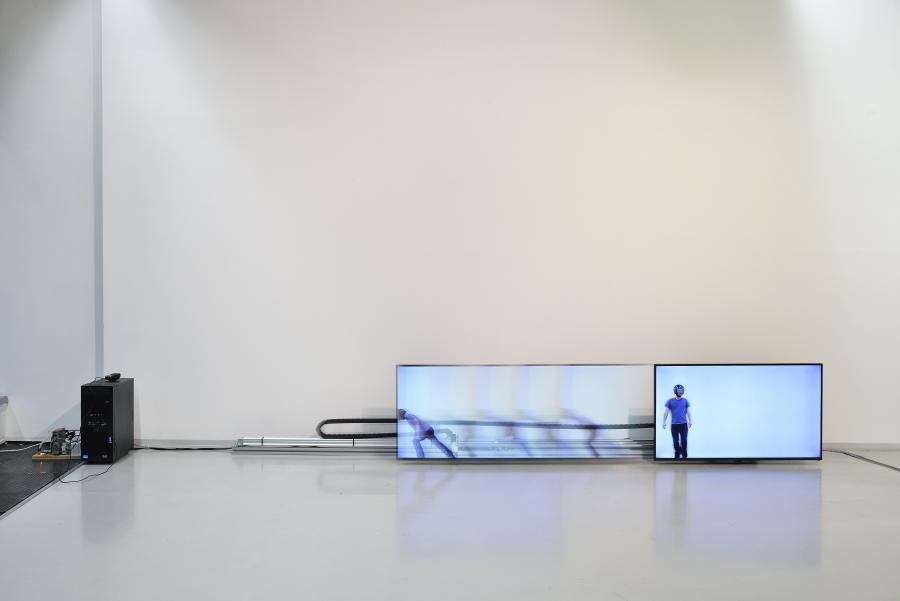 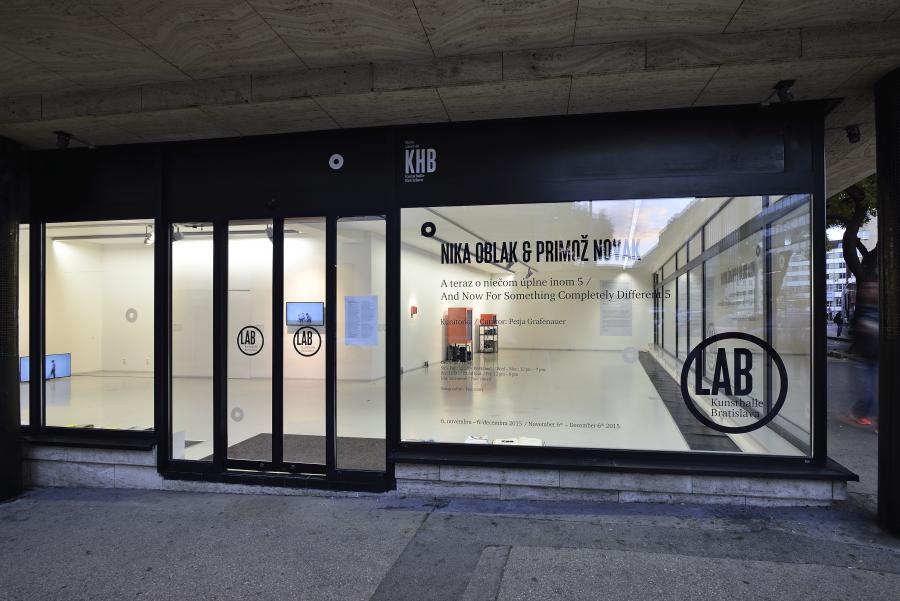 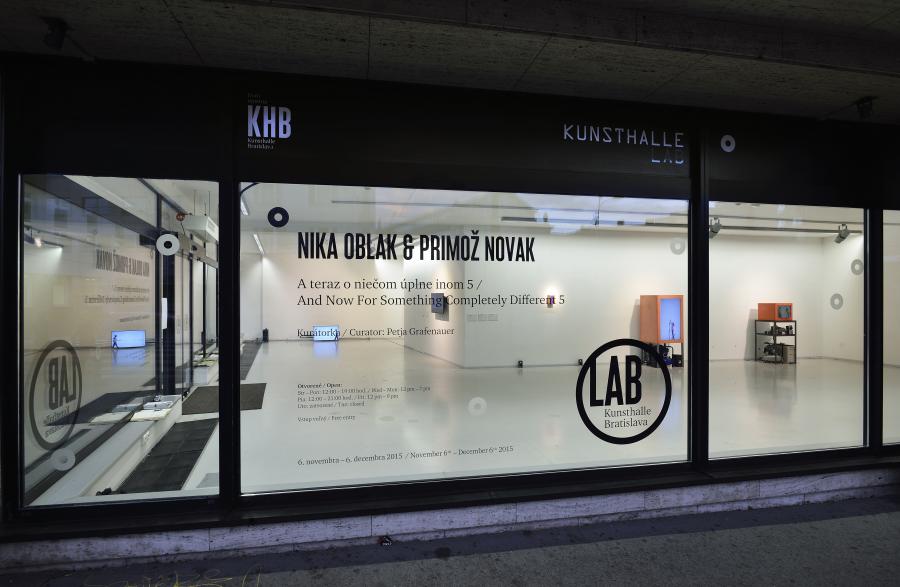 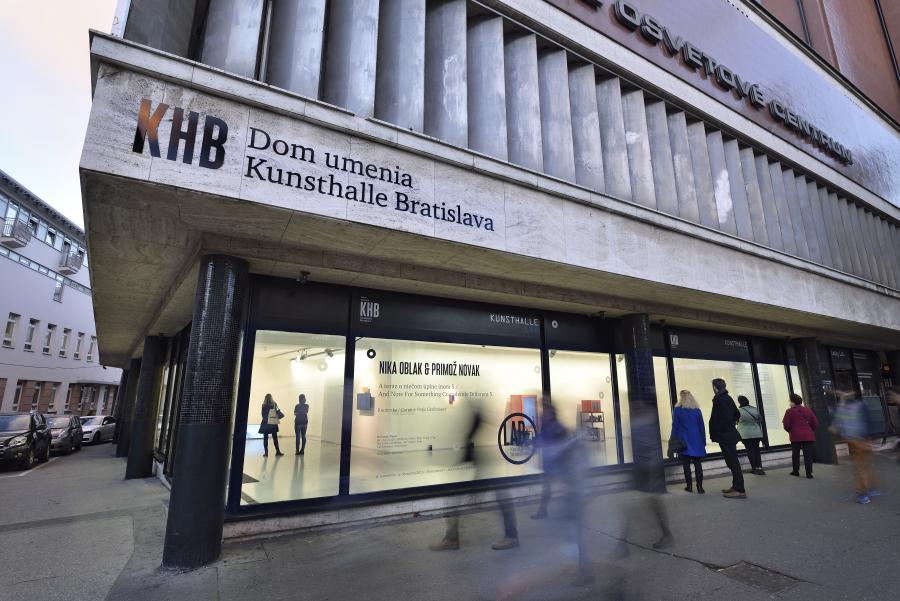 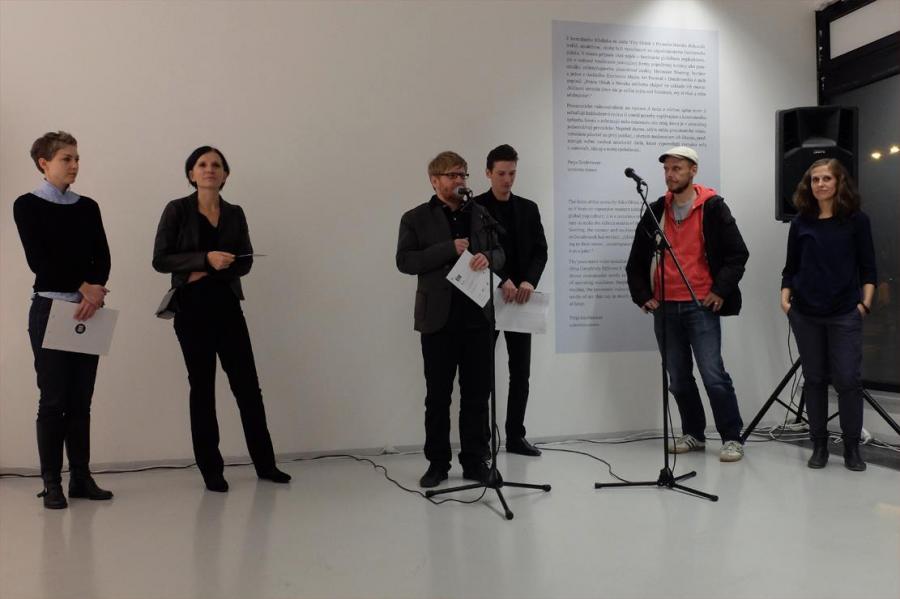 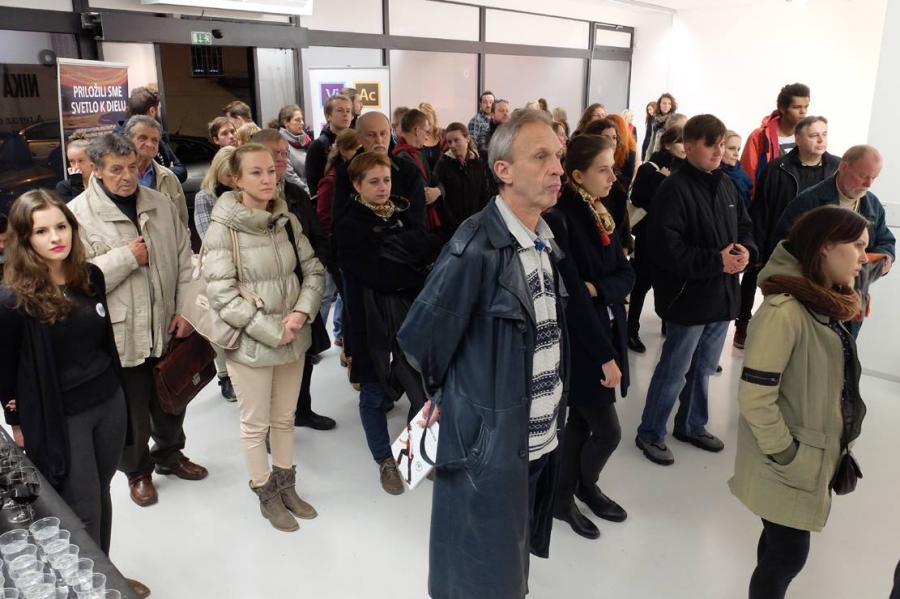 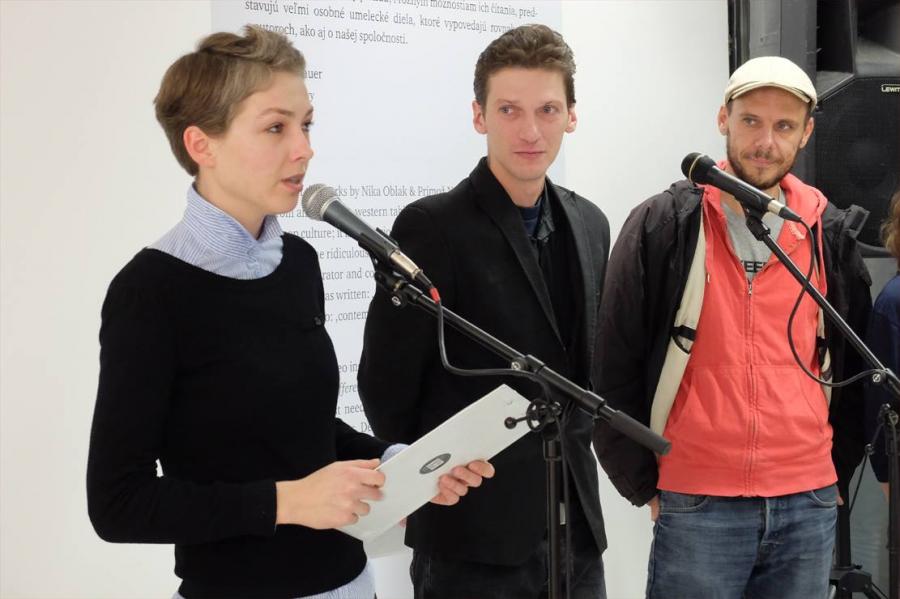 And now for something …

Nika Oblak & Primož Novak are an artist duo. They are representatives of the new, global art village, moving from one place of the globe to the other, doing residencies, developing projects, exhibiting worldwide.

Slovenia’s art scene where they started their journey is vibrant internationally since the late eighties. In the nineties, when Oblak and Novak were studying at the Academy of Fine Arts in Ljubljana, the conditions for art were improving on a monthly basis. Of course, as the whole world felt, in 2008 a crisis followed. In Slovenia it was as unexpected as everywhere else, with the exception that we, the citizens, were for at least ten years brainwashed into thinking that we are becoming the new Switzerland. In art this ideology at first felt like a time is coming, when the artists will still be funded by the state, with no necessity to produce art for the nonexistent market. There was this idea that art was produced because it was important, because it enriched our lives, because it was good for us. Not because it would have had to be sold at some point. Not because artists also had to earn a living. Not because there was this constant capitalist yearning to produce more and faster. Art was, for a short period of time in the nineties and early in the new millennium, produced because it was Art. This brought forth many interesting projects, artist’s art, people’s art, smart and profound art working on various levels. The early projects of Nika Oblak & Primož Novak came into being amidst this situation.

But of course this state of things did not survive the crash. Today it seems that Nika Oblak & Primož Novak felt this before everybody else did. Already in the beginning of the new millennium they depended more on the international scene than they did on the local one. Their works, be it appropriations of famous films like the videos Shund or Cab Driver, where they took over all the roles from the actor to the director, or their hilarious series of photographs recreating the weirdest Guinness records or even their apparatus Smartist, which was inscribing their names on every surface it came upon, were already from the beginning very certain of the importance of the artists name and presence which they mockingly exposed in their projects.

The form of the works by Nika Oblak & Primož Novak is shiny, appealing, as if from an expensive western tabloid. This is not a fascination with the global pop culture; it is a conscious use of the existent form of popular culture to make the ridiculousness of the reality even more real. As Hermann Noering, the curator and co-director of the Electronic Media Art Festival in Osnabrueck has written: »Oblak’s and Novak’s work can be read according to their motto: ‘contemporary art is nothing but a business but we take it as a joke’. As artists they regard themselves as part of a social system based on unconditional consumption with a capitalist face in which media present the pursuit of maximal accumulation of material wealth as the meaning of existence. According to Guy Debord, an important reference for Oblak & Novak, consumer capitalism transforms everything into a superficial spectacle. The consumer is more or less an appendage and the passive end point of the product, whose promise of happiness already fades at the instant of purchase. But another product is always immediately available to renew the promise. In this pseudo-world of harried consumerism reality becomes invisible and repression latent. The media are the main vehicle of this ‘society of the spectacle’, controlling the individuals’ desires by means of stereotypes, images and ideology. Yet the content of the media is less decisive than the fundamental structures of media itself. Structure in fact determines content. The form of media inscribes itself into its messages. Media shape society.

There is some terror behind the glossy surface. There is the terror of impossibility, a terror of unfulfilled wish, a terror of Sisyphus who is pushing his rock to reach the top of the mountain over and over again. Trapped in the television set the work speaks about the current media society, which spends much more time looking at the screens of this or that sort than contemplating in front of paintings, turning book pages or feeling the space of an installation.

The pneumatic video installations form the exhibition And Now For Something Completely Different 5. They expose the daily routine, artificially produced consumerist needs and illustrate our existence as the monotony of operating machines. Despite their appearance and this wider possible reading, the pneumatic video installations presented are also very personal works of art that say as much about the artists as they do about society at large.

A short while ago at some symposium in Zagreb German art critic Hans Jürgen Hafner presented his paper titled Pfff. This was one of the rare and truly personal lectures I have heard in recent years. He was hip, even hipster like, contemporary in his words and image and his speech fitted perfectly to what Nika Oblak & Primož Novak bring to the audience with the exhibition And Now For Something Completely Different 5. He has enough – he said standing in a dark hall of the Museum of Contemporary Art with an inexcusable beer bottle on a speaking stand – of all the wishes, all the personal investment in art, enough of fruitless theories that support the unfulfilled wishes of the art world and most of all enough of money talk. Art is not strong enough to withhold that. It will never save the world, we should stop hoping. It will not help the rivers of migrants. It will not persuade people to behave towards other people in better ways. None the less, he still adores art. He finds it necessary for his wellbeing. The goal of art is for us to enjoy it. It can make us open for new ways of thinking, acting and living, but the decision and the struggle is not in the arts, it is in us, the observers. Art just opens up the door.

Art is always an elitist endeavour but the elite are not the mighty and powerful as in the times of the Paris salon, when it was already a marketable good. Today the elite which is dedicated to art is mostly an elite of possible free thinkers, a writing proletariat, an audience of art villagers, of precariat, self employed artists, young university professors, exhausted curators, lovers of sushi and iPads who organize welfare events for the fugitives, people who understand what is happening in Syria, but can’t do much about it, as they have their own struggle to attend to. They have to create, do yet again another production – hence the number 5 in Nika Oblak & Primož Novak’s exhibition title – answer a never ending line of e-mails per day, set up exhibitions, travel, represent, produce, distribute and sell, if possible. Or get grants, take on new and new residencies… On their way, this art proletariat is lucky to form new networks with the likeminded of the globe, but these networks are not strong, as they have to be woven in a day, a week or a month to answer to the funds given for the opportunity. To keep the fragile relationships alive, it is necessary to rely on the World Wide Web with all its youtubes, facebooks, gmails, instagrams, twitters and pinterests. This world brings connections but also a constant flow of information, the needed and the unwanted ones.

Primož Novak & Nika Oblak present the pneumatic video installations: Sisyphus Actions, Reality is Out, The Box and a new production, presented in Kunstalle Bratislava for the first time with the title Border Mover. The installations are seemingly a part of this world, but they are more than that. Technically based on a pneumatic mechanism, they are able to transmit the two dimensionality of the screen into 3D. The image seems to be strong enough to move the border outside into the real world. In reality, there are the pneumatic mechanisms placed behind an LCD monitor, and this is controlled by computer and synchronized with the video. Still the works bring out an unexpected sigh in the viewer. This sigh is a sigh of excitement, a small fulfilment of a child’s magic wish. Also involved in the story of And Now For Something Completely Different 5 is humour, which is specific for the entire oeuvre of the duo.

The works by Nika Oblak & Primož Novak are communicative and inviting. They are impressive when seen live and draw crowds of all generations wherever they are presented, since they are easy to approach. People are curious of how they function, they are drawn to ask technical questions, which leads to questions about what art is and whom it is intended for…

When the audiences are lured in and when the loud laughter stops, the reality steps in. We get a story of a small man trapped in a box which he cannot get out of. He repeats his actions, never quitting, never stopping until his last day, when the television stops working and the laughter gives place to the awful silence of the desert that late capitalism has left behind.