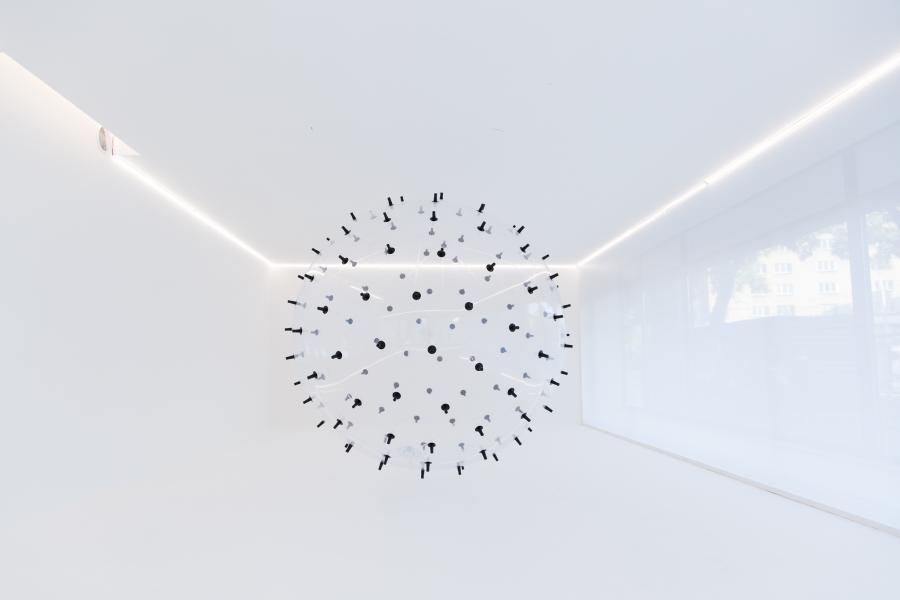 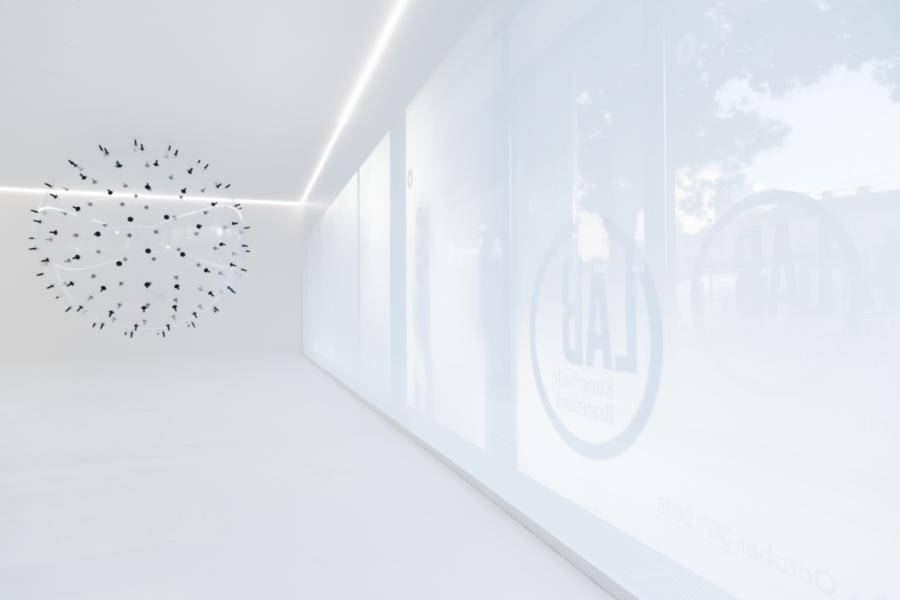 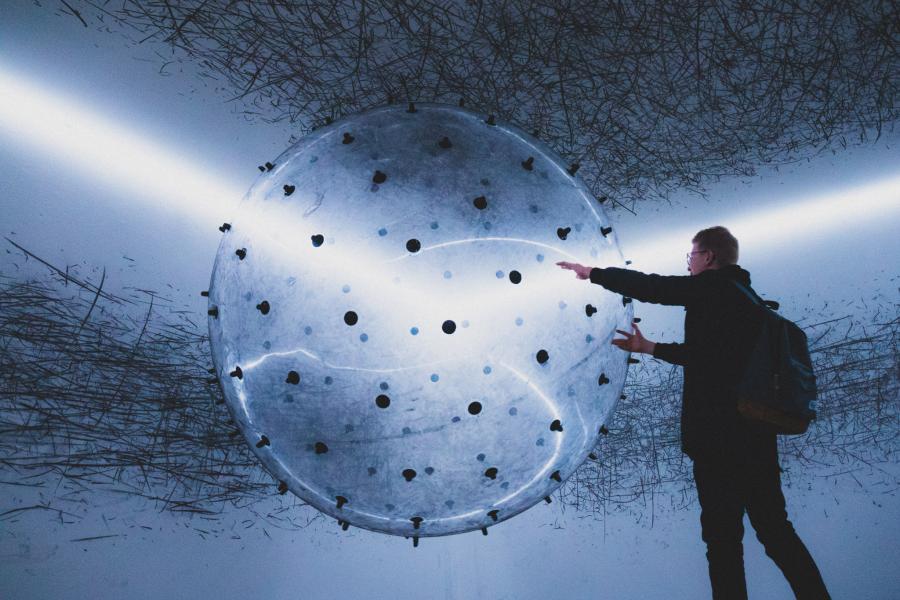 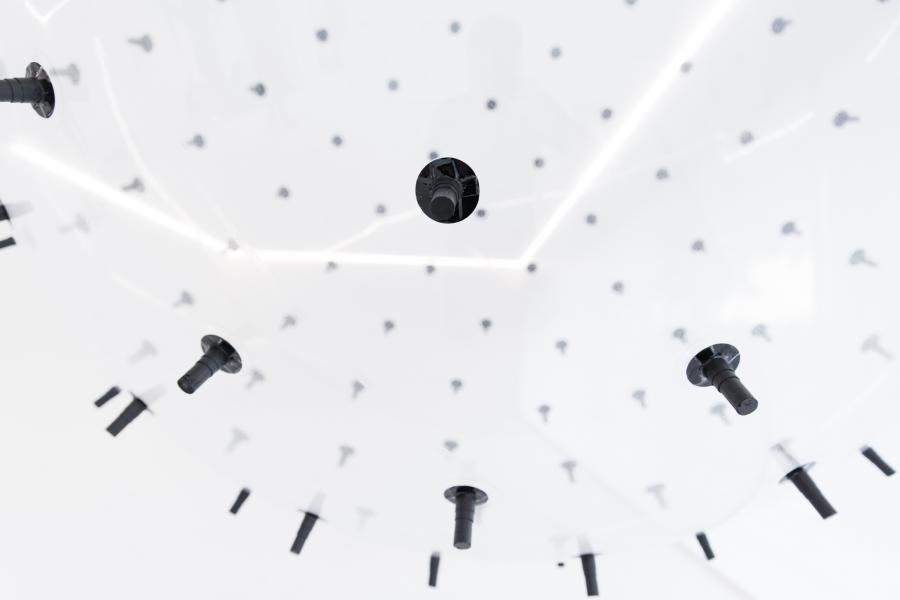 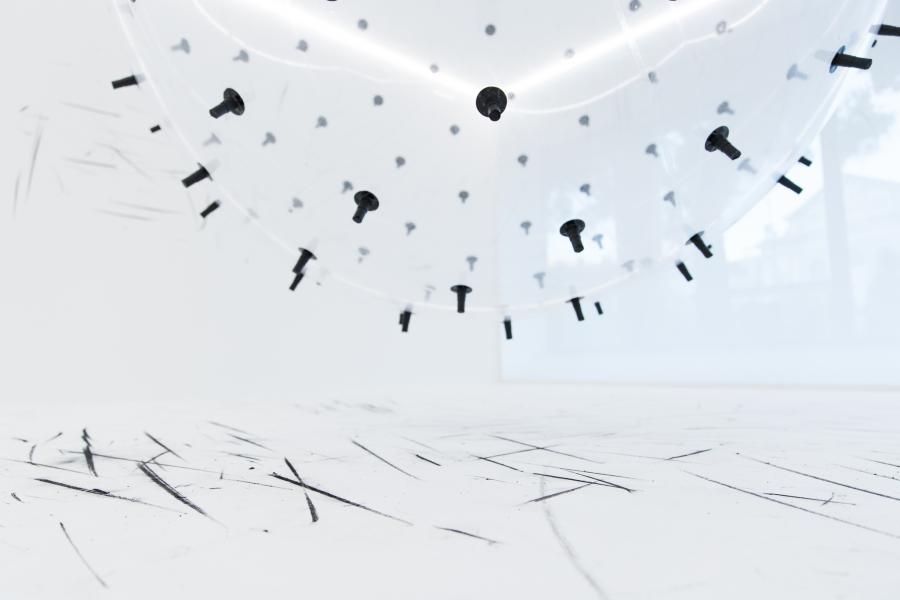 ADA is a post-industrial “creature”, calling to mind a molecular hybrid from nano-biotechnology, with a capacity for producing works by an open source method. This is an artwork with a soul. ADA is aesthetically complex, interactive, communicative, freely floating through space. It is transparent, in places prickly, making one think of a membrane; a ball filled with helium, whose surface is composed of some dozens of spikes of charcoal.

ADA is a haptic drawing machine – it is the slave of our desire to move it. It demands participation from us, draws us into its game, wants us to connect with the process of creation. By its negotiation of space an unpredictable “event” of drawing begins along the walls, ceiling and floor of the gallery.

ADA does not need programming: what we have here is an analog interactive kinetic object. Its genesis was inspired by the activity of Charles Babbage and Ada Lovelace, who made the concept of the computer in the 19th century. Babbage provided a pioneering calculating machine, Lovelace in turn described the first software. Ada Lovelace’s aim was to create software which would be capable of producing artworks (poetry, music or paintings). It was this which suggested the initial idea of Karina Smigla-Bobinski’s flying sketching ball.

ADA communicates by various means. We can simply slap it like a beach ball and let ourselves be hypnotised by its movement. It is infectious. Under the illusion that we are able to dominate ADA, we try to control it and coordinate its drawing. We are in a trance and after a while we forget where we actually are. ADA, however, is self-sufficient, and despite our efforts the traces it produces are entirely autonomous. The transparent ball takes on the aura of a living thing and its black charcoal traces take the form of drawing. Impelled into motion, the ball creates a composition of lines and points which nevertheless remain unforeseeable in their intensity, expression and form, no matter how we seek to manage it or tame it. We try everything, and very quickly we realise that ADA is an independent performer, adorning white walls with sketches and signs.

ADA shows us how we can experience movement visually. An ever more complicated structure emerges. One of the sources of ADA’s interactive character is Karina Smigla-Bobinski’s long-held conviction of the necessity of practical experience with art. One can see this in her previous works, where she likewise laid emphasis on the participative aspect, with each visitor having the option, depending on his/her will and ability, of deciding how deeply to go into the artistic experience. In this way the artist responds to the traditional manner of viewing art in the gallery setting, often restricted simply to the opportunity to look.

ADA is a live performance-machine – a self-forming artwork. The drawing of points and lines becomes more complex, depending on the increasing numbers of visitors “playing”. It leaves traces which none of those present, the artist included, are able to decipher. Despite that, ADA’s resulting work is unquestionably human, because the only available method of decoding the drawing is association. Our brain for the most part understands it and subsequently decodes it.

ADA, together with the artist, poses the question of whether we can regard the flying object itself, or the resulting drawings on the walls, as an artwork. Smigla-Bobinski leaves open the position of a preference for content or for purely visual aesthetic experience with the presented form. She does not define the interpretation, entrusting that to the visitors’ hands. What the artist has begun, the public will conclude.

ZUZANA PACÁKOVÁ (*1986, Košice, Slovak Republic) is  a curator, dramaturge and project manager. She studied conception and direction of cultural projects at Sorbonne Nouvelle Paris 3 and curatorial studies of contemporary art at Sorbonne Panthéon Paris in Paris. Organisations she has worked in include K13 – Košice Cultural Centres (Barracks Kulturpark and Kunsthalle – Košice Hall of Art) and Košice 2013, European City of Culture. She works in the cities of Košice and Bratislava as the artistic director of the international festival of art Biela noc/ Nuit Blanche, which was brought to Slovakia through her initiative. As dramaturge she has contributed to The Return of Water to the City, a site-specific festival in public space in Košice. She has also worked as coordinator of the Oskár Čepan Prize (2016 – 2017). Zuzana Pacáková is a member of STartE, a Paris-based association of young curators, and a member of the international network IN SITU Network, Lieux publics, which matches art with public space.