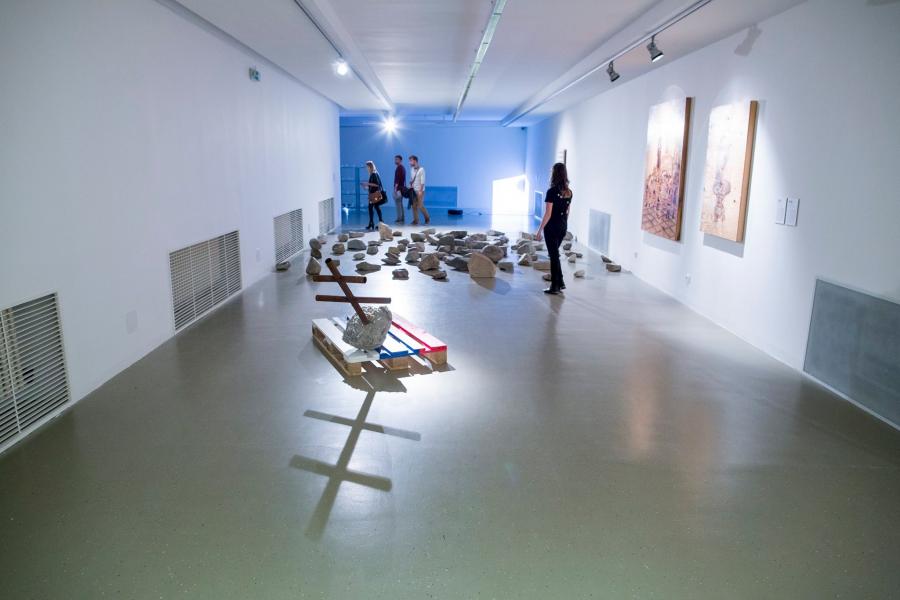 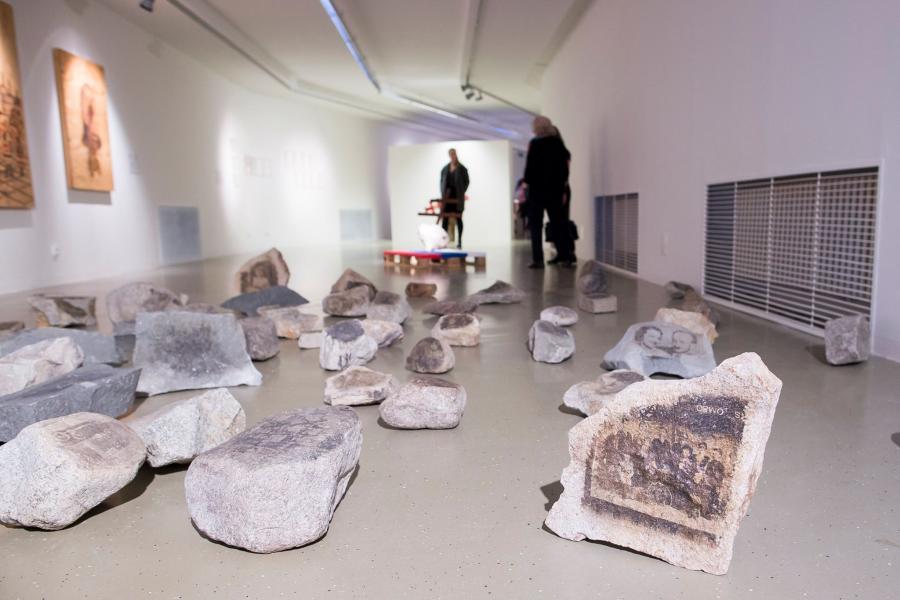 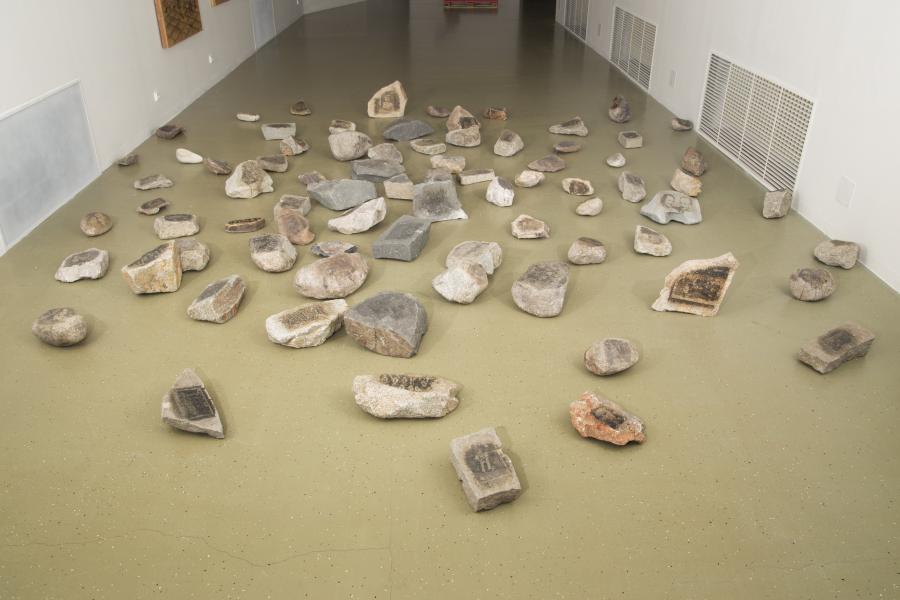 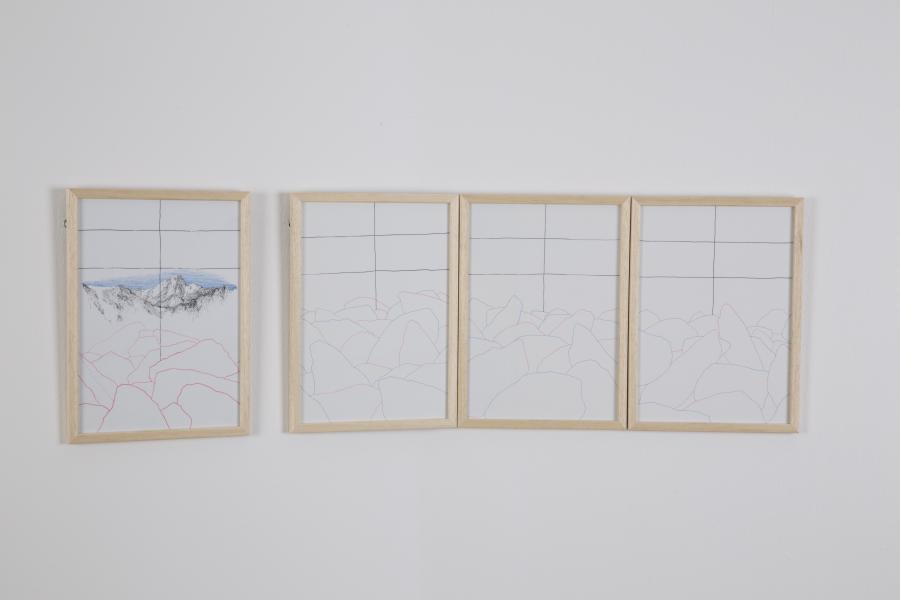 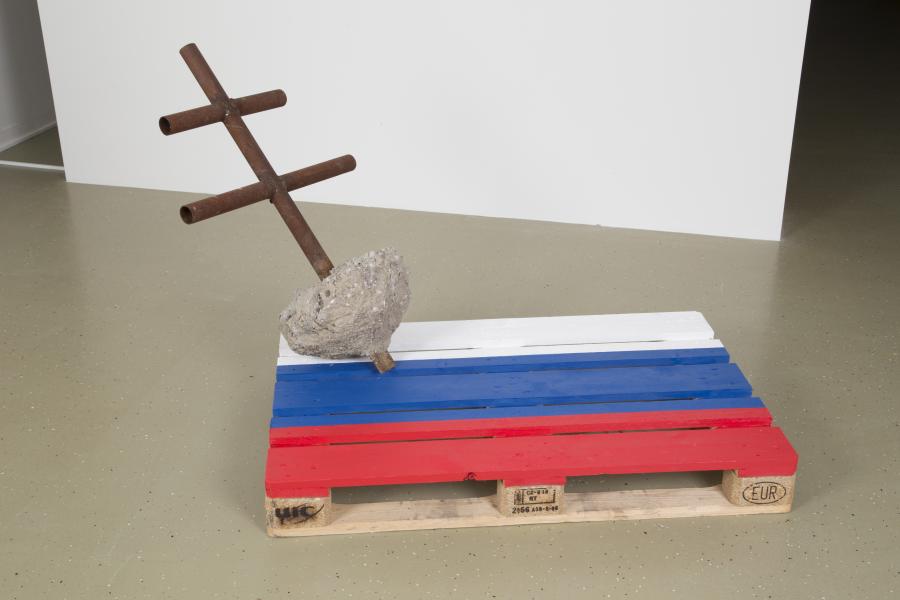 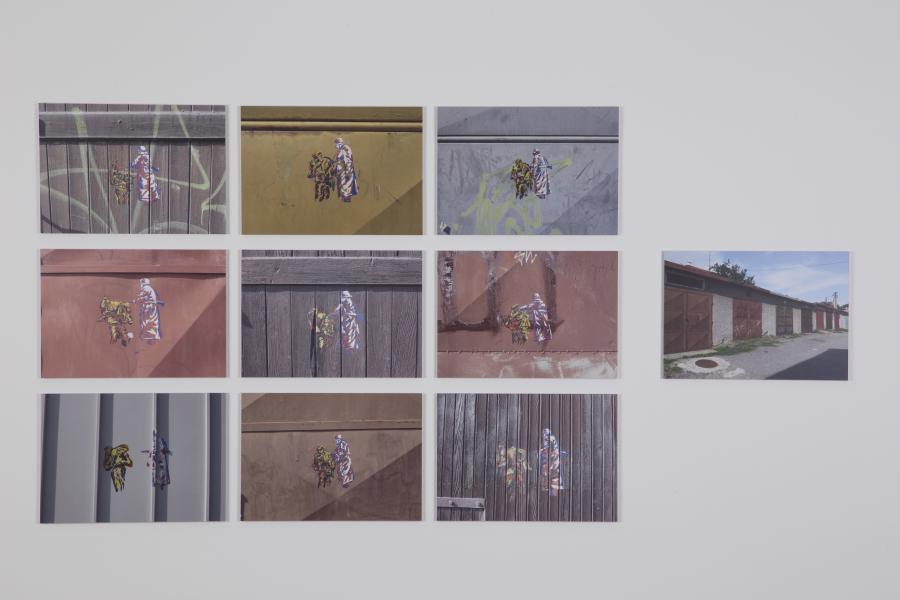 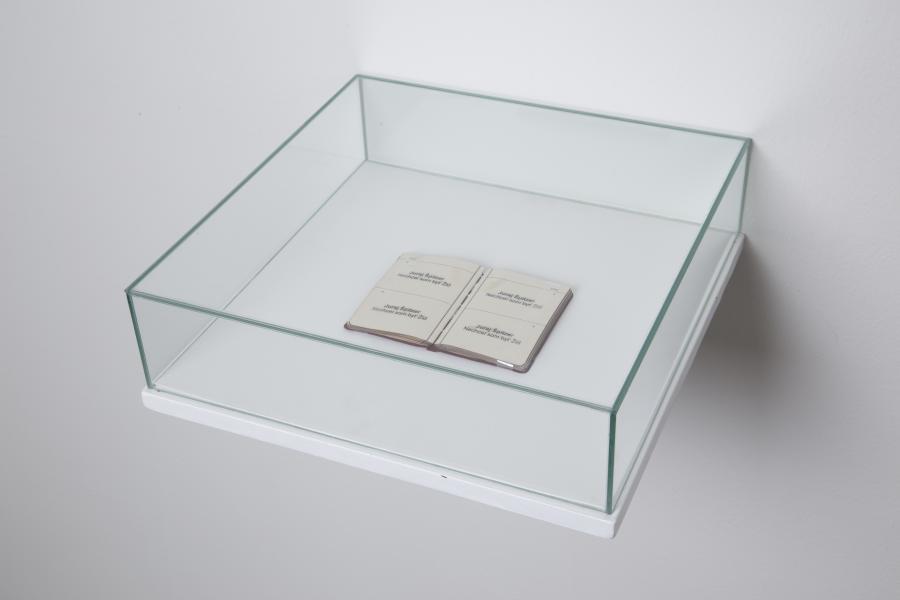 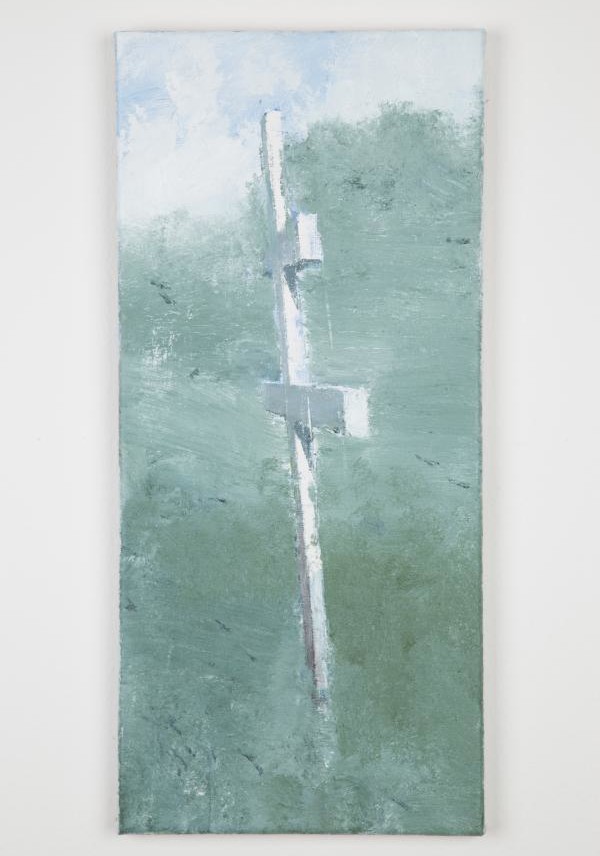 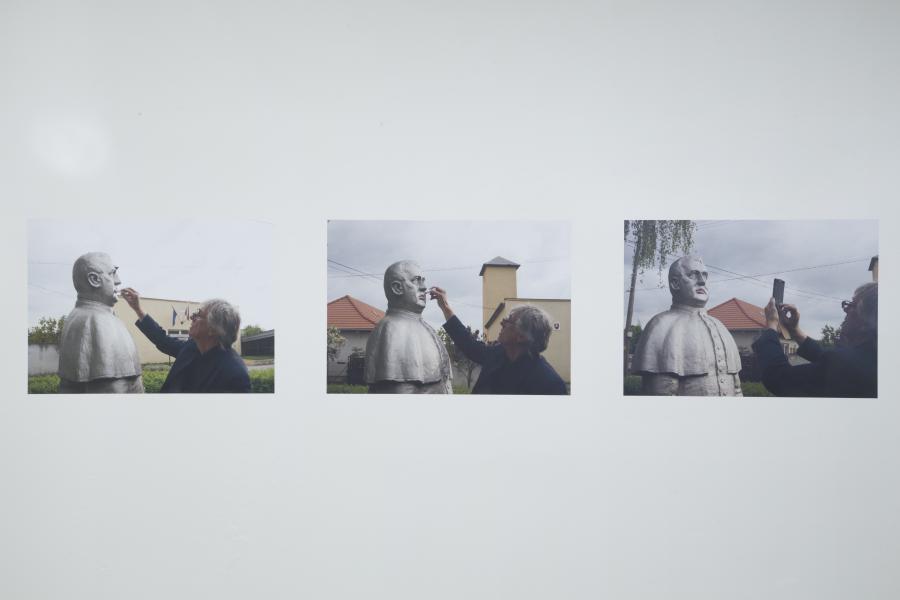 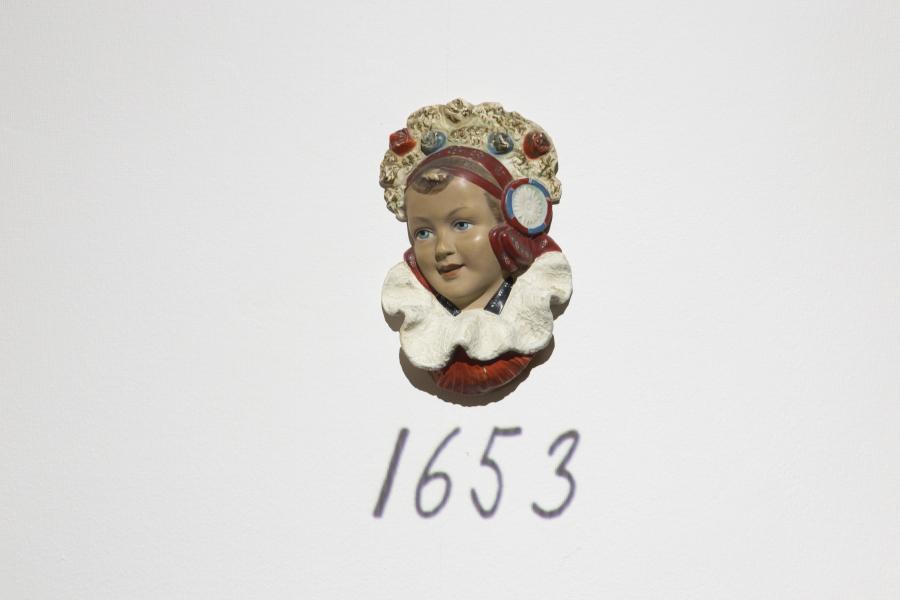 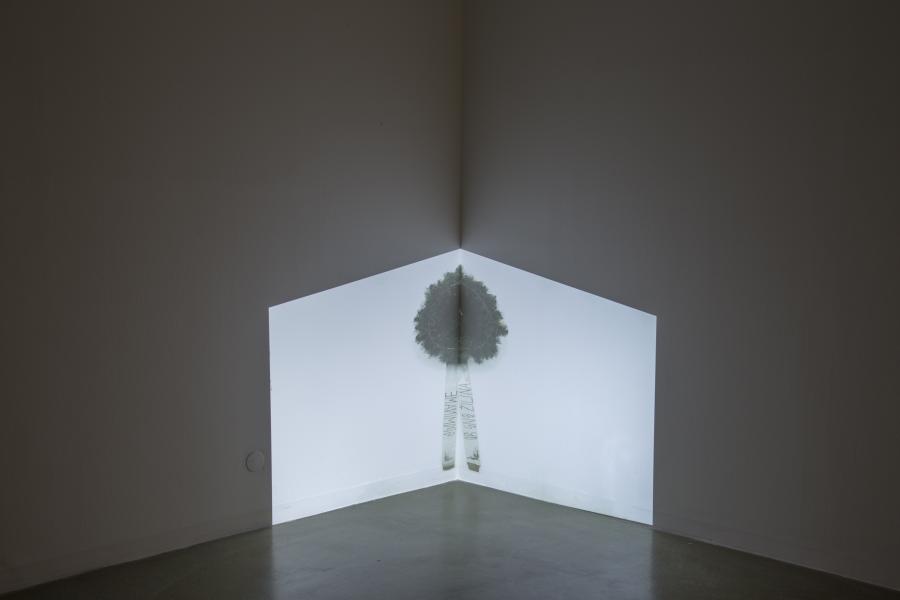 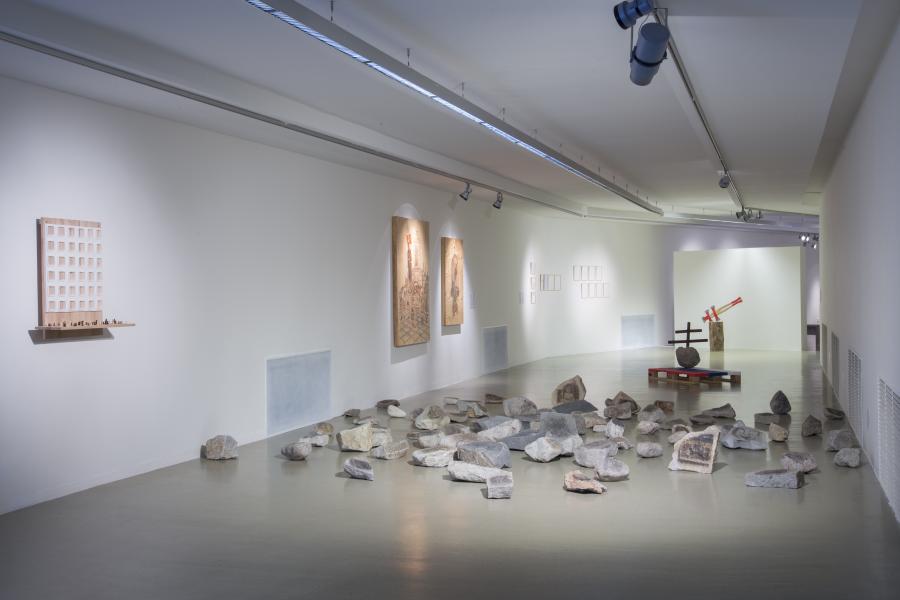 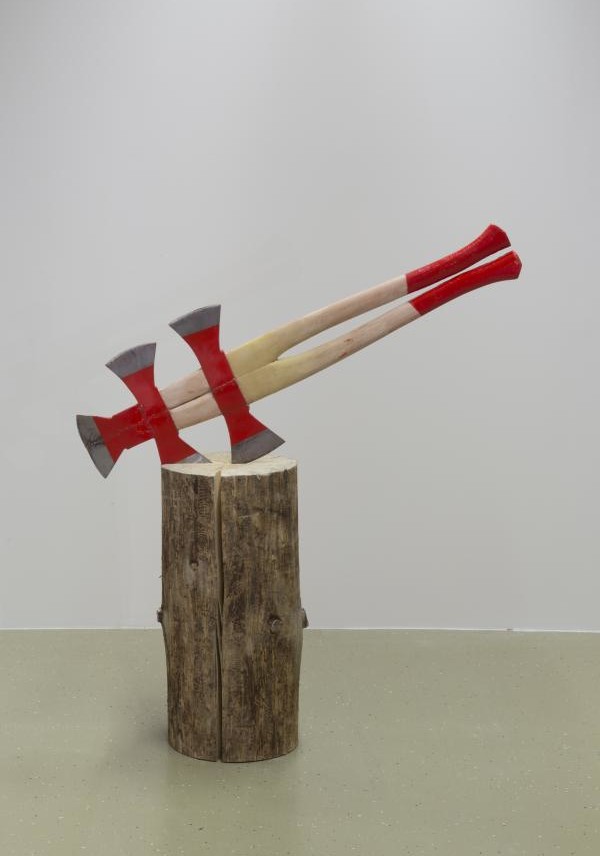 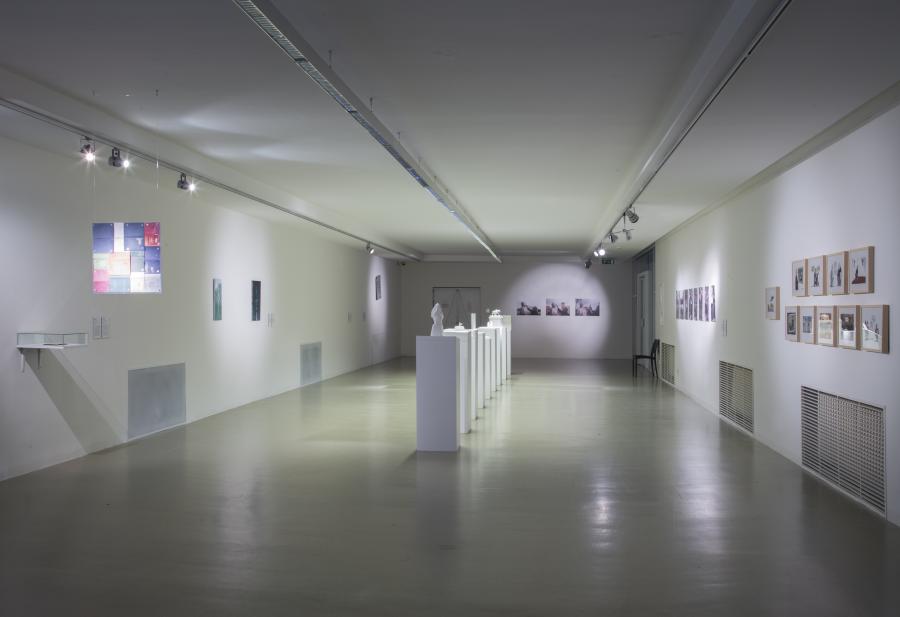 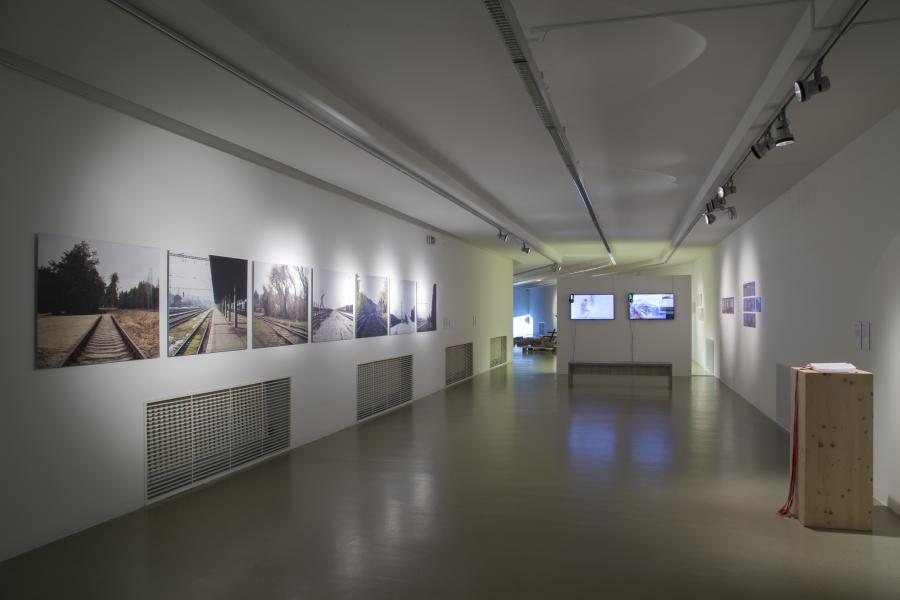 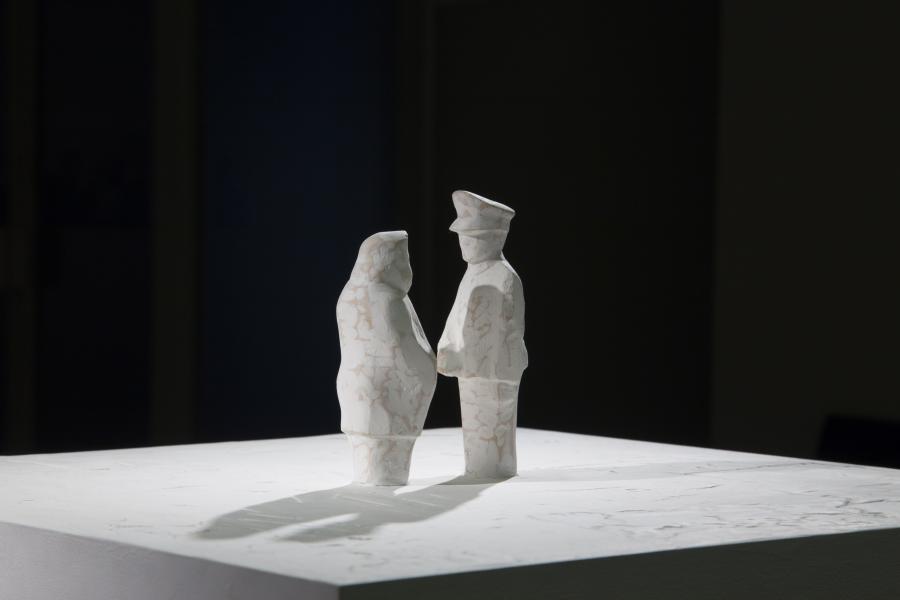 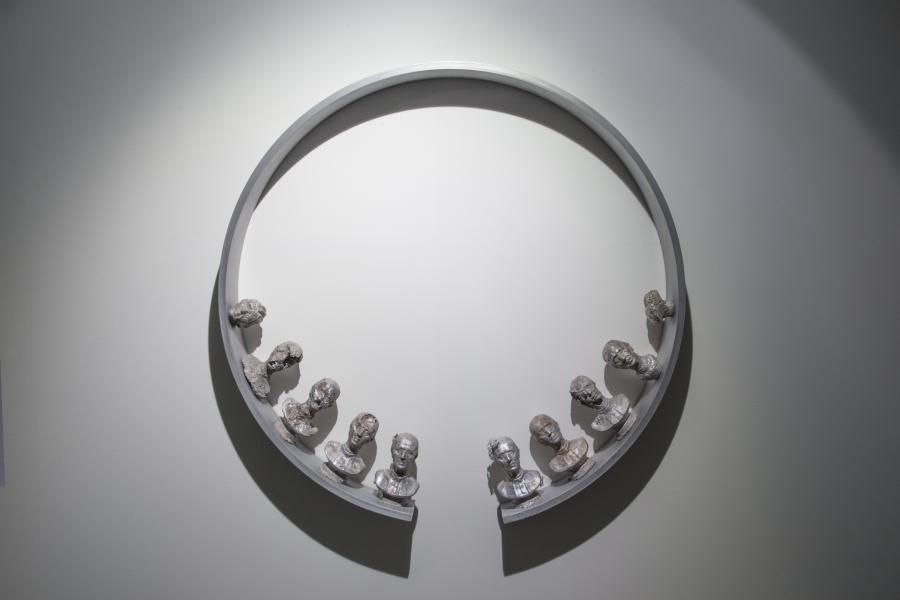 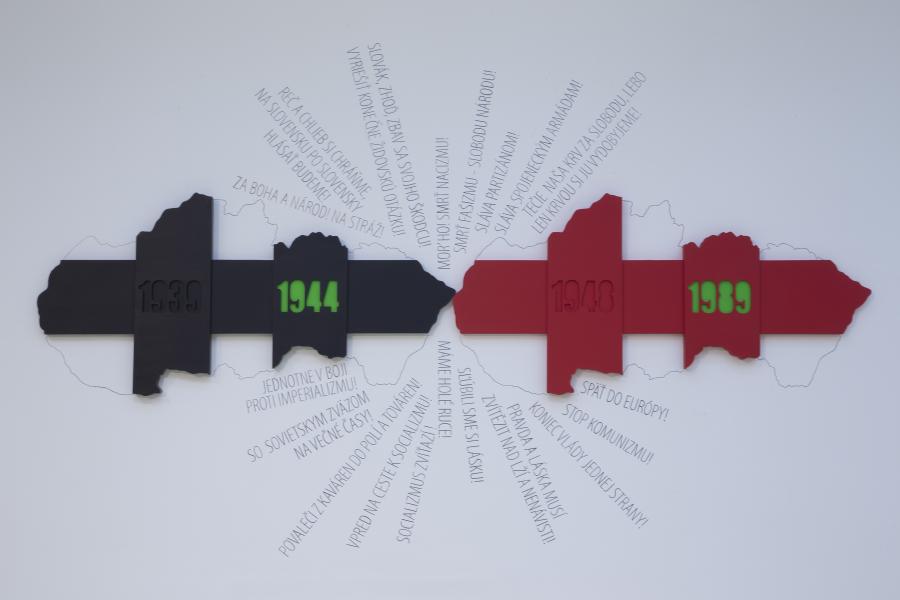 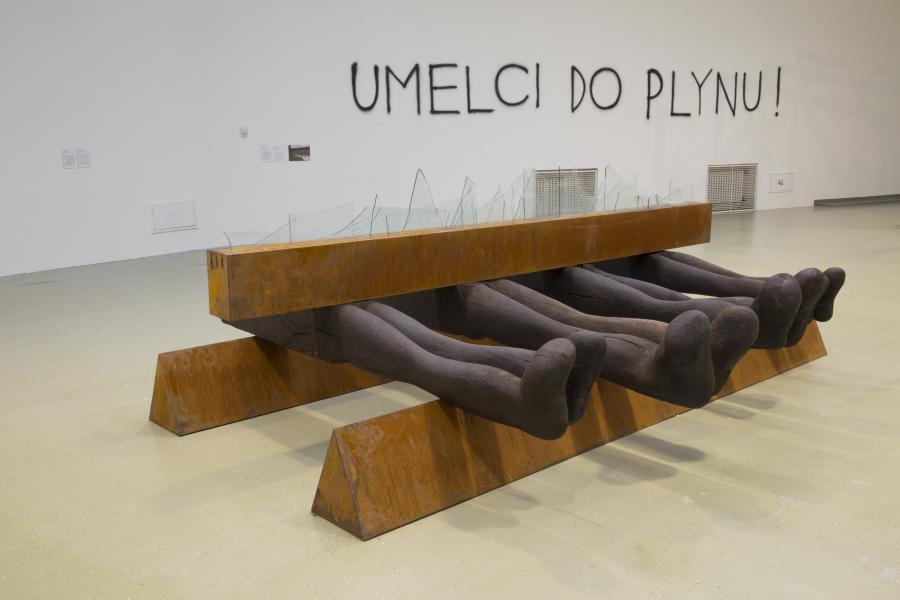 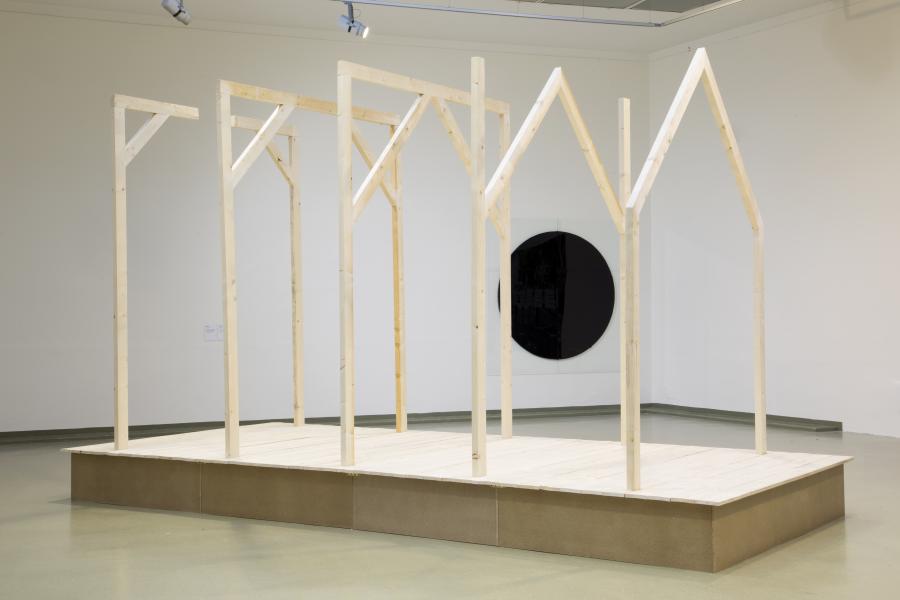 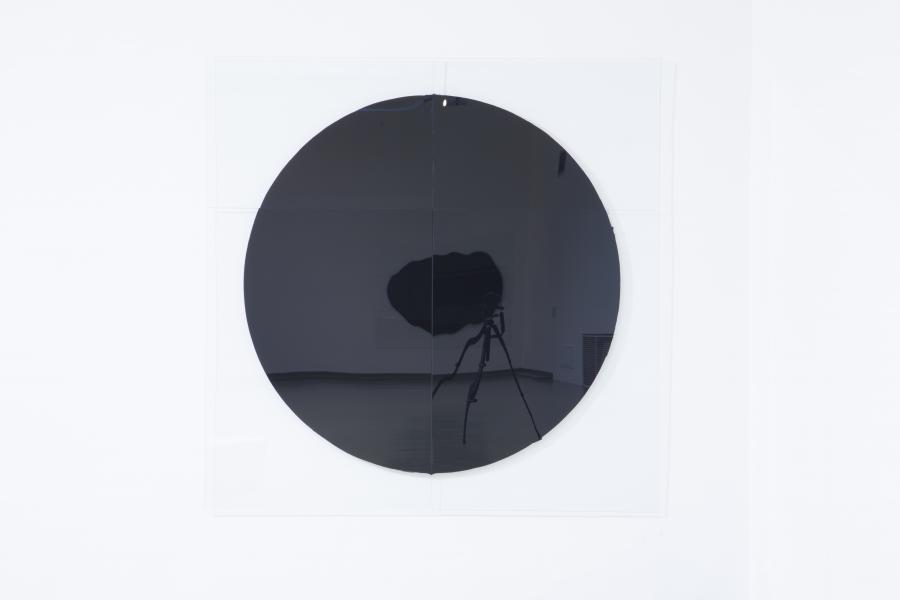 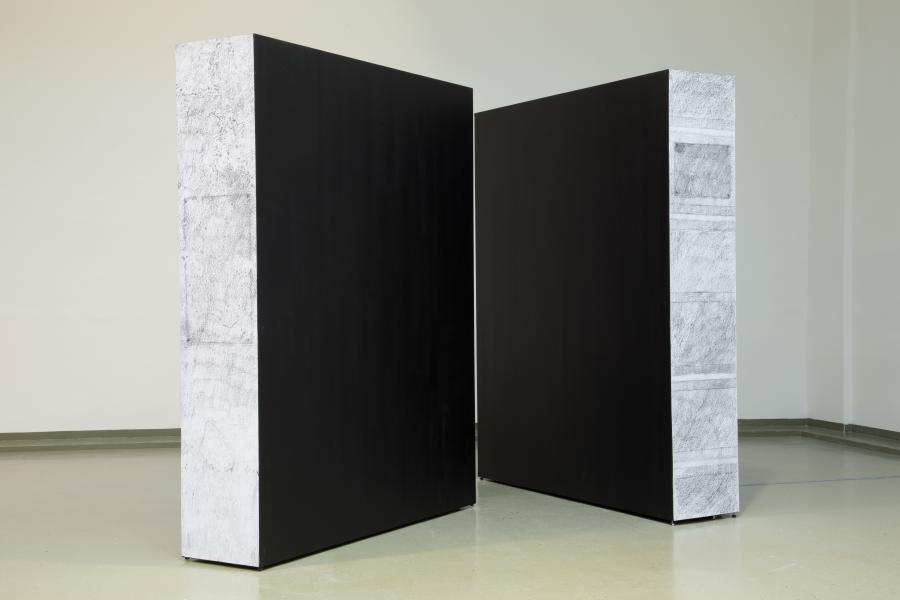 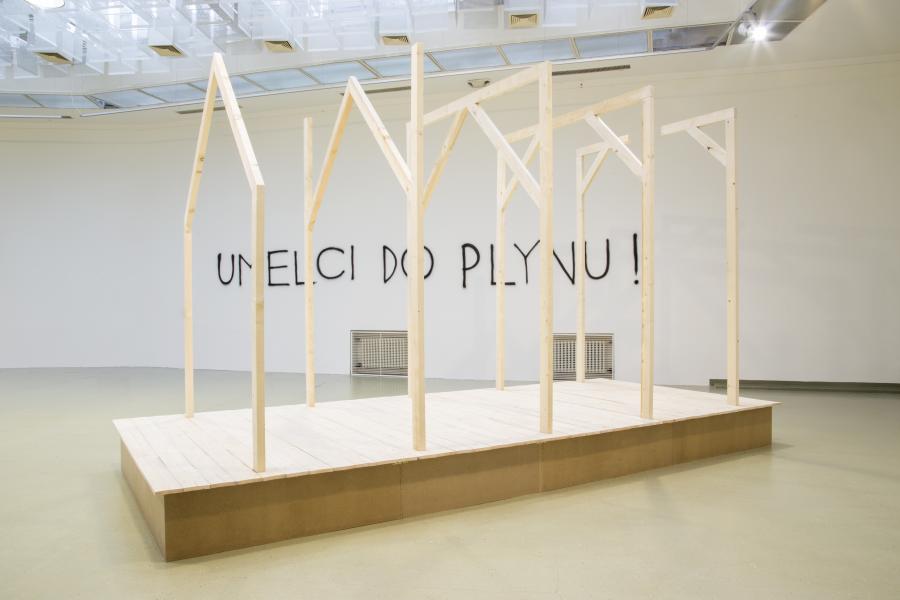 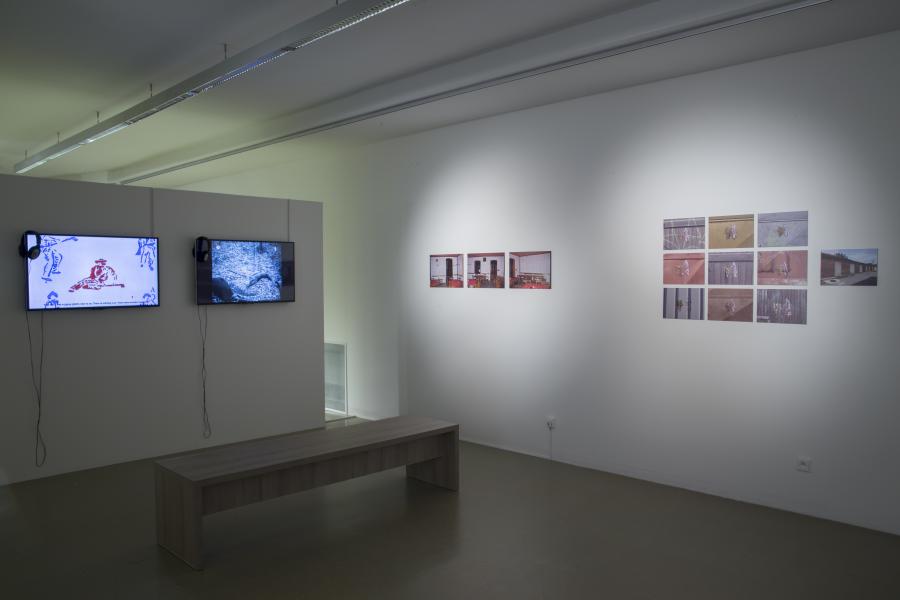 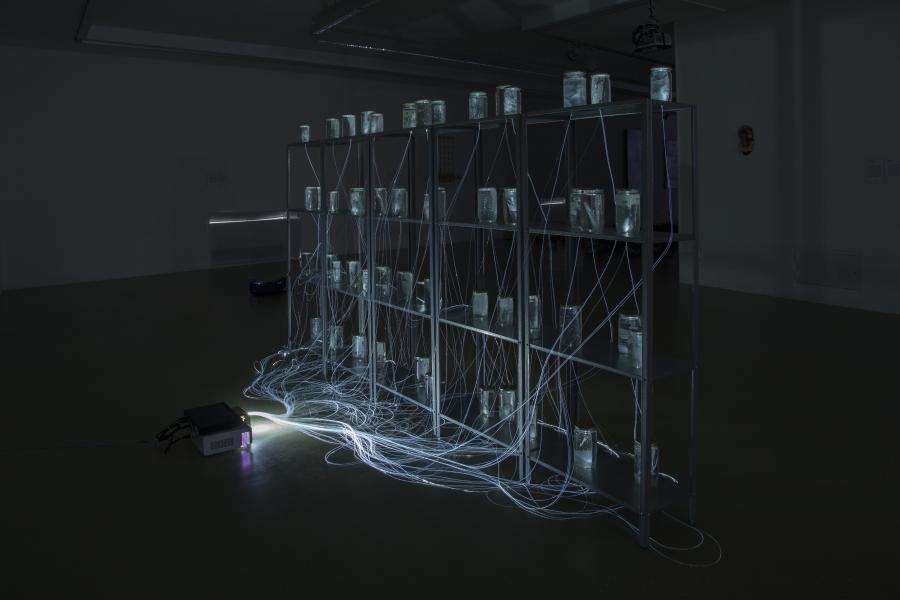 And is it here again? The Slovak state in the contemporary art

In 2012, in Germany, the writer of the German-Hungarian origin Timur Vermes, whose name evokes unexpected associations (from the Hungarian vérmes – temperament, fierce-tempered, excitable), published a novel Look Who’s Back / Er ist wieder da. The book immediately became a bestseller also because it held up a mirror to the present day (and to us therein) in an unserious, but in an all the more subversive and accurate way, leaving behind an unexpected chill.

It showed how easy it is to manipulate people. In the novel, Adolf Hitler wakes up at a football pitch in 2011 and stinking of petrol he passes and devoid of any pretence, he walks through the current free market and marketing approach to life like a knife through butter. Another reason why we have borrowed the title of the Vermes’s book for the exhibition is because the complicated, and actually committed subject matter of the work on the Slovak state topic in contemporary art calls for clarification. The title of the book encourages several possible readings and at the same time includes it in the cultural family of different (good) examples of how to deal with the matter. In our cultural context the historically profaned phrase committed art has been replaced by the more trendy phrase activist art. It, nevertheless, does not fully represent those artistic strategies that do not activate, but rather up-date and become committed while expanding the „battle field“ from different positions, as well as attacking the usual perception of the issue they address. This is the privilege that art enjoys in society and this project will not compromise it.

The exhibition staged at Kunsthalle Bratislava is thematically clearly defined and it also has its dramaturgy logic. It follows up on the idea of the previous projects intending to mediate the then discussed topics (Fear of the Unknown, 2016; Fem(inist) Fatale, 2015;  both of the exhibitions were prepared by Lenka Kukurová).

The need to set up an exhibition dedicated to contemporary art that uses different ways to deal with the topics connected with the reality of the Slovak State and its message emanating for the present day, was articulated by the curator Petra Hanáková already in 2014. At that time it was decided to stage it into the Pisztory’s Palace in Bratislava which, by way of historical coincidence which, from time to time, shows a remarkable sense of irony, was the residence of the German Embassy at the end of 1930s and later the Museum of V. I. Lenin; this would, however, induce the impression of an alternative event within a non-gallery space. Now the exhibition forms a part of the program of a state-established institution  – a fact that in the current public environment has its significance and weight. Nevertheless, it does not mean any obligatory meeting of the government manifesto (in spite of the fact that the Ministry of Culture represents a sector that addresses the topic with apparent seriousness) it is rather an expression of the attitude of the artistic and intellectual circles who feel these topics and – as the exhibition will show – many artists pay these and other topics their consistent and longer-term attention. The listing of such an exhibition within the dramaturgy program of Kinsthalle Bratislava is therefore definitely a result of something beyond just some wish-list of a political material. It shows that the world of art – the allegedly ripped-off- world ivory tower and lately also a coffee bar – has actively been dealing with the topic for years.

The exposed art works were not created on order (with the exception of one adaptation), all of them had been exhibited before or published, and they form a part of the current artistic movement. The curators have selected them with regard to their preferences and interests, e.g. Katarína Bajcurová (SNG) focuses rather on the generation of classics and Bohunka Koklesová (VŠVU – Fine Arts College) pays her attention rather to photographs and media works in such a way that it results in the best that has been created with regard to the the subject. The curator of the Modern and Contemporary Art Collections of SNG Petra Hanáková as well as the Kunsthalle Bratislava curator Nina Vrbanová complete the curating team. The resultant selection has targeted works that, alongside the political charge and the managed complicated issues, can stand up in terms of categories of current reflection of the audio-visual art, i.e. they are not just a „fighting art“. The collection also reflects the present-day possibilities of the involved institutions, in spite of the fact that due to the spatial limitations there is an unexpected number of interesting works that did not manage to make it to the exhibition. Therefore, as it happens in connection with curators‘ topic-based selection there will be works that other colleagues or artists will consider as missing there.

The exhibition clearly shows that also the artists themselves pose similar questions as do most of the citizens: what to do with the heritage of the clerical fascist Slovak State? Should we study it? Are we to ignore or defy it? Should we try to understand it? Or rather be contemptuous of it? Be apologetic? The artists, nevertheless, in the language of art respond to many of the questions and offer (not only) the perceptive viewer not just an experience, but also material for reflection.